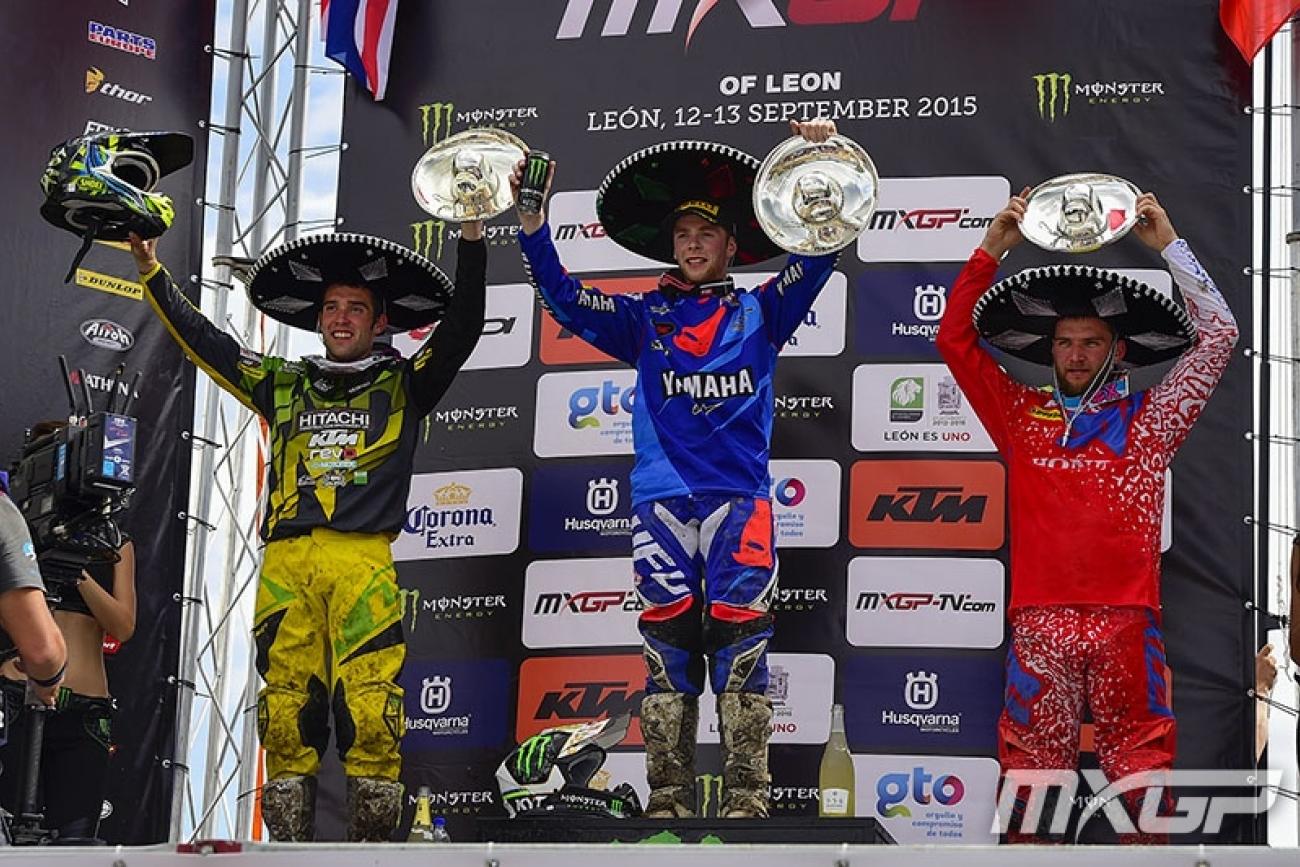 Deep into the 2015 FIM Motocross World Championship—round seventeen of eighteen in fact—and MXGP is still able to throw up vastly contrasting events and occurrences. A prime case in point at Leon in Mexico was the weather and the effect it had on the track. Thanks to unkind showers, conditions veered from wash-out to sun-baked to slushy in the course of forty-eight hours. While newly-crowned MXGP World Champion Romain Febvre dropkicked his laurels into touch by completing a recent two day test on a new electronics setting with his YZ450FM (and was fierce out of the gate as a result, romping to a third Pole of the year, fourth double moto success with a 1-1 and notching twelve podiums in a row), over in MX2 Monster Energy Kawasaki’s Thomas Covington defied the formbook to savour the sweetest taste of first GP-winning success.

Looking beyond a list of results and some action highlights, it’s hard to ignore the rudimentary aspect of the Leon facility—located on a flat piece of land in the city’s main park, a frequent location for joggers and music festivals—and also the sparse presence on the gate. For its second edition, the Grand Prix of Mexico was battered by rain and bad luck. The stormy climate initially created a swampy layout meaning entry and parking on Friday was almost a lottery. Sunshine and humidity helped dry the complex on Saturday but depressingly Sunday dawned wet again and the rain had been plentiful through the night. It made for a static set of first motos where mud and mess ruled and survival was key.

Febvre was absolute in his pace and performance, and behind the champ was Hitachi Construction Machinery Revo KTM’s Shaun Simpson, a dab hand in such technical surrounds. Further back were the HRC Honda’s headed by Evgeny Bobryshev and Gautier Paulin. MX2 carried a wider narrative with Red Bull KTM once more engaged in a tense title duel at Leon. Twelve months previously it had been Jeffrey Herlings and Jordi Tixier sparring to the last. This time Pauls Jonass looked to be slicing HRC Gariboldi Tim Gajser’s thirteen point advantage in a battle of the 18 year olds as the Latvian took Pole Position and convincingly owned the first moto from Monster Energy DRT’s Max Anstie, Kemea Yamaha’s Benoit Paturel (the French rookie impressive with his consistency) and Covington steady and faultless in fourth.

The bad luck for Leon came through the high attrition of the entry lists. Whole teams were missing either through injury or budget concerns or both. The wisdom of closing a Eurocentric FIM World Championship overseas has to be questioned again, particularly when the ethos and structure of MXGP is unlikely to alter and refer to past practices of open entry and funding. Then again it is impossible to predict what would have occurred in Mexico if things had gone differently this season. Instead of the premier class falling to the blossoming talents of the rookie Febvre, Leon could have hosted a three way title dice between Clement Desalle, Antonio Cairoli and Ryan Villopoto, for example.

Back on the track, the Youthstream maintenance crew nailed the level of preparation to create an enticing programme of second motos as blue skies arrived once more and the drying began. Firstly Covington grew in stature and confidence when he passed South African Calvin Vlaanderen for the lead in MX2 and started to construct a margin over Gajser and a pursuing trio of Yamahas with Standing Construct Yamaha pair Julien Lieber and Valentin Guillod, with Paturel behind them focused on nailing down his first top three overall result in his first MX2 term. Late in the race, Gajser was hunting Covington but the Kawasaki rider made a last push to deflect the charge. Gajser was clearly happier with the output from his Honda after admitting the altitude had left the Italian team searching for more from the CRF250RW engine for the rev-happy Slovenian, but was unable to close up to Covington’s rear wheel.

As for Gajer’s championship rival Jonass, things went bad and then worse. Early, Jonass’ slip and fall from the point of a holeshot was a repeat of his faux pas from Assen and the Dutch Grand Prix two weeks previously. The KTM man’s pace to recover from last to sixth was phenomenal and he was looming into Gajser’s shadow when he got the large double around the back of the circuit spectacularly wrong. “I rode at 102 percent and that 2 percent caused me to crash,” he said. “I lost my footing in a rut. I was so lucky.” Chad Reed’s infamous Millville dismount was well and truly beaten in terms of the distance that Jonass flew.

With a bent and broken 250SX-F Jonass—miraculously unhurt—pulled into the pits, lost two laps to repairs but then managed to return to the fray and move from sixteenth to thirteenth and keep some spark to his hopes for a maiden season title. The gap is now 18 points with just 50 to play for this weekend at Glen Helen. Covington meanwhile—first moto overall and moto win trophy in hand—became the sixth victor in MX2 this year and the third to sample a first view from the top step of the box. “I am beyond stoked,” he said. “I did not know I had the overall win until I was walking up to the podium and I asked where I should stand. It is an amazing feeling and something I have not had in a long time.”

The evolving terrain helped produce the goods in the second MXGP moto that served up a riveting battle behind Febvre between Bobryshev, Paulin, Yamaha’s Jeremy Van Horebeek, Rockstar Suzuki’s Glenn Coldenhoff (who had crashed out of the lead early in the first moto to make Febvre’s job easier), a distant Red Bull IceOne Husqvarna’s Max Nagl and the presence of British Champion Simpson who passed all of the above to go 2-2 and celebrate a third podium finish from the last four rounds. “I was just thinking ahead,” the Scot said of some close but measured overtaking. “Motocross is about using your brain and not just about riding wide-open over waves and jumps. As a rider you should be able to select the lines you want and that's what I was doing. I was looking for the best grip on the track. I really enjoyed it.”

Febvre was gone and his Motocross of Nations teammate, Paulin, looped out of the dispute for third place with Bobryshev. The HRC pair are still close in the championship chase for the number two plate. Paulin shades it by just 27 points as the Russian took part in his fourth podium ceremony of the year.

The teams that came through the weekend were busy hosing and cleansing race machinery and tools with perhaps more diligence than usual on a Sunday evening mindful of the need to efficiently pack the freight crates for the trip to California and Glen Helen this week. The third Monster Energy U.S. Grand Prix this decade again drops into San Bernardino and with the promise of more AMA participation thanks to names like Jason Anderson, Marvin Musquin, Christophe Pourcel, Cooper Webb, Josh Grant and more. The actual riders that roll into the paddock to compete will probably not be known until this coming Friday but there seems to be a decent chance of a better mix of the two scenes compared to the previous editions in 2010 and 2011. One thing is for certain: almost all of the active MXGP protagonists are rubbing their hands at the prospect of ending the world championship at Glen Helen. The length and variety of the layout means it has previously been a popular stop and will be again for the GP circus.