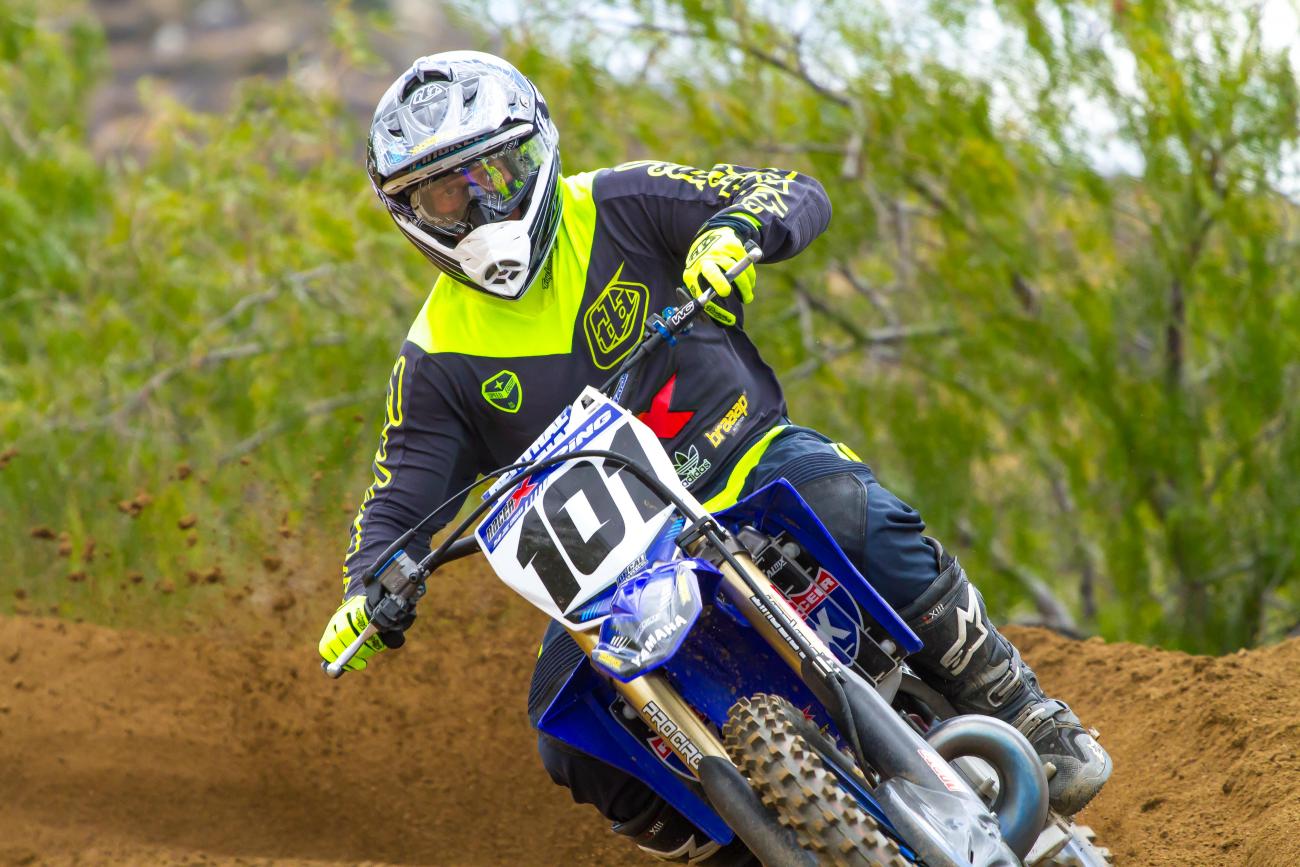 I've wanted to write on multiple occasions, but it's taken an event that truly changed my perspective to get me to actually do it.  I apologize for the length of this email, and totally understand if you can't use it for your column because of that, but I feel the need to get this information out and detail my experience.

So last week I was taking my two boys out to Scout Camp.  I live in Federal Way, WA, and the camp was out on the Olympic Peninsula - Camp Parsons (Oldest still running camp west of the Mississippi actually).  We stop in a little town called Silverdale on the way at a Starbucks to get some breakfast early Monday morning - like 6 am early - and when I walk in the first person I see is Ryan Villopoto!  I was a bit shocked, then kind of star struck, but mostly just surprised...here's a guy that's won everything on the biggest stage in one of my two favorite sports (the other being ice hockey) and he's just chillin' in this Starbucks with his wife and some other guy...and nobody there besides me seems to know who he is.  Kind of blew my mind.

But first, a confession...when he was racing, I was only cheering for him twice: At his last MXdN appearance, and this year when he was racing the GP's (I wasn't watching pro racing prior to 2009).  Who knows why people end up cheering on the different racers out there, but I generally was always looking for someone other than him to win when he was racing.  On TV and in the moto media, he didn't seem to like what he did, his interviews were hard to watch, and it's easy to not cheer for the guy that dominates so much. Now that I've met him, if I were to go back in time I'd be a huge fan and cheer him on each and every race.

He sat down in the Starbucks as I walked him, and I looked at him and recognized him, and he looked at me with a look that said it all - here's a guy who knows who I am.  There was a bit of apprehension in his look as I'm sure this isn't the first time or the last he is recognized by a total stranger when he's just doing his own thing.  I have never met a professional athlete (or any kind of celebrity really) before, so I don't know what the protocol is - I just say "Ryan?" in a Ron Burgundy sort of way, and he says "Yeah." Then it was weird - weird because here's a guy that I know a whole lot about because I read about him in the moto media and I've watched him race on TV for years, and I have a ton of questions for him and could just jump right in, yet he doesn't know me from a hole in the wall.  Being the bit of an idiot I am I just started talking and asking questions like he was an old friend I haven't seen in forever, and here's why I would now be such a big fan - he responded the same!  He just talked so easily, and we chatted for a good 10-15 minutes.  He's at Starbucks enjoying himself, enjoying time off, and he took the time to talk to a total stranger about everything - we talked GPs, US Nationals, injuries, his last things he is doing for Kawi to fulfill his contract, and then the thing I think he wanted to talk to the most about - fishing!  See he didn't just answer questions I had for him, he asked questions to me - and he was genuinely interested in what I was doing.  It really did feel like two old friends having a chat after a long time not talking.  It was both totally normal feeling and very weird. But what a class act!  How cool is he for being that way?  And this felt totally normal for him - this felt like who he really is...not the guy on TV giving interviews I didn't like watching or reading.  It's been a week since then but I seriously can't get over how cool he was.  He doesn't owe anything to anyone but he's super down to earth and incredibly cool all the same. I was bummed when he pulled out of the GP's, I thought it would be something he would regret later. I was disappointed when it didn't seem like he was really there to win like when he raced here.  But after meeting him and talking to him - man, screw the old me who thought that!  He totally deserves what he has, and to end it how he wanted, and to go fishing for the rest of his life.

As we were getting ready to leave, I ask for a picture with him and my kids and he's totally down for that.  I was always impressed with his abilities as a racer, but those 15 minutes - he's more impressive as a person, and he's a guy who doesn't have to be, which makes it all the more so.

Now that I write all these thoughts out, I realize maybe it's better if this doesn't get out, otherwise he'll be mobbed by dorks like me every time someone recognizes him somewhere.  But I feel like the media version of him didn't portray him well (not that it is the fault of the media or him or anyone else - sometimes things just don't translate and I get that), and I wanted to tell someone that.  You probably already know it, and in fact I think I remember reading one of your Ask Ping's where you said as much.  Anyway, he's a cool guy - I can verify that!  Do with this email what you will - maybe it's the longest you've ever received?  Maybe I can get a prize for that?  I'd like a new Husky 250 or 350 please.

I can't help you with the new Husky, but you definitely win the award for longest correspondence. I posted it anyway because I think it proves a very important point about many riders, including Ryan. Let's just be real: RV was one of the worst interviewees we've seen on the top of the podium in a long time. For whatever reason he just couldn't/wouldn't open up and be himself when the cameras rolled. His talk was robotic, canned, unemotional, and boring at best, and at times he failed to even answer questions, but instead just roll right into a list of sponsors. If he was really a stick in the mud with no personality it wouldn't have been so frustrating but Ryan is actually a very nice guy with a great sense of humor, as you've now seen. I think Ryan compartmentalized his personal life and his professional life, and he was either in one zone or the other with no blended middle ground. At work he was all business and it was all about doing his job, fulfilling obligations, and winning races. That Ryan was incredible on the track but about as interesting as a five-gallon bucket of dirt. The Ryan at home loved to talk smack and joke and laugh… and fish. It's a bummer most folks won't get to see that side of him, but I'm glad you did and you got to share your experience.

I don't like riders being allowed switch back to spring forks. This is where the production rule would make sense. How will the air forks, which I hate, improve if the top riders don't have to use them? What's good for the goose is good for the gander.

What is all this negativity, Al? How could you hate the air fork? This modern marvel, which was pioneered back in 1976 by Yamaha, is taking front-end motocross suspension to a whole new level! What, you don't believe the marketing hype? How cynical of you. The air fork is cheaper to make and a couple pounds lighter, so the fact that it isn't as consistent or doesn't have the same feel that a spring fork provides is inconsequential. The good news is that you no longer have to re-spring your bike if you fall outside the target weight for that particular machine; you can adjust it with air pressure right on the stand. The bad news is that you'll have to re-check that pressure (and the pressure in the balance chamber) before each and every ride. And while the fork has more options to fine-tune the setting, a common complaint is that a setup that works well at one track doesn't work well at another. Here are your options: You can piss and moan about it all day long like an incompetent jerk. Or, you can try to adapt to the new technology like your parents clumsily transitioning from their beloved flip phones to FaceTiming you in the middle of the day to tell you they opened a Snapchat account. In other words, you get to choose between a crap sandwich and crap stew, but either way you are taking a bite. The best tool I've found for understanding and setting up the Showa TAC fork is an app called Showa SFF Air. You plug in your bike, weight, and information, and it gives you a starting setting with a sliding graph that shows how increases or decreases in pressure would affect the feel. I wish I had advice for dealing with your parents’ Snapchat account, but you are on your own there.

As far as the production rule, I agree. I think every rider should have to use stock outer tubes, at least. The cost of factory suspension is way out of a privateer’s league, and it makes a huge difference. Also, why can't 250 two-strokes compete in the 250 Class again? That confuses me.

Big fan of your segments every week… My question has to do with something you don't hear a lot of discussion about but I have always wondered how this is handled on factory teams. When a rider is injured/out for a significant amount of time (Tomac, Zack Bell, JS7 etc.) what then happens to their mechanic if all of the teams other riders already have mechanics. Do they still receive a full paycheck because they are salary/contracted or does a mechanic hate to see their rider go down even more because it means their profit goes down along with their rider? Thanks for the input.

Pretty much all mechanics on legit teams are contracted labor and have specific terms in writing. Their pay doesn't change, but their duties definitely will. Without bikes to build and service, they are relegated to shop grunts and wind up doing really stimulating tasks like sweeping, ordering parts, organizing the shop, or maybe even going to amateur races for rider support. The teams have the right to assign them duties since they are paying their salaries. And while the base pay doesn't change, having an injured rider for a season can greatly alter the overall income for a mechanic. Most wrenches have deals with their guys for top-three or top-five bonuses. If your rider is winning, you can put some serious loot in your pocket…possibly even double your salary if he is a championship contender. So, while it sucks for the rider to have to endure the pain of healing and rehabbing his broken body, his mechanic is stuck in his own little hell cleaning the toilets at the shop and making an inventory of all the nuts and bolts in the toolboxes. Here's to no more injuries for a long time.

Have a question for Ping? Email him at Ping@racerxonline.com.