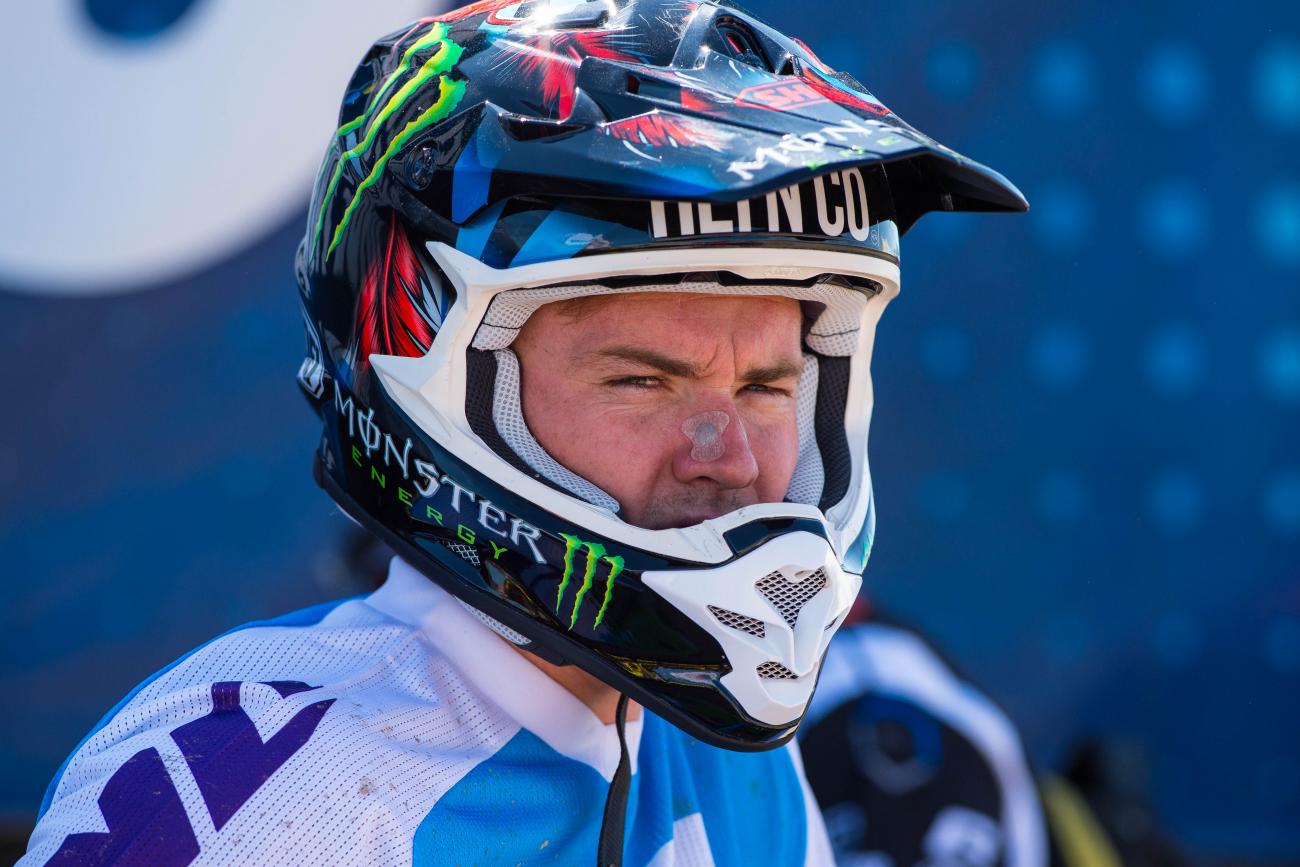 Think it's too late to join in on the fun? Nope. We have new comps weekly. New prizes are available every week, and this week, Troy Lee Designs will be awarding prizes (see below) to the top three in both the 450 and 250 classes. It costs a mere $4 to be eligible for weekly prizes, so get on it!

The Canadians are Coming

The final round of the Rockstar Energy Drink Motocross Nationals in Canada took place last weekend at Walton Raceway in Ontario. Matt Goerke clinched the MX1 title in dramatic fashion, while Kaven Benoit, who had already put the MX2 title on ice, took the overall ahead of Americans Joey Crown and Jimmy Decoits. The floodgates have now opened and an influx of Canadian riders are descending upon the final round at Ironman—greatly impacting fantasy.

While I’ve followed the series this year, I’m no expert. So, I emailed Billy Rainford, an editor at the Canadian site DirectMotocross.com (check them out—they are great), for a scouting report on who is coming down and what to expect.

Colton finished second overall in the MX1 class. It came down to the final round last weekend at Walton Raceway between him and Matt Goerke for the title. They both went down together in the second turn of the final moto. It was intense as they both worked their way through the field. In the end, Colton finished 6 points back of Goerke.

Jeremy had two bad weekends this summer in the MX2 class compared to Jimmy Decotis, who only had one. That was the difference between second and third in the 250 championship behind an unbeatable Kaven Benoit.

Kyle buckled down with his training over the winter and it showed this summer, as he simply wore down his competition and moved steadily forward every moto. He finished with a very impressive eighth place in the MX1 class while also running a very busy business in his spare time.

Riding a Honda 450 this weekend instead of the KTM 450 he raced all summer.

Robinson finished twelfth overall in the MX1 class this summer. Shawn has never lined up for an AMA National, so this will be pretty exciting for him to even make the motos.

Kaven was basically unbeatable this summer on his KTM 250 two-stroke in the MX2 class. He will now be forced up to the MX1 class for 2016 as two-time champion. He will be racing Cole Thompson’s back-up 450 KTM race bike this week.

Tyler was always the "next guy" after the top four in the MX1 class. He managed to grab two third place overalls in the very stacked top end of the MX1 class. He gets great starts, which should be a big help this week in Indiana in this field. He also has of international racing experience, so the big stage is not an issue for him.

Eric finished seventeenth this summer in the MX1 class. His best overall was sixteenth at the first round in Kamloops. The team will have their big rig there in support of Eric and his sixth-place MX1-finishing teammate Cade Clason, who is also competing this weekend on the #92 KTM. This will be a great experience for the young Oshawa, Ontario, rider.

The Canadians listed above are sure to make an impact this weekend, but they won’t be the only ones. Check out a few more 450 sleepers.

Sipes, now a full-time GNCC racer, could sneak into the top ten this weekend. In the prior two races he’s competed in this year—Tennessee and High Point—he finished 12-10-13-13.

The 2015 AMA Horizon Award winner finally makes his debut after sustaining a concussion prior to Unadilla. Bloss, standing well over six feet tall (closer to 6’5”) is an imposing figure. He’s entering a stacked class this weekend, but should contend for a spot inside the top twenty.

Before leaving for Canada, where he finished sixth overall in MX1 (450), Clason raced the opening two rounds of Lucas Oil Pro Motocross. While he failed to reach the top twenty (he went 31-23-32-28 at the opening rounds), keep an eye on him in practice.

Brooks was out last weekend, but returns for the finale. The privateer has scored points in eight motos this year, including a pair of fourteenth-place finishes at Spring Creek.

The snocross champion returns to Lucas Oil Pro Motocross. Hibbert has raced professionally since 2000, with a couple top-twenty moto finishes on his resume. He finished twenty-second overall at Washougal last year with a nineteenth in moto two, so keep an eye out on practice to see where he stacks up.

As I said last week, I don’t put much stock in a rider’s first race back. Nerves, fitness, and rust are just too much to overcome sometimes. Now that Trey Canard, Dean Wilson, and Justin Bogle has two and three races under their respective belts, we should have a better gauge at how they’ll perform this weekend. I’ll throw myself on the sword and make some predictions for Saturday.

Canard is hard to gauge because, while he certainly has the speed to podium and even win, I don’t know how hard he’s wanting to push so late in the season and coming back from another injury. I thought his comments after Unadilla, where he podiumed, were telling: “It’s hard for me to really want to hang it out and take those risks when I’m only my second race in. I know in prior years I’ve made those mistakes and got hurt again. I’m trying to just be smart about it and let it come.”

Canard has too much talent to not contend for the top five, so while he may not risk pushing the envelope for a podium, he’s a solid pick.

I’ll be the first to admit I was off last week in regards to Wilson. His second moto was impressive, and showed his fitness is good enough late in motos to contend. I’ll now remove my foot from my mouth.

Wilson should only improve—but not enough for the top five, in my opinion. I think 7-10 is good starting point.

Bogle’s fitness just doesn’t seem to be there quite yet. He’s certainly fast enough, but I just don’t think he’s strong enough down the stretch to guarantee a top-ten spot. Just outside the top ten is a perfect landing spot for the GEICO star.

While the Martin vs. Musquin championship battle will take precedence, there is still plenty on the line in 250MX. Translation: No one is mailing it in. Let’s look at some of the storylines.

While Jessy Nelson (22 back of Joey Savatgy) and Alex Martin (23 back of Savatgy) are still mathematically alive, third in points figures to come down to Zach Osborne and Savatgy. Osborne rebounded from a tough stretch last week and shaved 2 points off Savatgy’s lead. Savatgy enters the weekend 5 clear, and has been riding better, with four top-fives over the last eight motos, compared to one for Osborne.

Fantasy Prediction: Savatgy. Savatgy has a lot to fight for and had success here last year. Top five is a must, while Osborne is a good top-ten pick.

Fantasy Prediction: Toss Up. Since Washougal, the two have been basically the same rider. During the span, Nelson has averaged a 7.3 moto finish to Martin’s 8.6. Both should be inside your top ten.

McElrath vs. A lot of People

Shane McElrath is clinging to eighth in the championship, but his footing is certainly not on solid ground. Matt Bisceglia trails by 3, with Cooper Webb (seven back) and RJ Hampshire (eleven back) also in the mix. Webb is the clear favorite, but all three have been solid top ten picks over the last two rounds.

Fantasy Prediction: Webb. His six podiums over the last eight motos speak for themselves. McElrath holds on for ninth, while Bisceliga outlast his teammate to steal the top GEICO spot. All four finish top-ten overall.

Race X League Standings (After Round 11)

We will be giving away weekly and grand prizes for Fantasy Motocross. New prizes are available every week, and this week, Troy Lee Designs will be awarding prizes to the top three in both the 450 and 250 classes. It costs a mere $4 to be eligible for weekly prizes, so get on it!