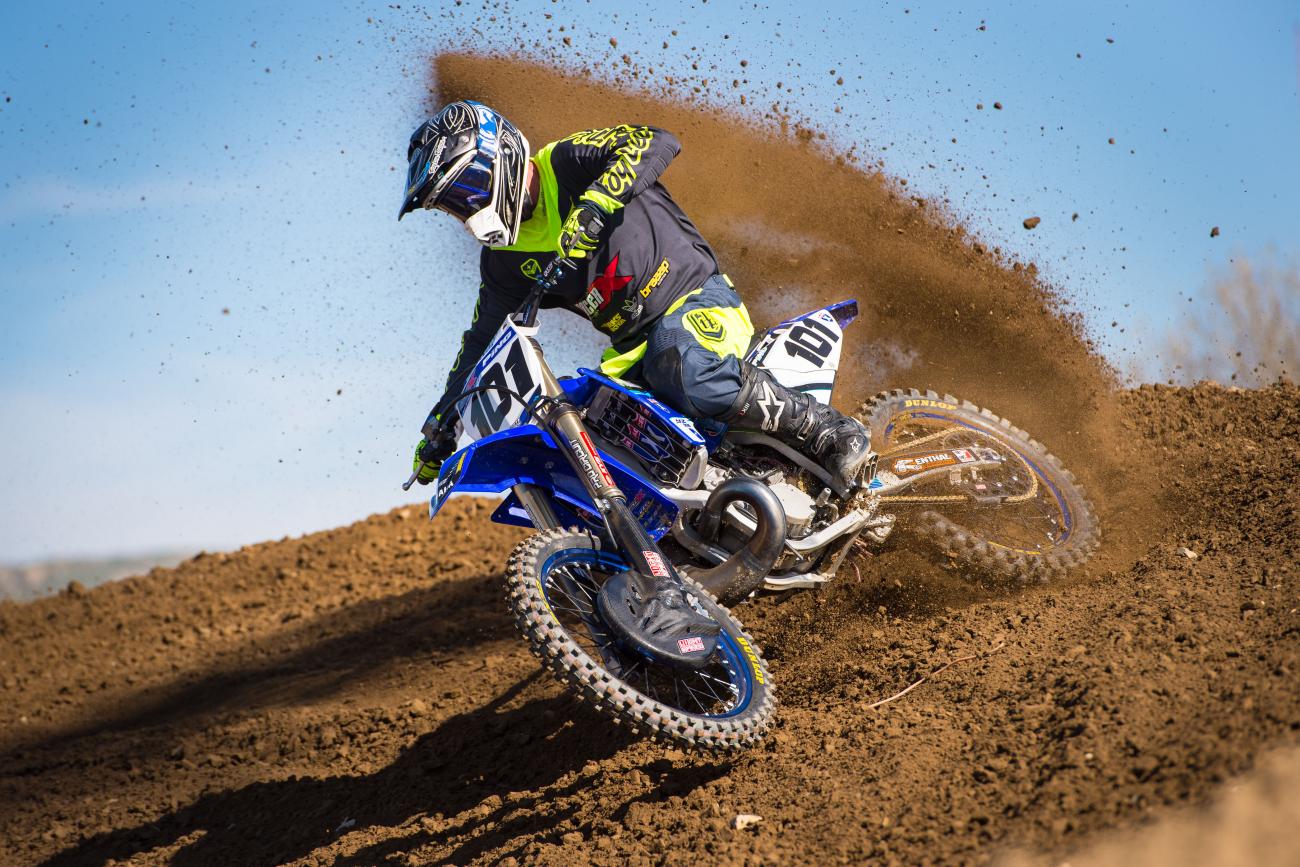 Yesterday we reacted to the news of Ryan Villopoto's retirement via our 3 on 3 feature (and what seems like one hundred other posts), but we wanted to Ask Ping ourselves. So here are the same questions, and then we'll return it to your regularly scheduled Ask Ping.

1. It's early to start writing history books, but where does Ryan Villopoto's career rank all-time?
It's very difficult to say because in our sport we have two very different disciplines of competition. Jeremy McGrath is the best supercross rider ever and Ricky Carmichael is the best motocross rider. Period. But trying to compare different eras and competition levels and all the other variables is difficult at best. I would say that behind RC and MC come a list of guys that include Ricky Johnson, Johnny O'Mara, Bob Hannah, Roger DeCoster, Stefan Everts, James Stewart, and the only guy to ever win every single U.S. championship, Jeff Ward. I don't know how Wardy got left off the other guys' lists. The real bench-racing starts when you add in Villopoto and then try to list these guys from third to tenth because you could make an argument for any of them. Injuries, competition, grit, determination, and the scoreboard are all factors you have to consider. We could argue all day about the ranking of these guys, but the simple fact is that RV is now cemented in the moto history books as one of the all-time greats. The most interesting part is that he probably couldn't care any less about the records and the history books. That's just the way Ryan is.

2. It's hard to make any retirement announcement perfect, but how would you have handled this?
I'm not sure who has been handling his PR the last couple of years, but they haven't done a good job. From the flip-flop with the Nationals last year to his plans for 2015 to this weak retirement announcement, his camp has been dismal. It's obvious Ryan didn't want to race in 2015, but Monster flexed and wouldn't let him off the hook. He half-assed his way through the first handful of GPs before blowing out his rear end, and it's been radio silence ever since. This sport has a bizarre history of trying to keep everything quiet, even when a little bit of the truth would be easier and better. Ryan's retirement email seems a little disingenuous to me, but maybe he'll open up in the weeks to come and explain some of the things that have led up to this.

This felt a little bit like breaking up with your girlfriend via text message. How would I have handled it? Well, if I were Ryan Villopoto I would have called a press conference in Vegas, rented a private jet, and showed up in a $2,000 suit drinking champagne because I would be drunk on power after looking at my bank account. He could have held a meeting with the press at the next GP or even at the next national back at home and made the announcement in person. He doesn't owe that to anybody, but it would have been the classy thing to do, and he would have gotten a hero’s welcome and sendoff.

3. What do you think RV's future is from here? Will we see him at races again?
After he finishes his obligation with Kawasaki and Monster, this guy is going to disappear into the woods only to pop up every once in a while in a blurry photograph like a Bigfoot sighting. Ryan doesn't care about the hoopla, and he doesn't need to have his ego stroked by folks who want an autograph or want to tell him about that one time they came to a national that he won. If you want to see RV you are going to have to rent a boat in the Pacific Northwest and hope to see him fishing.

As much as we all love racing at the end of the day what were watching is not about racing at all, it's about sales. Selling gear, selling energy drinks and first and foremost selling bikes. If the OEMs didn't think fronting a race team would move units then they wouldn't do it, plain and simple. It works, I still ride Honda's because Jeremy McGrath did in 1996 when I was glued to the tv hoping he kept the streak alive. Its blatantly apparent that I would be just as painfully slow on any machine, but we all want to be like our heroes right? But I digress. What I've been wondering is how close are the bikes these pros are riding to what rolls off the showroom floor? What percentage of that package makes it to the track, 5%? 10%? Perhaps 0%? All the magazine tests will say "this bike is competitive out of the box". For a C class local dude, absolutely. But top level pros? I can't imagine. Obviously the engines are one-off hand crafted pieces of art, bazillion dollar A-Kit suspensions and enough carbon fiber to make a kid in a Honda civic jealous. Even the small stuff though, when they chop a sub frame, do they now have to run modified plastics? Some of the accessories are (outwardly) available in the aftermarket, but is the lever I buy really like the one Tomac is running, or does it just have the same logo? My guess would be the frames are stock, or stock appearing, and beyond that nearly every single component is made from some unobtanium simply not available to the average schmuck. But maybe I'm just a cynic. Enlighten us please.

Rained out in Ohio

I love the precociousness and the use of the word bazillion. I guess if you don't know you just assume that every rider is still running a full works bike like back in the 1980s. Sorry to burst you bubble, Marty McFly, but factory bikes aren't as one-off as you like to think. The frame, swingarm, and airbox on every bike are completely stock and have to be, per the AMA rulebook. Suspension is the one thing you really can't get your hands on, and it’s quite a bit better than a standard setting. However, some of that is because a stock setting is a general setup that is designed to work at a satisfactory level for a vast range of riders. Any time something is dialed in for your weight, skill, and style it’s going to be better. The engines are massaged, but you can only control so much horsepower. On a 450 the trick is getting it in the right place and changing the characteristics of it through mapping so that the rider is happy. The power plants on the top 250s definitely run closer to the red line and the winning teams spare no expense making them scream. Special coatings, different materials, and factory engine specs are the norm and some of the stuff you can't get. However, I would tell you that if you let Ryan Dungey use his own suspension and general setup pieces on a stock bike with an exhaust, he could still land on the podium at a national. This sport has been and always will be more about the rider than the bike. The reason these teams spend so much time and effort working on the bikes in as much for the riders’ heads as anything else. Confidence is king in all professional sports, and if Dungey thinks his bike is the best and his fitness is the best and he's riding his best, then he is going to the line knowing he can win. The trick is putting all that formula together and avoiding injury while doing it.

First, always enjoy your weekly rants, errr answers, so keep up the good work. Dungey looks like another title to finish up the Motocross season, Ken Roczen looking like he is riding hurt, Barcia may have turned a corner with his bike and confidence at RedBuuuuuddd, RV MIA and most likely retired. Ok, for the real question. Monster Girls or Lucas Oil Girls? As a married guy like yourself, I can only look and I certainly wouldn't kick any of them out of bed for eating crackers. But I say the Lucas girls for sure, more natural look, ahem. What say you?

This question is a bunch of crap. It's the equivalent of asking if I like chocolate, vanilla, or strawberry ice cream the best when the obvious answer is Neapolitan. Or asking if I like Porsche or Ferrari better. Yes, please.

Each of our series has its own feel and its own way of doing things. Supercross is awesome because the obstacles are man made and they are big and nasty and filthy and beautiful. Same goes for the supercross spokesmodels. The Lucas Oil Pro Motocross Championship isn’t as loud and in your face, and it runs on curvy natural terrain with a wholesome, beautiful aesthetic and daisy dukes and a little checkered shirt tied up in a knot so their belly button plays peek-a-boo every time they hold up the thirty-second card or wave to a fan and… Uh, wait, I might have lost track of where that was headed.

My point is that I prefer to enjoy both series, as well as the lovely marketing personnel they choose to employ. They each have their place, and right about the time we get tired of one series the other one is right around the corner. That's a beautiful thing.