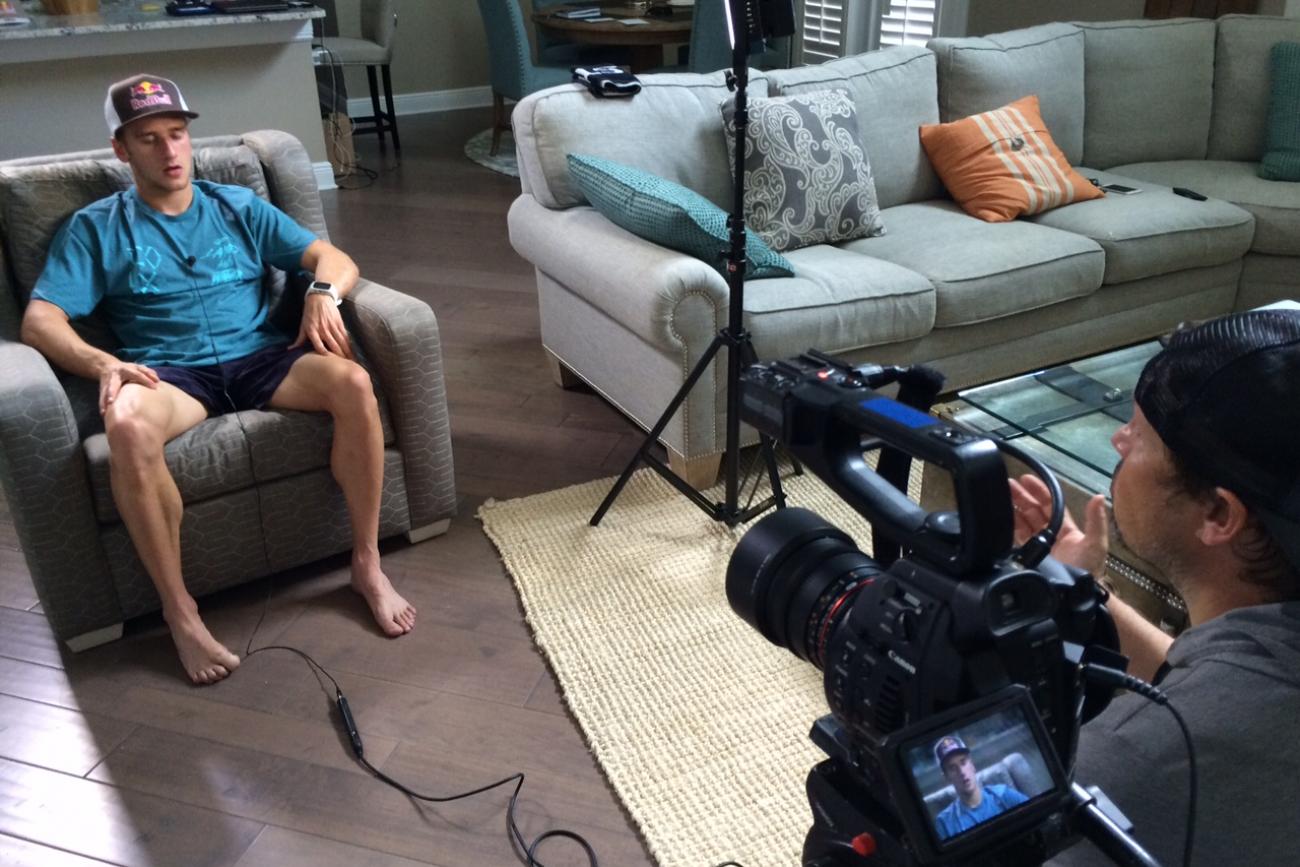 You may not know Troy Adamitis, but you surely know his work. The creator, director, and editor of shows like The Great Outdoors and Behind the Dream, season 1, Troy and his gang are able to get behind the scenes of our favorite sport to present it to you like you’ve never seen before.

Yesterday, a brand-new web series called MX Nation premiered on Red Bull TV on YouTube, with Troy once again going beyond the barriers to get in-depth with riders like Ryan Dungey and Ken Roczen. We caught up to Troy to talk about this new venture.

Racer X: Tell me a little bit about MX Nation, the series you’ve got going with Red Bull.
Troy Adamitis: It’s a six-episode series. It covers the outdoor nationals. Basically, the riders that are on the top and the ones that have the best story going right now are the three guys that are rounding off the podium, which are Roczen, Dungey, and Jason Anderson, so it kind of bounces around between those camps. We just try to get some inside stories of the troubles, the conflicts, the lifestyle, the difference between the camps in Florida and California. There are a lot of things that are developing, and I think the sport’s changing a lot. We’re just trying to be right there to capture what’s going on, just to tell a real current and modern story. There’s always something out there to talk about, it just depends on if the riders and the teams want us to talk about it or not.

You’ve certainly run into that with your Great Outdoors videos and Behind the Dream and everything else. What fans need to realize—and you’ve done a great job of this over the years—but people don’t realize that there’s so much more to it than just the racing once the gate drops.
That’s the way we’ve always looked at it. The racing is just kind of a background. That’s usually the payoff or the highlight of the episode when we actually get to see the gate drop and watch them race. The race is cool, and that’s where everything plays out, but what I think is interesting is the relationships between fathers and sons, riders and mechanics and the teams. For example, riders live in Florida and the rider wants to test in Florida, so the team has to send all their guys and gear out to Florida. Well, maybe that’s not in the budget. There’s a conflict, or let’s talk about that.

I think that’s a better story and a story that your average joe can relate to other than, did Roczen win or lose on the weekend? What’s relatable to people that don’t know anything about the sport? It’s still about racing so the racing fan can take it and say,here’s why I love this sport and after you watch it you will understand what is special about it. . It’s like a grassroots campaign. We do stories that the general public can understand but also that the core rider wants to show their friends. That’s how we think we can help the sport grow.

Can you give tell us something that will catch people by surprise?
There’s an interesting triangle that’s going on that I think is the most relevant, and it’s that Ryan Dungey and Ken Roczen are the main guys. Those are the guys that are going for the title. It’s just an interesting circle how Roczen left the team that Dungey’s on right now [Red Bull KTM]. Roczen also left the trainer that Dungey’s with right now [Aldon Baker]. Ken has decided to go to a new team and do things his own way. Dungey has kind of stayed with the team that he believed in and also added basically Roczen’s old trainer into the picture. And how that whole thing works, and is it going to work out for Ken? He feels confident about it. He’s up front and willing to say, “I’m going to do stuff the way I want to do it and I’m different than everyone.”

So for me I want to create the argument of, “Do you need structure as a modern motocrosser? RC [Ricky Carmichael] and RV [Ryan Villopoto] bought into it and look at their careers. They woke up at a certain time, grinded out countless motos, and did their training and diet under Aldon. Or can you do it like Ken Roczen is doing it—sleep when you want to, work with the people and teams you want to work with, all while having fun and enjoying life? Ken says, “I want to be able to go and have fun, it makes me a better rider.”

I think that’s cool because he’s more of a modern day [Jeremy] McGrath. He’s a throwback to what we’ve seen in the past. Can it work in the Aldon Baker era? That’s what we want to find out. Either way, I think it’s brave of someone like Ken to say, “Everyone thinks you have to do it a certain way but I’m different. I’m not going to do it that way and I’m still going to be successful.” He puts himself out there. He’s on a chopping block, and we’re going to see if it’s going to work out or not. The conflict is the strict modern-day mentality versus the laid-back mentality back in the nineties, which is, let’s have fun, let’s have a long career, and let’s live a lifestyle that this sport provides. Is it better to have a short, multi-championship career and get out of there early like RV or is it better to have a long career where you have fun like Windham? I think half the public would say, yeah, stay in and enjoy yourself and live your life, and other people would say, no, this sport’s dangerous. Get in, get as many championships as you can, and then go live your life.

Ryan Dungey is sort of notorious for not loving to do a lot of media things. Kenny of course likes the camera and all that. How’s that access been for you?
Actually, it’s been the opposite of what you just said to be honest. I think Ryan has kind of come into his own now, where I feel like he’s just a lot more comfortable with showing the fans and the audience a different side of him. We’re really excited to try and show Ryan off the bike. He’s a funny guy, and he does like to enjoy himself. I just don’t think that we’ve had opportunities to do that because I’ve always thought that he’s been a serious, focused, training-type like you said. But I think that now he wants to do some stuff that shows his personality.

Now, Ken on the other hand, he is all about personality. He is the most followed athlete on social media. But I think with a lot of the changes that he has made to his program, there’s a little bit more stress trying to adapt than he would want to be seen on camera. He’s been a little bit more like, “Let me get all this figured out first and then we can do some fun things for the show.”

So the stuff that we have with Ken is pretty serious, and it’s real. I think when he has everything worked out with the bike, with the team, with his training program, then I feel like we will see the fun side we expect from Ken. But for the first few episodes it’s a real story, and he’s really trying to find his way to get to that comfort zone.

I don’t think the public will ever be able to see it, but you did a video at the KTM dealer show about getting people involved in racing motorcycles and riding motorcycles. Tell me a little about that.
KTM approached us. We’ve been working with them for a long time, so we have a lot of footage collected over the years. Actually, [KTM North America President] Jon Erik Burleson came to me. I think it was even before they had [Mike] Alessi on the team. I can’t remember the year, but it was a good six, seven years ago. He said, “We have a long road ahead of us, but we’re going to get to the top and I want to document it.” So we started with that, and we were able to use all that footage all the way through. When we first started years ago, they were going through rough times. The footage was of lot of riders have their heads down, shaking their heads, and all that struggle on and off the track, but we kept filming all the way up to Dungey winning the supercross championship this year. So it was a story of their journey.

Thankfully, we were there from day one from when they were at rock bottom. It was cool that they recognized that. They said, look, we’re at rock bottom now. Cover this because we’re going to be the best in the future. We don’t know when, but we definitely want this documented. And then the other part of it was the off-road guys, which I didn’t know a lot about. But I found out that those guys are really the roots of KTM and are also the roots of the sport. They’re out there doing marketing at these places in the sticks in the middle of nowhere. They’re kind of the unsung heroes of this whole brand. They’ve carried the torch, these off-road guys.

And then another part of it was the KTM kids. It was kind of a cool journey because Dungey did the KTM Junior Supercross Challenge when he was seven years old and his hero was McGrath. His hero was always a guy that was riding a different brand than the KTM. McGrath was on a Honda, or a Suzuki or a Yamaha. But now when these KTM kids come through , their hero is Ryan Dungey. So these kids can come and race on a KTM at 6, 7 years old, and then their favorite rider that they look up to, and they get to shake his hand, is Ryan Dungey. So it’s like the KTM is there when they first go on a supercross track and hopefully if they ultimately arrive in their sport, they’ve gone full circle. KTM has spent a lot of time and effort into getting there.

Any plans to bring back The Great Outdoors?
That was more of a DVD-based project, and that’s when DVDs would sell. We would at least make our money back on those. Now, with the web and with a company like Red Bull, a producer’s outlet has changed. They have 4.5 million subscribers to their YouTube, so more people will see this than will see any of those shows combined—Behind the Dream, The Great Outdoors. It’s just in front of more eyeballs. I think that Red Bull’s found a way to monetize it, and there’s value there, so they’re willing to put up the budget to make quality shows. I just think that’s kind of where the future is. Doing a Red Bull series is basically where you want to be at this stage in the game. I think shows distributed online is the future.