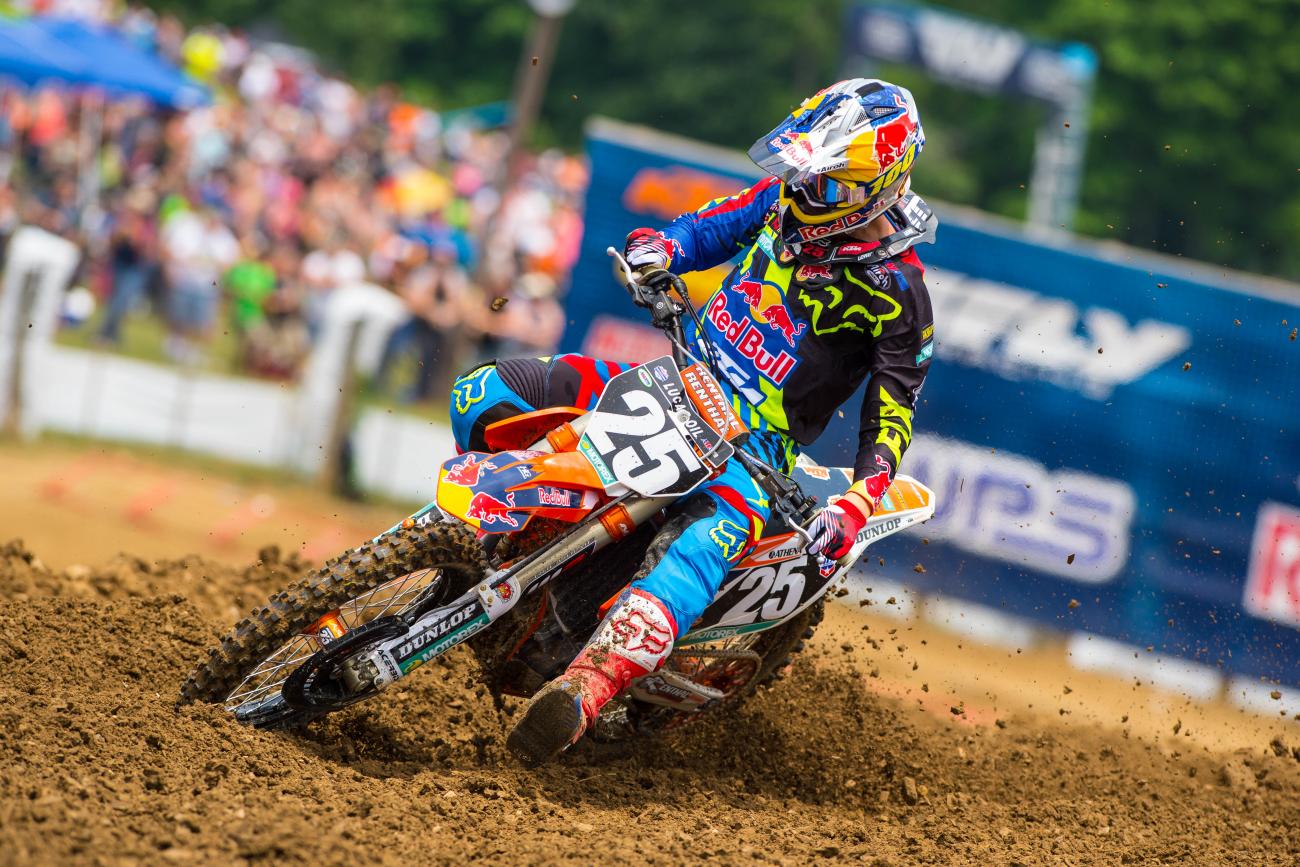 Budds Creek, Maryland, is the next stop on the Lucas Oil Pro Motocross Championship schedule. Budds Creek lies in the shadow of our nation's capital, and most of the teams and riders will fly into Washington D.C.'s surrounding airports. Leaving D.C., however, the Maryland coastline offers a much more relaxed atmosphere. It's a simpler life as you approach the historic racetrack, far removed from the hustle and bustle of the looming metropolis. In fact, it's common to see many Amish families cruising the local roads in their horse and carriage as race fans invade the facility. There may be no bigger example of lifestyle diversity on the series than Washington's political rat race and southern Maryland's Amish heritage.

As for the track itself, it might just be my favorite of the season. The dirt is bright orange clay and similar to what I grew up riding on. When disked deep, it provides legendary traction. It can get a bit hard and slippery when unkempt, but that's uncommon in the modern era. There are some signature obstacles at Budds Creek, such as Henry Hill. If you are unsure of the significance of Henry Hill, YouTube Doug Henry's epic get-off in 1995. The track has been run both directions in the past decade or two, but lately it’s been in a counter-clockwise direction. It winds up and down the hillsides characterized by long ascents and descents that test both horsepower and chassis prowess.

The turns at Budds have a tendency to form one good inside line and one longer, more sweeping outside line. As riders descend the hills, watch for them to weave in and out of traffic trying to get to their preferred line. The faster route will change many times during the day as ruts and berms break down, keeping sharp riders on their toes. These tight inside lines and momentum-carrying outside lines create an interesting yin and yang as the track evolves.

There are great drag races to be seen up the hills as these two different routes merge. This inside/outside nuance can be seen just before the finish line in the roller section. Watch for riders to slowly double the steep, rutted rollers on the shorter inside line while others will try to carry a lot of speed around the more forgiving outside line. Both lines will blend back together as the finish-line tabletop approaches, making for some heroic last lap passes.

The starting line has been moved several times since I began racing at Budds Creek back in 1996. Back then it was on the far side of the property, on a section of racetrack that’s rarely utilized anymore. The start was near vertical, but I always felt it was very safe. As riders backed off the throttle, gravity slowed the pack and minimized the high-speed first-turn crashes we see at some other tracks. Sure, there were still some mishaps, but the uphill really did lessen the severity of the inevitable. In 1998, the start moved over by the big barn, near the pro pits. There it remained for nearly ten years but it was never really liked by the riders. The first turn was incredibly sharp, and I would venture a guess that a pile-up ensued nearly every moto for a decade. I was lying at the bottom of many of those crashes over the years and was happy to see a change when the 2007 season rolled around.

The current start has been in place for a while now, and while not perfect, it’s much better than before. It came in 2007, when the Motocross of Nations was on the Budds Creek schedule. The biggest gripe I have with the current version is that the inside is favored far too heavily. The inside gate is a straight line to the first turn, which is a hard 180-degree left back in the opposite direction. There have been slight modifications made over time, but it’s still an insurmountable task to get any respectable start from the outside gates. There’s too much ground to be covered and the turn is too tight, leaving the outside riders pushed off the course nearly every moto. It was incredibly geared toward the inside gates in the first year, evidenced by Ryan Villopoto's holeshots aboard his 250F at the Motocross of Nations. While it’s still unfair, it has been improved somewhat and doesn't seem to entice high-speed crashes, which is an upside.

Ken Roczen picked up his first overall win of the season at the last round in Pennsylvania. After the first moto, I wouldn't have thought he could keep Ryan Dungey at bay in moto two, but he dug deep and found a way. His confidence is growing and he will be a factor to win every moto now.

Ryan Dungey's first moto at Mt. Morris was a spectacle. He was more aggressive and innovative than I can ever remember seeing him before. It was truly a statement ride from the points leader. His second moto was a bit less impressive, but he did reel in his rival, Roczen, a bit. He has a sizable lead and surely will be happy to split moto wins down the stretch if that's what it takes.

Marvin Musquin was simply superb in the rolling hills of southern Pennsylvania. He knew that was a race he "should" win and not particularly a strong venue for his championship rival, Jeremy Martin. He took charge and ran away with the day, gaining valuable points along the way.

Alex Martin had a rough couple of weekends leading up to Mt. Morris, but he bounced back nicely. His starts were good enough to keep him out of trouble, and he battled the reigning champ, who happens to be his brother, seemingly all day long.

Christophe Pourcel finally showed the potential that the Rockstar Energy Racing Husqvarna team knew was hiding inside the Frenchman. He was quick all day and gave Roczen all he could handle in the first moto. He got a respectable fifth in the second moto, earning him a season-best fourth overall.

Chad Reed has officially ended his 2015 season. He had shoulder surgery last week to repair a supercross injury and has a lot of hard decisions to make before 2016 rolls around.

Blake Baggett had a rough weekend at Mt. Morris. He had fork issues in moto one and had to fight through traffic in moto two before settling for an eleventh. He is a top-seven guy with potential for more if things go right. Mt. Morris was not one of those examples.

Chris Alldredge had a day to forget. His 15-15 scores are far below what he is capable of producing. He should be better in Maryland.

Jeremy Martin lost 14 points to Marvin Musquin at the last round. He seemed to struggle with passing and never found the rhythm we’ve seen from him most of the season. He’ll need to perform at the next few races, as they are his best tracks.

Jeremy Martin bounces back with the overall win in Maryland.

Ryan Sipes decides to race Budds Creek, an Enduro, the Sonoma NASCAR race, and pitch for the Yankees all in the same weekend.

Mitch Payton smiles for the first time in 2015.