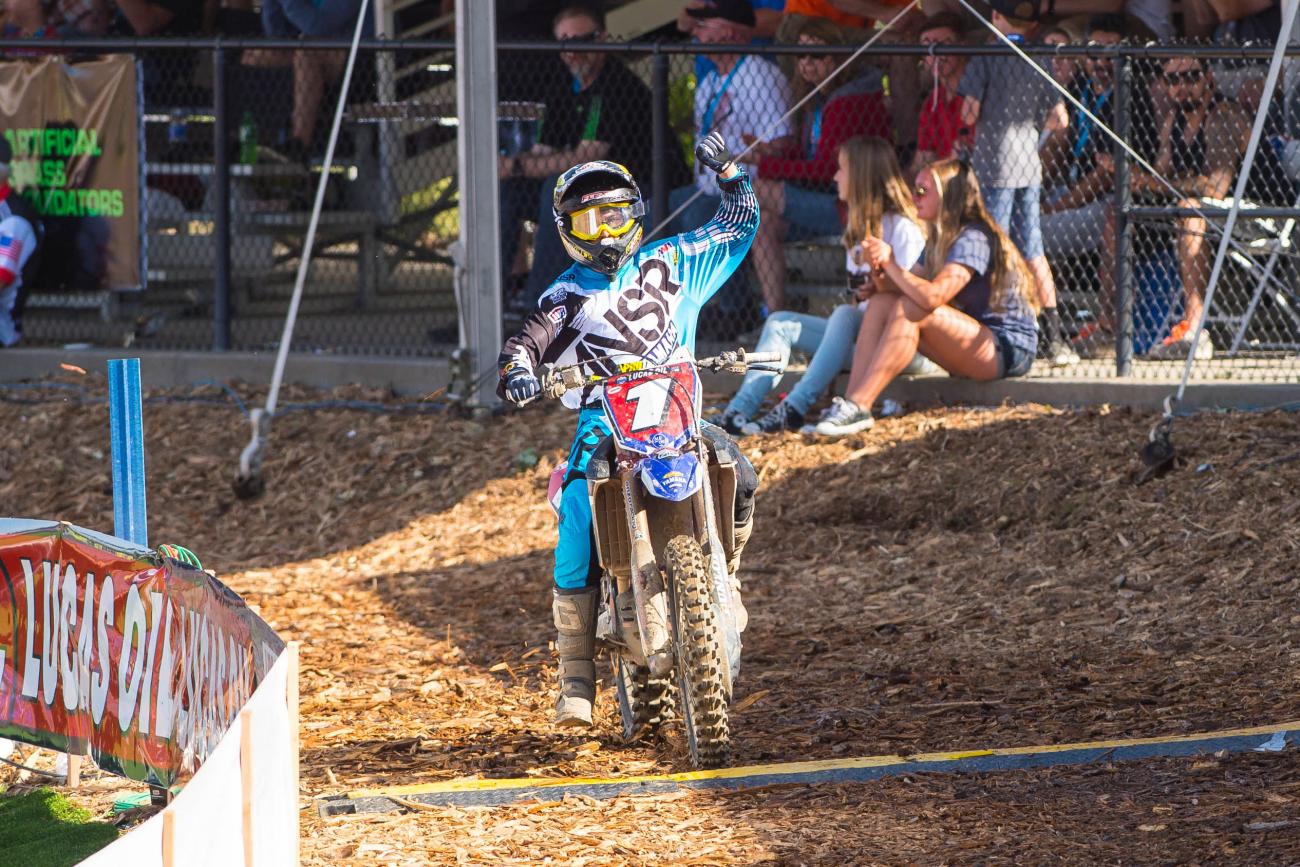 Yamalube/Star Racing Yamaha’s Jeremy Martin struggled for the first ten minutes of the first moto at the GoPro Hangtown Motocross Classic, getting shuffled back to sixth early in the moto. A few laps in, the defending Lucas Oil Pro Motocross Champion woke up, found his groove, and eventually climbed up to second. He then waxed the field in moto two to snag the overall win. The champ? Yeah, he’s going to be just as tough to beat as he was last year.

Racer X: Congratulations. Forty-seven points, 2-1 today, and of course because of the second moto, the tie-breaker, you win the overall. Tell us about your day, especially going from the first moto to the second moto. What a turnaround that was for you.
Jeremy Martin: Yeah, for sure. I ended on a positive note. I was a little disappointed with the first moto. Marvin [Musquin] and [Justin] Bogle just kind of beat me in that first turn just enough to kind of pinch me off, and I kind of fell back and had a heck of a battle with [Joey] Savatgy for probably twenty-five minutes. Used all my tear-offs. He’s very smart. He was to see that I’d go outside one lap, then he’d switch to the outside the next lap, then I’d go inside and he’d switch inside. He’s a smart rider and I was able to capitalize on a mistake. I got around him and then tried to sprint to catch Cooper [Webb]. And then I think Cooper had a little issue with some goggles maybe and I was able to capitalize on that. I didn’t know what place I was in. I crossed the finish line, and they were like, hey, you’re going to the podium. I’m like, am I in third [when he found out he finished second]? It was pretty cool.

Was it because of the difficulty of being able to read your pit board and where it was placed, or they didn’t put it on your board?
I just felt like I was so far behind. Every lap I saw those guys getting further and further and further away. I was like, I need to pull the trigger now. And then I was just trying to get on a mission and try to reel them in.

How different is it coming into this year as the champion compared to last year when you were under the radar? Does it feel different this year or is there more pressure?
I don’t think so. I think it’s all in all a good thing. To be honest, I am the champion here. I guess I’m trying to defend my title, but my supercross season wasn’t the best so I feel like all the hype is on Cooper Webb and Marvin. The two of those guys were just amazing in supercross. Marvin was smoking me in supercross, and the pressure was kind of on them. They’re trying to carry the momentum after a great supercross season and they did very good.

You said you changed the bike a little bit in moto two. It made a big difference. Talk about that a little bit.
Yeah, in the first moto we just made a little mistake on the change, and then second moto we fixed it, and it was better. I feel like I’ve still got some work to do. I felt good in moto two. It was a lot more comfortable so I could stay on the pace—first moto was a little different. We’ve got to get the bike a little bit better, and I’ve just got to get a little smarter with line choices, stuff like that, and passing guys. I’ve got some work to do, and I know what I got to do to fix it, and I’m going to do it.

[In addition to giving Martin an awesome Hangtown trophy, the Hangtown promoters—known as Dirt Diggers North—gave him a custom belt buckle during the press conference. It’s made by the same company that makes stuff for the Pro Bull Riding tour.]

Martin: Wow, that’s pretty cool. You know I’ve always wanted to check out a horse-racing event, and Ricky Carmichael’s wife grew up racing horses and is pretty good at barrel racing and things like that. I need to put this buckle on, get myself some cowboy boots, and go check out an event.