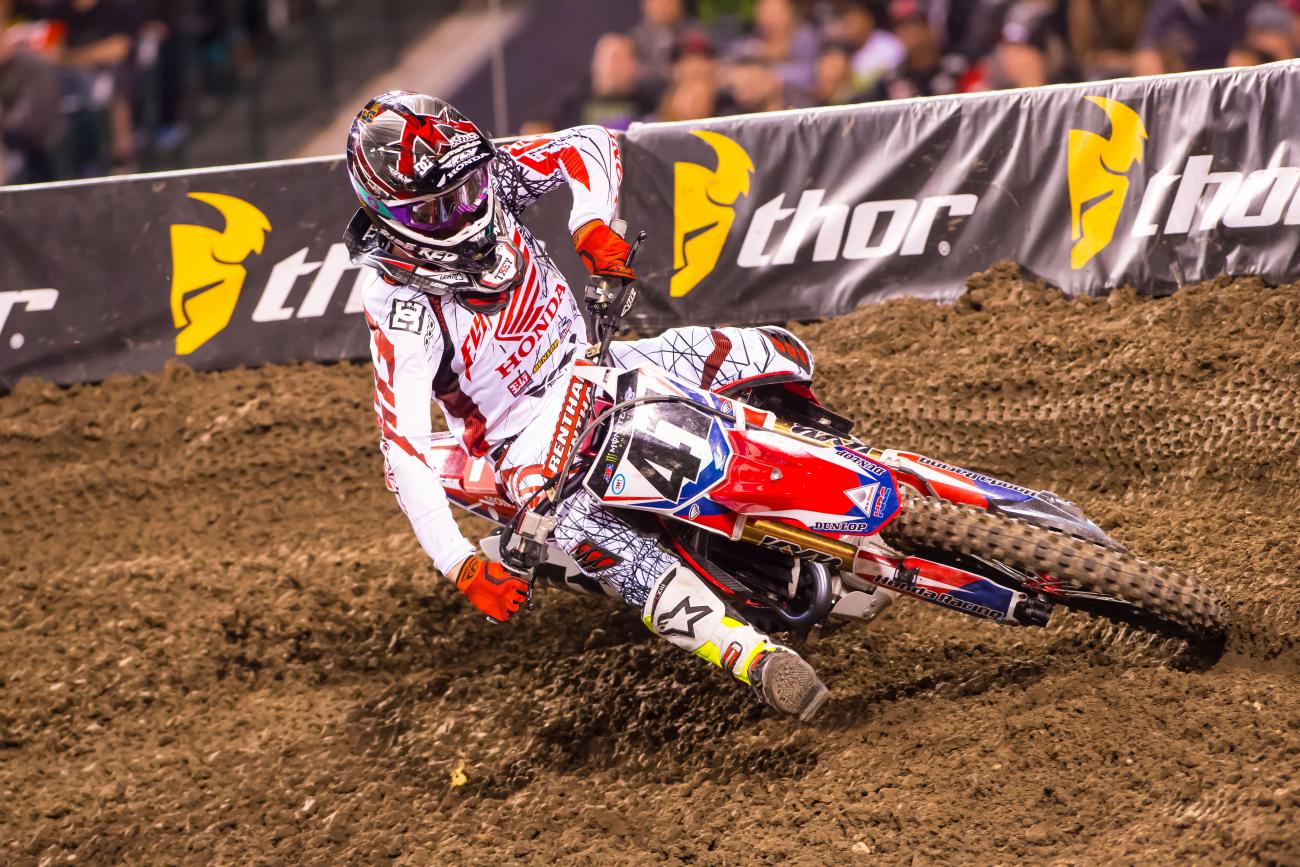 Hello, everyone, and welcome to the Rev Up. With the blink of an eye we’re already at round six of the 2015 Monster Energy AMA Supercross, an FIM World Championship. Predictions rarely hold any weight, although the ones we (the media) made coming into this season have been pretty much shot up like a 1950s gangster getaway car. In fact, there are some big bullet holes from some claiming that Davi Millsaps would be leading the series when we headed east, and a scattergun blasted the notion that this would be Justin Barcia’s year.

I read everything supercross related, and the media has been pretty hard on those two, myself included.

However, for all intents and purposes, they haven’t been good at all during the first segment of the championship. That said, even our early heroes like Ken Roczen (who I earnestly coined to go on a roll), Eli Tomac (who many expected to streak after Phoenix), and even Trey Canard (who was the only rider to start outside the top ten and win a main event) have all fallen short of predictions placed on them following their individual victories. Instead, Ryan Dungey has busted this thing wide open and, while he has a small lead over Roczen (11 points), he has almost a full race advantage over third and fourth in the standings.

We’ve witnessed a whip effect of sorts to begin the season. Nobody truly has the momentum, but if Ryan Dungey comes out and wins again this Saturday night at Petco Park in San Diego, he can legitimately start thinking about the championship as the East Coast swing begins next week. Credit where credit is due—he looks better on the bike than he has his entire career. The machine under him is arguably the best in the field. Could Dungey experience a whip effect in his championship effort similar to Roczen, Tomac, and Canard? I wouldn’t count on it. But, ladies and gentlemen, this is why we run the races!

And, speaking about the races themselves, the last three tracks dating back to the under-over bridge that adorned the Anaheim 2 course have been fantastic. I love the creativity and diversity with the sand pits, split lanes, and long drag-strip straightaways. This weekend’s track has a little bit of Phoenix and Oakland sprinkled into the design. Being a baseball field, there’s the typical long lane down the third-base line, yet I like the slow-arching right-hander that is part of the start. It’s funny how the simplest parts of the track supply the most passing opportunities, but I can see a lot of position changing happening on that sweeper this weekend.

As for the dirt, there has been more of a hard-packed clay base the past few trips to San Diego, but with this being a new field the soil should be fresher. Regardless of the composition, the Feld track crew heavily waters the track Friday night and all through Saturday morning, which makes the opening practice sessions rough but provides optimum conditions for the mains. Again, credit where credit is due. The tracks have fallen victim to scrutiny in recent seasons, but the effort to improve them is evident. Golf clap, for sure.

There will be a special vibe surrounding the weekend with the military and returning veterans being honored all throughout Saturday’s festivities. And, it’s no secret many of our soldiers are avid supercross fans.

Ah, but the theme for this week’s column is leaving California. The championship landscape in the 450SX Class can go in two directions at the conclusion of the weekend. Dungey can further pull away, or he has an off night and things tighten up in the top five as we head out of the Golden State. Rookies Blake Baggett and Cole Seely are starting to scratch their names into the podium picture, and Seely himself has a strong chance to win one of these things soon after taking his first podium last weekend. Will The Diesel hit the turbo and blow black smoke, or will Canard and Tomac get another win and inch back into the fight? Ken Roczen could leave California as the only three-time winner of the series thus far, and Chad Reed could prove that no matter what the venue, he is still Mr. San Diego.

Over in the 250 West Region, Cooper Webb owns an 18-point lead and is definitely the guy. I think he could start outside the top ten and still win the race, although a spill or large-scale mistake can bring his competition right back to his rear fender.

Please tune in to Race Day Live at 12:50 PST and check out our featured guest Ricky Johnson and ultimately see who will win fastest qualifier.