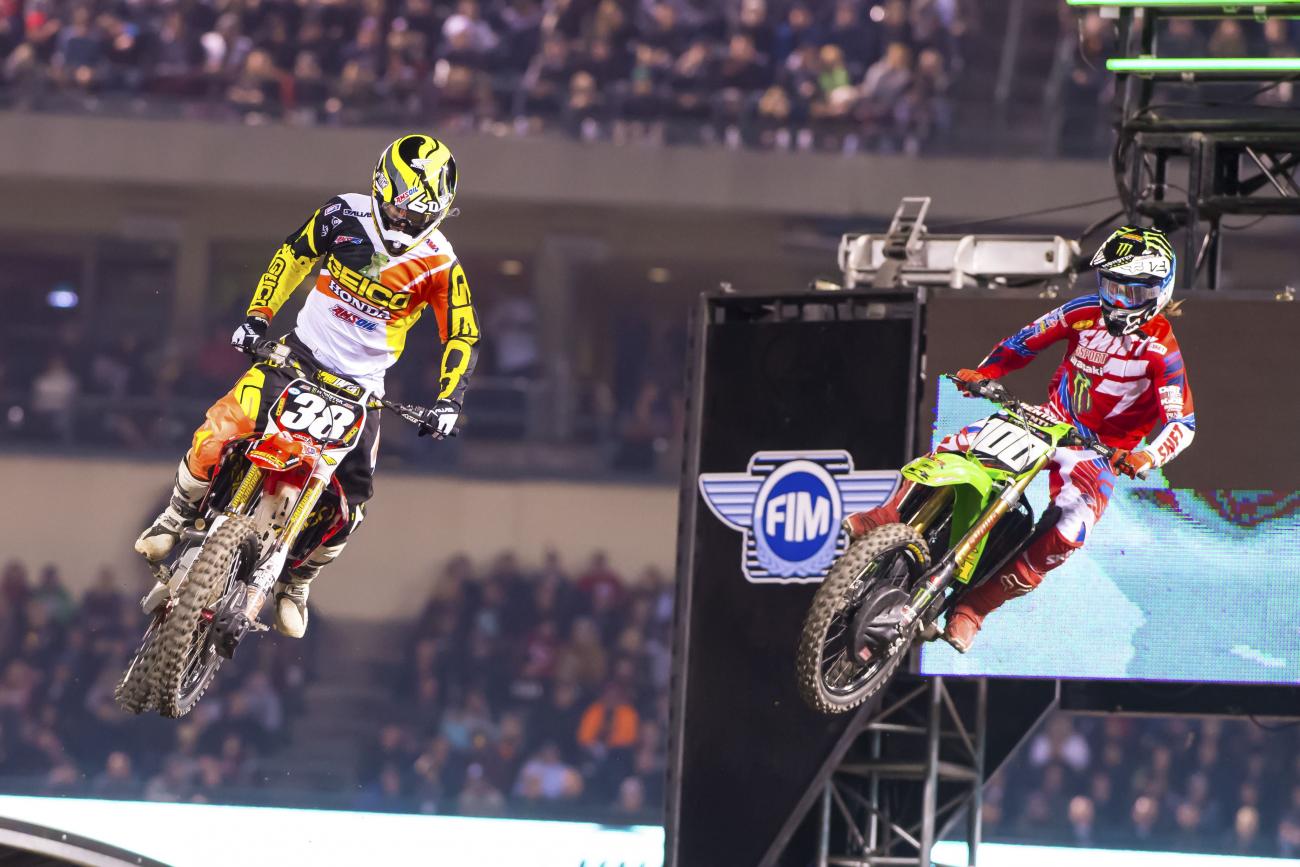 For the past few decades, the San Diego supercross venue has taken place at Qualcomm Stadium. Not to say that Qualcomm is old and decrepit, but Qualcomm is old and decrepit. It falls into that category of stadiums that no one is excited about, like Oakland or the former Cowboys Stadium in Irving. The good news is that we are no longer there! Feld made the move to Petco Park, where the San Diego Padres play baseball. Petco is downtown, right in the heart of the city, and I couldn’t be more excited for the change. San Diego has a great downtown scene and it will change the feel of the event entirely. New stadiums make races much more enjoyable for everyone, and change in general is good for a sport with a lot of repetition from year to year.

The dirt in San Diego will be the same, which isn’t a bad thing. Sure, it can be slippery at times, but it’s better than what we normally see in Anaheim. Looking at the track map, however, it appears we will have that “baseball diamond” type layout, with a lot of ninety-degree turns. These types of turns make passing damn near impossible and often times leave riders frustrated. The track looks to be very busy, though, with multiple rhythm sections, so maybe that will help create some separation. The start looks very short and bends all the way back around to the inside, making the outside spots tough to utilize. Furthermore, it’s the dreaded right-hand first turn. Riders can’t use their rear brakes as their right foot will be off the peg to help turn. This inevitably pushes everyone deeper into the first turn and causes pile-ups. A right-hand first turn is a “when” not “if” for first turn crashes. Luckily it’s a short distance, so hopefully that lowers the difficulty in slowing down with just the front brake.

Dungey, Dungey, Dungey. He has only moved forward this whole season, and coming off of last weekend’s performance, he dominates this category Who’s Hot category. Cole Seely turned in his career-best finish last weekend and should be riding into San Diego with a ton of confidence. Cooper Webb is on an absolute tear in the 250 class and simply looks better than the rest of the field. He can put his bike anywhere he chooses and actually look faster doing it than his competitors in the main line. I’ve seen riders able to do that before and it’s usually horrible news for everyone else.

Aaron Plessinger has been a revelation this season and snagged his first podium last weekend. If anyone had told me he would be this good, this early, I would have been very skeptical. Matt Bisceglia deserves some recognition as well. He was leading the first main event for a few laps before the red flag and backed it up with a top-five in the final race. After sitting out with a concussion, that was a great bounce back ride.

I have to put Kenny Roczen here. I don’t know if the Oakland crash took some momentum away or if the change in program has had any effect at all, but he didn’t seem like his normal self on Saturday night. He wasn’t able to charge past riders quickly like he normally can, and just lacked that intensity we saw earlier this season. I think he will be back to his old self soon. Very soon, indeed. Davi Millsaps is a complete question mark for me right now. I had him being a serious title threat coming into this series, but that has just not panned out. All is not lost, as we have a ton of races left, but he is just better than this. There’s a faster Millsaps out there somewhere, and hopefully he comes to San Diego.

Tyler Bowers is here after missing the podium in Oakland and then suffering a massive get-off in Anaheim. He did get robbed a bit with the red flag, but crashing is bad for championships in any situation. He’s riding well, which is the important part, but points are slipping away.

- Ken Roczen bounces back to win his third race of the season.

- Chris Alldredge has another unfortunate get-off, and with a downtown stadium this year, sends his Monster Energy/Pro Circuit Kawasaki thirty-four floors up into a neighboring high-rise. His crash is condemned by race officials but then played in every SX commercial for the remainder of the 2015 season.

- Kentucky Bear-Man (Tyler Bowers) finally loses it. After being antagonized by the Yamalube/Star Racing Yamaha riders, he goes on a rampage, throwing riders like Frisbees. He even utilizes the devastating Atomic Elbow on an unassuming flagger. May God rest his soul. Once he clears the field of any threats, he declares the finish line jump “Bear Mountain.” John Gallagher docks his points, pay, and orders a dozen bear traps for when the series returns to the West in a couple of months.

- Zach Obsorne brings his own starting gate to San Diego. When asked about the controversial move, he replies: “If you want a job done right, sometimes you have to do it yourself.” Thanks, Zach.

- The Channel 4 News Team makes an appearance at the San Diego event and is enthused by the world of supercross. Ron Burgundy plays “The Star-Spangled Banner” via jazz flute and comments that race gas smells of rich mahogany. Champ Kind, the sports correspondent, makes many indecent, unprovoked advances at both Monster girls and also at Dirt Shark.

- Cooper Webb keeps his hot streak going and walks away from the field.