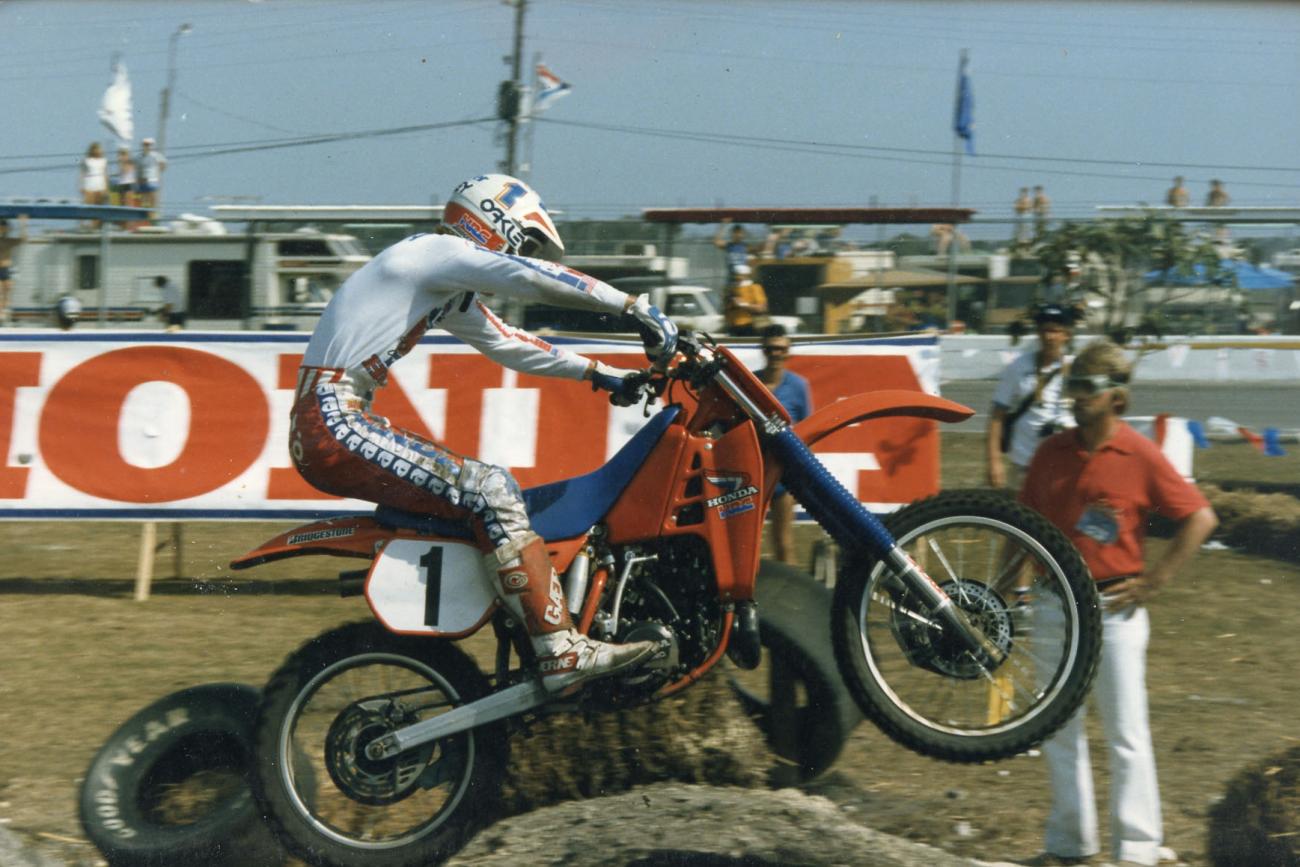 Hello, everyone, and welcome to the Rev Up. Whether you are a baseball fan or not, pretty much everyone was aware of the World Series taking place during the last week or so. Twenty-nine years ago, the Kansas City Royals were World Champions and they came within one run in Game 7 of the 2014 World Series of repeating that effort. Instead, the San Francisco Giants won their third title in five years and established themselves as a baseball “dynasty.” As much as Joe Buck kept repeating this feat over and over, I conversely kept thinking back to 1985 when Hall of Famer George Brett and my home-state team won it all. But, that’s just baseball. Like any moto head, I started thinking about the 1985 motocross season as soon as the game was over. That was an amazing year in our sport.

It was a transitional period, as it would mark the last year of the works bikes in AMA competition. Go ahead and check out the Racer X Vault, which has a great piece on this season. That year was the heart of one of the most competitive eras in the history of motocross. David Bailey, Ricky Johnson, Johnny O’Mara, Jeff Ward, Ron Lechien, Mark Barnett and Broc Glover are six of the greatest champions of all time, and every week they fought tooth and nail for victories and championships. What was so awesome was that there were virtually no win streaks or dominance during this period. Some can argue about the tracks or the machines being a factor, but I believe it was the grit and determination of the racers instead. Those guys were as talented as they were competitive.

As we approach the 2015 supercross season three decades later, I see the scene on the racetrack having a very similar flavor. Think about this set of riders: Ryan Dungey, Ken Roczen, Davi Millsaps, Justin Barcia, Trey Canard, James Stewart and Chad Reed. All seven of these guys have won races within the past two seasons and all of them have a chance at this title. It’s almost impossible to compare these guys to the old guard, but looking at the 2015 Chad Reed, I see a lot of the 1985 Bob Hannah. Like Hannah, Reed’s career is in its waning moments, but also like Hannah, he can still show up and win against the kids on any given gate drop. As for those modern riders, there may be an Alpha Male within the group in Ken Roczen. The German was fairly close to winning both championships last season, like Wardy did in 1985. I believe Roczen is the pre-season favorite for the supercross championship, but it is going to be a dogfight the whole way through.

As far as the schedule goes, there were only eleven rounds in 1985, [Ed. Note: They ran two main events at each round] and this season the boys will endure an arduous seventeen races in eighteen weeks. That’s almost 25 percent more racing in the series today, so some of you old-school fans that think the racers have gone “soft” in recent years need to take a look at that. Another comparison is the double header at the always-popular Seattle venue in 1985. While we won’t have back-to-back racing nights like the old Seattle event, we will be visiting the new Grand Daddy supercross stop on the tour with back-to-back weekends in the Georgia Dome. I think this is a huge home run for the series, and they will come close to selling out two weeks in a row.

Could we be looking at a repeat of the 1985 season thirty years later? This is a tall order as there were eight different winners in eleven races that incredible year. Ward took the championship by 2 points over Broc Glover and 6 points over Lechien. What do you guys think? Could it be Roczen winning the title by 2 points over Dungey and 6 over Millsaps? I don’t know if we will see eight different winners, but I strongly feel we will see five or six and the title will go down to the final round in Las Vegas.

Like 1985, 2015 could be another transitional year without the great Ryan Villopoto competing in American supercross. Who knows for sure, but I always like to look back. How many of you old-school readers remember that 1985 season, indoors or out? I’d love to read about some of your memories in the comment section.