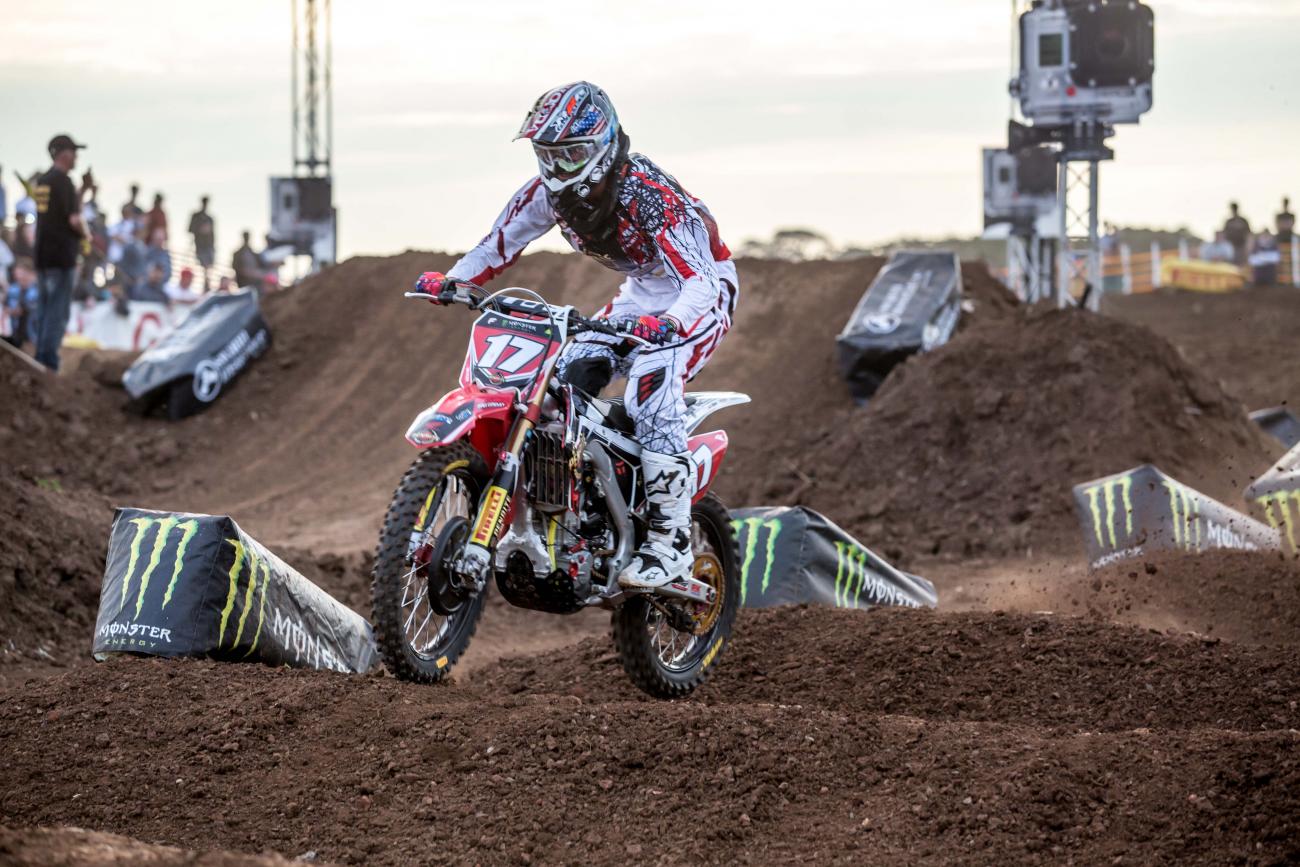 Gavin Faith’s been a fixture in the 250SX East Region the last few years as a privateer and on the Smartop/MotoConcepts Racing team. He’s also been a fixture down under—Faith’s been racing the Australian Supercross series for a few years now, which has allowed him to keep racing and making money. We thought we would check in with the Hawkeye to see what he’s been up to and what’s next.

Racer X: Gavin, sounds like you’ve been busy. You’re back in Australia. It looks like you won the last round of Aussie supercross. How many rounds have you done?
Gavin Faith: It’s been really good so far. We’ve had four rounds and I’ve won the last three, getting a third in the first round. Everything’s been going really smooth. I’ve just been riding smart and I feel like I’m riding really well.

What team do you ride for down there?
This is my fourth year down here and this year I’m riding for the Penrite Honda team, the factory Honda team in Australia.

So it’s been working out well for you. It’s been a nice thing for your career to go down there.
Yeah, definitely. It helps out a lot. I didn’t know what to think when I first came down here, but now I’m pumped that I’ve chosen to come here. It helps racing here and in Germany, and racing in the States, my season is based around the supercrosses. [It] ends up being pretty good all season.

What’s Australia like as a country, for people who haven’t been there? What do you think about it?
It’s pretty cool. All the people here are really cool. I get along with almost all the Australians over here, so it’s really cool. It’s a little bit different from us as far as efficiency. It seems like they’re a little bit more efficient when it comes to saving on electricity and driving smart cars and stuff like that. They seem to be a little bit more efficient than us.

How long do you go down there for at a time and then come back? How does travel work for you?
It depends on the schedule of the season. This year we had the first four rounds back-to-back. And then we have two weekends off. I was supposed to go back to America for the break, but I decided to just stay over here for three weeks, kind of bounce around and see what’s up. Not this weekend but the next we’re back racing.

And then the German series starts up at the end of next month?
Yeah, I’m not sure the exact dates, but the first German round is the weekend after the last round over here.

It’s nice to see that a guy can make a living. You’ve got to travel a little bit and be away from home, but it beats digging ditches, right?
Yeah, definitely. Obviously it’s tough to make a living racing just supercross only. It works out pretty good for me. I’ve won in Australia and Germany. I’m just kind of working the series and being an international racer.

Your supercross season over here didn’t go the way you wanted it to go. You got hurt and missed some rounds. What are you planning on doing for next year?
Definitely. Last year was a struggle. I came down with...I don’t know for sure what it was, some type of virus or something. Hopefully for this year we can rebound and have a good year. I’m planning on doing sort of the same thing with Ti-Lube and Storm Lake Honda. Kind of a privateer effort, pretty much. My mechanic, Buddy, is helping me put a lot of it together. We have a pretty good deal going for supercross. Hopefully everything stays smooth and I can put in some good results.

Do you feel that not doing the outdoors the last few years maybe hurts you as far as exposure and getting a ride?
I’m not sure. It makes it tough, but I don’t believe I can’t get a supercross only [deal]. If I do well enough in supercross, I think someone might be there to pick me up for supercross only. I’ve done the supercross thing in Australia, Germany, and America, and it’s actually a pretty full season for me. I train from August to May, so I’m not really too disappointed about not doing the outdoors. If I can make a living riding supercross…but this year, there are a lot of things we’re trying to figure out.