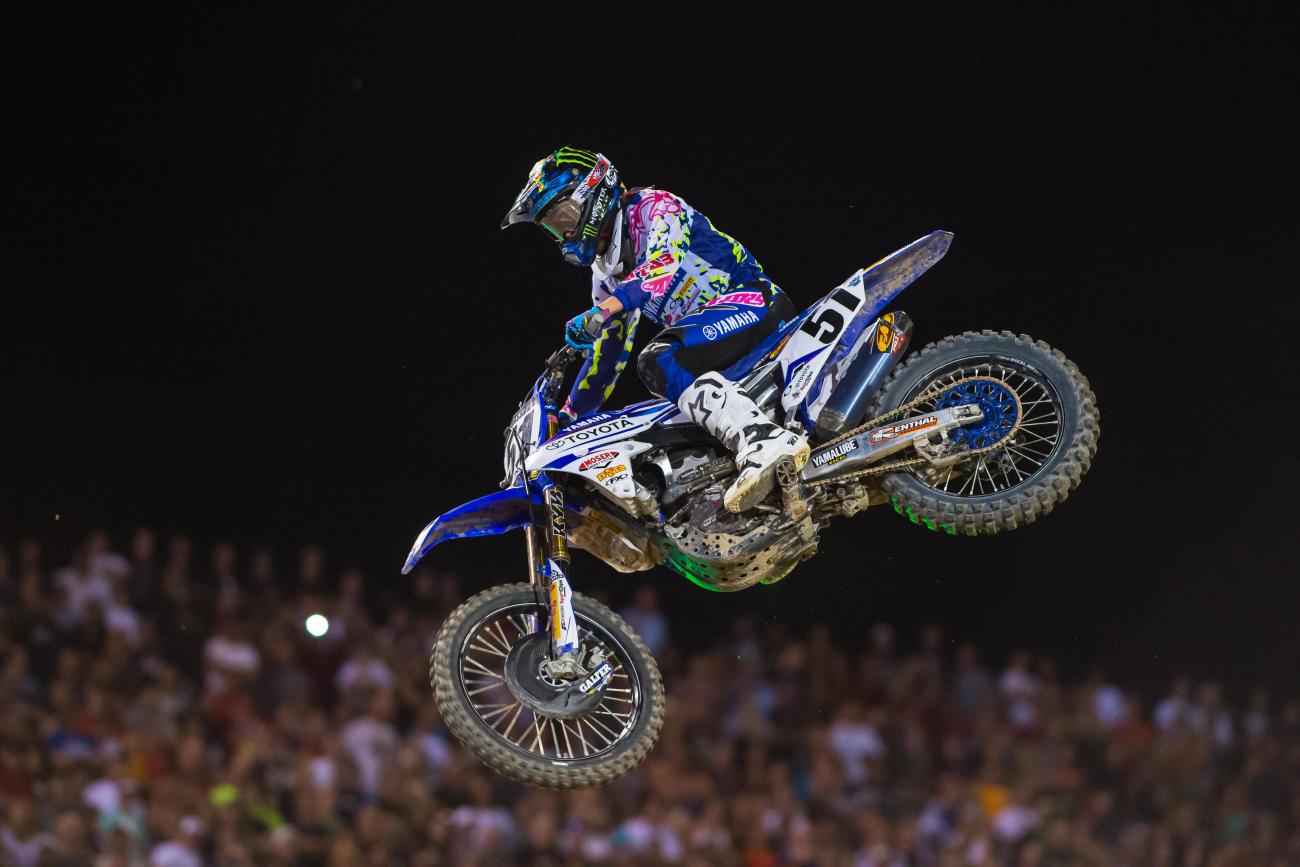 Chase Stallo: Earlier this week we ask our distinguished readers at Racer X Online: “Which 450 team had the best off-season?” No surprise that RCH/Soaring Eagle Suzuki, with the addition of Ken Roczen, garnered 62.1 percent of the vote (as of this writing). Anytime you add a reigning champion, and the clout of someone like Roczen, the voters are going to side with a big-time move. Weege, in an off-season with a ton of big names moving teams and brands, are you surprised the vote favored RCH so heavily?

Jason Weigandt: At first, I was surprised that Roczen and RCH dominated the vote over, say, Toyota/JGR Yamaha adding a big-name like Justin Barcia and also Weston Peick, but we did ask who had the best off-season. Many could have considered JGR a close second, but it's like the electoral college—second doesn't result in any votes at all.

Why does the RCH move trump JGR? Roczen is now the 450 National Champion, so he packs more buzz than Barcia. It's also a little bigger step for that team. JGR already had one high-profile rider in James Stewart, and they've been the only factory Yamaha 450 team for a few years. You knew they'd be in the free agent sweepstakes again. RCH's growth has been more immediate—back when JGR signed Stewart, RCH wasn't even called RCH yet. They didn't have works parts yet. They didn't have Ricky Carmichael on board yet. This was a team once known more for having chicks dancing on poles in pits than it was for actual race results. Incredible that they are probably entering the 2015 season as title favorites!

Meanwhile, isn't it strange that Suzuki—which is struggling in the market in some ways—no 250 team whatsoever, almost zero amateur presence—now has two factory-level 450 teams with two huge names?

Jason Thomas: I think that my own vote would be reflected in the poll results, which scares me more than I should probably admit. When you are a private team (yes, I know they have factory bikes), adding the rider who led the Monster Energy Supercross Championship and then won the Lucas Oil Pro Motocross Championship in his first try has to trump any move in the paddock. They lured away KTM’s golden goose in a move that sent shockwaves from here to Austria. I can only imagine the wooing process that went on there. In my mind, I picture Pink serenading Roczen while Carey Hart is back-flipping over Ricky Carmichael’s fifteen championship trophies into a swimming pool of cash. Try saying no to that!

The easy second place in this is Toyota/JGR Yamaha. They added a championship contender in Justin Barcia, which was a coup in itself, as he has never ridden anything without a wing or a prayer. If he doesn’t win a race in 2015, color me shocked. Backing Barcia up is every underdog’s hero, Weston Peick. This was a good move, as Peick has a huge following from his privateer days and turned in some strong results aboard the RCH/Soaring Eagle Suzuki this summer. I expect Peick to be a solid top-ten guy and, when he’s on, battling for that top-five spot. JGR could potentially have two riders in the top five on any given weekend. That’s legit.

Chase Stallo: I can’t argue with either of those sentiments. Let’s look a little further down to one move that won’t get a lot of hype but could make an impact: Justin Brayton moving to BTOSports.com KTM. Pairing Brayton with Andrew Short gives the team, which has only had factory support for a few years, a very capable one-two top-five/ten punch. Furthermore, it pairs two of the nicest, press-friendly riders in the industry. Needless to say, the team won’t have a problem garnering exposure.

It’s great you guys mentioned Toyota/JGR Yamaha, but you missed the team that is actually voted into second: Monster Energy Kawasaki. They were given 14.5 percent of the vote, more than JGR at 11 percent. I like the moves they made, but I don’t understand how you can lose the best rider in the world and be second. I think a lot of it rides on Millsaps’ recent win just a few weeks ago. That has to stick in voters’ minds. Weege, what’s going on here?

Weege: I think the voters are drunk. Yes, Monster Energy Kawasaki added Millsaps and Hahn—two good riders—but they lost Ryan Villopoto. These two noobs will have to have career years (i.e. win the supercross championship) for it not to look like a net loss for Kawasaki. It's not really a fair fight for any riders, anyway—the Miami Heat can just find a direct replacement for LeBron James, either. Kawi in the U.S. wanted Villopoto to stay, but he didn't. That hurts.

I agree that Brayton to BTO makes that team even better because Brayton can put that bike on the SX podium, and I'm not sure Goerke could have gotten there. But Brayton and Shorty are kind of similar guys, no? Nice, solid guys. But some teams like to go match some flash with that solidity—it's why JGR always teamed Brayton with Josh Grant, the anti-Brayton.

Speaking of that, you know what's a legitimate upgrade? Chad Reed added Grant to his team and Yoshimura Suzuki added Blake Baggett without taking anything away. It was a bit risky staking everything to just Reed or James Stewart. Now these teams have a real backup plan in case the best-case scenario doesn't come to fruition. I think this is especially big for the Yosh team, because we've even heard rumors of its demise at times. Instead, they added a spot. That says something...now can we get a Suzuki 250 out there, please?

But the stuff I'm talking about is all reputation stuff. Discount Tire/TwoTwo Motorsports and Yoshimura Suzuki look stronger just having a second guy. BTOSports.com KTM has now firmly entrenched itself into the clean-cut demo. Does any of that stuff even matter, JT? Do sponsors actually just care about results more than how things look?

JT: I do think it matters, for a variety of reasons. Sponsors are always concerned with having a bike on the track, preferably their best rider, but in the end someone needs to be out there. Having a backup plan is a huge insurance policy for these teams. Last year when Reed went down, they were scrambling to find someone to put the Discount Tire/TwoTwo Motorsport Kawasaki on the track. Luckily, Mitch Payton allowed Dean Wilson to step over and take the opportunity, but that may not always be possible. Having that legitimate second rider is really important.

As far as the clean-cut demographic you alluded to, I think it really depends on the sponsors involved and the image that the team hopes to portray. For a team like BTOSports.com KTM, it is the perfect combination of riders. Family values and ideal representation are easy to see in this team’s marketing strategy. Any company can sign onto this effort with zero worry about being embarrassed in any sort of scandal. Oh, and if you are worried about their results not being up to par, keep in mind that Justin Brayton was one aggressive move away from winning the Phoenix round in 2014.

Weege: Oh, I’m not worried about the results. No one is a bigger fan of the perfect 10 (that’s Brayton, people) than I am.

Stallo: Another move that is not getting a lot of attention, mainly due to the fact that he is staying with the same team—albeit moving up—is Rockstar Energy Racing Husqvarna hanging onto Jason Anderson. The team stuck with Anderson through some difficult times early in his career, and he rewarded them with their first 250SX West Region title in 2014. With Millsaps out last year, the team fielded a number of riders in his place: Ivan Tedesco, Cole Thompson, and Ryan Sipes. Millsaps looked to be on his way out, anyway. Keeping Anderson provides an upgrade and an option for a long-term 450 rider. Anderson, who stands nearly six feet tall, has adapted to the 450 quickly—winning in Sweden and setting the fastest qualifying time at Monster Energy Cup—and could make some noise in his rookie season.

One move that I thought would garner more attention was Red Bull KTM picking up Dean Wilson to pair with Dungey. A lot of steam was taken out of his upcoming rookie season after struggling a bit in his fill-in role last year, but if you look at it from a pure speed standpoint, he made noise. Given he will have an entire off-season to progress fitness wise—his main problem last year—Wilson may prove to be a very good piece to stash alongside Dungey.

Jason Weigandt: With Anderson, suddenly Husqvarna went from not even racing to having a fairly high profile part of the 450 pack. Can you get a bigger upgrade than that? What's helpful is that Husky is a clean slate. Anderson doesn't have to follow in anyone's wheel tracks. If he snags a few good finishes in his rookie year, it's a win for him and the brand.

You mentioned Wilson, and let's also talk about Cole Seely. They're rookies but also essentially taking the spots of Roczen and Barcia. Those are big shoes to fill. Seely has proven sneaky good on the 450 in supercross, but I think people are on the fence with Wilson because the last few years have been rough on him. If he can solve his arm pump problems from last year, he’s going to be good. If you're KTM and you lose the Roczen sweepstakes, Wilson isn't a terrible consolation prize. Honda would have liked to keep Barcia (possibly still with Seely, also), but he left, and Seely is no joke. If you're Kawasaki, Honda, and KTM, you lost something big during this off-season. They were lucky to find some good pieces to fill in some of the gap.