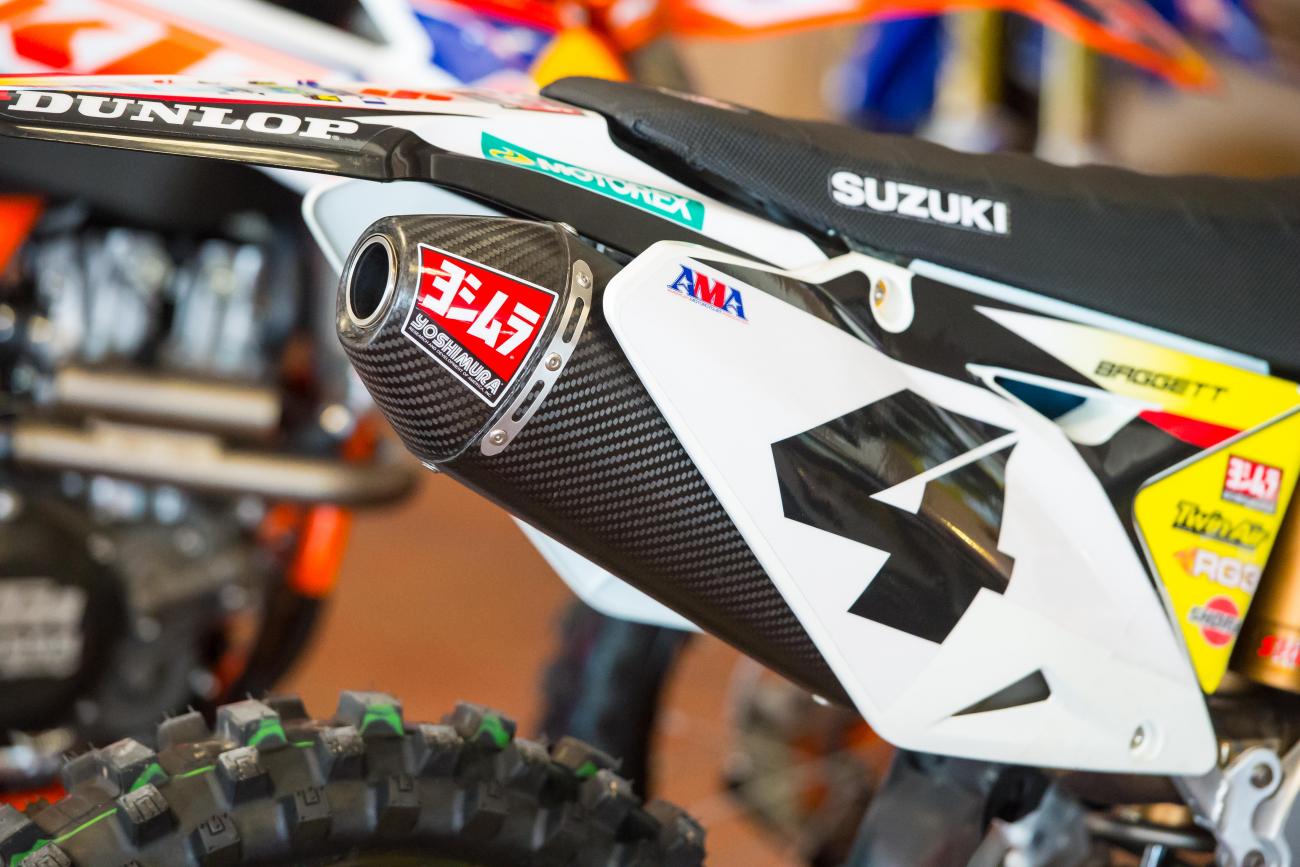 It's still 2014, but the Monster Energy Cup marked the start of 2015 livery for many teams, with new riders, numbers, brands and graphics on display. There will be more at Anaheim 1, but who wants to wait that long? Let's roll in some slick new bike pics.

Anderson will sport this new digit for his 450 debut season. It’s been awhile since we've seen a factory Husky on a supercross track, and they were actually yellow back then (ask our guy Jason Thomas about it). Most thought these white bikes looked cool, and while, yes, they're based on KTMs, take a gander at the exclusive-to-Husky plastic subframe the next time you're cruising the pits.

That's not Ricky Carmichael anymore, as BB has taken his national digit to a Suzuki RM-Z450. He and the number looked good on it throughout the weekend.

You've seen Trey's number on red before, but note the full admission that those are now KYB forks (the tubes were left blank at the last few nationals). And while you're noting that graphic, note that the old Muscle Milk logos are missing. And....what the heck is that #1 Suzuki over there? James Stewart's defending MEC Champion bike? That was it; the only chance to see JS7 become JS1 is over.

JG pulled out of Red Bull Straight Rhythm at the last minute, so this was the first look at the 33 in green since his Jeff Ward Racing ride a few years back. But forget all that, everyone just wanted to see those crazy yellow Pirellis!

Josh had a two-race Pro Circuit deal for this race and RBSR, and his 450 looked like this. Check out those tattoo style graphics.

Going into the race, we thought this would be the first and last time you'd see little Hill running the 450 for a while. However, based on his performance, we wouldn't be surprised to see it come out again during East Region races.

You've seen it before, but, those tires! Also, you can see Barcia's new bike in the back but we've shown you plenty of that before.

Cole was cool enough to call Kevin Windham about taking the 14, but, still, going to take a long time to not immediately think K-Dub when you see it. Seely crashed out in practice so we didn't get to see it in the race.

Looks similar to before, but those are also KYB forks at work. Also, carbon fiber is cool.

Weimer was the 450 Pro Circuit teammate of Josh Hill for the weekend. Mitch Payton says this is not expected to be a 2015 deal for either rider, so you'll only see this number/bike/team/rider combo once. Well, unless some big sponsor wants to come along and help pay for it next year. Anyone want to step up and help some deserving dudes?

Semi-sorta new ride, although we did see it two weeks ago at RBSR. Deano struggled at the MEC, so let's just pretend we didn't actually see it in Vegas and reserve all judgement for Anaheim. Hey, did anyone expect Justin Hill to be the best of the 450 KTM bunch?