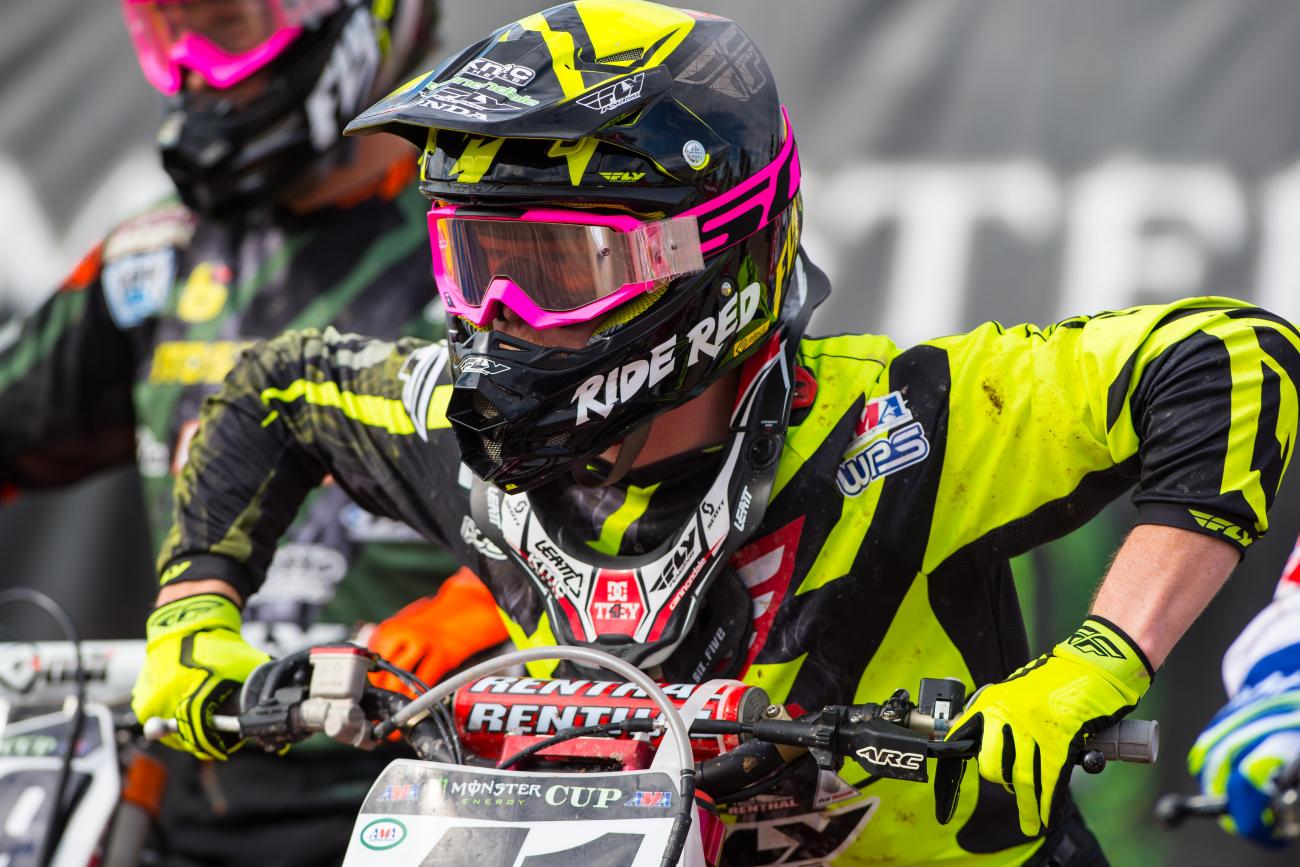 3 on 3 Questions After MEC

1. Without Ryan Villopoto, James Stewart, Ken Roczen and others in action, is a good result at the Monster Energy Cup a big deal?

Jason Weigandt: It’s a big deal specifically because of who did well. The two riders who won races on Saturday were Trey Canard and Davi Millsaps, and they had more to prove to themselves than anyone else. For Millsaps, there’s the obvious return from a long layoff. He was nervous all day because he had to prove to himself he still had “it” while also switching to a new bike and team. Regardless of who Davi beat, he rode well, and he just needed to prove that to himself for now. With that handled, 2015 will be much easier.

Canard and his team obviously turned a corner with their motorcycle late this summer. This was another chance to see if the changes they made are correct, in a setting that’s a little closer to supercross. He didn’t get the Monster Million, but he proved to himself he’s going in the right direction. Doesn’t matter who he beat, the fact that he rode well is all that matters.

Chase Stallo: While the loss of Stewart, Villopoto and Roczen may have diluted the product on the track for some (personally, I’m not of that belief) let’s not let that take anything away from Millsaps and Canard, and if you want to look further down the line, Justin Hill. I’ve never been a proponent of putting an “asterisk” next to someone due to the absence of a certain rider(s). You race against who is in front of you. To further the point, let’s not forget that Canard won four of the last five motos in Lucas Oil Pro Motocross, ahead of Roczen. And let’s not forget that Millsaps finished second in Monster Energy Supercross in 2012 and 2013, ahead of, you know, James Stewart. Some star power was lost, but anytime you send Tomac, Barcia, Reed, Dungey, Baggett, Anderson, Wilson (all former champions), among others, to the line, a win is a win in my book.

Hansel: As I cruised through the pits on Saturday I found myself asking a lot of teams and riders a very similar question. Some of them answered that this race doesn't matter no matter what, while others said that the only reason a rider would say that is because he isn't prepared and is offering a pre-excuse. To an extent, I think both are right. A lot of riders begin their supercross fitness programs after the Monster Energy Cup, and many have limited time with their new teams, which means that no matter what, the action that took place on the basic, whoop-less track at the MEC is far from an actual preview of what we'll see at A1. For the most part, riders who didn't fare well here needn't be concerned—I doubt Chad Reed went home and put his fist through a wall because he didn't win the thing. And for the ones who were bummed afterward, like Justin Barcia, they've got two months to work on things.

However, for the riders who did do well, it is a big deal, regardless of who was or wasn't there. Sure, Stewart and Roczen will be factors next year, but RV won't, so the fact that he wasn't there is meaningless. The mental aspect of racing is huge, and guys like Davi Millsaps, Trey Canard and Justin Hill gained some peace of mind (and some cash) on Saturday night in knowing that they'll be competitive in January. That's an advantage, and anything that helps you win races is a big deal.

2. We've seen more big names switch brands this year than usual. But will any of these big changes make a difference?

Jason Weigandt: Not as big a difference these teams and riders probably hope. Look, I’ll give credit that none of these dudes spewed the standard “I was immediately three seconds a lap faster on my new bike” because that’s just lies. Still, all the talk has of course been positive. These are competitive, head strong (or, at least trying to be head strong) athletes who want to believe they’re invincible. In their mind, they’re just a bike/team/trainer change away from dominating every race. That’s the mindset you have to have. So, change is usually good and that’s why we rarely see riders stay on one brand for very long.

Right now they all expect to dominate. Truth is, rider always counts more than bike in this sport and any equipment change(s) can only do so much. I think most of the results you’ll see in 2015 would have been the same no matter what color the guys are riding. Settings and equipment make a difference, but, in general, you are who you are.

Stallo: Ah, what I like to call the backup quarterback effect. Fans always clamor for the guy on the bench. “If only we had so and so playing our season would be different.” Then, you know, Kirk Cousins actually plays. We all know what happens next. Look, every rider that switched teams this off-season is going to go above and beyond to praise their new colors. “I (insert name) love the (insert new brand). It really fits my style.” And they should. They are hired to do that. Let’s wait until April and see where everyone stands. The grass always looks greener until you actually see the checkers.

Hansel: It can be. Just look at Martin Davalos. After never winning a 250SX race, he finally broke through last year with Monster Energy/Pro Circuit Kawasaki and was in a position to take home the title until he got injured. It took awhile, but he finally found the combo. Look at Jeremy McGrath, who went from Honda to Suzuki in 1997. After winning fourteen of fifteen races in 1996, The King only won two races in 1997 and lost the title to Jeff Emig. Part of that was due to the fact that he had minimal time aboard the new bike before the start of the series, but the fact remains, he changed his situation and it made a difference. Sometimes it doesn't matter (Ricky Carmichael), and sometimes it's all about what makes a rider happy (Chad Reed). We'll just have to wait and see on this one.

3. Oh boy, November and December. What will keep fans entertained until A1?

Weigandt: Don’t act bored. We’re in a great time where social media gives us access that we’ve never had before. Keep up on the Instagram account of your faves and you’ll see video clips of them at the test track, which is the kind of stuff I would have KILLED for in 1995. You know how many test track videos we had back then? Absolutely zero. Consider yourself lucky.

Stallo: Since Weege already touched on the new digital age that keeps everyone plugged in, let’s look at some actual races that will tide you over. Bercy Supercross is November 15-16, which always provides some fireworks. Justin Barcia, anyone? We also have the Geneva Supercross on December 5-6, with some big names expected to attend. For the first time in history, supercross is heading to Africa on November 1, as the city of Loftus Versfeld, in Pretoria, South Africa plays host. Darryn Durham, Josh Hill, Jake Weimer and Cody Gilmore are a few big names expected to attend. The Australian Supercross series still has a round left to go. There will also be some supercross races across Europe that many Americans race. While they may not be Anaheim 1, it should keep you occupied until January.

Hansel: Depending on where you live, November and December can be a pretty magical time of the year for riding dirt bikes. I live in Chico in Northern California, where it stays pretty hot and dry until about mid-October. Then the cooler weather starts to slowly creep in, which, at least for me, makes riding much more enticing. There's nothing quite like the bite of crisp air to keep you cool, focused and enthusiastic as you battle your way around the local track at a furious pace with a few of your C-Class riding buddies. I can ride longer motos (12 minutes instead of 10) and spend a longer at the track when it's cool, crisp, and damp as opposed to when it's stiflingly hot and dusty.

Don't get me started on the first few rains of the season, either. There are some pretty epic trails around here, but when they're dry, you might as well try to make your way through a corn maze in a blinding dust storm. When they're damp, it's like blasting through heaven, if the soil in heaven is made out of Velcro with plenty of puddles to wheelie through and send sheets of water flying through the air to soak an unsuspecting riding buddy. So in summary, if you live in a climate that's similar to what I've just described, you're going to stay entertained by riding as often as possible and having friends over for bike maintenance/beer drinking sessions in the garage. Just be sure to double-check your work in the morning!