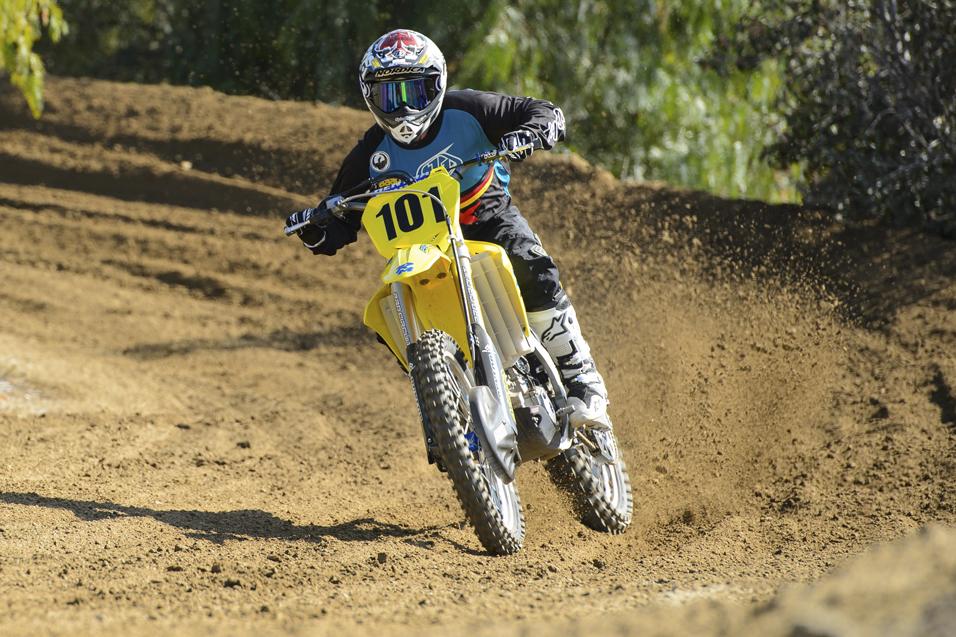 I trust your knowledge and find your opinion/point of view interesting whether or not I agree with it. So I thought perhaps you could help me. What the heck ever happened to riders having fins on their helmet? Was it just some sort of style fad that faded out or was there actually a specific ergonomic purpose behind them? Any insight would be greatly appreciated.

Anyway, keep on being awesome.

Some trends are created out of function, such as boot gators. They kept your boots free and clear of mud and debris so every rider had to have a pair back in 1983. Black plastic on your bike ensures that every rider at the track knows you are part of the Metal Mulisha. Others trends, like the helmet fin, are entirely cosmetic. Troy Lee designed the stick-on fins as a way to give an otherwise round object some depth and definition. This is the same guy who designed helmets with flags, hundred dollar bills, crowns, LED lights and a million other elements in them. That’s what happens after so many years of smelling paint fumes. The fins lasted a few years and then disappeared faster than a pot of coffee at an AA meeting. Will they ever come back? Well, I would never have thought guys would walk around in skinny girl’s jeans but that is exactly what’s happening. Never say never when it comes to fashion.

My question is what happened to the neck braces in the pro ranks? If I'm not wrong there where a whole lot more riders wearing them than there are now, including level headed folks like Dungey and not so level headed guys like you. I bought one of the early Leatt models and made a point of riding with it every time I mounted my ride, no exceptions. I never thought of it, it became second nature, never thought of it being my life saver always by my side, just as I wasn't thinking my shock would blow apart on the face of a triple jump, but it did. Guess what was there to save my life? Yes, the neck brace! I still broke two vertebrae in my neck, but they didn't displace.

There can be arguments decided both ways, as to what would have happened without it, I'm sure. Please enlighten me why the pros are invincible once again and what is your personal stand on this?

Thanks and regards from Germany,

I’ve asked this question to many riders over the past couple years and they all tell me the same thing: They feel better on the bike without it. For these guys it comes down to seconds and tenths of a second, so any little advantage counts. If they can knock a second off their lap time because they feel more relaxed and looser they are going to leave the brace in the garage. That is a risk they are willing to take. While guys like Reed and Ryno have been vocal about their dislike of the braces I think their opinions are misinformed. And to the guys who think they ride better without one I like to say, “I don’t know, seems like three-time champ Ryan Villopoto still rides pretty well with a brace on.”

As for me, I wear a Leatt when I ride. I get called out by the internet police when a photo surfaces of me riding without one but those photos are from TLD or Racer X photo shoots where the point is to display new riding gear. When I’m actually riding laps I stop and put it on. Every man has to make his own decision on this. Why wouldn’t you make every effort to avoid injury?

I know you will have great insight on my question since you have raced for a long time. My question is: Are supercross tracks easier today then back in the day? Say maybe mid 1990's till around early 2000's. Since youtube is basically my motocross TV station I can't help but see how much more technical the tracks were. For instance, look at how rough that 1992 L.A. coliseum supercross race was for those guys. And just look at any 2001 supercross track built, those jumps were huge!!  Since those tracks were way more technical racing had to be slowed down to ride that track. Guys were closer together, more mistakes were made and the race lasted longer. Today watching these races I can't but help but see how fast these guys go around the track. I know the bikes are better and so are the riders from the evolution of riding styles but these tracks are just making them go even faster. Maybe you can sneak in and replace a track diagram from the 2001 series. I would love to see these guys on those tracks. Thanks, hope my question makes it.

I don’t want to be one of those guys who say everything was tougher back when they were doing it. However, I think most would agree that tracks were more technical back in the early 2000s. Whoops were bigger, turns were tighter with bigger berms and lap times were longer. Some of the problem stems from the insane amount of horsepower the bikes put out now. Triples are all doable from the far inside of the turn, rhythm lanes are jumped in sets of three and four instead of two or three and straight away speeds are faster than ever. My opinion is that the answer lies in slowing the tracks down. Make it tighter and slower and try to create more mistakes at low speeds. That will translate into better racing and if a rider does go down he’ll do it at a slower speed and have a better chance of finishing the race on his bike instead of riding a gurney to the ER. There are a lot of other good suggestions out there… what’s yours?