The Houston track worked out pretty well overall, with no major complaints heard in the pits. Several riders explained that the dirt was soft on top but hard on the bottom, which gave it a strange combination of ruts in spots, which slicker spots underneath. Also, the whoops were massive when practice began, and many expected them to get smaller as they broke down. But, the dirt was hard enough to hold. The track crew ended up refacing them to take some of the steepness out of each whoop, and that made the section much easier. When the day started, the whoops were so tough that even some top 450 riders were struggling to blitz all the way across.

The ruts made enough of a difference to where a few obstacles got harder to do by the end of the race. After the whoops came a 180 bowl turn, and a few riders were tripling out of it and landing on a table top. By the late laps of the 450 main, only the top five 450 riders were still able to do it.

There at least appeared to be some cracks in the very formidable armor of Ryan Villopoto, as he was only fifth fastest in practice. However, he was turning in a hot lap on the final lap of the session but ended up getting slowed by Weston Peick in the very last turn. Sometimes, practice just comes down to who gets in the cleanest lap. RV was on point once the races began, as he won his heat with a good start and that got another one in the main. We asked Ryan after the race what’s different between him now and at the beginning of the season, and he simply said that everything is better, both himself and the bike. But while the five-race win streak is nice (and the longest of his career), he said his lead still isn’t enough to where he can cruise. That’s bad news for everyone else. 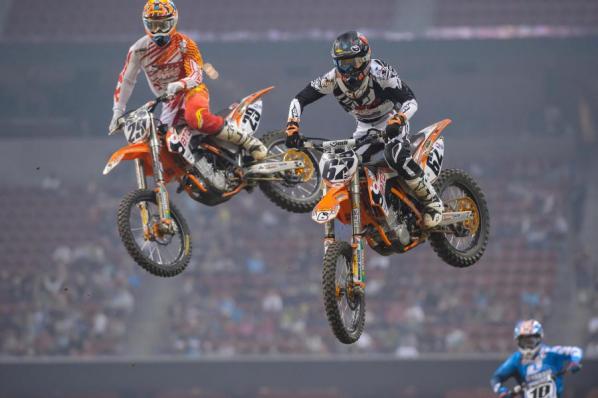 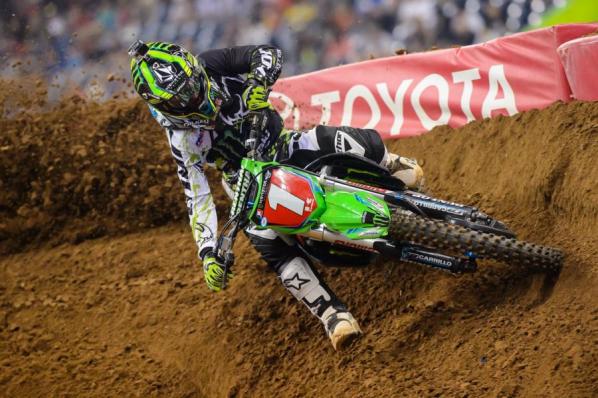 Villopoto ripped it up. Did you know he's undefeated since he switched to new triple clamps in St. Louis?
Simon Cudby photos

That said, Ryan Dungey once again looked like a match for Villopoto's speed, but he started behind him in the main and couldn't make up the needed ground. You could see a little frustration creep forward for Ryan Dungey after the race, who once again rode well but also lost three more points to the streaking Villopoto. As always, Dungey just keeps working. He said the team did some supercross and outdoor testing right after the Toronto race, then he kept hammering down outside of a short break last weekend for Easter. He says they have pretty much leveled out with bike work, as a fork setting change at Toronto was the last major change they have made to the bike.

Trey Canard’s podium might as well have been a win, as he hadn’t finished on the box since Anaheim 2, which was round three of the series back in January! After the race, Trey wouldn’t really reveal what changed after those early races, and what changed again for this one, but he did say he knows what the problem were, and he feels much better now. We pressed for more and he admitted that, for example, he now has a new clutch part that helped his starts—and he got two good ones in Houston so it must have worked.

Canard admitted the pace was pretty fast up front, and he got a little winded trying to match up to the Ryans. James Stewart, too, looked a little quicker than Canard and was able to pass him and pull away a bit. But then Stewart crashed by himself when he appeared to lose the front end on a roller before the finish line jump. Canard rode solid the rest of the way to keep his teammate Barcia at bay and collect a podium. 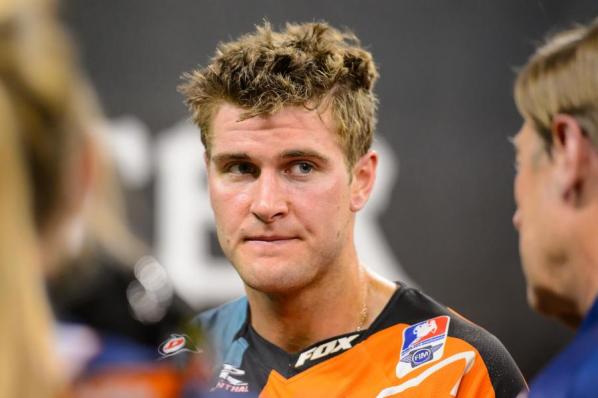 Time is running out for Dungey. He needs a win in his home race next weekend in Minneapolis. 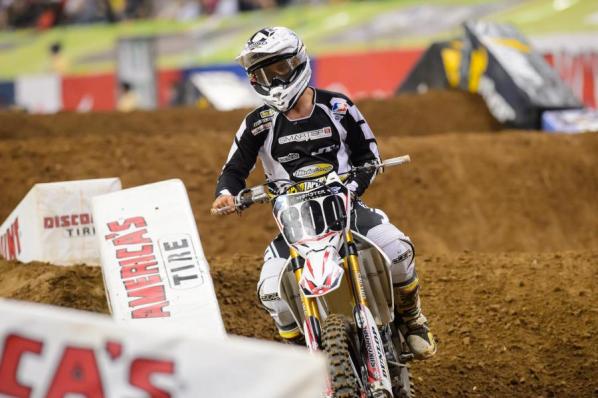 Mike Alessi gave it all he had.
Simon Cudby photos

Big progress for Justin Brayton, who finished sixth after several runs outside the top ten. Brayton was happy with the result, but he said he still wasn't totally satisfied with his riding. Still, it was a much-needed boost.

Mike Alessi ain't scared. He pulled the holeshot in both his heat and the main and fought for each spot. He was running in sixth with Brayton close in when he went down in the whoops, ending his night.

It was Andrew Short versus the Dodge/Sycuan RCH teammates, as Short ran it in on Broc Tickle battling for tenth, and Tickle ended up on the ground. “He took me out,” said Tickle. The two have had some run ins this year, including a hit by Short on Tickle in San Diego, and some return fire from Tickle in Daytona. Tickle also says Short got him several times last year. Then, on the last lap, Short put in a strong charge and elbowed his way inside of Hill in the last corner to steal seventh. Hill says he was mad for about “five seconds” and actually stuffed Short hard in the corner after the finish! He then apologized and they shook hands. “Hey, if I had been in that position, I realized I would have done the same thing,” said Hill.

Turned out to be a banner night for team N-Fab TiLUBE Yamaha, which once again put all three team riders (Chris Blose, Phil Nicoletti and Bobby Kiniry) into the main. It was rocky at first, though, as Nicoletti and Kiniry started second and third in their heat, and but then ended up going down together in the second turn. Blose qualified via his heat, and then Nicoletti and Kiniry started 1-2 in the LCQ and fended off some challenges to put all three team bikes into the show. Nicoletti was set for a strong ninth-place finish, but he crashed into some tuff blocks on the very last lap and finished 12th.

Jake Weimer and Matt Goerke came together in the main and ended up on the ground, then Goerke crashed again a few laps later. Riders were getting aggressive trying to make passes. Weimer recovered for ninth, Goerke was 11th after cruising past the downed Nicoletti on the last lap.