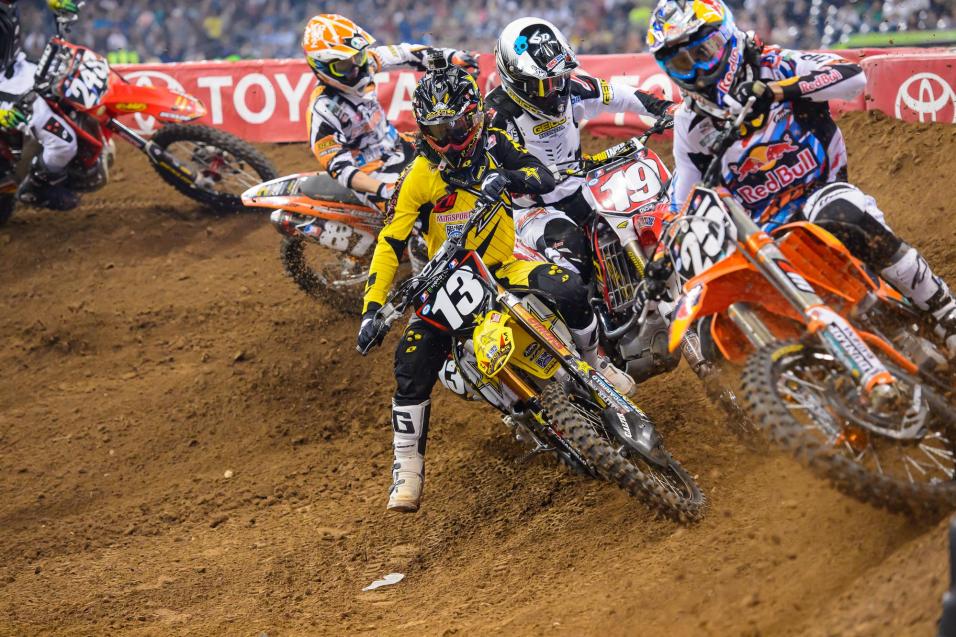 By Jordan Roberts and Jason Weigandt

It’s pretty hard to top two seasons that resulted in championships, but it’s very easy to make that case that Ryan Villopoto is riding better now that he ever has before. After a basically unchallenged performance netted the Monster Energy Kawasaki rider a win at Reliant Stadium in Houston, Texas, Villopoto now holds a five-race winning streak in Monster Energy Supercross, the longest streak of his career. His points lead is growing rapidly, too, with second-place points man Davi Millsaps taking fifth and third-place Ryan Dungey taking his third second-place finish in the last four races.

Villopoto’s script was similar in each race. In his heat, Mike Alessi grabbed the holeshot on his MotoConcepts ride, and Villopoto soon shot past and into the lead. The main was actually quite similar, with another Alessi holeshot and another pass by Villopoto to take the lead. Honda Muscle Milk’s Trey Canard had been on the gas all day, looking strong in practice and winning his heat. He started third, with Dungey, James Stewart (Yoshimura Suzuki) and Justin Barcia (Muscle Milk Honda) next in line. That entire group was eventually able to clear Alessi. While Villopoto was working on extending his lead, a three-man battle was brewing between Canard, Dungey and Stewart for second. Dungey got a good drive through the whoops to challenge Canard and made a pass stick upon exit of the proceeding turn. Stewart wasn’t one to sit back and watch the events unfold. A few turns later, he too made a pass on Canard while exiting a turn by jumping past him on a single. 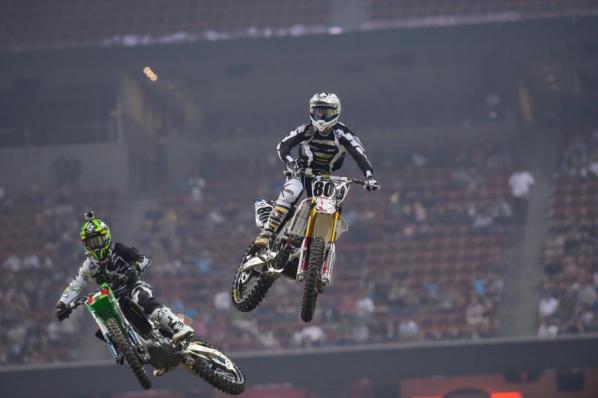 Alessi got another holeshot, then Villopoto made the move for the lead. 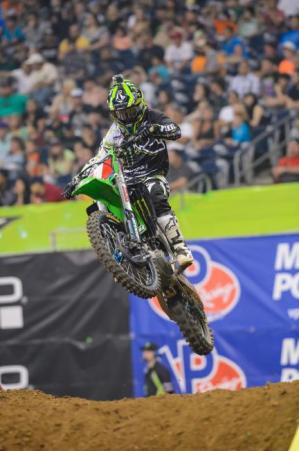 Villopoto was gone from there. 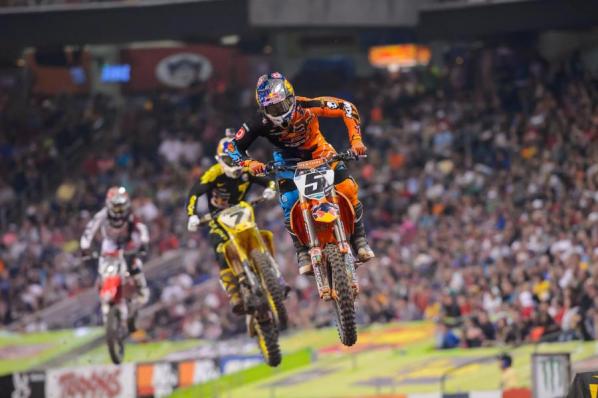 The real battle was for second. Dungey and Stewart passed Canard and Alessi, then Stewart crashed. 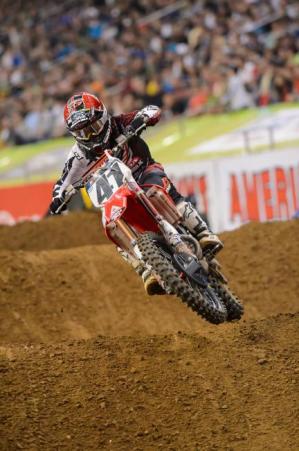 Stewart held third for the next couple of laps and put some pressure on Dungey, until a costly mistake in the corner before the finish line left his Suzuki laying on top of him for a brief moment. He remounted, but something was visibly wrong. He rolled the track until he was able to exit into the mechanics area.

Dungey looked aggressive for the remainder of the race, and possibly closed a portion of the gap between himself and Villopoto, but the defending champ rode unchallenged from the second lap to the checkered flag. Villopoto took his fifth-straight win, and eighth total, in the 450SX series.

Dungey was left in second, and Canard took third back when Stewart fell. Canard held it to the end to take third, his first podium finish since round three of the series in Anaheim. Barcia came through next, while Millsaps (Rockstar Energy Racing) rounded out the top five after getting off to a bad start.

Justin Brayton (JGR Toyota Yamaha) was sixth. It looked like Dodge/Sycuan’s Josh Hill was going to net seventh, but Andrew Short (BTOSports.com KTM) battled him in the last corner, elbowed his way inside, and stole the spot just a few feet before the finish. This pushed Hill back to eighth, but that’s still he best of the season and a breakthrough of sorts. They were followed by Monster Energy Kawasaki’s Jake Weimer, who had a tangle with Matt Goerke, and Hill’s teammate Broc Tickle, who also had a run-in with Short. 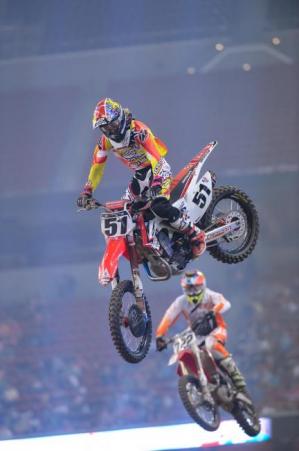 Barcia had a quiet fourth. 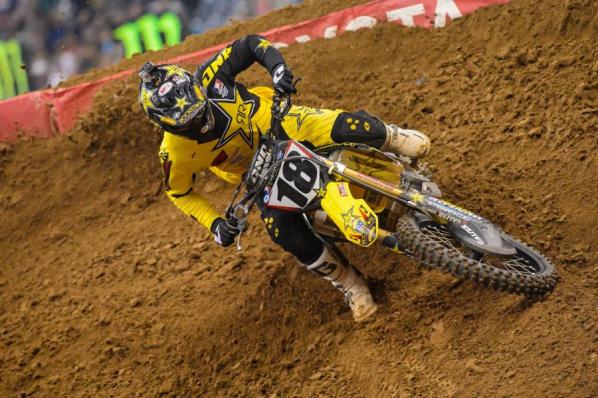 Bad start and a fifth-place finish for Millsaps.
Cudby photo

GECIO Honda’s Wil Hahn and Red Bull KTM’s Marvin Musquin cleaned up in their heat races, taking convincing wins going into the main event. Since they’re also 1-2 in points, it seemed obvious the main event win would come from either one of them. Ah, but that’s why they run the races.

There was a five-plus rider crash in the first turn of the main event, but Zach Freeberg emerged as the early race leader in front of Blake Wharton (Rockstar Energy Racing) and Musquin. Freeberg was unable to hold the top position for long. Wharton and Musquin quickly moved by and began their own battle for first. Musquin, riding a three-race win streak put a pass on Wharton, but Wharton fired back with several pass attempts in the next few turns. He finally made one stick, getting under the Frenchman over a triple to regain the lead after the beginning of the second lap. Hahn was close enough to witness the two dicing back and forth. 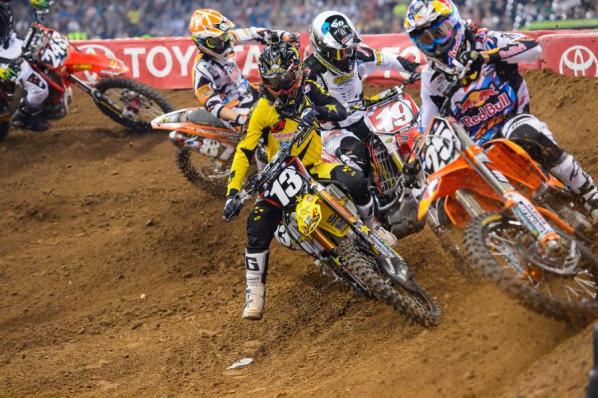 There was some action in the 250 class. 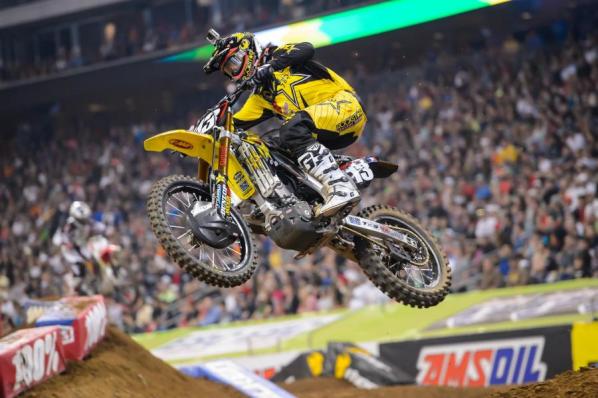 Wharton was passed by Musquin but then passed him back. 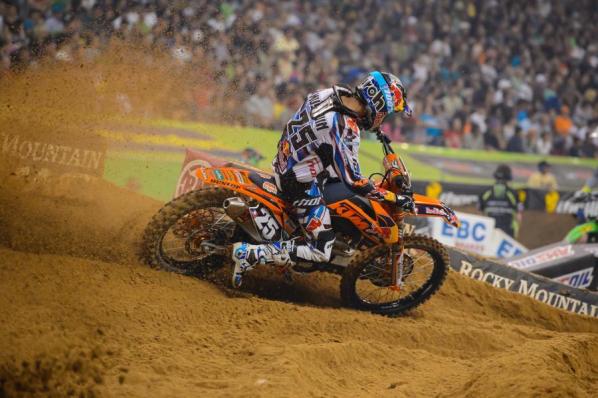 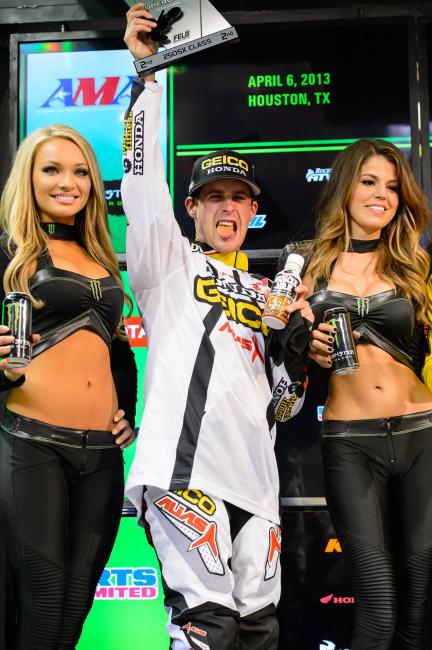 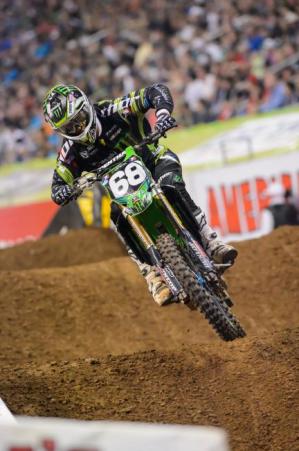 Here is what Tyler Bowers looks like on the PC bike.
Simon Cudby photos

Meanwhile, Monster Energy Pro Circuit Kawasaki’s Tyler Bowers had moved into fifth place by lap four, a solid ride by the three-time AX Champion making his ‘13 supercross debut. But Wharton, Musquin and Hahn had already begun separating themselves from the rest of the pack. Musquin looked poised to make a move on Wharton while blitzing the whoop section, but then he went off the track and into the tuff blocks, dropping his bike in the process. Musquin reentered the track and immediately got into a three-rider battle with Bowers and Lance Vincent. Musquin was able to get past the two, but not until the sixth lap.

Wharton had some breathing room by this point, but a few more laps allowed Hahn to close the gap on Wharton’s lead. Hahn tried to make a move on Wharton from the outside of the turn before the finish line, but Wharton shut the door and forced Hahn to roll the jump. Wharton once again had room to breathe. Hahn started closing back in, but two more mistakes in the same finish line area sealed his fate. Wharton grabbed his first win of the season in front of a hometown crowd. He is also the first person in supercross history to win a main event with the number 13.

Hahn still takes a small victory in adding two more points to his lead over Musquin, now standing at eight with two events to go.