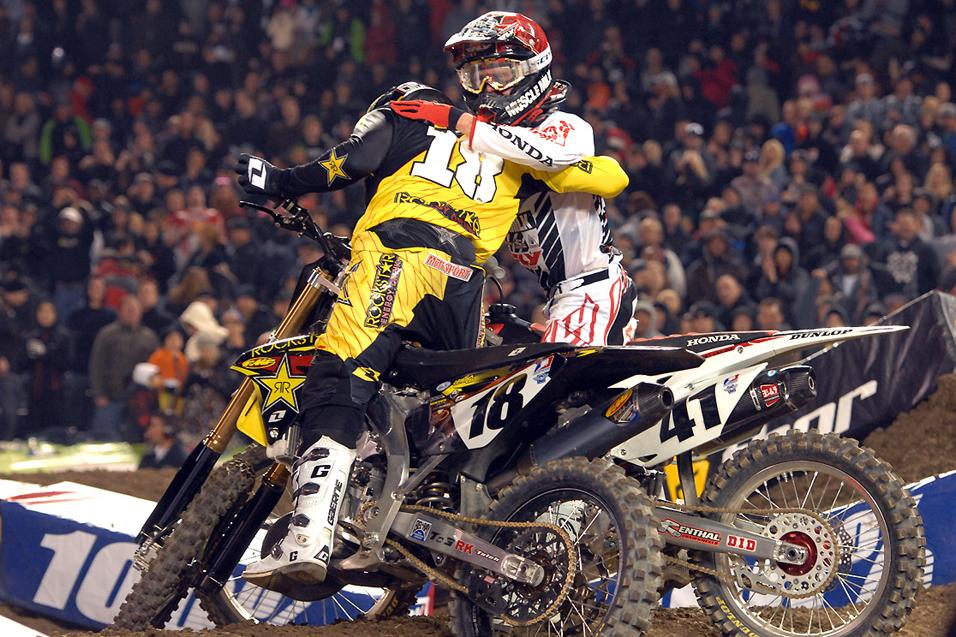 In the television world, it's called the ensemble cast. You build a show around several characters roughly equal in importance and develop storylines around each of them. It differs from the typical movie script, which uses only a central character or two, and places everyone else in supporting roles. Since TV has to churn out different plots week after week, the ensemble plan works better.

Works a lot better for racing, too, since, like a TV show, it's a series and not a single feature. But this sport rarely follows that model. Heck, a season with just two lead dogs is considered exceptional to us. So we're all pumped on 2013 because there are four characters that are well known to the fans, and all four of them have won this Monster Energy Supercross title before. That alone gets us excited. But then the Anaheim 1 opener worked like an open audition.

For about 15 laps, none of the four main stars were even in podium spots. Instead, several other riders went straight to the top, and the race was so crazy that it's going to take a long time to untangle it. The RV/Dungey/Reed/Stewart quad is not going to just re-take over this weekend in Phoenix. It's too messy right now. And, regardless if Davi Millsaps sinks or swims from here on out, he's going to be a story. If Davi wins again in Phoenix everyone will talk about it, of course, but if he finishes tenth, everyone will still ask: “So, what happened with Millsaps?” Before Anaheim 1, a tenth place finish for Millsaps in Phoenix would not have been news. Now, it will stoke the bench-racing flames. With Millsaps, we've just added another main character that you'll have to keep an eye on for a while. 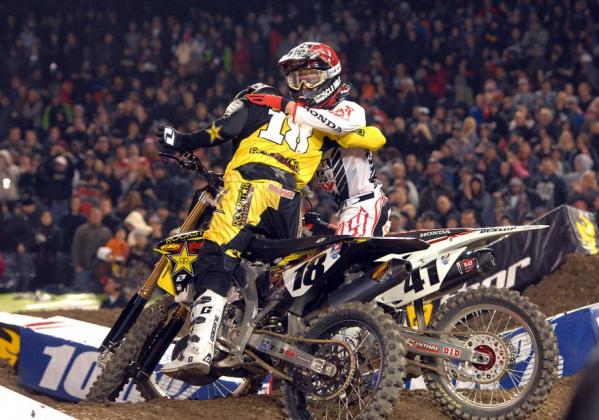 And you know what? Millsaps' win proves a victory is possible for many other riders. A few months ago, we interviewed with Millsaps’ mentor Ezra Lusk on this site, and Ezra said his main project is to make Davi believe he can be one of the top guys. But it's not easy to make that leap, mentally. Before the race, everyone had Millsaps sitting firmly in what's been dubbed the “second tier.” Now that he's made the leap, other riders in that group, the Josh Grant/Andrew Short/Jake Weimer/Justin Braytons of the world will surely look at that and say, “Hey, I've raced with Davi before. If he can do it, I can do it.”

Is it true? Well, Davi has always had elite-level talent and perhaps he's able to take a leap higher than the others. But at least for a moment, his win has raised the potential ceiling of a half-dozen other racers, and stuff like that really matters in a sport so defined by the mental game.

So Anaheim 1 made Millsaps a main player in the show. Good or bad, we'll be watching him closely. We also now have Trey Canard on board. Okay, we knew Canard's comeback would make a great story, but in this sport you have to contend for wins for that story to be truly relevant. No doubt that he's there now.

Heading into this race, everyone wanted to see Canard do well. There is no greater injustice in sports than an athlete with talent and desire who has it all taken away by injuries. Yeah, we're intrigued by those who simply burned their talent (key "Where's J-Law?" for the 7346th time), but it's much, much sadder when a kid does everything right and doesn't get rewarded for it. And yet, there was a very real chance that Canard was going to have to walk away from the sport with only a fraction of his potential fulfilled.

Whew! That's not going to be the case. I talked to quite a few people in Trey's camp this weekend, and they all indicated that he's riding even better than he was pre-injury. Not only did he get hsi health and strength back, but he has gelled with the new 2013 Honda. It was obvious from practice that he still has it. You want to talk storylines? As amazing and awesome and impressive as Millsaps' win was, a victory by Canard would have been even more shocking. Would you not put “returning from a year-off with a broken back with a win at Anaheim 1” as one of the all-time great wins in the history of this sport? Or any sport? Didn't happen, but the potential is there, and now this is a story we'll have to follow. Canard is back, the injury is behind him and I submit he really may be better than ever now. In the past, Trey has always been too hard on himself, but now he's so grateful just to be racing at all, I think that pressure is finally off. He's going to be good and that's a great story to watch. 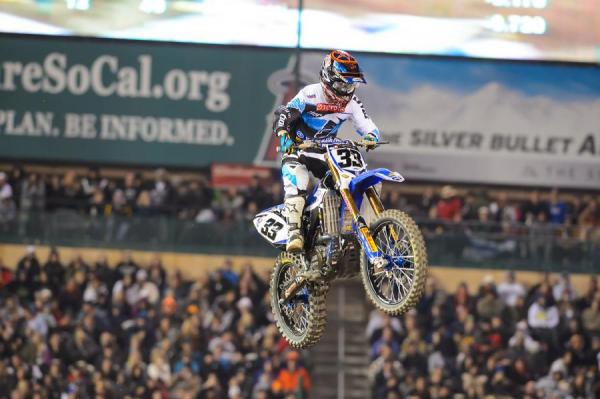 Will Millsaps' win give confidence to others, like Josh Grant?
Simon Cudby photo

Justin Barcia finished seventh, but he didn't disappoint, either. I was surprised to hear he was apparently quite nervous during the day and didn't ride like himself, because I predicted Bam Bam would be immune to such things. I guess the pressure of Anaheim 1 trumps even the most confident riders. Anyway, even on a night that wasn't so good for him, Barcia won a heat race and was in contention for the lead for most of the way. He'll be better (as soon as this weekend) so look out.

To that matrix—Millsaps, Canard and Barcia being real players, plus the potential confidence boost to several others—we add the usual suspects. Chad Reed never looked fast but he ended up right where he needed to be, in fourth. Ryan Dungey wasn't spectacular, either, but he's Ryan Dungey so he'll be there for the long haul. Stewart's status is unknown, but as always with him, it's a story regardless of it's good or bad. And while Ryan Villopoto certainly holds the potential to dominate, he's dug himself a big enough hole to where he can't flip things 180 very quickly. Even if RV crushes the field this weekend, the others put too big of a foot forward to be counted out this early. In other words, this ensemble is going to be here for a while. Enjoy the show.