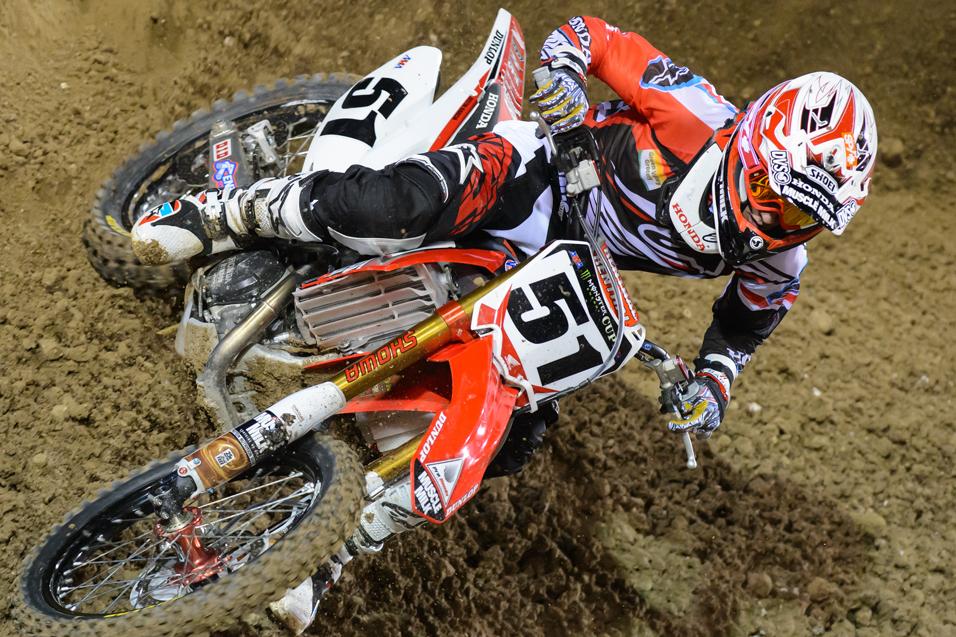 Are we ready to add another name to the list of contenders for race wins in Monster Energy Supercross next year? Justin Barcia is making the case, based on his big win at the Monster Energy Cup. We talked to the new Muscle Milk Honda Rider about it afterwards.

Racer X: Coming here, did you think you were going to leave with $100k and the win?
Justin Barcia: Well, I was hoping to leave with a million bucks, but that didn’t happen, so I guess $100k’s alright [Laughs].

That seems to be the difference, though. You came here thinking you were going to win, or at least you were going to try. You weren’t here to learn a 450 or to learn to race these guys.
I think I had mixed feelings about the whole race. Obviously, when I get on the gate, I want to win. For us, like I said, we put a lot of laps in on my Corona test track this week and actually two weeks before, so that worked out good for us. The new Honda is a really good bike. I’m not going to BS anyone, that bike’s pretty sweet. I think we’re going to be really competitive this year in supercross. It was fun tonight, I had a good time. The track was really tough, but Dirt Wurx did a really good job on the design. Obviously, it’s Vegas dirt and it gets hard and slick. I always suck at riding hard pack, but every race, I get better and better at it, so that’s always something that makes me happy because I’ve never been too good at it.

Some of your previous experience in Vegas hasn’t been too good.
Yeah, I’ve actually had bad luck in Vegas and, as the years go on, I get a little bit better at riding hard pack. That makes me feel good because when you accomplish something, it’s a pretty cool thing. 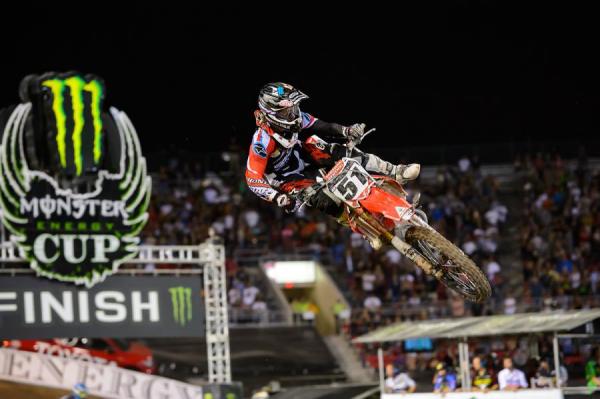 It was a memorable debut for Justin Barcia with Honda Muscle Milk as he captured the overall at the second-annual Monster Energy Cup.
Simon Cudby photo

So was it you behind RV when he went down over there in race two?
I think I was two spots behind him. I didn’t really get to see what happened, but all I know is that he was behind the berm. That’s not ever good.

Just talk about the layout and the craziness of this racer. The joker lane and three mains, what did you think about all that?
I mean, when the gate stuck, that wasn’t good. That was crazy! A whole lot of bikes were like peeing out coolant and stuff.

You were on the side that didn’t drop?
Yeah, yeah. So me, Villopoto, Reed … we were like holy crap! But all in all, I think they did a great job. The track was cool. I guess because of the different seasons here, so when it’s not as hot, they’ve got a little … I wouldn’t say moisture, because they don't get much of that out here in Vegas, but the dirt actually was a little bit tackier than usual. That’s good. The joker lane … [Laughs]. It’s a joker lane. Nothing really to say about it. It’s kind of a joke, but it’s cool that they did something different for us. I think if they’re trying to give away a million bucks, they shouldn’t give it to us easily, so it’s pretty cool.

Did you see the other guys taking off?
No, not until they got out here. I was like, ‘Woah, this is kind of weird. I guess they wanted to give us a late jump like hare scramble or something.’

In the final race, did you kind of know where you were at and what your situation was, or were you just racing? Because it seemed like you were trying to win that race even though you didn't have to.
Oh, I was definitely trying to win the thing. I talked to Eric Kehoe before and he said I had to finish near Dungey or beat him. That’s what I was going for. I think our bike setup was really good. I made a few changes there and this track’s really high speed—REALLY high speed, kind of scary high speed on a 450. But I got used to it and it was fun. 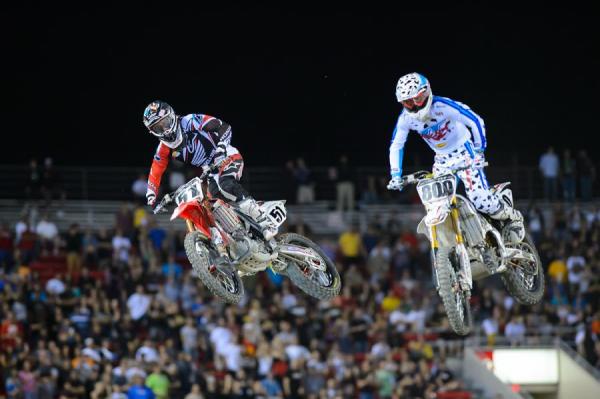 Mike Alessi (right) challanged Barcia in the second main, but would fall short in the end.
Simon Cudby photo

Was there anything spoken between you and Tomac at all as far as if he had gotten in between you guys and Dungey was ahead?
No, I wish. Hey man, can you let me get that $100 grand? Oh yeah, no problem, dude!

No, as far as like Honda?
No, no. No team tactics.

Well you’re not teammates anymore.
Yeah, not teammates anymore, so that’s a little different, but we are on Hondas. But no team tactics or anything like that. Just racing a race. Obviously, I want to win, but it was bigger to come out of here safe and get more experience on the bike in a race, which is cool.

They call it a hybrid track, but I think this year it went hybrid toward the supercross side a lot.
Yeah, well, I think that they should build it like this more often without the joker lane because I think this was like, for this kind of dirt that they work with here, it was good. It was really good.

Where would you say you’re at right now? Did we even see close to what you think you’ll have when you get more time on this bike? Or is there a lot more to do?
There’s definitely a lot more to do. I feel comfortable on the bike, but I know I have a lot more improvement to make. I haven’t been home to test or to ride my bike at all. I did two weeks of testing before this and that’s it, so I think once I get home, get into my routine, get Stanton down there, start pounding out laps, doing some training, I think we’ll pick up a lot of speed there and just push it on into A1. 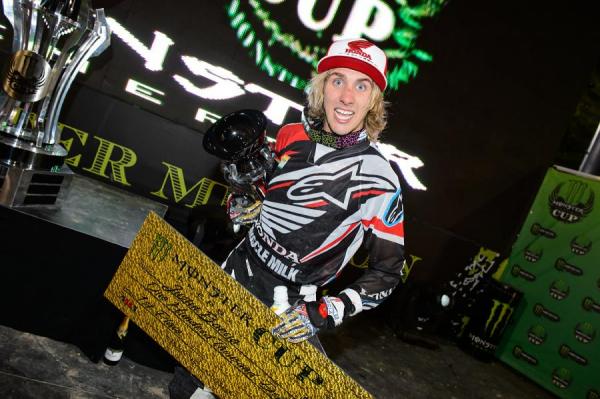 Is Barcia now a considered a contender for an SX title in 2013?
Simon Cudby photo

Can you just very quickly talk about the race between you and Alessi there at one point? Was there cross jumping?
Yeah, that always scares me. It was close. I saw that a lot with last year in outdoors with Dungey and Alessi. I don’t know if Alessi means to do it or not, but it kind of happens and it gets a little sketchy. It was really tough because every time I carried a little more speed down this main straight and we’d get to the corner, I’d try and kind of break slide and block him then somehow he’d get right under me and we’d end up in the same position we were in. It was really tough. He’s a good rider, I just don’t like cross jumping, but it is what it is. You have to dodge it sometimes. We did get close once, but I think it’s how the jump was and how we came together. It just is what it is.

The joker lane thing. You did it late in the race. Did you even plan it? Did you have an idea of when to do it? What made you go when you did?
I felt like in the second race, I went a little too soon, so me and Eric talked about it and we said lets go toward the end more and that’s what we did. It is what it is. I don’t know if I would’ve went a little sooner if it’d been better for me. I’m not sure. At least we got the overall, so that’s cool. Can’t complain. I’m pumped.

What’s bigger? Winning the thing and winning all the money, or just knowing okay, Dungey, I was there with him, Reed, I was there with him, speed-wise? I mean that’s pretty big too.
Even at the des Nations, I knew I had the speed to run with Dungey even though we don’t ride tracks like that, so that made me feel kind of good to know that I knew I had the speed to run with him from there. Then coming here, I was like, ‘I know I’ll have the speed for sure. It’s just putting it all together.’ Even though they say it’s the rookie 450 season for me, I feel like I need to be up there, I need to be battling. Honda hired me to do a job and I want to be up there for them and kill it this year.