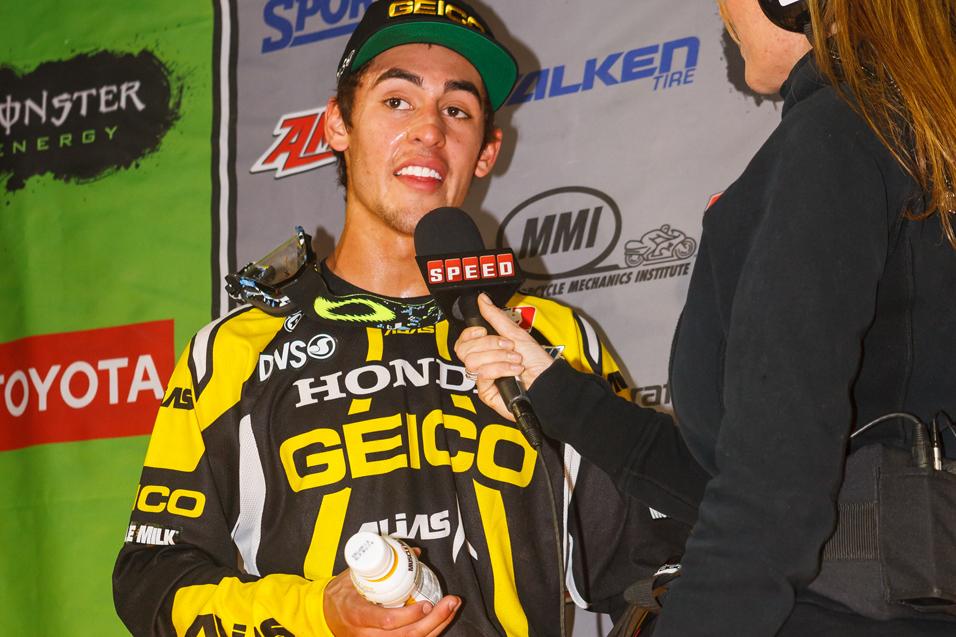 Racer X: You won again. What can we talk about?
Justin Barcia
: We can start off with the heat race. Rode real well, got a holeshot, lost the front end. Boom! Track was real slick, but a lot of guys crashed and I came back to second. Main event, holeshot, had a pretty good lead, I think five to six seconds. But the lappers were intense, and the track was tough this weekend. It was really technical. When I came off from the main event, I was like, “Wow that was pretty intense stuff.”

What was the track like?
It was slick. My track at home is the same texture, when you put water on it, it’s pretty tacky, but when it dries out, it’s slick. When I was watching from the stands I thought the track looked sick. But when I got out there, it was deceiving. For the first time in my career, I actually switched a tire. I always use the same tire, no matter the dirt. But tonight, I actually tried a different tire. And I got two holeshots and a win. I’m starting to maybe figure some things out in my career now [Laughs]. 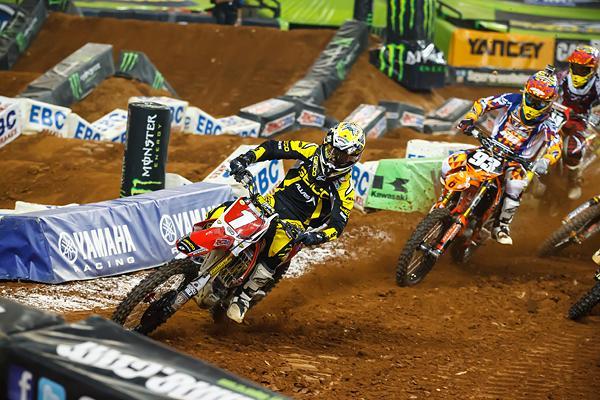 "We can start off with the heat race. Rode real well, got a holeshot, lost the front end. Boom!" - Justin Barcia
Photo: Simon Cudby

Racer X: First of all, people were buzzing after practice. After a few bad races it seemed like in practice you were feeling on. How did you feel during the day?
James Stewart: I rode good throughout the day. The last practice I kind of got caught up, but I was okay. It was really good. And then in the heat race I was just starting to feel the bike out. I got a good start and took off. In the main event I was just jacked. I was in the back of the pack. I was coming up and ended up getting third. I was starting to actually close on those guys and ended up having to roll that triple over there and I lost a few seconds right there. It was over.

Do you have any idea if they saw the light or anything? Do you know anything about that?
I’m not going to say what they saw or not, but I felt like I saw it long enough. It doesn’t matter what happened. It was on for me and that was my race right there.

Is there something with the starts? Are you just getting a bad starts or is there an actual problem you need to work on?
I don’t know. I think that time I just got a bad start. I can’t really remember; there was so much going on. Once I got over it and knew I had a bad start I started focusing on trying to get into the first corner. There was a little gap on the inside and I was like, “All right, cool. I’ll come out maybe 5th, 6th.” I got plowed on the inside and I went really far back. It was a wrap from there.

A lot of people are thinking because you guys did a lot of testing in Florida that when you get to these East Coast tracks you might be better off. Do you think there’s anything to that?
I just think we’ve been working on a lot of things, even just tire setup. It’s the first year for me with Pirelli. So, there were a lot of things. For sure, I’m a lot more comfortable on the East Coast dirt. I think I had a good shot. The track was still really slippery out there. We did a lot of big changes this week and they seemed like they were better but we’ll have to continue going back and working on them. 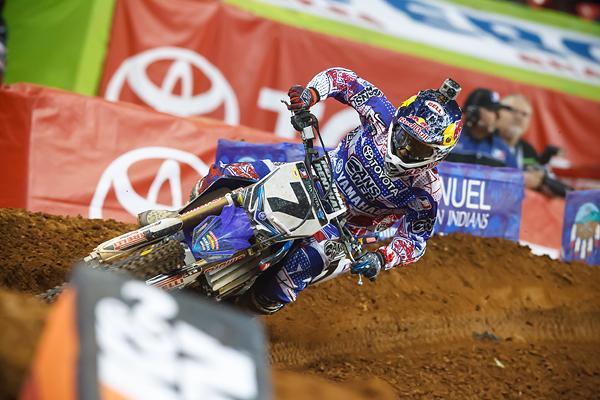 "I’m not going to say what they saw or not, but I felt like I saw it long enough. It doesn’t matter what happened. It was on for me and that was my race right there." - James Stewart
Photo: Simon Cudby

I hate to ask it this way, but what happened there? Did you stall?
Yeah. I came up short on that rhythm section and almost endoed my brains out. And then the bike stalled and I just couldn’t get it started for the next whole lap. I just tried, and tried, and tried and it put me a lap down. It sucked because I jumped right back up and caught [Justin] Brayton and those guys but I can’t get in the race.

And those are the same guys you were with when you stalled.
Exactly. I really think I could have maybe been a 5th place guy tonight. It is what it is. I don’t know.

But in practice you can stall or whatever?
It’s all good for practice, but when we’re racing… 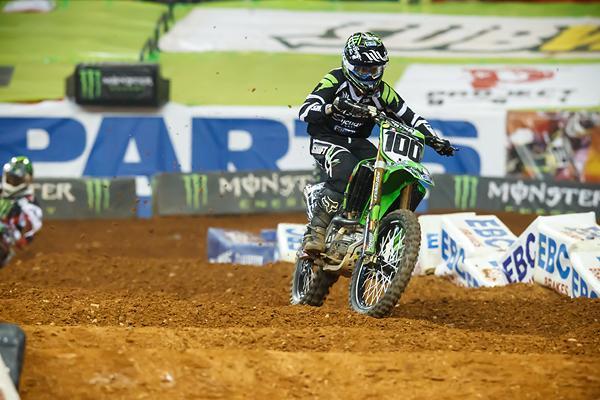 "Yeah. I came up short on that rhythm section and almost endoed my brains out. And then the bike stalled and I just couldn’t get it started for the next whole lap." - Josh Hansen
Photo: Simon Cudby

I’m hurting. It’s been a rough two weeks for sure. I’m really fortunate that I can even race and let alone get a top five or soldier on to a decent finish. But it’s been a frustrating day and a couple weeks, like I said, just not being able to ride like I know I can. The pain has been pretty bad. But I think I made a ton of progress this past week into this week in Atlanta, with injuries. Haven’t been able to ride a motorcycle for two weeks or train at all. It’s time to get back on the bike this week and try to at least ride a day and be a little better in St. Louis. 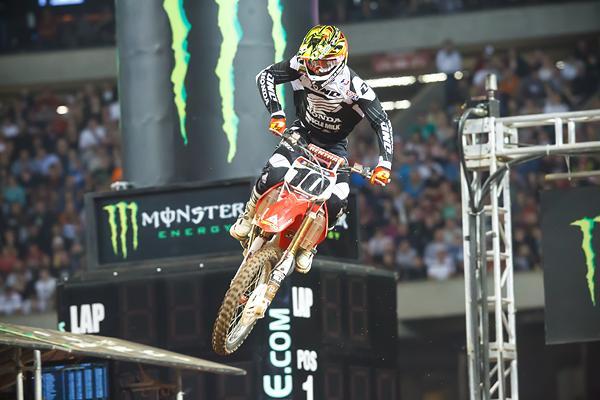 Racer X: Were you a little less nervous this time, compared to last week?
Justin Bogle: I was definitely less nervous. I still rode tight, but making progress. I qualified in practice, I think, third and then won a heat, then got my first podium. So, good night I’d say.

That’s progress. But still a little tight?
Yeah, but I’m not complaining. I’m happy with that. Bam-bam got the win. I got up there in third, so keeping it in the family up on the podium so that’s good.

Now, do you feel like you have a lot more compared to when you ride during the week to when you ride here? We’re not seeing the during the week yet?
No, not fully, but hopefully it will come out soon. It’s not like I’m saying that I’ve got 15 seconds a lap on it, but I feel once I get a little more comfortable and calmed down a little bit it will be a little better. But like I said, I’m not complaining. I had a good night. 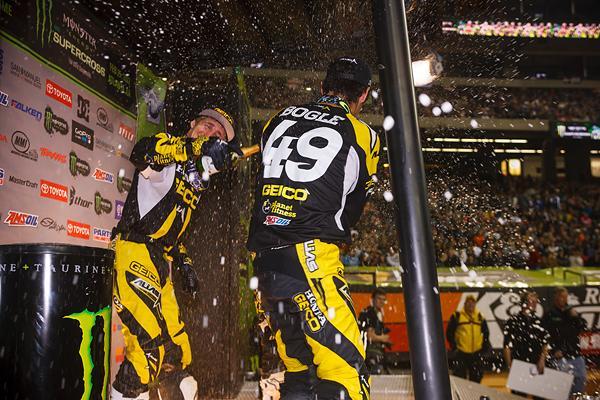 "Yeah, but I’m not complaining. I’m happy with that. Bam-bam got the win. I got up there in third, so keeping it in the family up on the podium so that’s good." - Justin Bogle
Photo: Simon Cudby