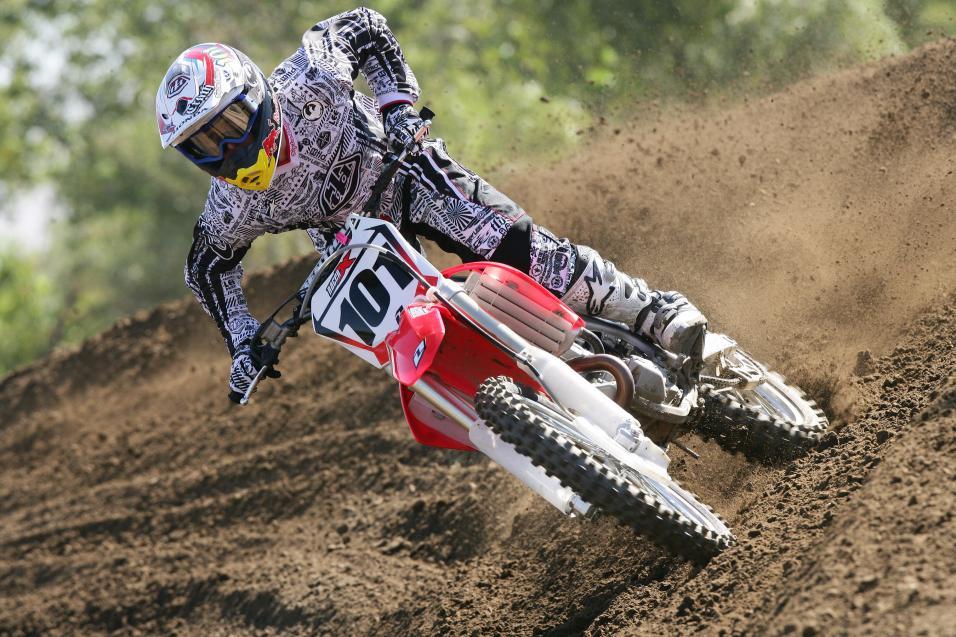 What is your most favorite motorcycle that you have ever had the pleasure of riding?

Mine is a 1995 CR125. I purchased it from a meticulous over the hill rider at the tail end of 1995. The OTH rider was very proud of his machine and sent the motor and suspension to Pro Circuit to have a little extra magic put into it. It also had a PC pipe and silencer and all the cool stuff to make it look like one of the factory Honda’s of its day. It never looked the same after I got my hands on it however. This poor machine went through numerous moto's that year in sand, mud, clay and all the terrain that the northwest has to offer. I had my biggest progression in skill while riding this machine.

I often wonder if it isn't the bike or a combination of things like time period, age, riding buddies, skill level, etc. that really made the bike what it was. That was the fastest and best handling 125 I ever got to ride.

You may have answered questions like this before but the topic seems to be worthwhile and sure does start a good bench racing session.

Anyway, thanks for the constant new material on your site. I often find myself looking for a good reason to slack off while writing papers or doing logarithms. RacerXonline sure does provide a good reason for that.

Good question. We all have that one bike that sticks out in our minds, don’t we? For me it was my 2000 Suzuki 125. It was pretty much the same as my 1999 bike but with a few minor improvements. The motor was incredible and had the lightest, quickest-revving characteristic of any 125 I had ever ridden. The suspension was dialed. The bike itself just fit me like a glove. I think that is one of the things that make a bike fun to ride or not. How comfortable are you just sitting in the saddle? I loved that bike. I won two supercross rounds with that team and finished behind Carmichael at Steel City, which is pretty much like a win in my book. The following year they made huge changes to the bike and, as far as I’m concerned, it was never as good. I wish I could go for one more spin on my race bike from that year. That thing was a rocket. Thanks to @tblazier for the image.


Since you are an expert on all things motocross, daughters and now medical emergencies I was wondering if you could help me. I am suffering from what I believe to be PTPP (Post-Traumatic Polly Pocket) Syndrome. As I was heading for the bathroom last night I got a Pink Polly imbedded in the sole of my foot. Like you, I am outnumbered three to one and dangers lie everywhere in this joint.  I was wondering if you might have any suggestions as to the best means of extraction/treatment for this condition from which I believe you also suffer?

Any help would be much appreciated!

Few things in this world can compare to the pain of stomping on one of your child’s hard, plastic toys in the hallway between your bed and the toilet at 3:00am. And that comes from a guy who has broken his femur, twice, broken both arms simultaneously and passed multiple kidney stones. Like many motocross racers, I’m a connoisseur of pain. In the same way a wino can elaborate on the characteristics of a specific wine from a certain year and region, I can relay in great detail the severity, intensity and duration of an injury and cite specific examples of other injuries that would compare on the pain scale and give you the most appropriate swear word for the injury. For instance, when I separated my ribs it was a tall 7 on a 10 scale with sharp, burning pain upon inspiration and if I sneezed or laughed within the first three weeks of incurring the injury I wanted to shoot myself in the head. It’s about as comfortable as a colonoscopy and the best verbal expression for that injury is “Son of a Dirty Whore!”

Polly Pockets lie strewn about my house in much the same way you’ve described your Missouri home. Strategically placed like landmines in the carpet, one of these pink, Chinese-made figurines will bring a grown man to his knees, especially just before dawn with a full bladder. If it actually went through your foot you should see a doctor. If not, start wearing slippers and then throw them away if your kids don’t pick them up. That’s what I did.

Bret Michaels? Really? This is the best we can do? Doesn’t Feld produce concerts for a bunch of top singers? That song in opening ceremonies sucks.

I’m so tired of everyone dissing Bret Michaels. Here’s a guy who for years made smash hit songs like “Unskinny Bop” and “Cry Tough.” Those tracks changed the way people thought about music, man. He is a motocross fan and, as far as I can tell, an excellent rider. He came up with a very catchy name in the Rock Hard, Ride Hard award to support a sport that he loves and we crap on him for it. Did you know Ralph Shaheen is, like, best buds with Bret and a bunch of other 1980’s hair bands? I don’t have any idea how but it’s true. So by hating on Bret you are also slapping the voice of our sport right in the face. Come on, everyone, let’s stop the hating and get our ride on! Yeah, okay, I just heard it. Maybe we can get a track from Nate Adams new rap album for opening ceremonies.