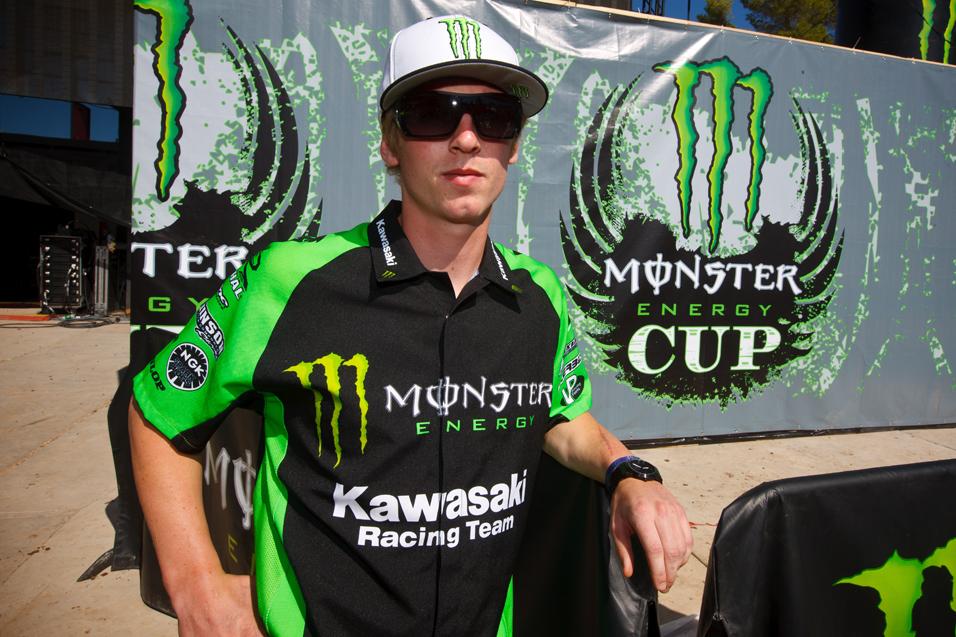 Jason Thomas, BTOSports.com/BBMX, DNQ
The track was ok. The rocks were pretty bad out in the motocross section, but overall it was fun. Not great to race and try to pass on, but fun to ride for sure. I mean, Kevin Windham was right in front of me and wasn’t doing much out there and he’s a much better racer than me. Anyways, I thought the format was cool, the track was fun but not really raceable, but it’s cool that they tried something different.

I didn’t qualify; I’m coming off knee surgery and still getting back into it. Ivan Tedesco had surgery for the same thing three days after me and he’s just now getting back on a bike while I’ve been back riding for a few weeks now. So it’s just not there for me right now. But I’m working on it and will be 100 percent by the time we get to A1. 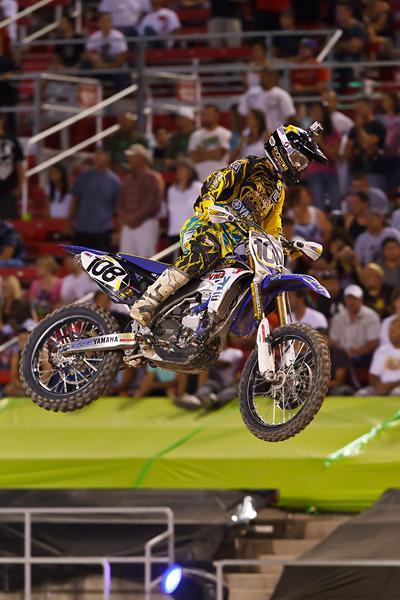 "I’m a glass half-full kind of guy and I thought the track was cool." - Jimmy Albertson
Photo: Simon Cudby

Jimmy Albertson, Valli Yamaha, Eighth Overall  (11-10-8)
I’m a glass half-full kind of guy and I thought the track was cool. It was fun to ride and had some big jumps. As far as my night, I got better each time I went out on the track and ended up eighth overall which I was happy about. I also got a bunch of money, which is always cool!

I cased the big double in the first main event and twisted my ankle, which bothered me the other main events. I also had some good races with Kyle Chisholm, and for me, I had my best lap time on the last lap of the third main event. Sitting on the line and watching the amateur guys was cool, they seemed to be having fun. I thought they were hauling butt out there. All in all the whole event was cool.

Well, the one you were doing all right. You got fifth? No, you fell on the last lap! Never mind. Yep, three bad motos.
No, I didn’t fall. Alessi cleaned me out. So that’s what happened in that one. Then in the second one, I didn’t get a real good start. I got sixth. And then in the last one, I fell in the first turn and then had another little issue in the last lap. I caught a hay bale with my foot and kinda’ stalled my bike and whatever. So none of them were really good. But the track was hard to race on and my starts weren’t great. I got a good start in my heat race. Holeshotted that one. So, it is what it is. I’m sure a lot of people are thinking this, but I think I could’ve done pretty well. I just didn’t get the starts to really give myself a chance.

What’d you think of the track?
I thought it was fun. Well, I thought the jumps were fun. Outside there was a fun jump, but all the dirt outside was just bad. It made Unadilla look loamy. So, I’m assuming they just got the dirt from the field over there. I’m serious; I think they probably did. So that kind of was a bummer. But, l mean, it was fun to ride. But just to race on, I mean, was kind of tough. 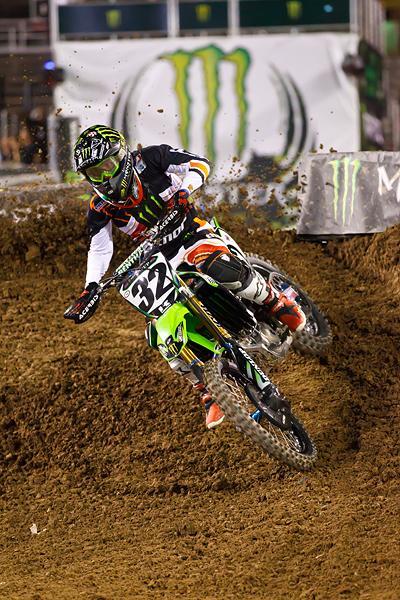 Format. Three ten-lappers. What’d you think? How was the little break in between?
Initially when I heard three ten-lappers, I was like oh cool! But they were actually not really that short with a minute and a half lap time. But they seemed to go by pretty quick. I thought it was cool. Something different. We didn’t have much time in between. So between the second and third one, I didn’t go back to the truck.

As a mechanic, though, sitting there between races would stress me out a little bit. I’d want to check over the bike and all that?
Yeah, they didn’t really have any time to do that. They came back, put gas in it, and changed the rear tire, I think.

So you’re going to Bercy in a couple weeks? Looking forward to that?
I’m excited. I think it’ll be fun. I’ve been over and done one overseas supercross before and it was fun. So, yeah, practice track a couple more weeks, then Bercy. It should be good.

Ben Townley Monster Energy Pro Circuit Kawasaki 15th Overall (2-19-20)
It went awesome. In a nutshell, it was a great event, and the whole idea to come and do this worked out really well. It was unfortunate, the mechanical problem I had, but overall it was great. I had a good heat race, and a great first main event so it was good all around.

What caused your mechanical issue?
I hit a rock. It was really, really, rocky out in the back here, [Townley motions toward the motocross section outside of the stadium] and I landed on a rock. Like the frame would grind out on a rock, the chain guide did. We’re not sure yet, they’ll obviously have to look at it, but something happened to the chain guide that bent, or twisted it. 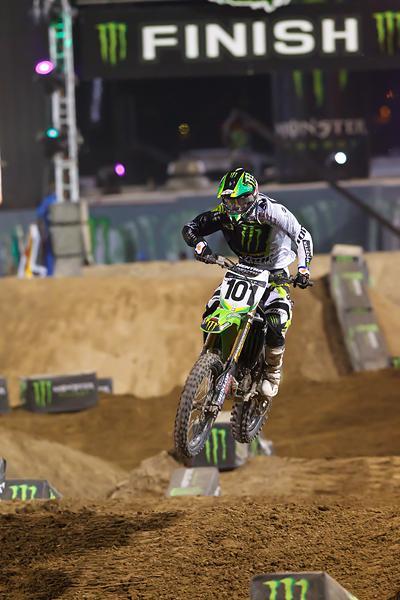 "It went awesome. In a nutshell, it was a great event, and the whole idea to come and do this worked out really well." - Ben Townley
Photo: Simon Cudby

Cole Seely Lucas Oil Troy Lee Honda 17th Overall (21-12-13)
It was kind of a rough night. I had a little bit of an issue in the first moto, and wasn’t able to finish. It kind of set the mood, I guess, for the rest of the night. I felt good though, and my bike felt really good, really dialed. We’ve been working with Showa and Pro Circuit, tuning the suspension, and I was really happy with it. All I can do now is look forward to Anaheim 1, and take what I learned here and bring it there.

What happened in that first race?
I got together with another rider, and his front tire hit my chain guide and bent the mount into the chain, and snapped the chain. It happened in a sketchy place, but at least I didn’t get hurt. I guess that’s pretty much the only thing that happened that was good tonight.