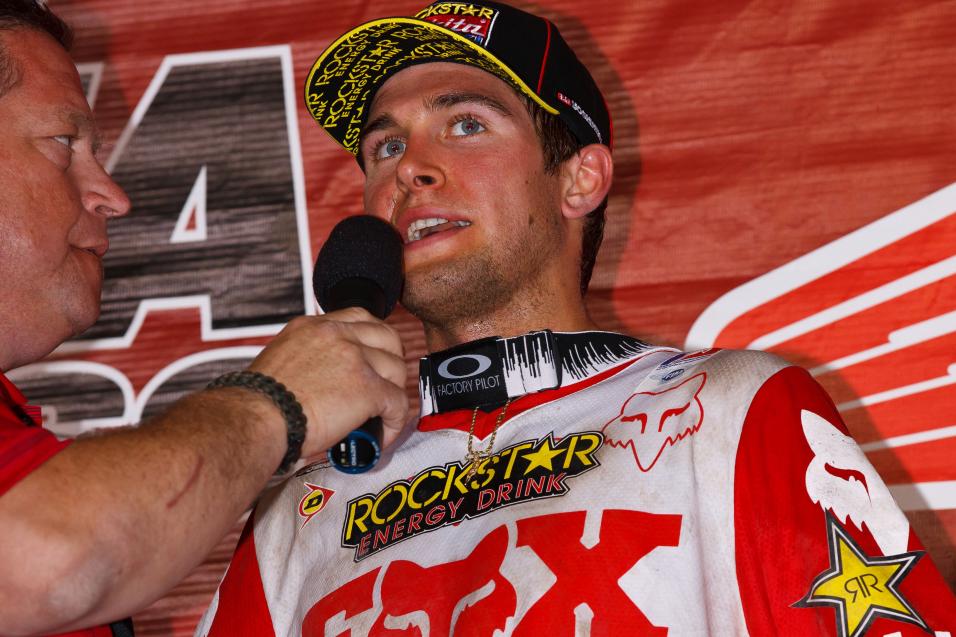 What did the riders think of Daytona? We found a few of them in the pits to get their take:

Justin Brayton: 6th Place, SX Class
It was okay. The track was gnarly, lots of square edges, I don’t know, it was tough. I didn’t have a great day. So for not having a good day, I managed to come through the pack and get sixth. For how I was feeling this week, and from my crash last weekend, this is a good way to leave Daytona. We’re coming up on some tracks I really like so it should be good.

How was this track compared to past Daytonas?
I think it was harder, but I liked it better. It was more supercrossy, with supercross obstacles and big whoops, and I like that. But it made it more demanding, too. But that’s the way Daytona is supposed to be.

PJ Larsen: 5th place, Lites class
I’ve already requested to the team that I can race west next year! I’ve put in a formal written request. No, just kidding. It’s just one of those things that everyone struggles with here, trying to figure out how to set the bike up. We were pretty far off and ended up making a pretty drastic change before the night show. We still struggled a bit with that all night, but really, how can you set a bike up for Daytona? There’s only one race like this all year. The only thing you can really do is bring in an outdoor setup and refine it from there. But it was good, I rode smart and I didn’t crash. It was a really tricky track. That was the goal, just try to keep getting better every week. Of course, I want to win. Who doesn’t?  I think everyone at this level, even if you’re a guy who is just barely making mains right now, you want to win and want to get there. So we’re just trying to get better during the season, every week. 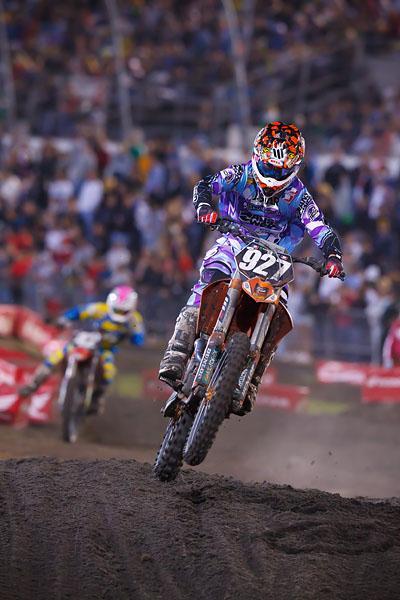 Tye Simmonds: 17th place, SX Class
You’re making mains consistently now. Happy with that?
Yeah, yeah, it’s going better. I’ve been sick for awhle so now I’m feeling better. I usually always get a cold during the winter, so at first I didn’t think anything of it, but leading into San Diego I started coughing up dirty phlem and stuff, I was feeling terrible. I had to spend some time on the couch. Glad to be feeling better now.

You said you’re not happy with tonight’s main. What went wrong?
Terrible start, I think I was second to last into the first turn. I was having a lot of trouble with the track, I’ve never seen anything like that. I never got rolling. But unfortunately this week I have to go to Canada to get my Visa issues sorted out, so I’m not going to have any time to ride.

So Canada can sort out Visa issues?
I hope so! My Visa experies March 8 so I gotta get up there tomorrow. If not I’m getting shipped back to Australia in a few weeks!

Andrew Short: 4th place, SX Class
The race was really good for me. I didn’t have a good gate pick with the heat race, but the first two turns made my night. I was seventh right around turn two, and I came out of it in third. The longer race helped me, too. I don’t know if I would have been able to get Millsaps if I hadn’t had that much time. I got him on lap 16. The middle part of the race I kind of lost my groove, I was just trying too hard and making too many mistakes. Then I settled down and put in some good laps late. That’s three KTMs in the top ten, and four in the main event with Simmonds.

Are you almost relieved that things are going this well, after some tough races early? You’re back in the mix battling the same guys you did last year.
Yeah. Last year I broke my ankle, and I came back trying to work my way back into it, and grabbed two podiums. This year, I feel like I’m trying everything. I’m taking chances and going balls to the wall, and I’m happy to get fourth. Just the depth of the field, and guys like Windham and Brayton where behind me. There are really good riders all around, so you have to work really hard just to get fourth.

Did you pace yourself for the track?
No. I still tried to sprint those first few laps. That’s just too important to our sport, you have to go with the lead guys early. I left it all on the track and went as hard as I could go. 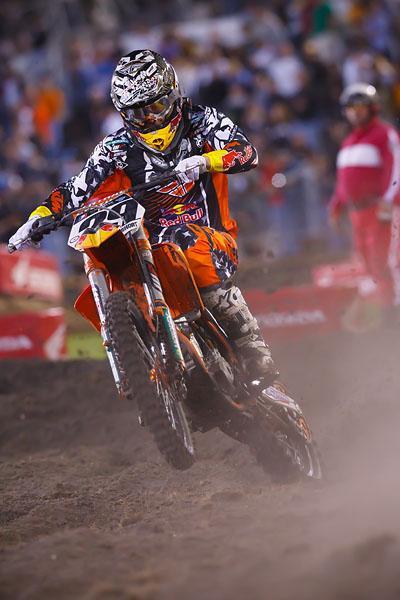 Short is slowly making his way to a spot on the podium.
Photo: Simon Cudby

Ryan Dungey: 3rd place, SX Class
In the heat race we were up front, felt great, not sure what happened. Maybe a rock hit the case, I have no clue, it just dropped oil and started making sounds. I had to go to the LCQ, and I was on the outside gate for the main, so it's a little bit of a disadvantage I'm not going to make excuses, we all get dealt a hand and we have to deal with it. I tried to pull one of those miracle starts from the outside, but I couldn’t quite pull it off.

I haven’t been to Daytona too many times so I don’t have much to compare it to. It was harder than last year. We were only at minute lap times last year, I think it was more physically demanding than last year because of it.