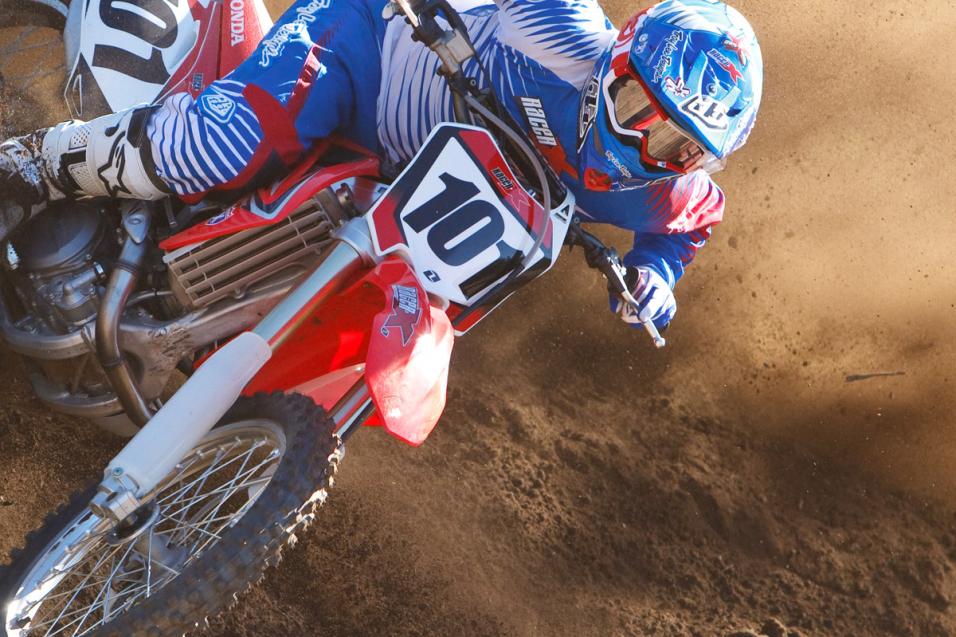 
I assume that there is always an ambulance and medical personnel at the factory test tracks, but what about riders' personal tracks? For instance, did Jake Weimer have to wait for an ambulance to show up at Ryan Villopoto's track after he crashed?

You would be putting the ass in assume if you thought the test tracks had medics on hand. None of them do. In fact, most of the race team personnel don’t even know the address to the test tracks should they need medical assistance. How do I know? Because just over a year ago when Christian Craig turned his spine into a crunchy pretzel at the KTM track, I didn’t know where to tell the fire department to respond to. I literally had to pin it to the track exit off Interstate 15 and wait for them there. And I can tell you that the response time for the relatively remote location of those tracks is longer than it should be. How much fun do you think you would be having if you had to wait twenty minutes for someone to show up when you couldn’t feel your legs or your foot was facing the wrong way? Jake definitely had to wait for an ambulance to make it out and my guess is he waited ten to fifteen minutes for it. Not cool. I’ve instructed all my riding buddies to find a baseball-sized rock and give me one good rap to the head with it should I ever find myself in that position again. There’s nothing like some old-school anesthesia [unconscious by blow to the head with retrograde amnesia] to take the edge off. Maybe instead of the incurring the costs of a medical staff the teams should just stack up a few good clubbing rocks and keep them by the front gate?

It is me, Endo, again. I know this has been discussed before but why don't one of these SX guys man up and kiss one of the Monster/Rockstar/Muscle Milk/Jagermeister/Lucas Oil girls? It is not like NASCAR where the winner may be old enough to be their dad or grandpa. These guys are their age or younger and mostly single. Are the most intimidating doubles on the podium and not on the track? I don't expect a full mating session, but they should at least give them a peck on the cheek and a smack on the rear fender.  I know the married guys like Kevin Windham have retreated to the mirrored shade thing (See Windham, Short, Reed, etc., we all know what that is about). Windham's potential child support would be enough to keep him very much in love with Mrs. K-Dub. I'm sure he does not want to live in a mobile home in the middle of his test track or start going Greyhound to the races. But, really, one of you young guys…kiss one of these girls! Don't be scared! This goes to the heart of our society's problem. The young kids see the big, bad SX winner stand on stage by these hot girls and literally act like they are not even there. Then they flip over to Teen Nick and see some sophomore boy crying because he doesn’t know how to ask another boy to go to the prom with him. Sick! I have banned Nick networks from my home. Anyway, get the word out: there should be a bonus paid to the first one with the guts to do it! That is all for now.

You could have stopped writing after “give them a slap on the rear fender” and I would have printed this letter. That is some classic Archie Bunker stuff right there. While a few would say your comments are completely off-color and politically incorrect, I couldn’t possibly think they were any more awesome. They were perhaps a little crass and likely to instigate a sexual harassment lawsuit, but awesome. Sadly, kids today are unable to have a casual conversation with another person because instead of talking to other kids they text, email, tweet or Facebook them. Howzabout a phone call or just walking up and saying “Hi?” That stuff doesn’t happen anymore. I remember old videos where RJ or the Dogger would grab Ms. Camel Supercross and damn near get to second base with her right there on the podium. I’ll bet $20 that whichever riders land on the podium this weekend doesn’t even make eye contact with the trophy girl or the new Ms. Supercross. Any takers?

P.S. Given your distaste for the Nick Network you might want to stay away from Disneyland. I took my girls there recently and spent half the day trying to explain, “Why those two boys were holding hands.” I haven’t seen guys groping each other like that since I watched my high school state wrestling championships. Gross.

Do MX/SX racers have some sort of degenerative disease that forces them to overuse the word PUMPED? Enough already. Mr. Carmichael's skills, determination and work ethic are worthy of being emulated. His overuse of the P-word in every interview seems to be the one thing every racer has copied. The current #1 for example, likeable enough, seems to be the new pied piper of the P-word. I would sooner gouge my ears with a rusty screwdriver than have to listen to another of his interviews. Plastic, fake, phony, corporate drone are all words I would to describe his persona.

I feel certain that you could use your influence within the industry to stamp out the P-word. You have the platform, vocabulary, and communication skills necessary to make this happen, so DO IT!

Perhaps you could make an instructional tape letting these guys in on the little secret that the fans see right through their interview rhetoric and that keeping it real without stepping over the line is a valuable skill also worthy of emulation (a-la #14), in order to develop a long term fan base that won't shift allegiance when the results eventually begin to slip.

I’ve already fought this battle. It’s like some Pavlovian response where as soon as a microphone comes out the first word that bubbles to the surface for these guys is pumped or super-pumped. I’d like to hook some electrodes up to their nipples as soon as they pull off the track and let one lucky fan from the stands be able to deliver some electricity every time the word “pumped” is dropped. There’s nothing like a little Edison medicine to break old habits. We could turn this whole thing around in a hurry is my guess. It probably won’t happen though so you might want to head to the shed and find a rusty old screwdriver.