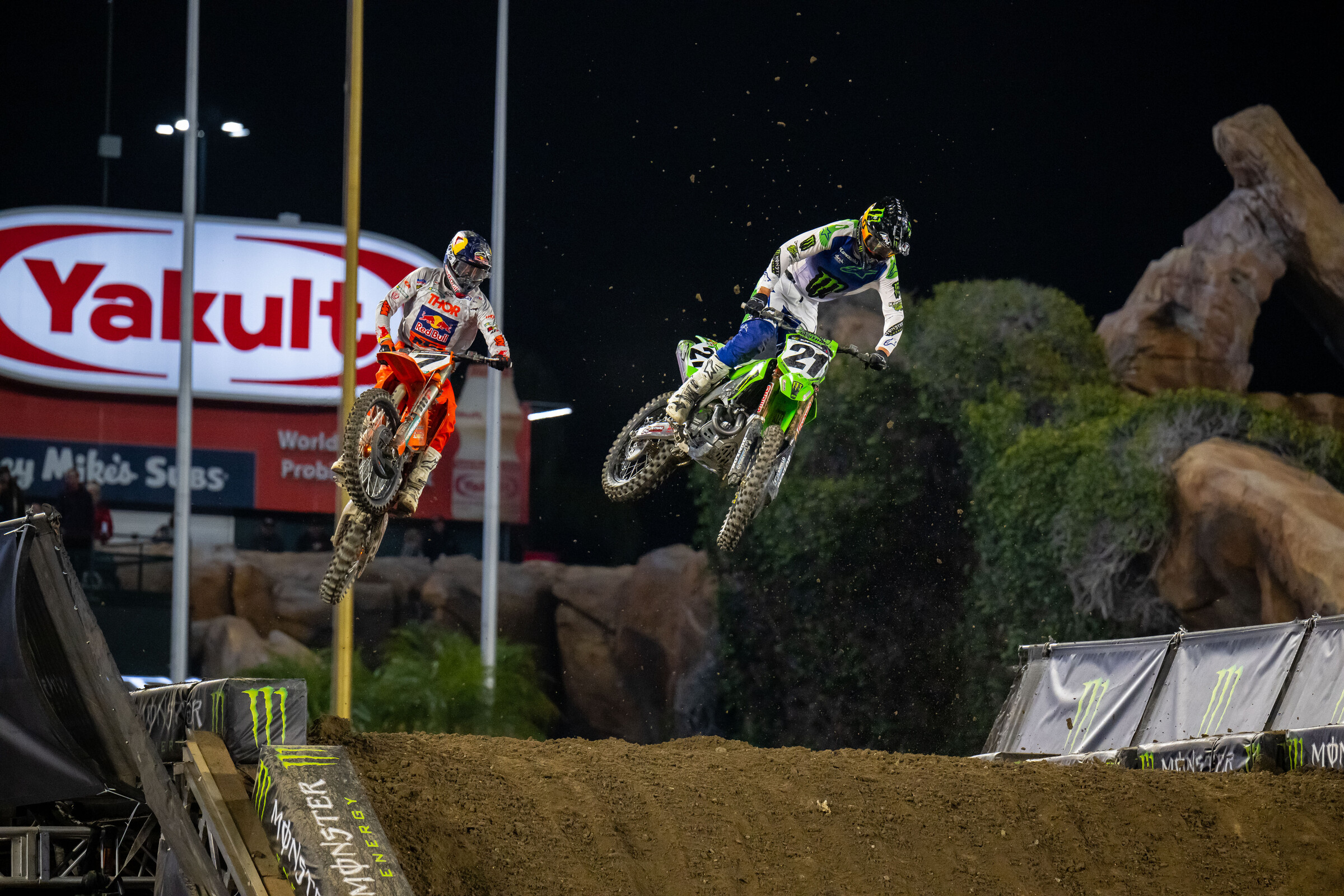 It seemed nearly every rider played a starring role at Anaheim 1, because the race was so dynamic it presented multiple leaders, and plenty of highs and lows. Thus, there’s more to tell than just the podium stories, and better yet, so many riders who finished off the podium have to feel like the best is yet to come. Anaheim hid some great riding by leading so many riders to make mistakes.

Here's a few of those stories.

1. Anderson’s Wild One: No surprise to see Eli Tomac, Cooper Webb and Chase Sexton sharing the podium, but everyone is high on Jason Anderson’s chances to be a contender again this year as well. His Anaheim wasn’t nearly as smooth as those guys, including numerous practice crashes. One of them, in a rhythm lane, was pretty scary. Jason put it all back together for the main event and found himself in that podium mix until another crash knocked him back. He salvaged seventh, which is actually better than his knock-down-induced 10th from a year ago. “The dirt didn’t feel as soft as they said it was,” joked Anderson on Instagram.

2. Craig Takes A Hit:Christian Craig was showing the expected speed early in the day, until a big practice crash took the wind out of his sails. He texted our Steve Matthes that he “only had half a body” after that one. In survival mode for the rest of the event, he netted 13th in his first foray as a full-time 450SX rider.

3. Plessinger the Sprinter: An eighth-place finish doesn’t sound like much, but Aaron Plessinger showed aggression and sprint speed on his Red Bull KTM that we didn’t see last year. He made quality passes on quality riders during the heat race and the main, but a tip over cost him a few spots after he went at it with guys like Anderson and Dylan Ferrandis. Combined with Cooper Webb’s rejuvenation on the podium, and it was the good night that Red Bull KTM needed.

4. AC Stays Cool: All anyone wants is to see Adam Cianciarulo go the distance. Just log laps and rounds to rebuild a foundation. The gnarly track took him down a few times in practice, which was not part of that plan. In the night show, though, he was quiet, which is part of that plan. He told our Steve Matthes: “I was kinda just chilling in 12th for a while behind Barcia, really didn’t want any part of that, I was just kinda riding my laps and working on things, and some guys came back to me. Marvin came back, Barcia crashed, Mookie crashed. So I got ninth. Pretty good, man.”

5. Madd Mains: MaddParts Kawasaki put solid plans together this year, announcing veteran privateers John Short and Freddie Noren to the team early, and then both rode very well to put their Kawasakis in the main event. Freddie won the LCQ and Short won a battle with Alex Ray to grab the last spot. Noren followed with a great main event start, too. They finished 21st and 22nd, but privateer teams like this base their weekend around making the main. Their boys did it.

6. Grant Harlan! Speaking of privateer power, Grant Harlan is the recipient of this year’s “Tevin Tapia” Award for making A1 against odds and against a tough field (T-Tap made the 2015 Anaheim 1 main, all 21 other riders in that main event had some level of high-end support). Incredibly, Harlan made just one main event last year, at Daytona in the 250 class. At Anaheim, he qualified for the 450 main through his heat race, and then finished a respectable 16th! Heck of a start to a 450 career for Harlan, who is riding with help from Rock River Yamaha.

7. Colt Revolves:Colt Nichols had a welcome-to-the-450-class moment when he holeshot the 450 main, which is also his first race, anywhere, in a year. It’s also his first 450SX main ever! That was cool but a few turns later he had been shoved back to eighth! Colt persevered, and while everyone else was crashing and battling, he put together consistent laps and ended up sixth. Yes, he went first to eighth in one lap, but finished sixth in the end. That’s all he can ask for in his debut.

8. Roczen’s Return to Yellow: Not the Anaheim 1 win like Kenny grabbed four times before, including last year, but he was in the battle the whole way. Everyone looked uncomfortable on that track, but Roczen made more mistakes than most, which is odd to see from one of the most precise riders in the sport. Chalk this up to his first run on a new bike and team (he’s stated over and over this Suzuki is nothing like the one he last rode in 2016).

“Well, boys and girls. A1 is a wrap and I can’t even explain how happy I am to come out of there in one piece,” wrote Roczen on social media. “I’m sure everyone was in the same boat but feeling like a fish out of water is probably an understatement! I hope no one watched my first couple of laps in the main as I bounced my head off the bar pad what felt like about 15 times. Either way, I am totally ok to get away with a fifth place for the first round. I pretty much doubled my way around the entire track and i was fine with it!. We are working hard to keep building and we are taking it one race at a time.”

9. Roczen’s Teammates: It was much tougher for Roczen’s teammates who run under the Twisted Tea Suzuki barrier. Kyle Chisholm actually didn’t Chizz! The veteran makes mains almost no matter what, but he missed last year’s Anaheim 1 main due to illness and the same thing happened this time. He missed the cut in the heat and skipped the LCQ. Shane McElrath didn’t look comfortable at all on his new bike and then he suffered a painful crash off the start in the LCQ, ending his chances of qualifying.

10. Hill Brothers: Interesting (and fun) experiment to put both Justin and Josh Hill on Team Tedder. It worked, as they both made the main event, Justin finished 15th and Josh 18th. Justin Hill hasn’t even raced supercross since the 2020 Salt Lake City finale!

11. Malcolm is Close Again: This is the story everyone knows and everyone saw. When Eli Tomac went down in the lead, Malcolm Stewart found himself out front and in position to finally get a 450SX win. He couldn’t close it, first with Chase Sexton getting by, and then later when he hit neutral on a tabletop and went down hard. "I was leading the main for a while, which was amazing,” said Stewart. “I don't think I've done that in my whole entire career. Just having all that pressure and dealing with it, if anything brings confidence to me because I know where I belong. I'm very proud of myself. Unfortunately, we did have a crash with three laps to go. It was a big crash for sure. I'm glad that I'm healthy and walked away from it, so we live to fight another day and I'm more proud of myself because of how my day was going and me turning it around and going like that, and doing what I'm supposed to do just brings more confidence for me.”

Luckily Malcolm was okay and rolled around to net 16th. The crowd was loud all night at Anaheim, but a Malcolm win, oh, they wanted that one as badly as he did.