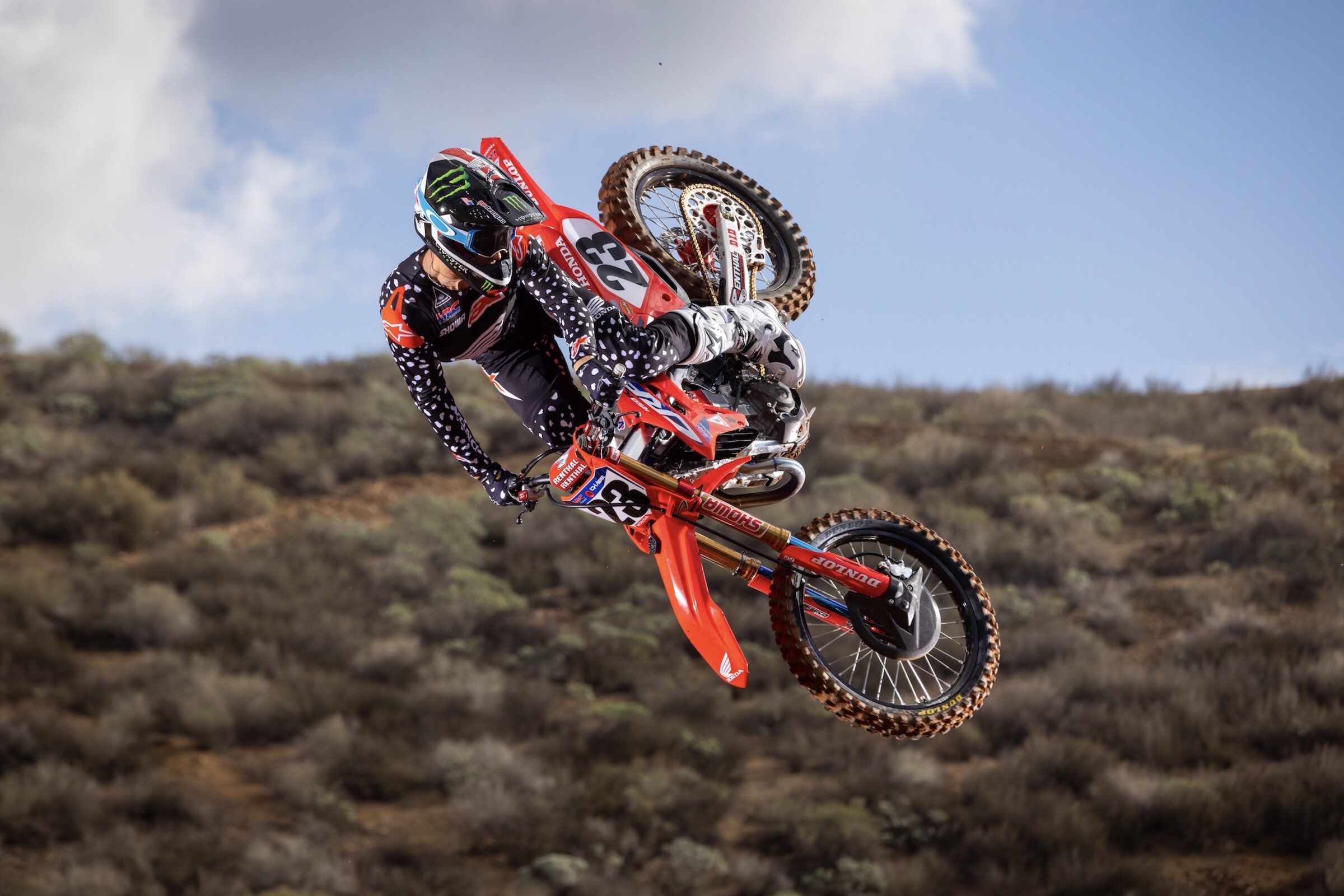 450 Words What Could Go Right?

You’ll hear it all weekend, #deepfield #stacked and all that. We’ll hear how 10 riders can win races. It’s that hype at the Anaheim 1 opener to Monster Energy Supercross that makes everything so exciting.

So, let’s get those juices flowing. He’s a group of big names in the 450 class for ’23, and scenarios on why each could have a mega year.

Eli Tomac: Eli was The Man already in 2022, and he has a new Yamaha YZ450F which is lighter and could work even better in supercross. What if last year’s champion actually gets even better?

Jason Anderson: Anderson’s 2022 season with Monster Energy Kawasaki was superb, but he says he really needed a full year with the bike to truly understand it. Anderson hasn’t changed anything for the new year, unlike other contenders who have new bikes, situations or concerns. Anderson proved last year that sometimes change is good, but in ’23 he might prove less change is even better.

Chase Sexton: Crashes have thwarted Sexton on a 450, but he’s fixing that. Last year’s supercross campaign ended with 2-3-2-4-2 run, then he pushed Tomac to the absolute limit in pro motocross, taking podiums in 22 out of 24 motos. Year three is often the true breakthrough year for 450SX contenders. The timeline is set for Sexton.

Cooper Webb: Webb’s 2022 season was a huge disappointment, not only failing to defend his ’21 Monster Energy Supercross Championship but also failing to win a race. Now he’s gotta climb back. Webb motivated as an underdog is an intriguing thought, but there’s substance, too: he returned to Aldon Baker’s off-season bootcamp after parting with the trainer 18 months ago, and he made major changes to the Red Bull KTM 450 SX-F. Last year’s tracks offered mega whoops, which is not Webb’s strength. If the whoops revert to 2021 levels, it will tilt the odds in his favor. Remember, Webb is only a year removed from being the best supercross rider in the game.

Malcolm Stewart: Remember the worries that Malcolm couldn’t hang with Aldon Baker’s hard core training program? Apparently, that’s not a problem, and his ’22 season was his best ever with third in points. There’s no reason to believe he can’t finally get that first 450SX win, and once he believes that the sky is the limit.

Dylan Ferrandis: Ferrandis has been excited since day 1 on the new YZ450F, and his team said he’s going to be a much better Dylan Ferrandis this time. Like Sexton, Ferrandis is about to hit year three in 450SX, which is usually when things go to another level.

Adam Cianciarulo: Everyone remembers that Adam has never forgotten how to go fast on a motorcycle.

Aaron Plessinger: If Webb and the team’s changes to this bike work, AP could be back to the potential that had the industry buzzing not too long ago.

Marvin Musquin: How can we even resist the “aging like a fine French wine” line about Marv? He one of just five riders to win a race in 2022. And 2021! Why can’t it happen again?

Justin Barcia: Bam Bam’s Bam Baming gets the headlines, which leads you to think his Wild Child ways lead to crashes and inconsistency. Actually, Barcia is one of the most consistent finishers in the game, and always hovering around the podium. That alone makes him a contender every year.

Christian Craig: Craig heads to his first full-time 450SX season, but with more experience than the average rookie after years of 450 motocross campaigns. Also, his whoop speed is outrageous, and he’s working with the Baker’s Factory gang. Isn’t that exciting?

Colt Nichols: Colt’s a rookie to the 450 and missed a year of racing, but Honda is buzzing about his testing skills. He’s generally an underrated talent, proving capable of winning against anyone in 250SX. Why be surprised if he does it on a 450?

Ken Roczen: Is there any story more intriguing than Ken Roczen, following his worst supercross season ever, bringing Suzuki back from the dead with a win? Is there anyone more capable of pulling off such a feat than Roczen?