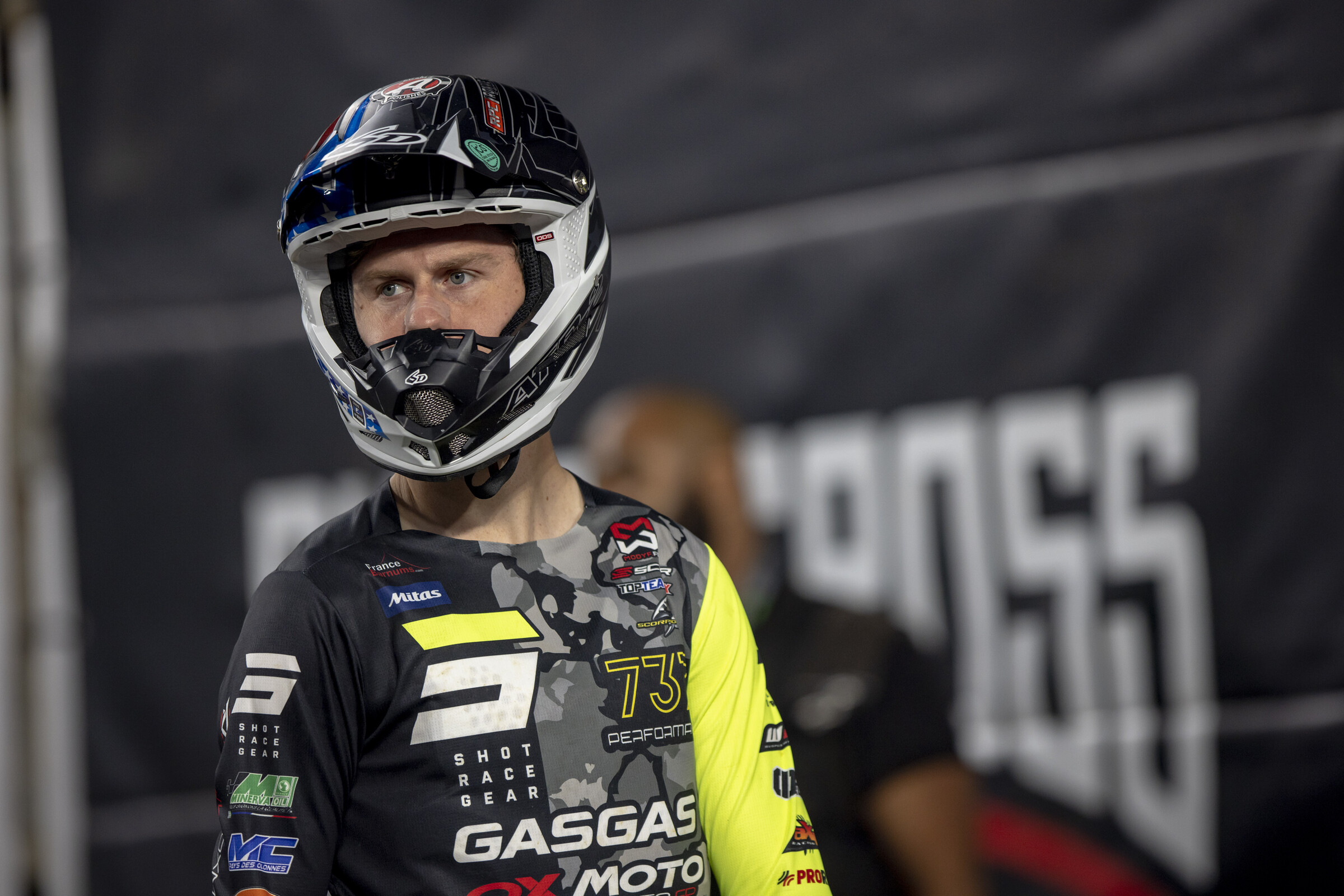 Justin Starling has been racing 450’s in Monster Energy AMA Supercross for the last two seasons but dropped down to the 250 class for the Paris Supercross. Like many of the riders, he struggled with bike setup, as most were expecting an easier track design than what they were met with. Steve Matthes sat down with Starling after night two to talk all things Paris like bike setup, track design, racing in the 250 class again, and romance.

Yeah, congrats on that!
Yeah, thank you. We kept walking back, it was more comfortable there. It’s always pretty crowded here and I don’t want to just sit in a chair the whole time so yeah, we just kept going back to the hotel.

Starling proposed to his girlfriend Nicole while in France.

That’s where you were. Are they going to give you the side plate off of your bike, we’re trying to get that right? As a souvenir.
Yeah, I’m trying to take something back because I ran the #12 this weekend, which is my real number, not my AMA number. So, I am trying to take either a front or a side plate just because it would be a cool souvenir. It was my first time here too.

Didn’t go the way you wanted it to, it got better, you got eighth in that last one I think, which was your best of the night. What was the deal?
I haven’t rode 250’s since 2020, I wanted to get more time on it before coming but that didn’t end up happening. The bike was stock starting the weekend and the suspension was pretty soft, but we made some tweaks and it got a little bit better.

Did you bring suspension?
No I didn’t.

You came to Paris and didn’t bring suspension. And then the track was one of the gnarlier Paris events we’ve had.
Well if you looked at last year, I was thinking I was going to be all right because the whoops weren’t so big, like it’d be okay.

Yeah because [Tony] Cairoli and [Romain] Febvre were here so they made a tame track.
Yeah, misjudged on that one, the whoops were probably bigger than I’ve ever seen. But I trust Valentin [Teillet], this is his team, I have raced with him a lot on judgment, he even said all of the guys here have been complaining about their suspension being too soft. They race the French stuff and it’s harder packed tracks so they want it a little softer. So, a little bit there but they made a few changes for the racing tonight and the bike was way better. My starts were awful all weekend, but I think I got a 12-11, should have got a tenth the last moto last night but I crashed with two laps to go, got 14th. And then 11-8-8 tonight so, better. The 250 class is suicidal. People dive bomb you all the time, like that pass is going to make a thousand-dollar difference and I am just, "Listen I want to go home," you know? But all in all, great weekend. I got engaged on Friday night, so that was icing on the cake.

Were you sweating if she was going to say yes?
No. I was pretty confident in it, but it all worked out perfectly. The racing was just like the icing on the cake but getting engaged was the highlight of the weekend.

Yeah, that was pretty cool, at the Eiffel Tower too. Never seen that before.
Right? Like no one has ever done that but you know she has always wanted to come to Paris, and I have never been here either so it kind of worked out perfectly.

You say you have never been here? I was surprised you haven’t done one of these in the 250 class before.
So it was always during Stuttgart [German supercross], always the same weekend, and this year it was opposite weekends, but my priority was always towards the states this year. And then I can’t race Dortmund because of supercross in the states so I didn’t want to race just one race. So the year I could have done both I only stuck to Paris. And yeah, my priority was getting engaged and coming to Paris where I have never been.

Memories, never mind the results, you got better memories than that, thanks man.
A lot of memories, very big ones. Thank you.