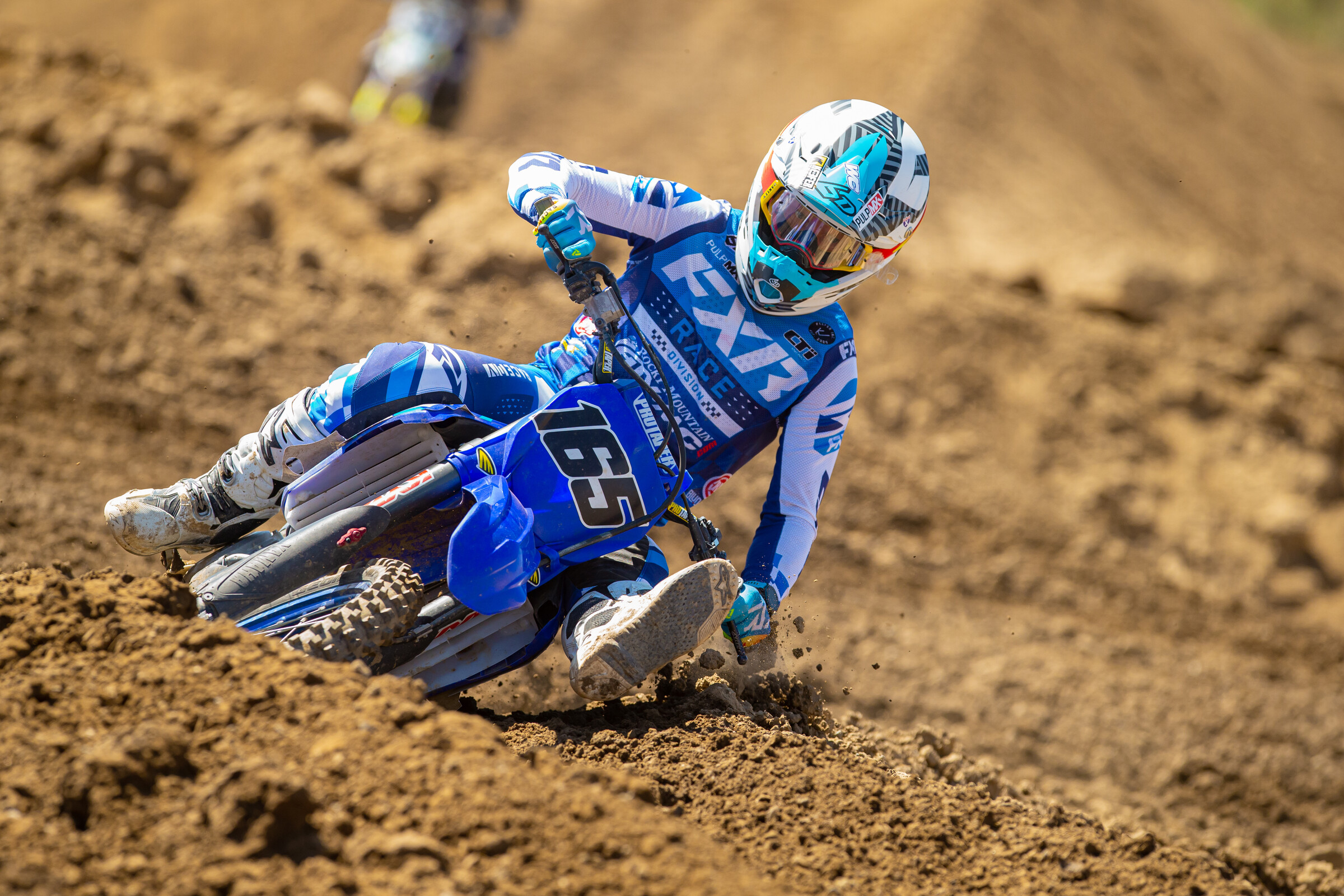 I DO NOT want to be the old guy talking about when I used to walk uphill both ways, or how we had it harder back in my day, but I do want to talk about how different it was to get sponsors back when I was a teenager in the ‘90s compared to now. I mean let’s face it, if you’re actually still “reading” articles you’re over the age of 30. You see, I have a 16-year-old son and I try to teach him the value of a dollar and how his life, isn't REAL LIFE. This is a tough job! He walks out in the shop to find dozens of bikes, parts, tires, gear, oil, etc., and he used to think it all just grew on trees and just magically showed up from the bike fairy or something. My wife and I work daily on keeping him grounded and making him understand where he comes from. He is lucky to reap the benefits of a father who works in the industry, but on a recent trip through our home attic, I came across some things that showed him that the dirt bike fairy just doesn’t magically show up in the garage to drop off dirt bikes. I also am not blind to the fact that just because I get older doesn't mean my way is the RIGHT way. Our sport has evolved, the way our children grow up has evolved, and our world has evolved, but I do think this nostalgia that was up in my attic spoke, and those words still hold true to this day.

What was up in that attic was a majestic binder that had handwritten resumes, a company hit list, and even a note to grandma. I was either asking or thanking all of them for sponsorship. You see, when I was a young moto fiend teenager, I used to go through all of my motocross magazines and find as many addresses as I could from companies to see if they could offer any support for my upcoming racing season. I would first write a rough draft and then hand type them on the family typewriter (you kids, if you’re still here, don’t know anything about that). After typing a letter and some results, I would lick more than few envelopes and send them off. The next few weeks, maybe months, were all about waiting by the mailbox! I knew what time the mailman came and when he was late, I would freak out! I remember walking to the mailbox from the front door of the house envisioning a big/thick manilla envelope from Fox Racing that said, 'Congrats, you have been chosen to be a Fox Racing support rider,' but that letter never came. I didn’t even get a letter that said, 'Beat it, kid!'

However, that didn’t deter me! Hell, I rode my Diamondback BMX bike to the local Dairy Queen and handed Bob, the owner of this fine high desert establishment, a handwritten resume. He looked at me like I was a dumb kid and said, 'Not at this time, I'm sorry.' But I was determined to somehow continue riding dirt bikes at some level and I knew two things: I wasn’t rich, but I could offer a company something to help make them money. So I didn’t give up! I came back in the following month with all of my gear on and asked the clerk behind the counter if Bob was around, which he was. Once Bob came out, I re-introduced myself and asked him if this was a better time to ask for support. I also came armed with all the local races that I was planning on doing the next couple months and told him I could get some riders in here after the race to eat some ice cream. He didn’t look at me like he did the first time he met me. Something clicked, I think. He told me if I came into the shop once a week with my gear on and held a sign outside his store that said, 'After I ride, my favorite treat is an Oreo Blizard,' he would help me! I knew I wasn’t going to be a supercross champion or even an off-road champion, but I was willing to hold that damn sign on the corner to help promote that tasty Oreo Blizzard as well as get me to the races without my parents' help. So I did! Good Ol’ Bob told me he would pay for my races for a year, so I kept the end of my bargain and made it to the corner once a week and held a sign for drivers to stop in for those tasty treats! (I may have indulged in a few of them as well.)

Now, I am not saying ALL current privateers are basing their decision to race on if someone comes to them, but I do see some of the current crop of privateers crying about, 'I should have this,' or, 'I should have that.' But what are they doing about it? They're asking for bikes or product but are the planning on giving something back to their dealership or companies that help them? Are they expecting their results alone on the track to repay said companies or dealership? Well, I am here to say, those days are gone my friend. Gone are the days of, 'I can get into the main event and promote your business,' Or, 'I am beating [insert name here] every week so I should have his ride!' That doesn't sell bikes or product anymore, sorry! You actually have to go that extra mile for your sponsors or else they WILL NOT see a return on investment (ROI) these days. Look at riders like Logan Karnow, Kevin Moranz, and even AJ Catanzaro. These riders are thinking outside the box and bringing outside sponsors, and those sponsors are actually seeing a return on their investment. These riders are talkative, outgoing, can sell themselves, have a social media following, respond to fans, and yeah, still can ride a motorcycle at a high level. I call these types of riders unicorns, because they are so damn rare! Yes, I know unicorns don’t actually exist, so don’t freak out on me in the comment section.

What about before the professional scene? I am also neck deep into the amateur racing world and see a ton of fast kids, yet only a select few will get full support from the manufacturers. Dealerships are still the backbone of our sport, and it takes not only a fast kid with results, but a kid with personality and a willingness to help promote the dealership in a unique way (like I did with good ol’ Bob and DQ). It also takes a family that is NOT up the sponsors asses at every race and can understand that it is NOT ALL ABOUT THEIR CHILD because these companies that are helping more than one kid. Social media has opened up a whole new world for sponsorships and it takes a young kid with an open mind and a good work ethic to make it in our sport. Sure, if you’re the kid who is killing it every weekend at every amateur national, you might not have to think outside the box as much, but what about the rest of the kids between second and fifth? Yeah, there are A LOT OF YOU! I feel like those kids who are just on the outside of winning are the most profitable to a company, but only if he or she has an open mind and is willing to work/help promote their sponsors. When is the last time you met an amateur kid who is winning every big amateur race and knew exactly what was on his or her race bike and what it did? YOU DON’T! At least I haven’t met one yet. So why don’t you second-to-fifth-place kids not only work on your riding, but learn about what the parts on your bike do? Ask your parents questions on why we run this or that. Is it because we get the best deal on it? Or is it because it actually works? Learn about your bike that you’re riding! Learn about the parts that go on it! Learn about your suspension instead of just complaining about it! Be better off the bike too, and that becomes another added element to your resum that others will be able to see and want to be a part of!

Here is another side that maybe some people don’t think about as well! If I was a company that had a product to promote, that was looking for young amateur kids, I would want them to know what I made and how it made the bike better, so they can tell others. Not all of the blame is on the rider/kid. I feel like some of the blame is on the companies. Some companies are choosing the wrong riders/racers to represent them, yes. But before giving out product to some riders, why not educate them on what you offer and give them some sort of exam on how the damn product works? If the family or young amateur wants the help, make them somewhat earn it before they get it. Create some sort of questionnaire or maybe a Zoom call to go over the product and how the rider may answer questions when/if they are asked about it. This is no different than in the real world where you have to parent your child in order to create an adult that knows the right way and wrong way to life. I know these companies are busy, but I think they can spend a little extra time on who they give product to.

There is nothing like the sport of motocross. There is a ton of talent out there. There are also a lot of great kids and parents in our sport, but sometimes it takes more than winning to make it not only easier on your pocket book, but provide a larger pocket book for the companies that are helping you.

So just because we find something that is 25 years old doesn’t mean it’s necessarily dated/extinct material. Sure, the paper it’s written on is old, but point behind that paper still remains the same to this day. You have to work hard to get what you want. The work may have a different look, but you've still got to put the work in order to get what you want. It's not enough to just ask for help, you have to explain why you're willing to earn it.

If you have any stories you would like to share or thoughts on this matter, please feel free to email me at kris@keeferinctesting.com.