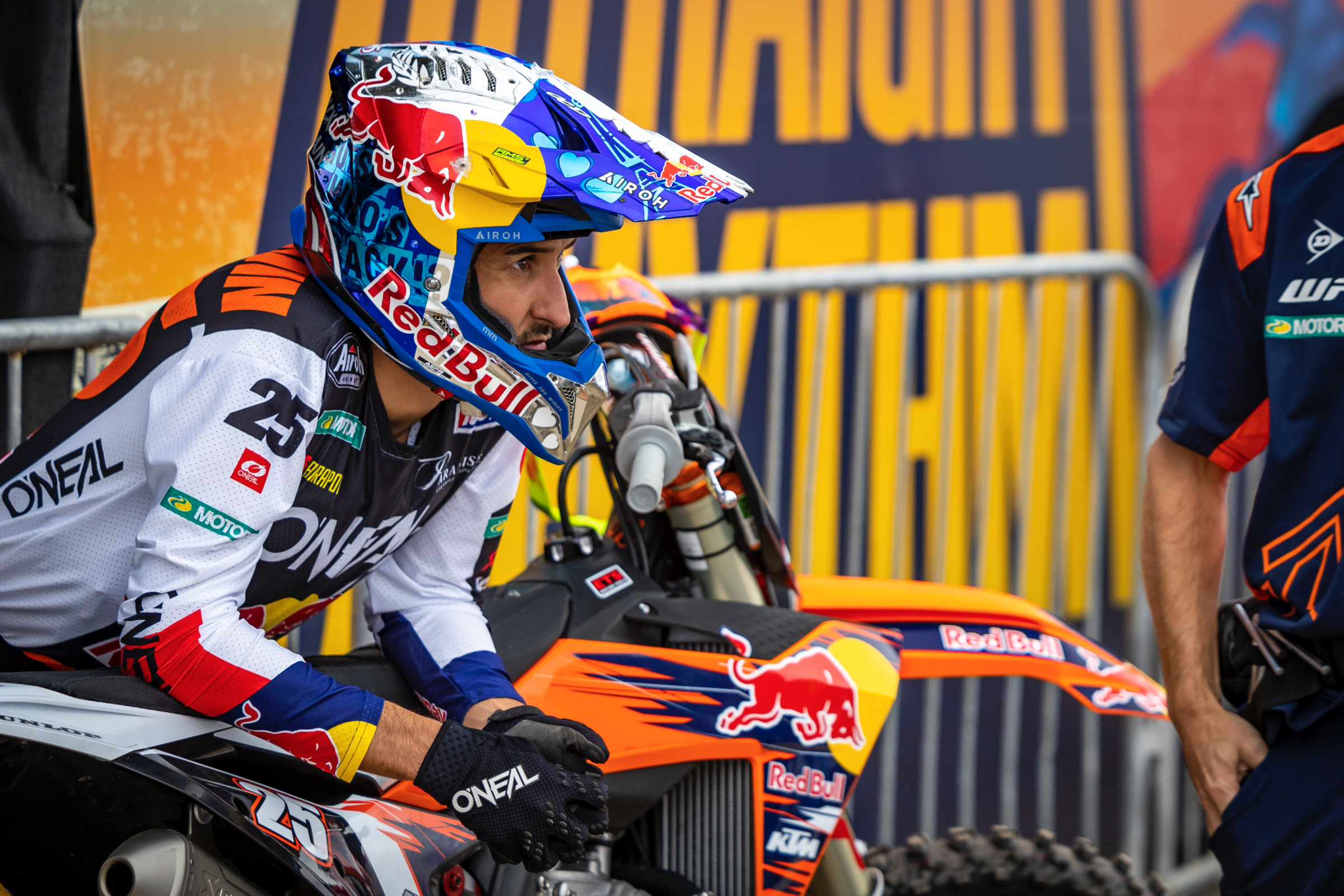 Saturday in Huntington Beach, California, some of the top supercross riders gathered at the beach on two-strokes and raced almost 2,000 feet of straight supercross-style rhythm sections to crown a new Red Bull Straight Rhythm Champion. After a two-year hiatus of the event, which was last run in 2019 in Pomona, California, it was a wild site to see supercross on the beach. The event ultimately was won by Red Bull KTM’s Marvin Musquin, which not only marked his fourt- ever Red Bull Straight Rhythm victory, he also was perfect again. While RBSR sets riders up in best-of-three matchups, Marvin has never even lost a single run to anyone, ever. That includes taking two-straight from Ken Roczen in the finals this year.

Now a four-time winner here and still undefeated, we caught up with Musquin after the dust settled to hear about a wild day of racing where even a little bit of rain couldn’t dampen the fun.

Racer X: Marvin Musquin, Red Bull Straight Rhythm winner again! Now a four-time winner. How does it feel?
Marvin Musquin: It feels great to be honest! Racing a two-stroke was a big challenge and I had to learn the bike. Everybody was quick today. I mean, Josh Hansen, Justin Barcia, Cooper Webb was pretty good as well. Everybody put in a good effort into it and obviously Kenny [Roczen] was the quickest in practice. The goal was like, “We’ll see how it goes.” A few years back when I won, I was like, “Oh I’m going to win it,” but this year I was like, “We’ll see. We’ll go with the flow.” But at the end, I was consistent, and everybody was close. Obviously with the rain, the rain was kind of sketchy. The start, a lot of spinning, dropping down was kind of scary. But a lot of mistakes from everybody also spinning off that and then in the whoops too. So, I was pumped I was ahead of Kenny going in through the whoops. I didn’t want to be side by side.

Talking about spinning. When you’re riding a two stroke, obviously you can light up the rear wheel pretty quick. How challenging was it to meter it off the grate like that?
Yeah, I mean even when it was dry, we were spinning off of that gate. Then it started raining and the metal that was past the gate was outside, so it was raining on it. They tried to use a blower and try to clean as much as they could to make it safe for us so thanks to the people over there and also thanks to my team and my mechanic Kyle, and Eric Sorby was also out there helping us. So, that was pretty cool! We had a good time. And like I said, to get it done, I think the rain kind of threw off Kenny a little bit in some of the rhythms because he had to switch rhythm sections, so it played in my favor.

Well speaking of playing in your favor, we don’t talk enough about your technique. At this event, you’re really good at pushing through jumps and staying low. How much does that play into how well you can attack this track and how fast you can go through a section?
Yeah, honestly, I was not able to do it as much as I’m used to like on the 450 just because of the bike and the engine. But I think I started to get better and better, and I had to push hard downsiding everything and getting the wheels back on the ground fast and stuff to be ahead of those guys. We had the new fuel-injected 250 and it was so different than other bikes, like Kenny’s bike or even Barcia’s bike (which do not run EFI). We couldn’t rev it as much as they did and but like mentally, you’re like, “Oh I have to rev it! I have to rev it!” but you don’t have to. It had great power. But mentally you just want to rev every time to go fast but you don’t have to.

Yeah, and you only had a few days on this bike to get ready for this. How hard is it to mentally get used to tripling something, for example, which you wouldn’t think is difficult but then you have to do it on a bike that you’ve never ridden before.
Yeah because I rode the KTM test track that I know on my 450 and then on the 250 it was so different. I still got pretty much every rhythm the same, but it took me a long time. Very, very different bike.

Lastly, first ride in the new O’Neal gear. Talk a little bit about how that deal came together and then how cool it is to win first time out with them.
Yeah, I mean basically I didn’t have any gear contract for next year and then no offers from my previous gear company. That’s straight up like that. I had amazing years with Thor but that’s how it goes in business. I don’t know how to say it differently. So yeah, thanks to O’Neal for being here and being very supportive and excited to have me. That means a lot to me at this stage of my career you know? To be able to have nice gear now and in a very short time, it means a lot. And getting on top of the podium for them is just great. So thanks to them and hopefully we’ll write more stories together.