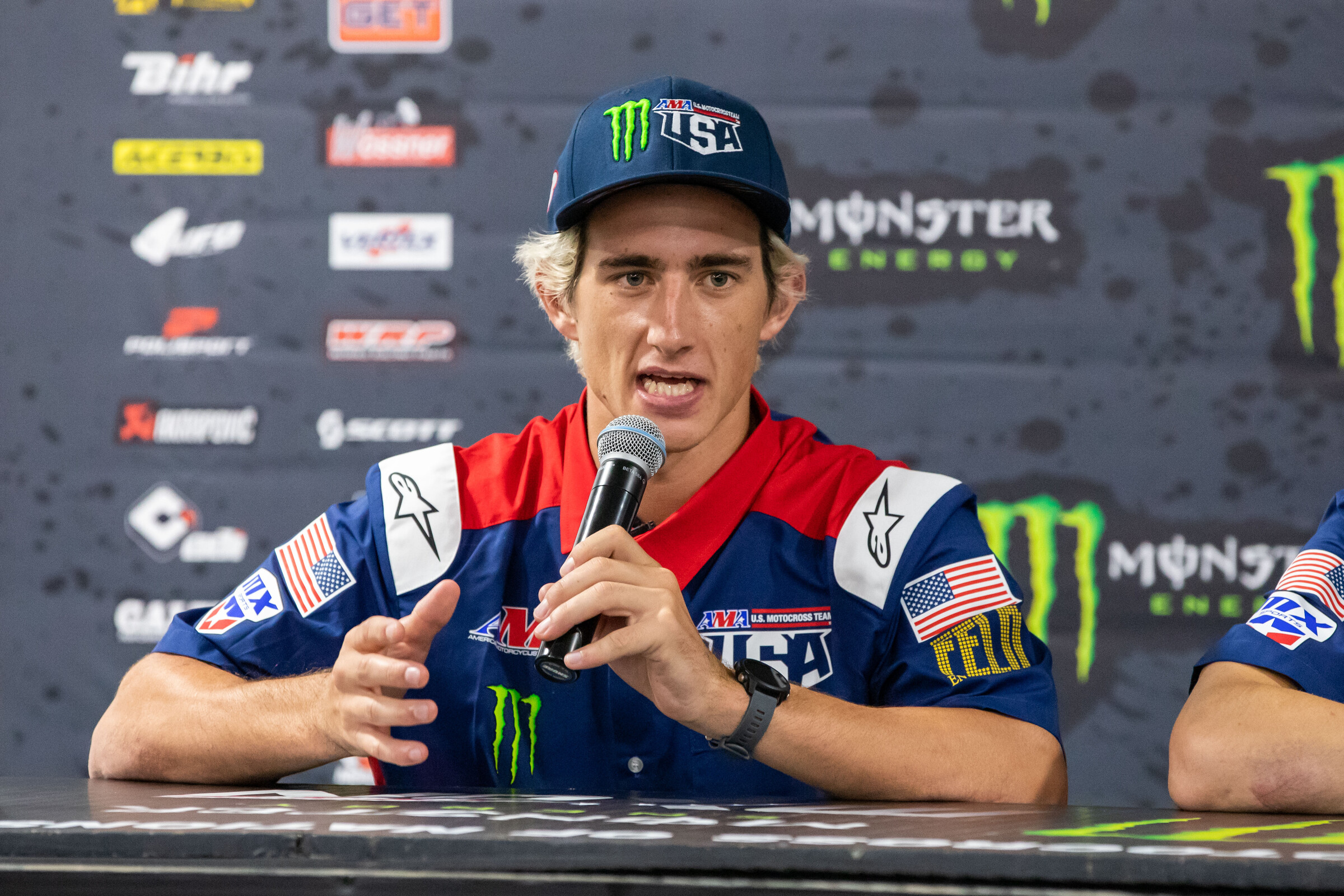 3 on 3: Team USA and Team Australia

At the 2022 Monster Energy FIM Motocross of Nations press conference on Friday, multiple teams spoke to the media about their prep heading into the weekend. Hosting Team USA—Eli Tomac, Chase Sexton, and Justin Cooper—and Team Australia—Hunter and Jett Lawrence and Mitch Evans—are two teams expected to put in strong results this weekend.

Team USA will have Tomac and Sexton, who battled it out for the 450 Class title in the Lucas Oil AMA Pro Motocross Championship, teaming up alongside of Yamaha 250cc rider Justin Cooper. Sexton, a local from Illinois, said he trained for this event just as hard as he did ahead of Pro Motocross. Tomac, the 450 Class champion, took a few days off before returning to his usual program to stay sharp. Cooper missed all of Monster Energy AMA Supercross with a foot injury but towards the latter half of the season he picked up where he left off in 2021. He essentially stayed on the same training program he was on during Pro Motocross, but with breaks on the weekends.

Team Australia will be led by two-time 250 Class Pro Motocross champion Jett Lawrence, who is making both his MXoN debut and his 450cc debut this weekend. The 19-year-old Aussie will have his older brother Hunter and his good pal Mitch Evans completing the Honda HRC trifecta. The Lawrence brothers have known Evans for years, so for the trio to be working together is something they are all looking forward to. While Jett is making his MXoN debut, Hunter and Evans are returning to the team again.

Hear from the team managers—Roger De Coster and Michael Byrne—and the team ahead of the 75th MXoN.

Roger De Coster: “I feel really good about the Nations this year. These guys are 100 percent happy to be here, the whole atmosphere, everyone seems to be on board and do everything they can to take the trophy back. Up to now we’ve had great weather and hopefully it stays that way."

Eli Tomac: “It’s great to have a redemption round, ‘18 wasn’t good at all. We’re here and I have a lot of confidence in my team, and I had a great year indoors and outdoors. We’re as ready as ever. It very well could be my last time with Team USA, right now I have a SX-only contract signed for next year. Right now, I’m just in the mindset to give it all we’ve got. That’s all we can do.”

Justin Cooper: “I think this weekend will be a little easier on us just because it’s in the USA. I definitely took a lot from Assen, both good and bad, and I’m looking to take that experience into this weekend. [The crowd] I think it’s more exciting and it’s going to be one of the biggest races. We’ll have a big crowd behind us, but we need to focus on the track and focus on ourselves.”

Chase Sexton: “This is definitely a unique race, and for me to be my first time on the team, and I was battling Eli all year where we were trying to beat each other, and now we’re part of the team. I think this weekend we can come together, and if we can ride like we did all summer we will be in a good spot. I’m excited, pumped to be at RedBud which is close to home for me. I don’t think there can be a better story for me, my first Motocross of Nations and it’s two and a half hours where I grew up, I’ve raced this track a lot. I turn 23 today and I get to race this race for the first time. I’m excited to be up here with these guys.”

Chase Sexton: “I took the week off after Pala, I only rode at the Alpinestars ride day. After that, the next two weeks, I trained probably just as hard as I did pre-season. I want to do well here so I’ve prepared really hard for it. Hopefully that hard work pays off.”

Michael Byrne: “It’s great to have three really solid guys to have a shot at it, but this weekend you’ve got to try to manage the emotions. It’s a team event and you can’t go after it individually, but obviously you go for it if it’s there. We’ve had a lot of great teams before, and it doesn’t always work out. So we just need to have good days."

Mitch Evans: “For sure we have more experience this year, we’ve all been on the world stage for a while now, so we’re in a good position to fight for the podium or the win, and not only this year but over the next few years. We go a long way back. The earliest I can remember Hunter and I racing was 2007 or something like that, we’ve always gotten along really well and we’ve been good family friends. We keep in touch with each other. When I was a kid, duct taping him [Jett] to a water loo, I certainly didn’t expect to be together on team Australia."

Hunter Lawrence: “It would be awesome [to win]. It’s something you always dreamed of. I think we have a great team and we have a shot at it. I think Australia’s best was a third and hopefully we can top that. It’s awesome my brother is here and that Mitch is here, too. This is like the first year we’d had the full A Team of the new generation Australians."

Jett Lawrence: “It’s [the CRF450R] been pretty good, it’s a whole new learning curve for me. With the 450 you fix one thing and another thing comes up. I’ve been learning to ride it more like a 450 instead of a 250. I think the biggest challenge will be finding the confidence to hit the [LaRocco’s] Leap! I had an excuse on the 250 but now I don’t! Hopefully I can keep the spokes intact!”

Hunter Lawrence: “When you’re in the bottom you’re at the bottom and all you see is more [the hardships endured in Australia and Europe]. You can hardly imagine where we are now, we’re extremely grateful to be in this position now, even away from that."

Mitch Evans: “Just like the boys here, we’ve had hard times and when you come from Australia you’ve got a bit of a hard road, but that just makes you tougher.”