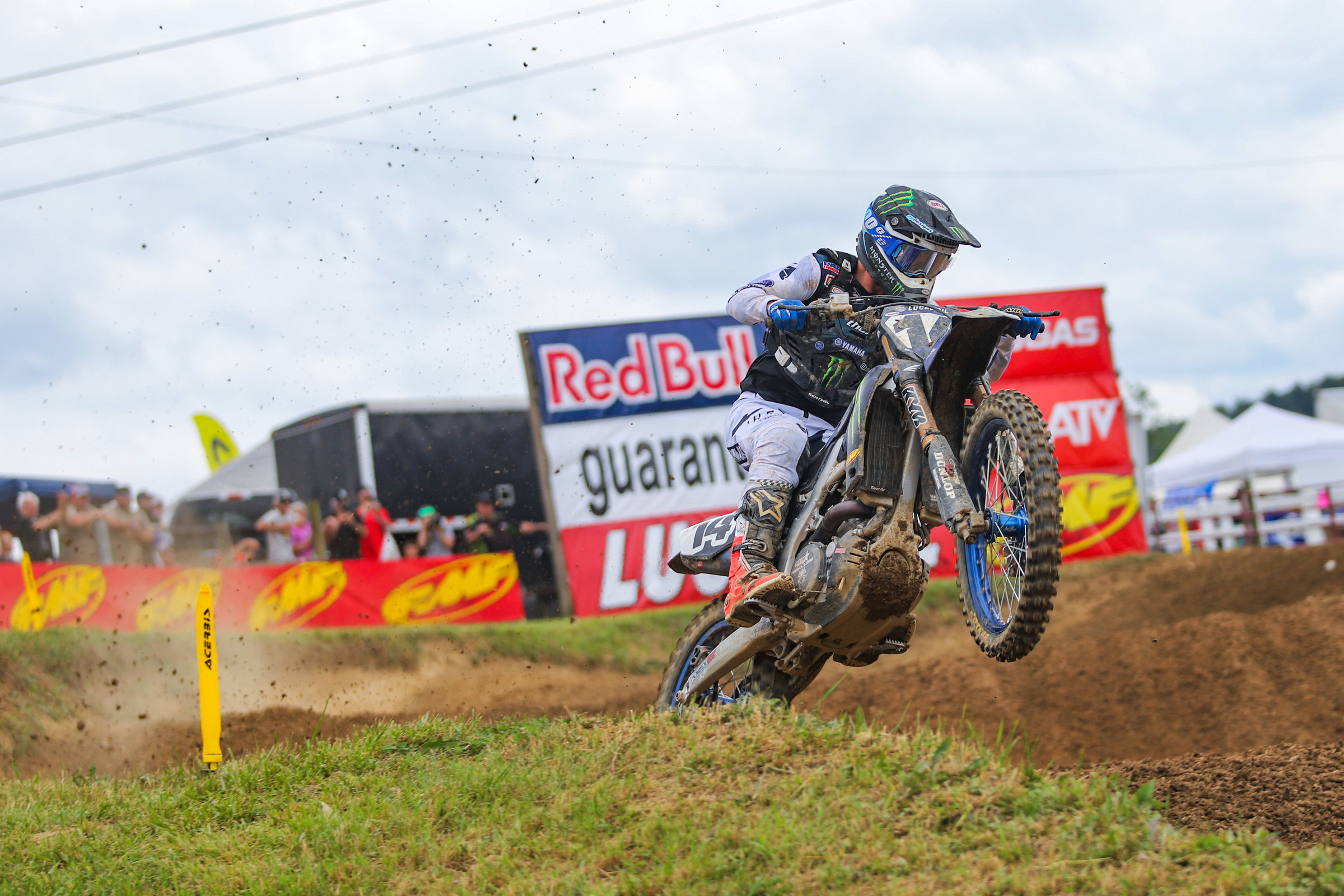 We’ve reached the final year, 2021, in our MAVTV+ 50-Day Countdown to the start of the 2022 Lucas Oil AMA Pro Motocross Championship. We are going over each of the 50 years of AMA Pro Motocross, beginning with 1972, as we head to today’s season opener at Fox Raceway in Pala, California.

The 2021 Monster Energy AMA Supercross season began in similar fashion to how the 2020 season ended: several rounds in each city, then move to the next city and repeat so on and so on. We saw the mid-week races turn to Tuesday and the series managed to get all 17 rounds in, despite still dealing with COVID-19.

The season begin at the Houston 1 Supercross as COVID-19 regulations kept California fairly locked down still, forcing the series to start outside of California for the first time since 1988 season when there was an Anaheim Supercross, but it was not an AMA-sanctioned race. At the opening round, it was Justin Barcia and Ken Roczen battling for the race win, although Roczen appeared not to push the envelope knowing his aggressive-natured competitor. Barcia went on to claim the win—his third consecutive opening round main event win. At round two, it was a pair of young guns out front: Chase Sexton and Adam Cianciarulo. Sexton, who jumped to the premier class for the 2020 Lucas Oil AMA Pro Motocross Championship and claimed an overall win following his second straight 250SX East Region title, was leading his second 450SX main event ahead of the sophomore Monster Energy Kawasaki rider. Cianciarulo would go down in a sand turn before a rhythm section and then moments later Sexton would crash in the same spot! Cianciarulo would be okay in his crash, eventually finishing 12th, although a third at the next round would be his only podium of the season due to a broken collarbone at the eighth round, Orlando 2 Supercross. Sexton missed six races with a right shoulder contusion sustained in the crash. Eli Tomac moved up two positions to take the main event win ahead of Dylan Ferrandis and Justin Brayton. It was an unbelievably wild start to the season: not only two different race winners in the first two rounds, but we saw six different riders in the six podiums spots at the first two races for the first time since 1992. At the third Houston race Cooper Webb claimed his first win of the season after a last lap pass on Roczen. Then, the championship battle really started to heat up.

Roczen rebounded by winning the fourth, fifth, and sixth rounds as he swept the trio of races at Lucas Oil Stadium in Indianapolis. Then Webb claimed the two races in Orlando, Tomac claimed the Daytona Supercross, then Webb clicked off wins at all three Arlington Supercross events. Tomac was not quite on the level of Roczen and Webb, who were trading blows back and forth on the regular. Tomac (stealing a late win away from Sexton), Roczen, and Webb split the three Atlanta races as the #2 had a proverbial “nail in the coffin” night at the last race as he caught and passed Roczen for the win late—something we had seen several times again and again. At round 16, Musquin became the fifth different winner of the season—the first outside of the Webb, Tomac, and Roczen trio since Barcia won the opener. At the final round, Webb put in a statement ride to claim his eighth main event win of the year as he claimed the title. After two years of struggling to find his way on the YZ450F, Webb claimed 19 main event wins and two 450SX titles from 2019 through 2021.

In the 250SX East Region, which started first this year—confusing, yes, we know—Christian Craig won the opener over Austin Forkner and Colt Nichols. Honda HRC’s Jett Lawrence won the second round but did not start the fifth round due to a hard crash in his heat. He was officially out of the title fight, which began boiling down to Yamaha teammates Craig and Nichols as Forkner and RJ Hampshire were also injured and out of the championship again. Nichols had an eight-point lead going into the final two races with his teammate still close behind, but Craig would suffer an ankle injury in qualifying that ended his title hopes, sidelining another rider in the already banged up 250SX East Region. Jett Lawrence went on to win the Dave Coombs Sr. East/West Showdown finale, but Nichols won the title. The final spot on the podium was Jettson’s teammate he knows pretty well: his older brother Hunter.

When the 250SX West Region became, it was all but predictable. Jeremy and his older brother Alex Martin did not have the same luck the Lawrence brothers did: their season started off with Jeremy dislocated his shoulder in the first jump of the rhythm section and Alex getting knocked out one turn later. Justin Cooper won the first “West Coast” race—which took place in Florida at the Orlando 2 Supercross—and then Cameron McAdoo earned his maiden 250SX main event at Daytona, following by his true rookie teammate Seth Hammaker winning the first race in the trio in Texas. Then Hunter Lawrence earned his maiden 250SX main event win at the Arlington 2 Supercross. Before we knew it, we had four different main event winners in the first four rounds and three of them were first-time winners! It was insane!

Cooper became the first to two wins by winning the Arlington 3 Supercross and he reclaimed the points lead from McAdoo, starting to build a lead just as his teammate Nichols was holding down the opposite region. Yet another Monster Energy Yamaha Star Racing rider joined the party as Nate Thrasher was another first-time (and surprise) winner at the Atlanta Motor Speedway round. Cooper won the mid-week race at the speedway, but Thrasher struck again at the third speedway race, once again going through the LCQ en route to the win. As mentioned, Hunter Lawrence joined his brother on the podium at the finale as Cooper cruised home a ninth-place finish to give him the 250SX West Region title. Jett finished third in 250SX East and Hunter second in 250SX West and they celebrated with a huge hug followed by a wheel-to-wheel burnout.

The Lucas Oil AMA Pro Motocross Championship started and the 250 Class continued the craziness the 250SX West Region saw early on. For the first time in the history of AMA Motocross, we saw five different riders win the first five overalls to start the season: Jett Lawrence (Fox Raceway 1 National), Justin Cooper (Thunder Valley Naitonal), Jalek Swoll (surprise 1-3 at the High Point National for not only his first professional overall win, but also his first moto AND overall podium finishes), RJ Hampshire (RedBud National), and Hunter Lawrence (1-1 at the Southwick National). The name we thought we might see win early was Jeremy Martin, back after missing supercross. But a wrist injury early on hindered his results. Come his home race, the round six Spring Creek National, J-Mart righted the ship with a 1-1 day to become the sixth different overall winner in the first six rounds as the field continued to wrist history. Unfortunately, J-Mart was out of the title fight due to missed time.

Cooper took the points lead from Jett Lawrence, but a thumb injury at the Washougal National the #32 kept quiet ended up taking some out of him as Lawrence reclaimed the points with a 2-1 finish at the Unadilla National. Lawrence won four straight motos (Ironman and the Fox Raceway 2 Nationals), but Cooper was still within reach at the finale.

Cooper won the first moto as the championship leader ran into trouble before finishing eighth. In the second moto, the #18 got wild again, and Cooper took the moto win as all eyes followed Jettson around the track. The 18-year-old regrouped and managed to pick off third place late from rookie Max Vohland to claim the title by just six points over Cooper. Hunter finished third in the standings as the Australian brother put in one of the best brother-duo full years of AMA Supercross and Motocross ever (well, until 2022 of course when Jett won 250SX East, Hunter finished second in 250SX West and they claimed half of the main event wins—8 of the 17—and one finished on the podium at 16 of the 17 rounds. Plus, they both landed on the podium at the Atlanta Supercross East/West Showdown.)

Watch the 250 Class season highlights below:

In the 450 Class, rookie Ferrandis made an instant impact in the premier class, striking first by edging out Sexton at the finish line by 0.099 seconds of the first moto! Roczen won moto two, but Ferrandis’ 1-3 gave him his first premier class overall win. Roczen reclaimed the points by the end of round two because he railed off moto wins in the second, third, and fourth motos of the year. At the third-round High Point national, Ferrandis put in a great ride to finish 2-2 for the overall as first moto winner Cianciarulo finished fourth in moto two, and Tomac finished sixth before winning moto two. From there, Ferrandis would not give up the points lead. Ferrandis, Plessinger, and Roczen battled at the RedBud National before moto two went to Tomac. In the Massachusetts sand the following week, Ferrandis once again won moto one as Tomac pieced an incredible ride in moto two to claim the race win, although his 8-1 finishes landed him fourth overall. Oddly, Tomac continued to struggle in the first motos of 2021. By seasons end, ET3 won a total six motos, all which came in the second motos. Tomac would pick up two overall wins on the season at the final two races.

In the later stages of the season, Ferrandis was starting to run away with the title. Roczen and Ferrandis had a great battle at the Budds Creek National, but the Yamaha rider was on another level, uncorking the massive uphill quad and charging to win the second moto. The #14 ended up finishing on the overall podium at all 12 rounds and claimed 22 moto podiums out of the 24 total motos. He claimed eight moto wins and six overalls. Roczen had seven moto wins and two overalls (both of which were 1-1 days) as Justin Barcia (Spring Creek National) and Chase Sexton (Washougal National) earned one overall each. It was a full euro invasion with Jett Lawrence becoming the first Australian rider in AMA Motocross history to win the 125/250cc Class title and Ferrandis claiming the first French premier class title since Jean Michael Bayle in the 1990s.

And what happened to 2020 450 Class Champion Zach Osborne? An unfortunate back injury sidelined him for most of supercross, and his Pro Motocross title defense lasted until only two rounds before he had to withdraw from the series. Osbornes officially scored 13-5-12-39 in the only four motos he raced in 2021. He would return to the circuit to help the Rockstar Energy Husqvarna team but has not raced professionally since, as he announced his retirement from the AMA Supercross and Motocross scene in November 2021. Luckily, the #16 will stay in the sport, he signed a two-year brand ambassador deal with Husqvarna in March of 2022.