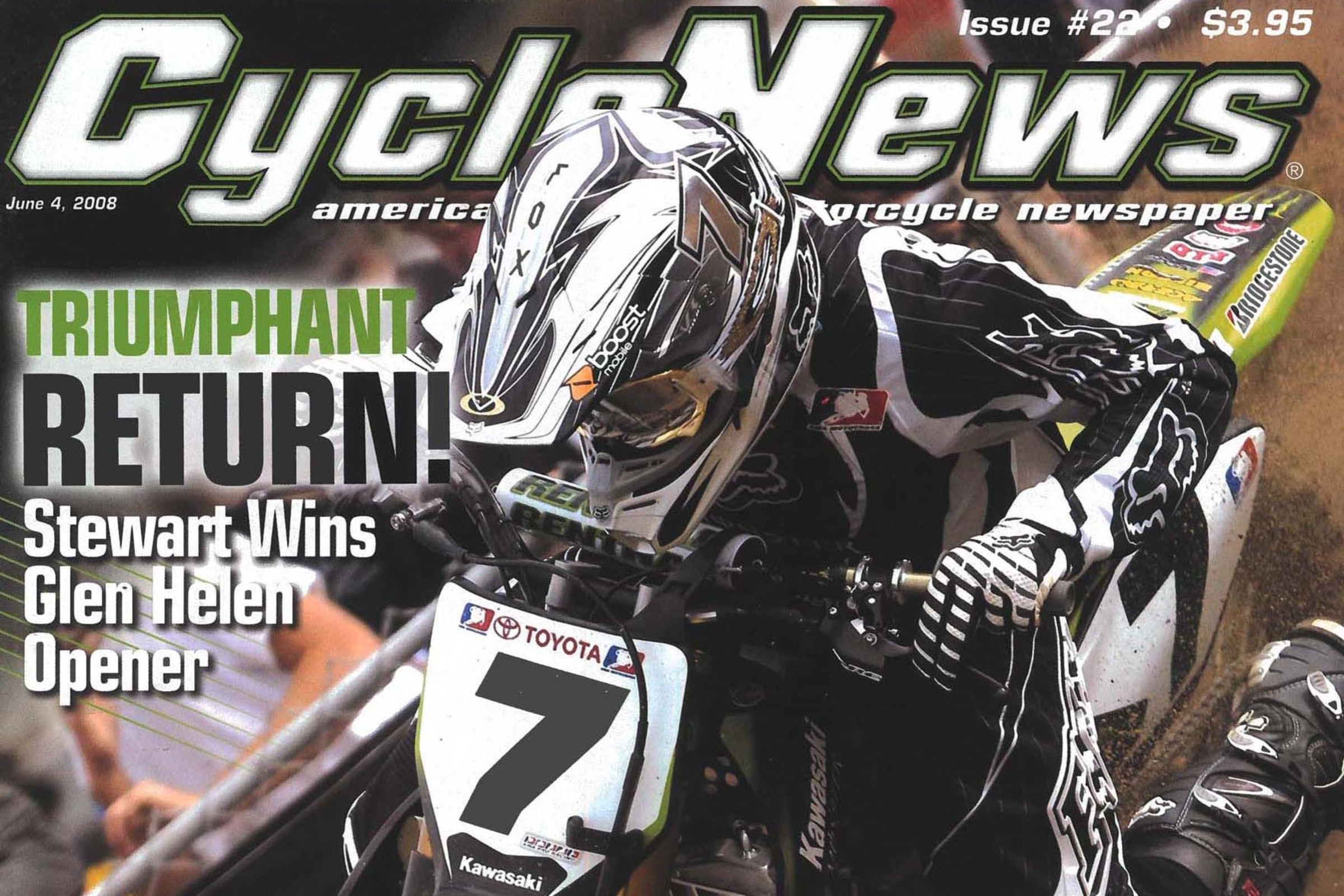 The MAVTV+ 50-Day Countdown to the 2022 Lucas Oil AMA Pro Motocross Championship hits 2008, as we go over each year of the series’ history, beginning with 1972. This 2008 season loomed as the first without Ricky Carmichael on the gate but was quickly defined by another familiar face doing Carmichael-like things. In fact, in this season, James Stewart became the only other rider besides Carmichael to log the incredible perfect season.

However, like Carmichael’s second 24-0 bid in 2004, no one quite knew Stewart’s status coming into the summer of 2008, because he missed supercross due to a torn ACL. Stewart had hurt the knee during the wild 2007 450 title fight (the injury knocked him out of the AMA Motocross series and Grant Langston won the title) and attempted to rehab it and race in Monster Energy AMA Supercross in 2008. It didn’t work. Stewart was facing his old foe Chad Reed, and they split the first two rounds of the stadium season until Stewart’s knee gave out, and he announced at round three that he was finished with supercross and hoped to return for the motocross season. Reed, meanwhile, went on to romp to his second AMA Supercross Championship, topping Kevin Windham. Reed and his team didn’t race motocross, though.

Langston never made it to the gate in 2008 with his #1 plate, as a mysterious eye injury knocked him out of supercross. After much searching, it turned out he had contracted eye cancer. Sadly, he would never fully recover the vision needed to race again at his old level.

As for Stewart, five months is a short time for ACL recovery, but he and his trainer Aldon Baker (whom Stewart had hired after Carmichael retired) got it done, and he left no doubt by going 1-1 at the Glen Helen opener on his Monster Energy Kawasaki. In the early rounds, Stewart’s closest pursuer was Mike Alessi, now on the factory Rockstar Makita Suzuki team. Alessi was doing everything he could to keep Stewart in sight, even speeding through the final lap of each moto while Stewart was cruising to get the gaps down to manageable distances.

Here’s something incredible: Stewart won the first 11 motos of the season, and Alessi finished second in nine of them! Then tenth moto was RedBud’s second moto, and the outcome was terrible for Alessi. He crashed on the first lap on the track’s big ski jump downhill. Because Alessi was near the front of the pack, he got landed on and ran over by several riders. It was brutal, and the injuries ended his season.

This left one less rider between Stewart and his looking-inevitable perfect season. Kawasaki was also racking up win after win in the 250F division, with Ryan Villopoto heading to his third-straight AMA Motocross Lites Championship. Villopoto’s old rival Jason Lawrence won the first moto of the season, and Kawasaki’s new recruit Austin Stroupe won the overall that day. Unfortunately, both talented riders would soon run into too many off-track issues to keep these results going into the future. Villopoto won 19 motos that summer. One of his few losses came at Washougal, where Suzuki’s Ryan Dungey, who had been trying for a year and a half to overcome Villopoto for a national win, finally held on for the win in a great duel. Dungey followed with a win at his home track at Millville, putting him as an early favorite for 2009, once Villopoto was off to the 450s.

Stewart didn’t have many close calls, except for a muddy race at Unadilla where a virtual unknown got closer than anyone to taking him down. New Zealand’s Cody Cooper, a privateer with the Suzuki City Racing team, had a solid top-ten level season, but on that day he was on it, and with Stewart trying to ride conservatively in the rain to not blow his streak, the Kiwi got darned close in the final laps. That’s a footnote for history: Cody Cooper was the one that nearly up ended Stewart’s streak.

Ultimately Stewart pulled through for his own 24-0 perfect season, a remarkable run. Further, his teammate Tim Ferry finished second in points, and combined with Villopoto’s dominance in the 250s, well, it was a summer filled with green.

That would end, though, because Stewart was heading to Yamaha and the San Manuel team for 2009. That meant he would be supercross only, and would not defend his title. He did have one more order of business to get through, as part of an all-Kawasaki squad at the FIM Motocross of Nations in England. Stewart, Ferry, and Villopoto pretty much had it on lock all weekend, until the very end when Stewart crashed in the final moto and couldn’t get his KX450 to restart. As he sat there kicking and kicking (great irony since he had just completed an error-free 24-0 run through AMA Motocross) it was up to Ferry to complete a come-from-behind charge and save the team. Ferry did it, and Team USA’s win streak was up to four years.

And checkout this unseen footage of Villopoto, Stewart, and Ferry testing for MXoN that vurbmoto posted last year.