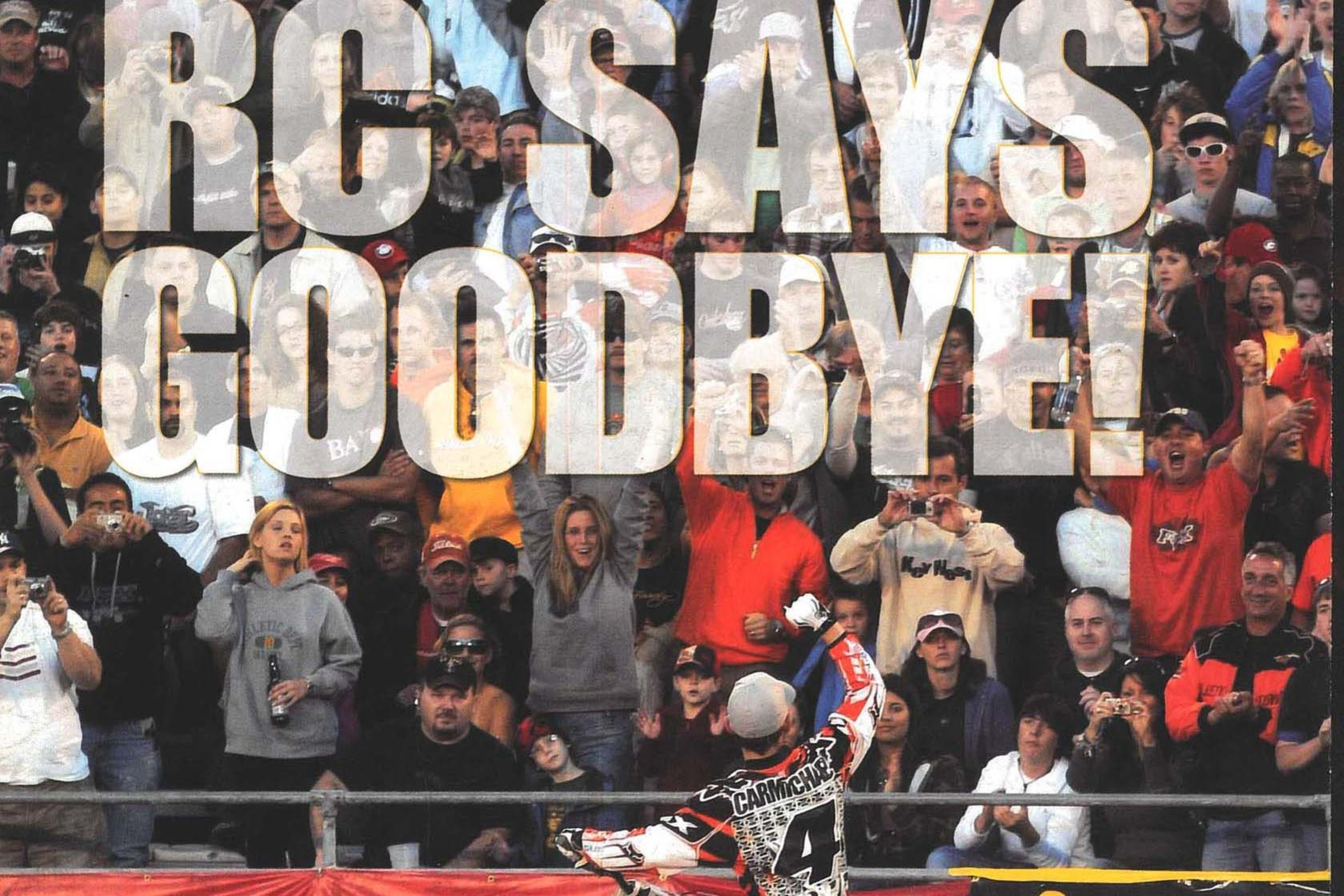 After another very busy weekend we’re back with the MAVTV+ 50-Day Countdown to the start of the Lucas Oil AMA Pro Motocross Championship, which is celebrating 50 years in existence this summer. We’ve been counting down each of the 50 years of the series, which began in 1972, and today we reach 2007, the year the greatest of all time decided to hang up his boots.

From 1997 through 2006, Ricky Carmichael absolutely dominated outdoor AMA Motocross in America. In winning ten straight AMA Pro Motocross titles during that time, the first three in the 125 class, then seven straight in the 250 class, Carmichael was never truly challenged for any of those titles. As a matter of fact, Carmichael clinched all ten of those titles before the last round, which is just an astonishing accomplishment. He also won every AMA Supercross title from 2001 through ’06, with the exception of the 2004 series, which he sat out due to a knee injury. Add it all up and RC had 15 major titles to his credit, easily the record. He also had a total of 142 wins—96 outdoors and 46 AMA Supercross wins—but he wasn’t quite finished yet. While Carmichael announced his retirement from full-time racing beginning at the end of the ’06 season, he also said that he would race select events in 2007. He would do seven rounds of AMA Supercross, six rounds of AMA Pro Motocross, and his last race would be the 2007 FIM Motocross of Nations, which were set to be held in September of ’07.

With his SX crown up for grabs, attention turned towards his heirs apparent in close, bitter rivals James Stewart and Chad Reed. The Kawasaki-mounted Stewart had won the ’06 FIM World Supercross title, in a weird points scenario that saw him narrowly lose the AMA Supercross crown to Carmichael. Reed was right there too, literally tied in points with Stewart in the AMA standings at 336 points apiece, two less than Carmichael. Although guys like Kevin Windham, Tim Ferry, David Vuillemin, Ivan Tedesco, and more in the crowded field, it appeared to all that it would be between Stewart and Reed, with Carmichael occasionally visiting the podium as a part-timer.

As it turned it, Stewart had the upper hand most of the time in supercross rounds, winning the first three rounds, opening a lead he would never surrender on his way to his first full AMA Supercross Championship. Reed would only win a single round (San Diego) in one of his less successful seasons. But the real surprise was Carmichael, who would win two rounds (San Francisco and St. Louis) and finish second the other five times.

When AMA Pro Motocross started up, everyone figured Stewart would take over completely, but it didn’t work out that way. In the last amazing act of his AMA Pro Motocross career, Carmichael would win all six AMA Motocross nationals that he entered that summer, and then true to his word, Carmichael parked his Suzuki RM-Z 450 after the Spring Creek National. At Unadilla, the first race that Carmichael missed, Stewart was already out of it after a big crash in practice. This left a very rare opportunity for someone else to win without either Carmichael or Stewart on the gate. The win went to Windham.

Later, at Washougal Stewart twisted his knee, which left the championship wide open. Into that void raced Kawasaki’s Tim Ferry, Yamaha’s Grant Langston, Honda’s Andrew Short, and KTM’s Mike Alessi among them. In the end it was Langston who got hot at the right time, winning the last three rounds to claim the first AMA 250 Pro Motocross for anyone other than Ricky Carmichael since 1999.

In the 250 class a civil war of sorts broke out between close friends and Monster Energy/Pro Circuit Kawasaki teammates Ryan Villopoto and Ben Townley. RV was the defending series champion while Townley was the ’04 FIM Motocross World Champion from New Zealand. The two would trade wins throughout the summer but it was Villopoto who got the most wins and the title.

When the season ended Carmichael suited up one more time for the ’07 MXoN at Budds Creek, but this time Villopoto stole the show. In one of the most masterful and dominant performances in the history of the Motocross of Nations, Villopoto became the first rider in history to sweep both motos of the event on a 250F, topping all of the 450s as well as the other 250s. Carmichael crashed in the first turn of the MX1/MX2 moto and passed everyone else in the race, save for Villopoto. In the last moto of his career, MX1/MX3, Carmichael led his other Team USA teammate, Tim Ferry, across the finish line for the last victory of his career. The GOAT rode off into the sunset on a seven-race winning streak, counting the six AMA Pro Motocross races and the MXON. It was an amazing encore.