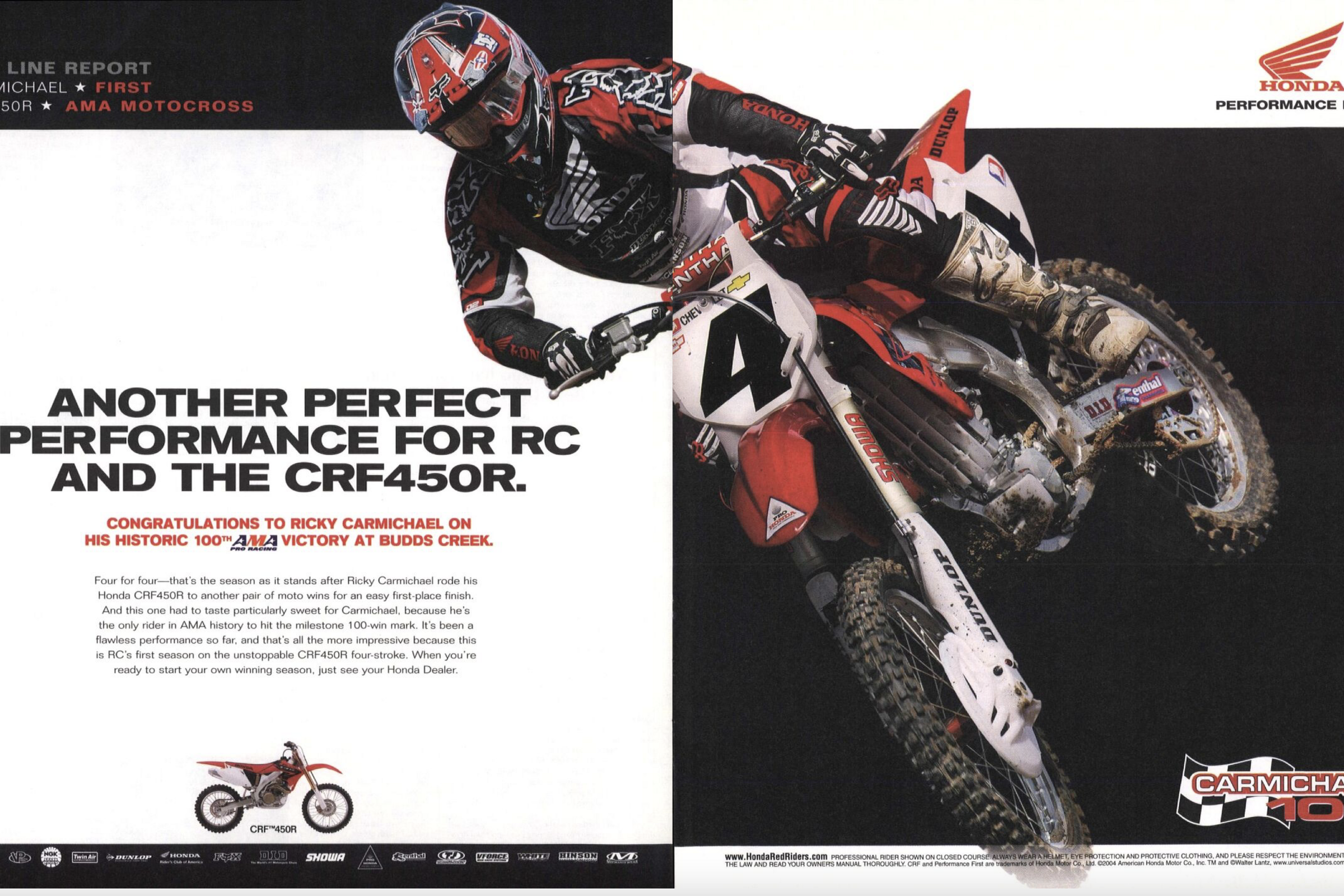 Today, we’ve reached 2004 in our MAVTV+ 50-Day Countdown to the 2022 Lucas Oil Pro Motocross Championship. If you want to check out the racing on TV and the internet this year, check out MAV TV network and MavTV Plus streaming.

Entering the summer, there was some wonder as to what would happen in the big bike class, for 250 two-strokes and 450 four-strokes. Ricky Carmichael had suffered the first major injury of his professional career, with a torn ACL costing him the 2004 AMA Supercross season. He vacated the championship and to no one’s surprise the crown went to Chad Reed, the young Australian on a Yamaha YZ250 who had taken the fight down to the wire against Carmichael in 2003. Reed held off a solid challenge from Kevin Windham to become the first non-American AMA Supercross Champ since Jean-Michael Bayle’s breakthrough season in 1991.

Carmichael said he would be back for motocross season, but on a new machine, as he was switching from the CR250R two-stroke to the CRF450R four-stroke. Carmichael won every moto of 2002 on the CR250R, but Windham was a game competitor in ’03 riding the Honda thumper. RC went to work on his knee and learning the four-stroke, but everyone wondered if he could come back and adapt. In fact, there were enough doubts that by the time he started racing again, he was already switching teams! Carmichael’s Honda deal was up at the end of ‘04, and Carmichael wasn’t feeling the love. He shocked the industry by announcing he would be moving to Team Suzuki for 2005. Suzuki? Yes, the brand had been struggling as of late, but they were willing to take a chance that RC could get back to his old status, and he was willing to take a chance on them. Carmichael announced he would go to Suzuki nearly two months before the Pro Motocross began, when he would again be on a Honda to finish out his three-year deal.

If there were any questions to how this would all go, they were answered immediately. The new Carmichael was the same as the old, as he dominated the opener at Hangtown with 1-1 scores. He even had Seabiscut on the back of his pants, a nod to a popular movie of the time about a race horse that overcame a broken leg. Carmichael kept on winning again and again, and soon the talk started: were we going to see another 24-0 season?

Well, actually, how about two? James Stewart was still in the 125 class and still on an actual 125. The class had widely switched to 250 four-strokes, and Kawasaki now had one of its own, but James elected to stick with what he knew. At the Hangtown opener Monster Energy/Pro Circuit KX250F mounted Stephane Roncada gave Stewart fits all day, leading some to think the 250F would be too much for Stewart to overcome. But Roncada never replicated that day’s magic, and Stewart started to dominate every moto. Power deficit? You couldn’t tell.

By the halfway mark of the series, Stewart and Carmichael were both undefeated, which meant we were looking at the real chance of double 24-0 seasons, and all-time hype for a 2005 clash when Stewart moved to Carmichael’s division. That was really all there was to talk about. You literally knew who would win every race before the races even started.

Stewart only erred once. He won RedBud’s first 125 moto but crashed in the first turn of moto two. Everyone braced for a comeback for the ages to keep the streak alive, but instead he crashed again and pulled out of the race. His perfect season was over after nine-straight moto wins to start the year.

The winner that day at RedBud was the unkillable Mike Brown, the 2001 125 National Champion who had been back from the dead over and over, and at this point was back with Yamaha of Troy, the same team he had ridden for several times under the Honda of Troy banner in the 1990s. Brown went 2-1 on a YZ250F.

Stewart got it back going after that and won every single moto for the rest of the year. Total score: 23-1. As a fun twist, Stewart actually jumped on a KX250F at the final race of the year at Glen Helen, and of course he won that one, also. That makes his 1-1 at the next-to-last round at Steel City the last win ever for a 125 two-stroke.

With Stewart vacating the 125s for the next season, who was in line to take over? Well, Suzuki had hopes for Broc Hepler, who in his rookie professional season finished second in points, just edging Brown, who took third.

CarMichael Handled the business the entire way, going 24-0 on his walk off with Team Honda, culminating it by wearing the #1 plate at the Glen Helen finale instead of his customary #4. Carmichael had completed two perfect 24-0 seasons now, and the two nationals he lost to Kevin Windham in 2003, at Unadilla and Washougal, were the only outdoors losses he took over a three-year span. Two losses in three years!

But that was then. The summer of 2004 was really just a season-long preview of Stewart versus Carmichael in 2005. As such, Team USA didn’t compete in the 2004 Motocross des Nations, because Carmichael was transitioning to Suzuki and back to supercross after skipping that ’04 indoor campaign. Stewart was transitioning to a 250. Everyone was in full hunt and kill mode in the off-season of 2004, readying for one of the most anticipated seasons ever when AMA Supercross hit Anaheim for ’05.