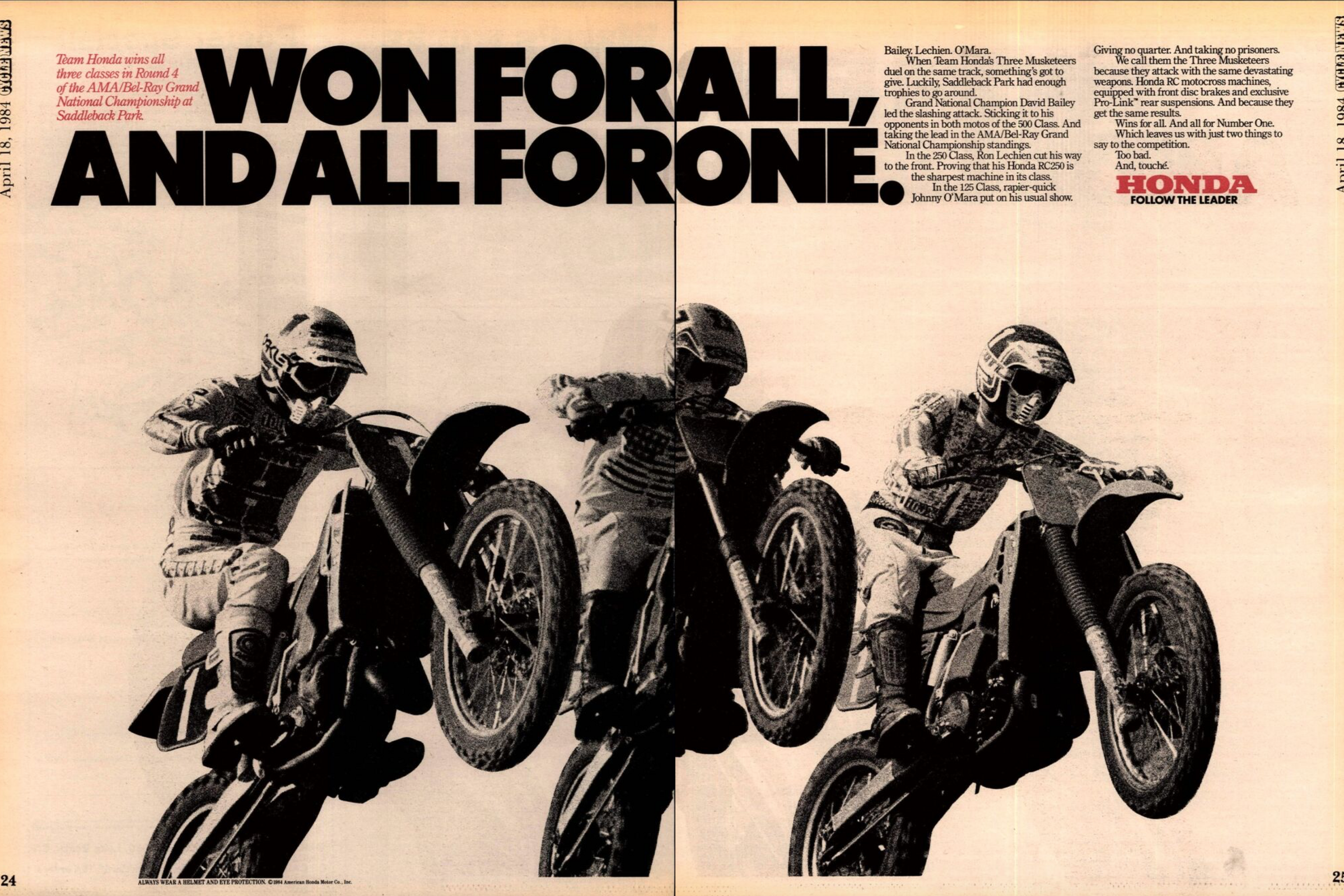 As we approach the opening round of the 2022 Lucas Oil AMA Pro Motocross Championship, we are counting down to the days by going through each of the 50 years in the history of AMA Pro Motocross. Today, the MAVTV+ Countdown reaches 1984, a very confusing year for everyone.

Before the season even started a conflict broke out between the AMA and the supercross promoters of the time (PACE Motorsports, Mike Goodwin, etc.) who called themselves InSports. The promoters decided to do their own series, all except Jim France of Daytona and Talladega fame. He decided to stick with the AMA, which was set to have its own tiny two-race series. In the end—and the end didn’t happen until the series had already started—cooler heads prevailed, but not before confusing schedules and articles came out. The points were later tallied (though somewhere out there you can still find a short 1984 AMA Supercross final point standings that shows Kawasaki’s Jeff Ward as champion, and not the man who ultimately won the title using all the races, Honda’s Johnny O'Mara).

Motocross would still have its AMA Wrangler Grand National Champion concept, and David Bailey would be allowed to wear that nifty blue plate with #1 on it, which made it really confusing when Honda moved the ’83 250 Pro Motocross Champion to the 500 class, which Yamaha’s Broc Glover had won the year before. That meant that throughout the ’84 season there would be two riders wearing #1 in the 500 Nationals, and it was the two guys who were way, way out in front of everyone else in every moto! Ultimately Bailey would prevail on his works Honda, as Glover was relegated to a production model YZ490 that left him badly outgunned.

In the 250 class Honda slotted their new hire, 17-year-old Ron Lechien, who left Yamaha because of a loophole in his contract that said he would get works bikes. When Yamaha decided to race production machines, he walked. The Dogger was incredibly fast at time, but also inconsistent. The title in this class ended up going to Ricky Johnson, who was on that very same production YZ250 that Lechien didn’t want to ride! Also that season, privateer Alan King of Team Tamm shocked everyone when he won the Hangtown 250 National, also on what was basically a modified production Honda CR250.

Some Washougal highlights from 1984 and MotoWorld:

Saddleback hosted its last national in 1984 before the Irvine Company that owns the land shut down the track due to ongoing liability and injury lawsuits. Here what the last national looked like at the famous track:

Finally, in the 125 class, there was another two-horse race between defending champion Johnny O’Mara and Jeff Ward. They went after one another in every moto of the 10-round series, with Wardy getting the edge and his first championship title. But as mentioned above, O’Mara would end up the slightly more prestigious AMA Supercross crown.

And the Wrangler AMA Grand National Champion? It was once again David Bailey of Team Honda, though the AMA decided to drop the program when Wrangler didn’t renew its contract. Oh well!