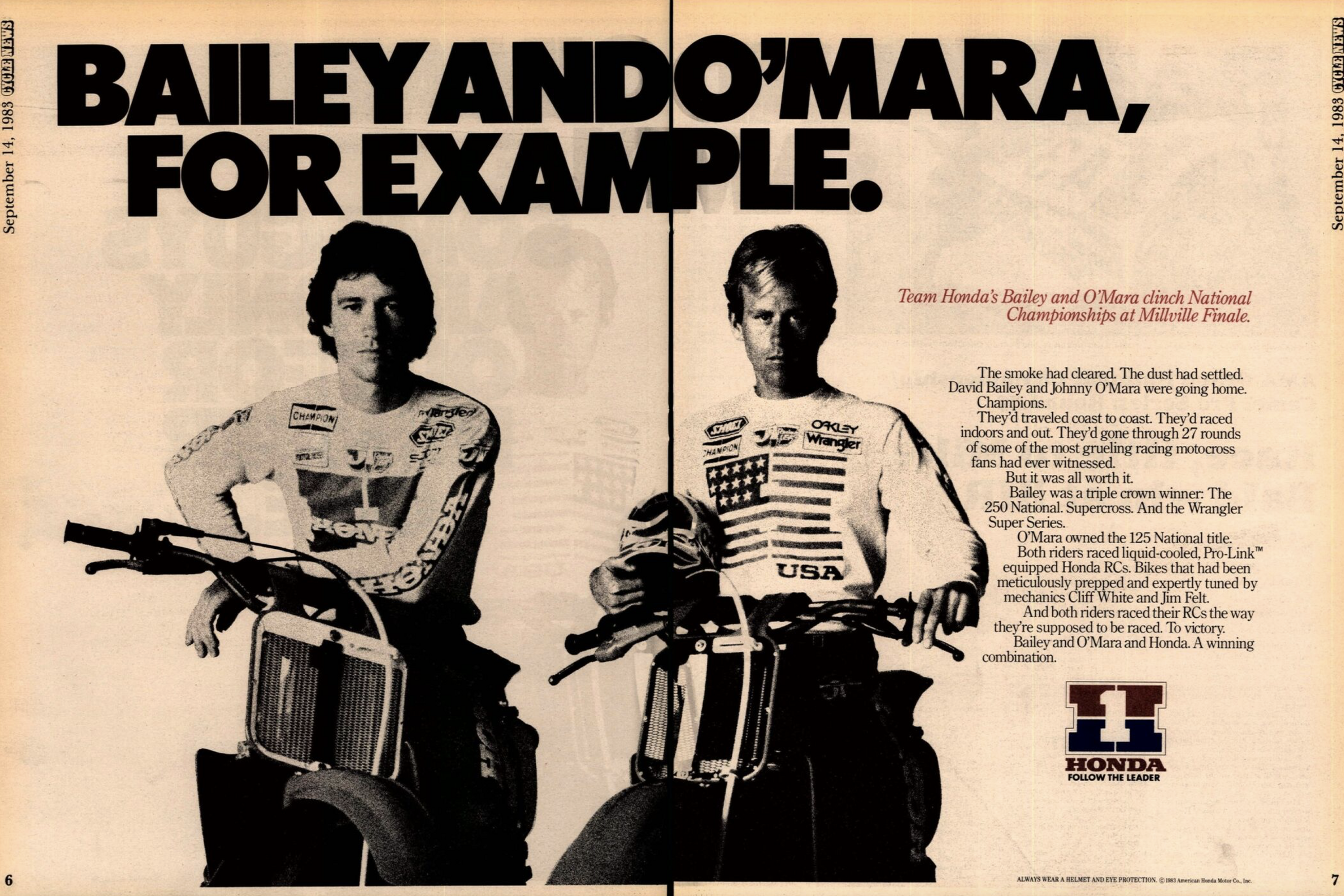 Today we reach 1983 in our MAVTV+ 50-Day Countdown to the opening round of the 2022 Lucas Oil AMA Pro Motocross Championship, which is celebrating 50 years of American motocross this season. We are counting down the day one year at a time, looking back to each of the 50 seasons of AMA Pro Motocross.

After a tumultuous end to the 1982 season, in which Team Honda saw two different champions injured and out of action altogether—AMA Supercross and 250 Pro Motocross #1 Donnie Hansen and 500cc Pro Motocross #1 Darrell Shultz—they had to reload quickly. So they turned to the veteran Bob “Hurricane” Hannah, who’s time at Yamaha (1976-1982) had run its course. Hannah still had world-class talent, but he was also dealing with some of his own nagging injuries. Fortunately for Honda, they had a couple of worthy future superstars already in the pipeline: David Bailey and Johnny O'Mara.

The 1983 season was going to bring something different to the table. Wrangler Jeans wanted to do something unique with their new interest in the sport, and the AMA set up a Grand National Champion concept where they would take each rider’s points from AMA Supercross and combine it with whatever amount of points they scored in their chosen outdoor class: 125, 250, or 500. They also decided to make the whole outdoor series triple-class rounds where every rider would be on hand for every round, though the talent would be spread out in three different classes at each of the 11-round series. The rider with the most points for 1983 would be named the Wrangler Grand National Champion.

It all started with the Anaheim Supercross opener, and for the second year in a row a Honda factory rider would win his first career SX on the first night of the season. David Bailey, dubbed “the Little Professor” as his stepdad Gary Bailey was “The Professor” held off his best friend and teammate O’Mara to take Anaheim. Hannah was fourth in his Honda debut, but then quickly got up to speed, sweeping the Seattle doubleheader at the old Kingdome and surging into the points lead.

Next, it was Suzuki’s Mark “the Bomber” Barnett who got hot, winning a muddy Atlanta SX in the old Fulton County Stadium. Hannah rebounded at the next round at Daytona, leading a 1-2-3 sweep with Bailey and O’Mara in tow.

But just as it seemed that Hannah was about to take off with not only the AMA Supercross title but the new Wrangler GNC #1, he injured his wrist on press day at the Orlando Supercross and effectively gave away a big points lead. The winner that night? Sixteen-year-old Ron Lechien, who technically became the youngest premier-class AMA Supercross winner ever, though history will always regards the even younger Marty Tripes’ win at the ’72 Superbowl of Motocross as the youngest winner ever.

Hannah’s injury opened up the 250 Pro Motocross title chase wide open, as Hannah was leading there as well before Orlando (SX and MX overlapped back then). Bob had won the first two on the trot, but he got sick before the third round at Gatorback Cycle Park and didn’t score a point. His teammate Bailey was right there to pick up the slack.

In the 500 class, Honda’s Danny “Magoo” Chandler and then the veteran Kent Howerton started out as the big winners, but as time when on the younger Broc Glover emerged as the fastest man. He won as many races as everyone else put together in notching yet another title for Yamaha in his prolific career.

Meanwhile, in the 125 class, Mark Barnett was at war with a whole squadron of fast and ambitious men. The three-time champion for Team Suzuki had to deal with the likes of O’Mara, Kawasaki’s Jeff Ward, and Yamaha’s 16-year-old wunderkind Ron Lechien. Barnett found the going here just as tough as he did in what became a duel with David Bailey for the AMA Supercross title. All four riders would win rounds, but in the end, O’Mara got the edge on Barnett, but just barely.

So the ’83 season really came down to the fight between Bailey and Barnett for not only the AMA Supercross crown but the Wrangler Grand National Champion crown as well. The SX title was there for the taking for Barnett, the ’81 champion, but then at the next-to-last round at Foxborough in New England, his Suzuki’s gear box went out and he failed to even qualify! That pretty much handed Bailey all he needed to take the ’83 SX title.

And at the very last motocross event, the Spring Creek National in Minnesota, everything went David Bailey’s way. First, the dynamic Lechien put on a ride for the ages to take points in both 125 motos away from Barnett, giving Bailey the opening he needed. But he had to win the last 250 moto over his teammate Bob Hannah to give him the points he needed. With two laps to go, out of view from almost everyone, Hannah surrendered the lead to Bailey. Just like that, Bailey was not only the AMA Supercross and 250 Pro Motocross titles, he earned the first AMA/Wrangler Grand National Championship as well. Besides a big cash bonus, Bailey would be given the distinction of wearing the first blue plate with gold #1 ever handed out in the sport. It would not be his last.