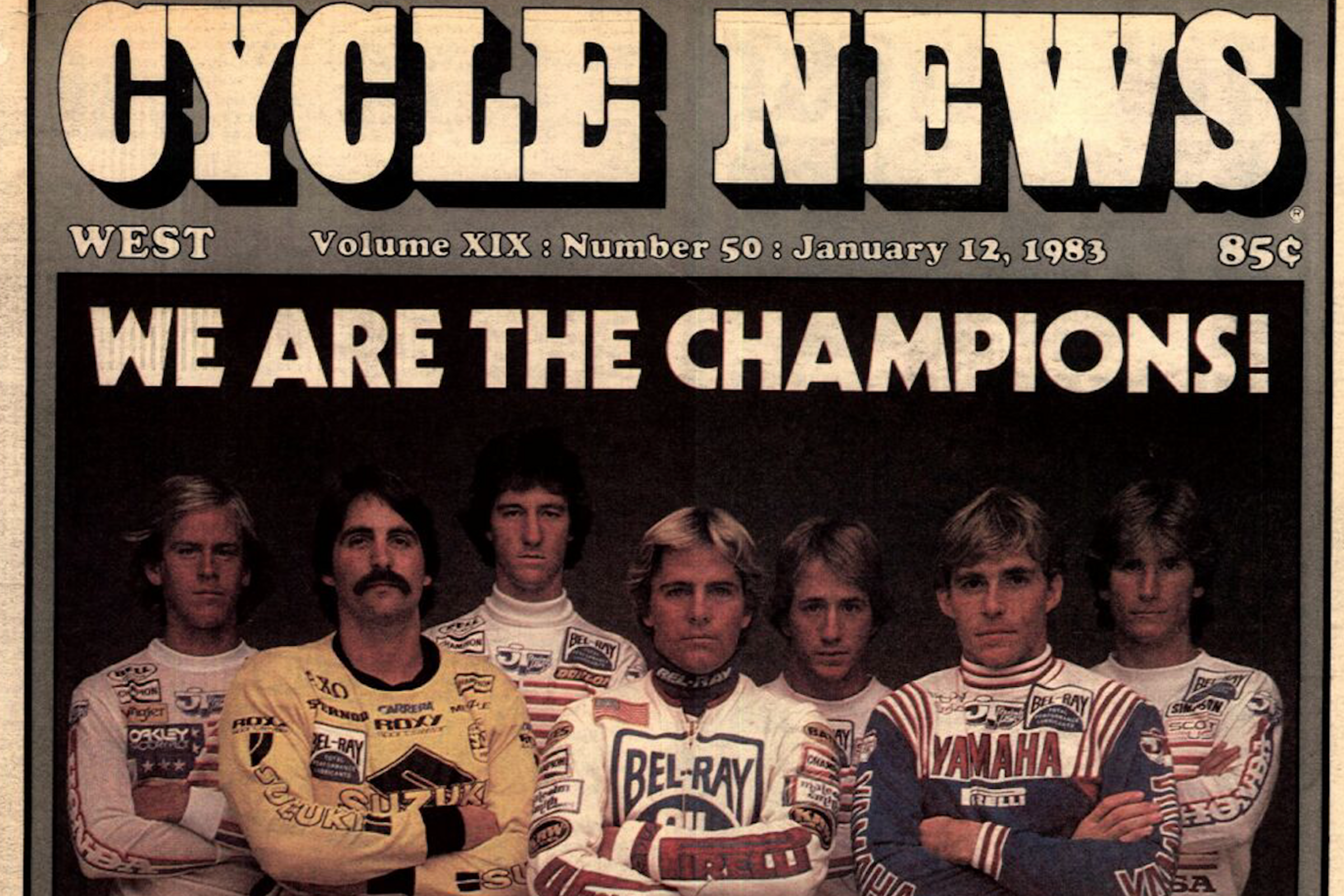 We are starting into the second decade of our MAVTV+ Countdown to the start of the 2022 Lucas Oil AMA Pro Motocross Championship. We’ve made it to 1982, a remarkable year for American motocross. Building on the successes of the previous year’s Team USA effort at the FIM Motocross and Trophee des Nations races, the overall confidence and competitiveness of the Americans could be felt at many levels—and on both sides of the Atlantic Ocean. In Europe, “Bad” Brad Lackey, the first AMA 500cc National Champion back in 1972, would finally win the FIM 500cc World Championship aboard a Suzuki. And then another American ex-pat, Yamaha’s new hire Danny Laporte, won the 250cc World Championship. Lackey was the first American to win a world motocross title; LaPorte was the second, just two weeks later.

Meanwhile back in the U.S. the domestic season kicked off with Team Honda’s Donnie Hansen, one of the four heroes of the ’81 Team USA squad, winning his first AMA Supercross at the Anaheim opener, and then would manage his stadium season in a steady, consistent way, earning his first AMA Supercross Championship, as well as Team Honda’s first. Hansen’s win came at the expense of defending champion Mark Barnett of the Suzuki team, who finished second behind Hansen in the final rankings.

Hansen would carry his momentum over into the 250 Nationals, but there he found an unlikely threat in 17-year-old Ricky Johnson of the Yamaha team. Riding a production YZ250 against Hansen’s works Honda, Johnson put up a great fight in the eight-race series and almost had the title in hand, only to collapse his front wheel at the last round in Colorado on a huge downhill jump on the CDR Tech Track at Castle Rock. It was enough for Hansen to steal the title with three points to spare.

In the 125 class Barnett again took the championship, giving him three straight, tying him with Broc Glover for the most 125 titles in a row. Finishing second overall was Team Honda’s Johnny O’Mara.

And in the 500 class Darrell Shultz, the newest member of Team Honda, gutted out the championship after suffering a late-season spat of injuries that included a badly damaged knee, broken ribs, and a punctured lung. Shultz was so beat up when the season ended that he could not participate in the Team USA effort that American Honda and Roger De Coster were putting together for that September. As a matter of fact, Shultz would never race professionally again. The only time he got to wear his #1 plate for the ’82 500cc title was when he rode for Honda’s brochure shoot for their ’83 models.

Shultz wasn’t the only one not to defend his title in ’83, as Donnie Hansen would get injured while in Germany getting ready for the MX and Trophee races. He suffered a severe concussion that would prevent him from ever racing professionally again. In one remarkable year’s time he had won the ’81 MX and Trophee des Nations, the ’82 AMA Supercross and 250 Pro Motocross titles, and the Swedish 250 GP.

With both Shultz and Hansen unable to compete, Team USA would now turn to other Team Honda riders to try to defend their ’81 wins. De Coster would turn again to O’Mara, who had won the 125cc Grand Prix of Switzerland on an off-weekend from the 125 Nationals, as well as Jim Gibson and Danny “Magoo” Chandler, winner of the 500cc USGP at Carlsbad, as well as a couple of 500 Nationals. And to replace the injured Hansen, they called up David Bailey, a budding superstar in his own right.

What happened in Germany and Switzerland was every bit as remarkable as what had happened the previous year. The Americans won again, but in spectacular fashion as Chandler, previously known as a wild man on a motorcycle, put in the four best motos of his life to become the one and only rider in motocross history to sweep all four motos of the Motocross and Trophee des Nations.

Adding up all of the success that Americans had across the board in 1982, Cycle News named the four Team USA members, as well as world champions Lackey and LaPorte, plus World Speedway Champion Bruce Penhall, all Riders of the Year. Ironically, double-champion Donnie Hansen and 500 National Champion Darrell Shultz were left out of the equation after their late-season injuries.