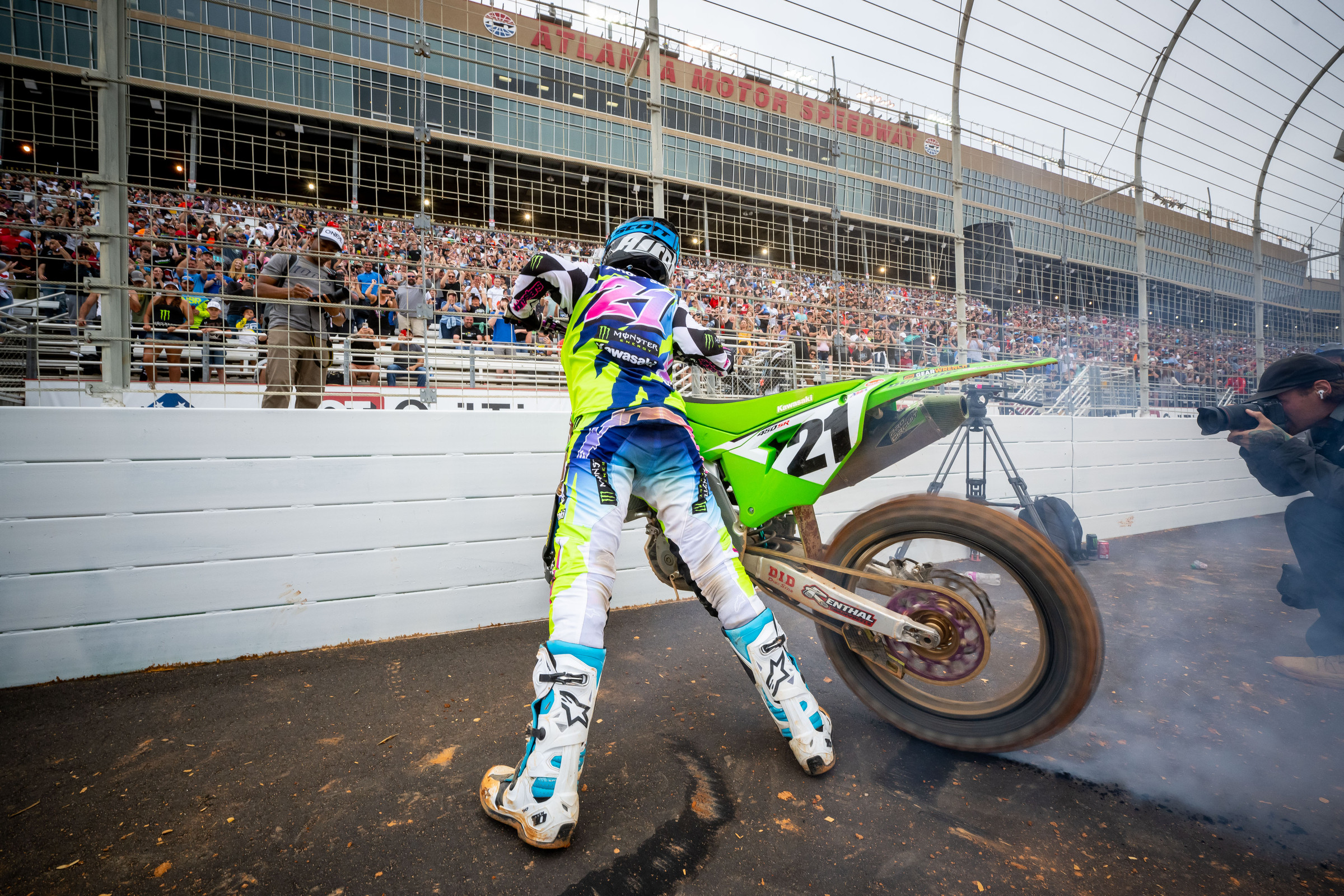 Following his switch to Kawasaki, New Mexico native Jason Anderson seemed rejuvenated as he fought close for the title with Eli Tomac in the early rounds of the 450SX championship. However, two rough back-to-back races in Florida (Daytona) and Michigan (Detroit), were a tough blow to his championship hopes. Anderson did not miss a race as he returned to finish sixth in Indiana, but his 9-21-6 finishes to Tomac’s 1-1-1, in the midst of a five-race win streak, really left Anderson with a hole in the standings.

When Chase Sexton tipped over early in the main event at the 14th round at Atlanta Motor Speedway, Anderson quickly inherited the lead and took off. He led the final 13 laps of the main event to take his fourth win of 2022 and his 11th career 450SX main event win. While Eli Tomac, Sexton, and Cooper Webb, respectively, would come through the finish line within seven seconds of Anderson, the #21 was not contested for the win. Unfortunately for Anderson, the win might have been too little too late as Tomac leaves round 14 with a 53-point lead with only 78 points available in the final three rounds. After the race, all three podium finishers talked to the media in the post-race press conference.

Jason, you had some wins earlier in the season. Right there back and forth, getting a win almost every other weekend, then had a rough patch. What was that like for you? How did you process that last month and a half where the speed was there, but there were just mistakes along the way? How did you fight through that and regroup and get the big one here today?
Jason Anderson: It’s like I had everything going for me there for a little bit and then once we got to Daytona, it kind of fell apart. It was frustrating because it was just situations that shouldn’t be happening. It’s just reading the race and managing it a little bit better. It’s tough to keep pushing and trying whenever it seems like nothing is going right there for a second. To get this win is good. Last weekend I was kind of bummed because the off-weekend, I feel like I made some good progress. Had a little bit of a cold last weekend, and then this weekend felt better but you still kind of doubt yourself a little bit. To be able to get that win feels really good.

How was the track today? It obviously had its changes, but mid-main event there when it was most important, what was it like for you?
It wasn’t too terrible. It was really slick in practice. The whoops, they were kind of cupped, but they weren't actually too terrible and not too sketchy. But it kept you on your toes. The high-speediness of the track is kind of intimidated, especially yesterday when you saw all those huge jumps and stuff like that. Thankfully they tamed it down a little bit. It’s kind of an intimidating track because Daytona I don't think is as big. I think it’s a little more sandy so it keeps the pace down a little bit, but this Georgia clay is a little bit more high-speed. But it’s good. Good track.

From your Twitter comments yesterday, you didn’t seem to like the track, but I feel like it came around quite a bit. It made for some good racing. Did it change your opinion? I know you just said it was a good track, but did it change your opinion from yesterday?
Yeah. To be honest, right now I believe that 80 percent of the 450 class is out with injury. Then I think 120-foot triple, I understand they want shock value for the fans to be like, longest start straight, longest triple, but at the end of the day, we’re four rounds away from the end. Let us get through the season. Have good racing. We’re all going to have to hit the triple, but it’s going to rain too and we’re all still going to try and hit the triple. Luckily, the track ended up good. I just think the shock value that they’re trying to get out of some of the obstacles they put in is a little bit too much for us racers and our safety. But at the same time, I understand where their head is at, but us as racers, we’re humans and we want to stay safe. We want to limit the risk. We know the risk that we take, and when they make it a little bit bigger and we don’t really have control over that, it’s a little bit frustrating for me, personally. I hate to be the Karen, but at the same time, I feel like someone needs to speak. If something happened to me on one of those jumps, I’d be frustrated if I didn’t say anything.

Eli and Jason, I want to go back to the heat race battle you guys had. I just looked like a lot of fun, the two of you going back and forth a little bit. Take me through that, and also that bit of a scary moment as you came out from under the over-under bridge.
Eli Tomac: Yeah, we had a good battle. I initially was going on that left side in the sand and was making up time there. Then finally I was able to get close to his wheel in that turn and then made the run up the left side. Then we’d go off the triple. I just left the door open again in the sweeper. So, that was that. Then the white flag came around and I tried to do the same sort of move he did to me and I was a little bit too far back and slid out. That heat race was a good push.

Historically, Atlanta has some of the biggest crowds in the stadiums, 70,000 people historically over the years. Would you rather have been in the stadium years past, or are you guys happy with this wider open, taking a chance with the weather? Which one would you guys prefer?
Tomac: If they keep the 120-foot triples out, the speedway track is all right. This one is gnarly. To me, I don't know if they’re just trying to out-do Daytona or something, but I don't think we need that. I think build a normal track and we’ll make the racing the way we do and we’ll battle well. We don’t need the gnarly obstacles. Honestly, I like the bigger tracks, the higher-speed tracks. So, I would rather have this one than indoor Atlanta.

Anderson: For me, I actually ride good here, but I don't know if I like it as much as I like racing in the Georgia Dome and stuff like that. I feel like that stadium in Atlanta and the supercross in Atlanta in the stadiums in the city are so nostalgic a little bit, with all the battling and stuff that has gone on inside there. I like this one, but I really liked racing in the stadium, too. All in all, if you keep the track normal, like Eli said, I think the racing is good here. And the fans were here, so it was pretty cool.

Chase Sexton: For me, I never got to race the 450 class inside whatever the stadium was last time, but I did race 250 there. I liked it. Out here, I think it’s good because we get more dirt and obviously the jumps I think are a little bit peakier. For me, I think it’s a little bit technical. Not that the ones inside aren’t, but this one definitely is a risk versus reward kind of track. It has suited me the last couple years, but I just think more dirt, the jumps are… Not like the triple yesterday, but the rhythms sections and stuff like that, the whoops are good usually. The dirt is good here. So, I probably prefer it here.

You seem like you’ve got the Kawasaki figured out, but is there stuff that you’re still learning about the bike this late in the season? Can you also talk about Broc Tickle’s influence on the bike with setup and also just his coaching?
Anderson: For me, I rode a steel frame for eight years, so there are still some times where it catches me off guard. I think that’s a lot of my mistakes this year. Even though I’ve been having success on it, I still feel like there’s some times where I don’t read the way it works. Obviously, we have Broc and I think the team has been working really well with being a little bit more open-minded. I think Broc is a good influence because he’s very smart. He’s awesome. The cool thing about training with him is he’s obviously one of my friends. We trained together with Aldon back in the day. So, we bounce ideas off of each other. It’s not like we’re doing anything crazy. Everyone does basically the same thing to get ready, but Broc understands it a little bit more just being in it. So, it’s cool having him on my side.

A rough couple of weeks there. Hadn't had a win in a while. How satisfactory is it to keep on digging and then get this? It seemed also with the crowd right there that you were extra excited when you came across the finish.
Like I said, at any point right now, any win I’m damn excited to go out there and get a W. It feels good, especially after having a little bit of chaos go on. It just seems sometimes like you can’t see the light at the end of the tunnel and break through and be able to get a win and ride well. It gives you that motivation to keep going. It’s tough whenever you keep getting beat down a little bit. Everyone in our sport understands that. It’s tough to keep going, but it’s just part of it. It’s the nature of the beast, but for some reason, as stressful as it is, we keep coming back for more. It’s pretty awesome.