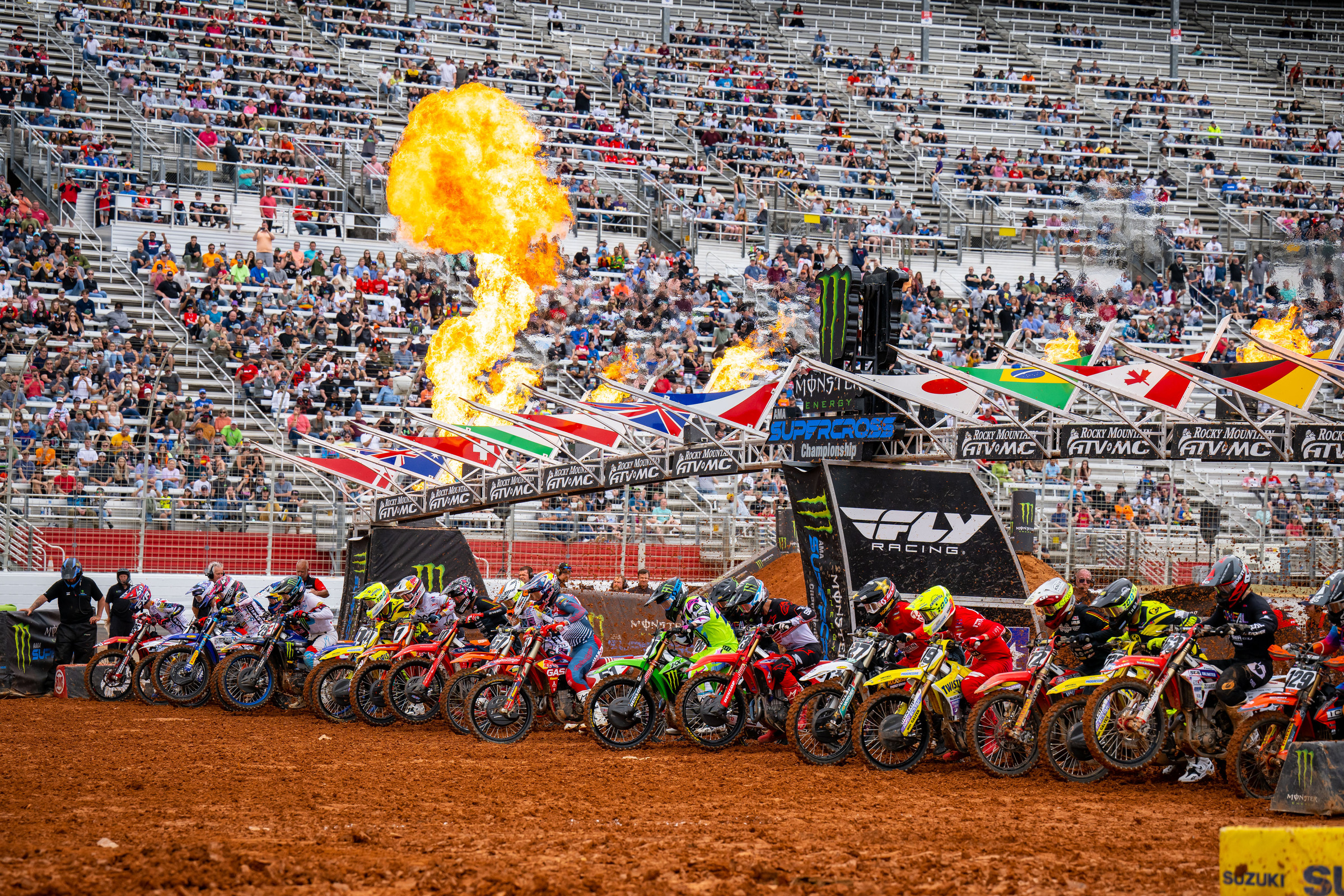 On one side, this 2022 Monster Energy AMA Supercross Championship is headlined by big points leads in each class, but on the other end it still offers up unpredictable racing. This is proven by round 14 at the massive Atlanta Motor Speedway, where the much-hyped 250SX East/West Showdown didn’t generate a win for either series’ leader, and then the 450 class saw a pair of riders bounce back to early-season form. In the end Hunter Lawrence, not the 250SX series’ leaders Jett Lawrence and Christian Craig, won the 250 race, and Jason Anderson emerged with his first 450SX win since Minneapolis six rounds ago. The points leaders of the classes, including 450SX leader Eli Tomac, were relegated to podium duty.

“Like I’ve said I’ll celebrate any win I get these days,” said the Anderson, of Monster Energy Kawasaki. “It feels good, especially with some of the chaos that has been going on, it gets hard to see the light at the end of the tunnel. It’s good to break through, get a win and ride well. It gives you the motivation to get going.”

This round 14 felt like a trip back to round three, as Anderson had to battle Honda HRC’s Chase Sexton for the win. Sexton has taken a ton of big crashes since his victory way back then, but he’s found his form again and some more comfort on his CRF450R. Sexton was crazy fast all day, topping qualifying and winning his heat race. In the main event, he was pulling away from Anderson and everyone else before he washed the front tire and went down. While “Sexton was fast enough to win but crashed” has been a constant theme this year, he wasn’t as bummed about this one as others, because the speed and comfort still marked a big step from the way he felt a few weeks ago.

“Yeah confidence definitely took a hit,” said Sexton. “I would have a decent race and then a bad one, seemed like I couldn’t get any momentum going. Then Honda came down and did some testing and we found something, and then as soon as we did that my riding was back to where we were in the beginning of supercross. I’m excited for that and I want to finish these three races strong.”

Sexton’s crash made life easier on Anderson, but left a big battle for the rest of the podium spots. Tomac had a weird first few laps, losing spots to Anderson, Cooper Webb and more on the second lap. It looked like something was wrong, but the points leader just said he had a few “lousy laps” and missed some rhythms. He eventually put it back together and recovered, getting Webb and then holding off Sexton’s hard charge to the finish. That’s the way this season has gone for Tomac. When he’s on, he’s unstoppable, and even when he has a few lousy laps, others make too many mistakes to take full advantage. The result is Tomac could potentially wrap the title this weekend in Foxborough with three races remaining in the series.

“I don't know if I missed a couple rhythm lanes that lap, or at least one, and then I got passed, I believe by Malcolm [Stewart] for a second,” said Tomac. “My first couple laps were super lousy. That’s the only way I can put it. Then the front guys got away. Jason got away. Chase got away. Then I came alive a little bit at the end, but it was way too late.”

Webb missed the last race of the series with injury but came back at Atlanta, he was in the mix but Tomac and Sexton were better and pushed him back to fourth.

“It was a crazy race – a good battle for the lead and we were all going for it,” he said. “I had a couple crashes but it felt really good to be back in the mix. I missed last week and just been struggling all season but man it felt great to just get back in it. I haven’t really gone that speed since probably last year, so I’m pretty happy. I have to give it up to the team, I had a big crash last week and they came down to Florida and we figured some stuff out. We’ll just keep going for podiums, and hopefully get the first win of the season – there are three races left and we’ll see what happens!”

Malcolm Stewart was banged up after his crash last weekend, he was with the Tomac/Sexton/Webb/Justin Barcia group early but settled for fifth.

“The day was actually pretty good, even though it was a short day,” Stewart said. “I feel like I rode pretty good in the main. I had a decent start and I kind of just made some things happen and we ended up fifth. I do feel like there was a lot more left in the tank but honestly, I’m happy to re-bound myself after the crash last weekend. I know it’s just a top-five but it’s something to build off of and I’m stoked to just be back racing again and we’ll be ready for next weekend.”

Justin Barcia actually nailed the start in the race but had a crash and a few more close calls, pushing him back to sixth.

“It was a pretty crazy day with a different schedule and only having one practice,” said Barcia. “I ended up qualifying P6, which was not a bad place since the track was pretty slippery and kind of wild and one-lined. I wasn’t particularly stoked on my heat-race finish but I got through it and did some bike changes for the main and ripped an awesome hole shot, it felt so good! Unfortunately, I had a few mistakes, went down and just didn’t ride that well, so it was definitely a tough night but I’m a tough SOB and I’m going to go back to Cali, work hard this week and come out swinging at the next round!”

The top six traded places early in the race, and it was fun to watch. Justin Brayton was all by himself for most of the race in seventh, ahead of Kyle Chisholm and Brandon Hartranft in eighth and ninth.

Last week’s race winner, Marvin Musquin, crashed early and went back to last place, he also had an off-track excursion coming through the pack. He ended up tenth.

“It was just a weird day, I was a little off physically and unfortunately, it showed on the riding,” said Musquin. “I was ready to go for the main – I didn’t get a good jump but my position off the start allowed me to push it wide and I had an okay start but going into the end of the tunnel I caught that bank/edge with my rear wheel and it kicked me and I did a 180 [degree turn]. My right-hand glove came off in the crash and my bike was twisted a bit but it took me a couple turns to get used to it and I came back to 10th. I’m a little bit disappointed, obviously, but that’s all I could get today.”

The 250s were the star of the show, though, with the East and West divisions facing off the first time this year. The hype was there for points leaders Jett Lawrence and Craig, but Hunter Lawrence out did them both. Craig got a terrible start while Jo Shimoda snuck inside of Hunter Lawrence to take the early lead. Jett made some moves to get toward the front but tucked the front end in a corner and went down. Hunter made a move on Shimoda and got away, but then Craig arrived on the scene to get around Shimoda and take over second. The second half of the race became a lap time battle between Hunter and Craig, the lead hovering around 1.5 seconds, and the two pushing the pace but mostly matching each other’s times. Then Craig tucked the front and crashed, and that was all Hunter needed to bring it home. That’s actually his second win in a row (dating back to the last West race in Seattle) and third this season. He didn’t want to put too fine of a point on winning the race most stacked with talent, though.

“[It feels] Really good,” said Hunter. “Any time you win is cool, so East/West is really good. Everyone is hearing about the East/West deal, who’s going to win, this and that? But, I feel like it's the same for any opening round or any race after some controversy or whatever. It’s always like that. So, it’s not really anything new that you have to change your approach and stuff. We just come here to race. That’s just what I did. Got a good start and went from there.”

Craig had to settle for second, but what really mattered to him wasn’t finishing ahead of East leader Jett Lawrence, but behind Hunter, who is still mathematically in the points race with Craig in West.

“A few years ago it probably would have [cared about the battle with Jett Lawrence], but this year I’m in a different head space,” said Craig. “I’m just very calm and believe in myself and my ability. So, if it happened, it happened. If not, I got to worry more about Hunter and where he’s at on the track. We had a good race there. It was fun. Other than that, it was a cool little showdown we had. Obviously the hype throughout the whole week was me and Jett, but Hunter slid in there for the win.”

Jett Lawrence’s come back from his crash included last race duels with Shimoda and Austin Forkner, who looked solid in his return from injury. Jett made some passes, getting by Forkner in the whoops, and the emerging ahead in a cat-and-mouse battle with Shimoda to take third. He had also gone down in the first turn of his heat race.

“Sucked that both happened, but it is what it is,” he said. “That’s what the biggest thing was today, the traction deal because obviously it was pretty muddy in the only qualifiers. So, it was kind of just seeing what the traction is going to be like, when is it going to be tacky and grippy. I found out in most spots that it wasn’t tacky at all. It is what it is. You can’t really just sit there and complain and throw your hands up. You’ve got to get back on your bike, put your head down, bum up, and keep on charging.”

Shimoda was fourth, unable to hold off the top three after his holeshot, but still looking better than he did a few weeks ago in Seattle. Nate Thrasher, who won two races at Atlanta Motor Speedway last year, was fifth. Michael Mosiman had a crash while up front and took sixth. Forkner was seventh in his return from a collarbone injury, but also punctuated his return with a spectacular 19th-to-first comeback win in the 250SX East heat race. RJ Hamsphire crashed early while battling Hunter Lawrence for second, he took eighth. Mitchel Oldenburg and Pierce Brown rounded out the top ten.