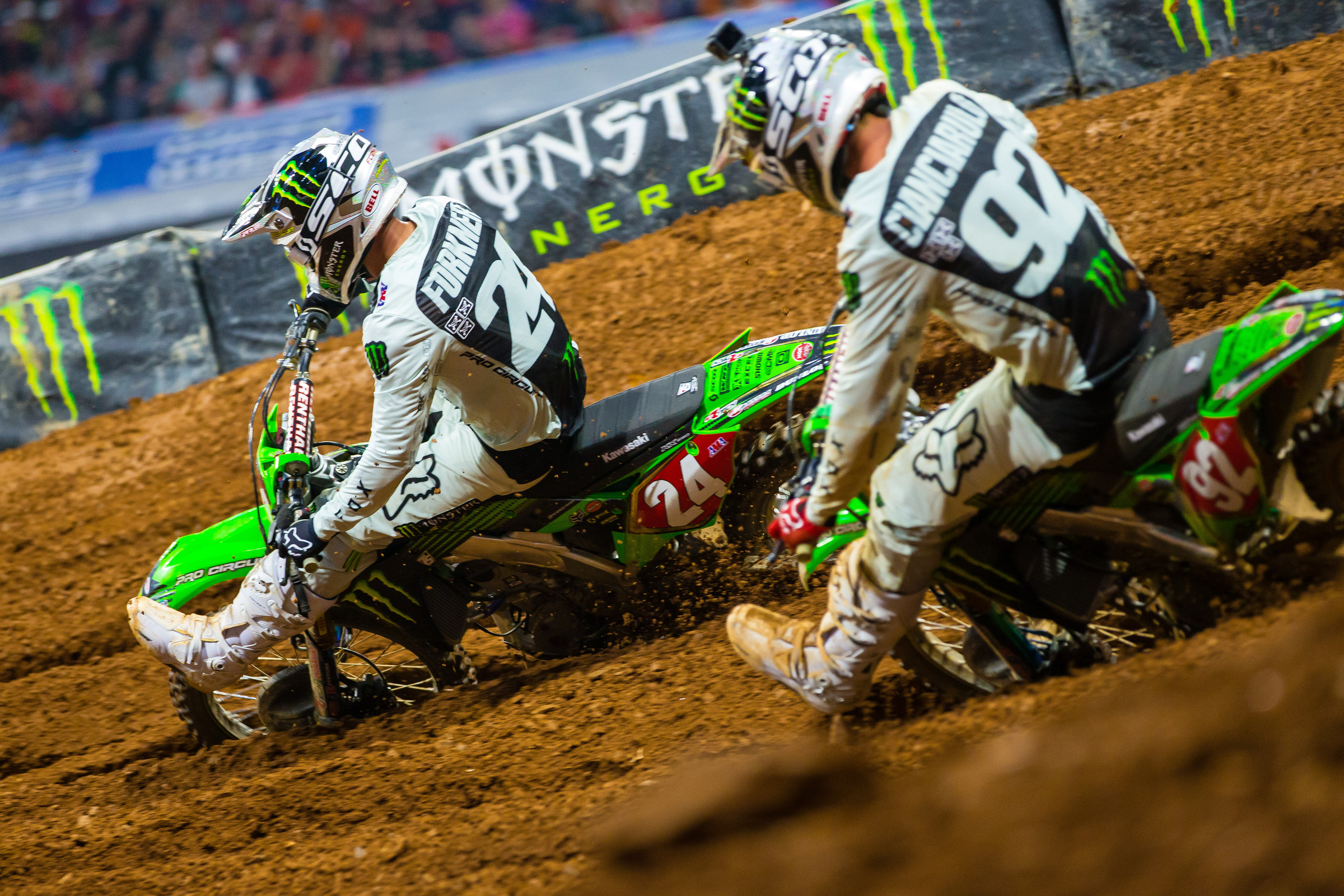 The East/West Showdowns are a debated topic off the track. Back in the day the East/West didn't count for points, so there are some big wins that don't always show up in the record book. They were just for bragging rights. These days they count for points and everything else, and one thing that is not debated is every 250SX rider enters into the all-inclusive race wanting to best not their respective region, but the other region as well. Starting in 2018, the Monster Energy AMA Supercross finale would continue to be the Dave Coombs Sr. East/West Showdown, but there would also be a mid-season East/West Showdown throw into the schedule as well.

So, how did the main event go? Well, to start this showdown main event, both points leaders started together dead last! Osborne and Plessinger were both on the inside of the left-hand first turn and got caught up in a Tuff Block that Cianciarulo clipped. Martin grabbed the holeshot and race lead as he looked to make up some ground on 250SX East Region points leader Osborne as the #1E had to fight through the field. Savatgy looked to benefit from Osborne’s poor start as well, but he tipped over going through the first turn on one of the early laps, which costs him several positions.

Osborne soon caught up to and passed Savatgy as he continued to click off position after position. The Husqvarna rider eventually got up to seventh by the checkered flag.

As for the West Region points leader, Plessinger made it way up to fifth by the finish, but he did not lose much ground in the championship because Cianciarulo was the only West Region rider that finished ahead of the #23.

Martin clicked off lap after lap out front, taking the checkered flag and the win, but would be penalized seven points for jumping on a red cross flag. In 2016, Ryan Dungey jumped on a red cross flag in a main event and went on to win the race but was penalized two positions late in the night when most of the dust had settled. Second-place finisher Jason Anderson was officially given the win, which prompted a rule change following that season. The new rule stated that if a race winner jumped on a red cross flag, the American Motorcyclist Association (AMA) would not take away wins but instead would penalize riders with lose of championship points. So, this situation with Martin was the first occurrence since the rule change where the race winner would keep the win but would be penalized championship points instead. Behind Martin was Luke Renzland, who was passed by Cianciarulo for the runner-up spot late in the race. However, Renzland’s career best was his maiden and only podium finish of his supercross career.

You can watch the main event highlights from AC’s GoPro video below:

So how did the points look following the showdown? Plessinger (fifth in the showdown) went from entering the night with a four-point advantage over Savatgy (tenth in the showdown) to a nine-point advantage over the Kawasaki rider following the showdown. With Osborne finishing one spot behind sixth place Forkner, the defending East Region champion lost a single point to his main title rival on the night. While bother series leaders started the points-paying race dead last, neither championship saw a massive turn in points like it appeared might have been the case early. Both Plessinger and Osborne would go on to win their respective titles that year, before moving to the premier class full-time starting in 2019.

Check out the main event highlights below.

The following season, the East/West Showdown took place at the new home of the Atlanta Falcons: Mercedes-Benz Stadium. Leading into the mid-season showdown in 2019, the year was a lot different than the previous as the Monster Energy/Pro Circuit Kawasaki team had taken three of the first five 250SX West Region main event wins with Adam Cianciarulo and all three of the first 250SX East Region main event wins with Austin Forkner. So essentially, six of the first eight main events had been won by the AC-Forkner duo and it seemed the team was destined for rather dominating championships in both regions in the same year.

In the West Region, Cianciarulo (114 points) lead Shane McElrath (106) by eight points; Anaheim 1 winner Colt Nichols (104) by ten points; and Dylan Ferrandis (102) by 12 points as fifth-place RJ Hampshire (75) sat over a full race down. In the East Region, Forkner’s three-for-three to start the season left him with a 13-point advantage over Jordon Smith, who had a pair of seconds, as Justin Cooper and Chase Sexton sat within five points of Smith.

Ferrandis’ 47.963 topped both the West Region and Justin Cooper’s 47.978 on the East Region. McElrath went on to claim the West Region heat race ahead of Nichols, Cianciarulo, and Michael Mosiman, as Ferrandis, Hampshire, and supercross rookie Garrett Marchbanks finished seventh, eighth, and ninth, respectively, and Cameron McAdoo was forced to the LCQ after finishing tenth. Forkner claimed the East Region heat race win ahead of Sexton and main championship contenders Cooper and Smith finished fifth and sixth, respectively.

When the gate dropped on the main event showdown, all of the major contenders were there off the start: Forkner, Cianciarulo, Cooper, Sexton, and Ferrandis were all within the top five off the start. Forkner had the inside as his and Cianciarulo’s line on the outside varied in the first rhythm section. Cianciarulo made a mistake that allowed Sexton to sneak up into second, as Brandon Hartranft block passed the #92 in the second turn to move into third. Smith would make a costly mistake that put him outside the top 15 early in the race and he eventually finished 18th. Cianciarulo and Ferrandis would get around Hartranft and close in on Sexton as Forkner clicked off lap after lap out front.

Forkner led the first 11 laps of the race before Cianciarulo used the same jumping line he used on Sexton on his teammate to take over the lead with a clean block pass in the turn that followed. Ferrandis followed through as he too passed Forkner in the whoops.

Cianciarulo would go on to lead the final nine laps before taking the checkered flag. With his win, Cianciarulo became the first rider to earn three career East/West Showdown main event wins, after previously winning both the 2017 and 2018 Las Vegas Supercross Dave Coombs Sr. East/West Showdowns.

Check out the main event highlights below.

And as we all know, the Dave Coombs Sr. East/West Showdown at the 2019 Las Vegas finale ended up being a factor in the championship, as Cianciarulo would crash while essentially having one hand on the West Region title, leaving the door open for race winner Ferrandis to claim the title instead.

The real difference in this year’s mid-season showdown is the facility. The all-inclusive round will take place at NASCAR’s Atlanta Motor Speedway, which could mix up the results of a typical race alone (think Daytona Supercross), especially it being a showdown.

Eyes will be on the top riders in each championship (Christian Craig, Hunter Lawrence, Michael Mosiman, Vince Friese, and Jo Shimoda in the West and Jett Lawrence and RJ Hampshire in the East) but remember, there could be other riders who find themselves up with the front group. Nate Thrasher won two out of the three 250SX West Region races at this very facility in 2021 so you know the #49 would like to back up those strong rides. Garrett Marchbanks won the 2020 250SX Daytona Supercross and could very well fight for a podium spot on this taxing track. Pierce Brown had some bad luck in Missouri but is bound for a breakout ride. Plus, Brown has done well at Daytona, so add his name into the mix. Austin Forkner is back this weekend following a broken collarbone early in the East Region Championship and still has the most career wins of any active rider in 250SX.

Cameron McAdoo suffered a shoulder injury at the St. Louis Supercross press day and the injury will keep him sidelined for this weekend as well. McAdoo still sits second in points, ahead of Hampshire, but that will change as only seven points separate the two. Hampshire, down 41 points to Jettson after St. Louis, needs to keep the gap under 52 points by the end of the main event on Saturday if he wants to mathematically stay alive in the championship. If Jett is able to gain 11 points or more on Hampshire on Saturday, he would officially clinch the East Region title two rounds early. Hampshire is coming off his maiden supercross win and is hungry for more, so it is more than likely the #18 will have to wait to celebrate the title until another weekend.

Also of note is that Christian Craig does have a slim chance at clinching the 250SX West Championship this weekend as well. Hunter Lawrence just crashed on press day but appears to be good to go for tomorrow. That being said, if Lawrence doesn't score points tomorrow and Craig wins the showdown, he would have exactly a 52-point advantage and the tiebreaker on wins over Lawrence specifically. However, he currently has a 30-point lead on Michael Mosiman in third and would need to outscore Mosiman by 22 points as well which would be a 19th place finish or worse for Mosiman. A wild set of circumstances would need to occur, but the possibility of clinching is at least in play for Craig.

Remember, 250SX graduate Cianciarulo is the only rider to ever earn three East/West Showdown wins. There are six riders who have two East/West Showdown wins to their name: Jett Lawrence could become the seventh. The young Australian got the win at the 2021 final showdown and was joined by hist brother on the podium. Could the brothers repeat that performance tomorrow?

J-Mart, the only other active rider in the 250SX Class that has won an East/West Showdown aside from Jett Lawrence, will not be on the track this weekend as he is out for the remainder of supercross with a shoulder injury. So, any rider not named Jett Lawrence would earn their first East/West Showdown with a win on Saturday afternoon.

And one more factor might come into play this weekend: weather. The forecast does show some rain, so if we do see a muddy raceway tomorrow, it could shake up the championships more than a typical race. We will find out tomorrow which coast is the best, and what impact the double-stacked field will have in points.