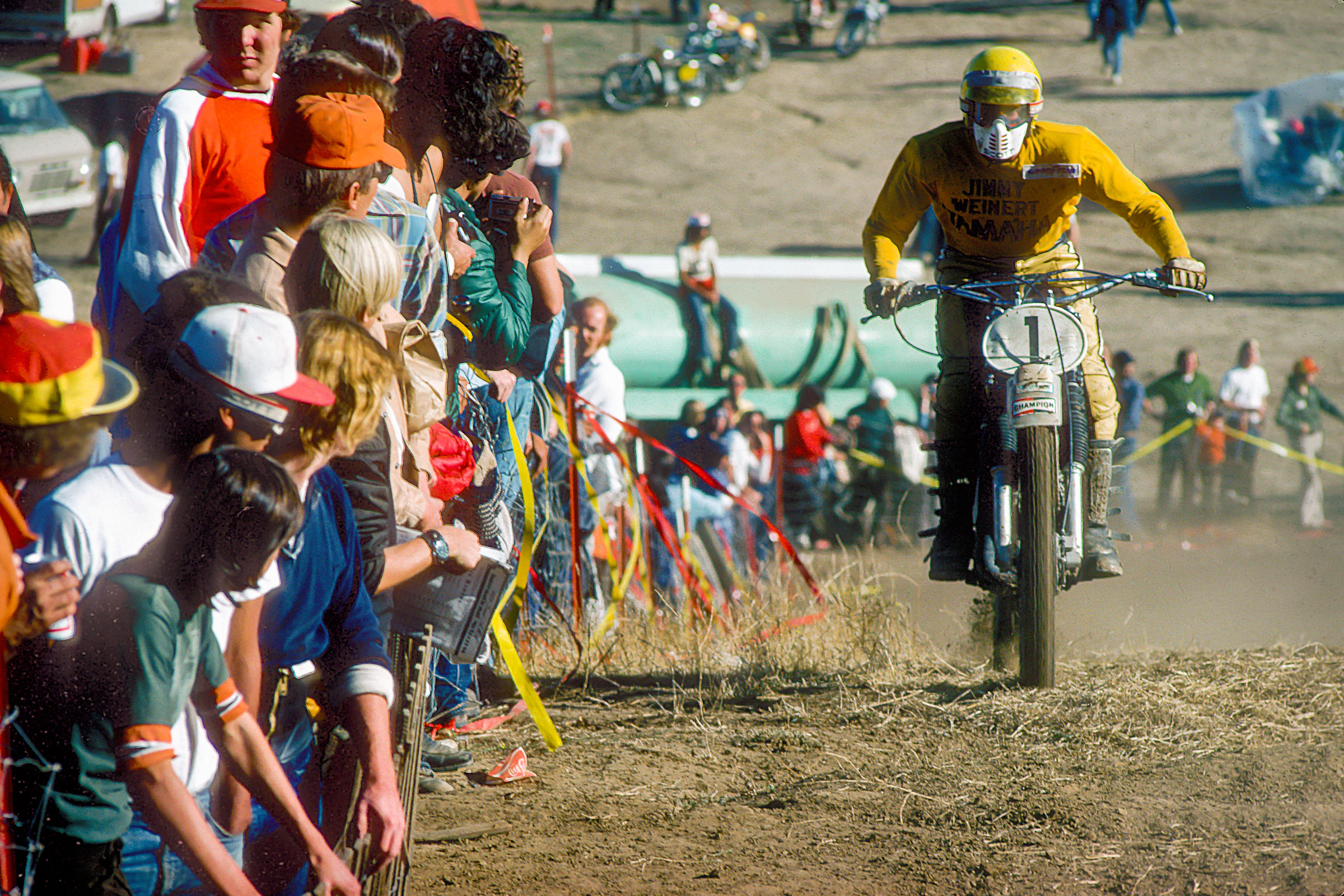 Welcome to Day 47 in our MAVTV+ 50-Day Countdown to the start of the 2022 Lucas Oil AMA Pro Motocross Championship, where we will be celebrating its 50 years in existence. We’re on to 1975 and the year that the landscape of American motocross really began to change. The Trans-AMA Series was still humming—Roger De Coster would win it again that fall—but the summer Inter-Am tour that got the whole sport of professional motocross started was on its last legs. By ’75 it would be down to a four-race series, with only one European—Czech rider Zdenek Velky—riding the whole tour. Even the star power of Marty Smith in the 125 Nationals that ran alongside three of the Inter-Ams was enough to keep it afloat. Tony DiStefano ended up winning three of the four rounds and the title, the first time Suzuki had won the series. Sadly, Edison Dye’s Inter-Am tour would run from 1967 to ’75 and then shut down for good. The championship trophy for the 450 class in Lucas Oil Pro Motocross is called the Edison Dye Cup in honor of the late promoting pioneer’s contributions to the sport.

What was soon obvious to all was that AMA Supercross (though still called the AMA/Yamaha Super Series of Stadium Motocross) was taking the place of the Inter-Ams, running a four-round series in ’75 that included Daytona, Dallas, Houston, and the Los Angeles Coliseum. The winner of all four rounds would be New England Can-Am rider Jimmy Ellis—the one and only time AMA Supercross would be won by a North American manufacturer. And here’s an even more mind-blowing stat: Those four AMA Supercross races that Ellis won in ’75 were the first four AMA Supercross races he ever entered!

Here's footage of the 1975 Superbowl of Motocross:

Can-Am was hoping to defend its AMA 250 National Championship title that Gary Jones had won the year before, but at the Daytona SX race Jones badly tore his knee up. The three-time AMA 250 National Champion would miss the rest of the year and never really get back to full form. To this day the 250-class championship trophy for Lucas Oil Pro Motocross is known as the Gary Jones Cup, and right now it’s in the hands of Team Honda and Jett Lawrence.

Before we get into the three national classes that were run in 1975, there was one other U.S. tour that was really picking up steam. The Florida Winter-AMA Series had become the go-to winter training grounds for riders from all over the country. Bill West’s series, which started in 1971, had grown into quite a respected and popular championship. This was in the days before supercross really got big and everyone started focusing wintertime on getting ready for the stadiums. West would eventually become a national promoter, as well as an AMA Supercross promoter, but in the 1970s his Florida Winter-AMAs were every bit as big as the AMA Pro Motocross Series.

The ’75 AMA Nationals began on April 6 with the Hangtown Motocross Classic at its old Plymouth, California location. It was a 125/250 National, and an absolute mudder. Tim Hart knocked off heavily favored Marty Smith to win the 125 class on his Yamaha while Kent Howerton won the 250 class aboard a Husqvarna. It was the only 125 National of the seven run that season that Smith did not win. Smith would also win the first-ever U.S. 125cc Grand Prix of Motocross at Mid-Ohio, and in the process basically invent the double-jump as we know it, but that’s a story for a different time.

How muddy was Hangtown ’75?

Beyond the first race at Hangtown for 125/250 riders and the last race in New Orleans for 125/500 riders, the rest of the 250 and 500 rounds were stand-alone races. And riders could switch classes from time to time. Smith ended up riding at least one race in each of the three classes during the season. And “Jammin’” Jimmy Weinert ended up winning the 500 title (this time aboard a Yamaha) and also finishing fourth in the final 250 standings.

The 500 class went down to the very last round in New Orleans with five different riders still in contention for the title: Weinert, Howerton, Suzuki’s Billy Grossi, Maico’s Steve Stackable and Honda’s Pierre Karsmakers (who’s points counted again after the AMA’s ridiculous decision not to allow him to score points in ’74). Weinert would win the final round and the title. A documentary movie was made about the battle going down to the last round called “One Chance to Win” it’s not on YouTube, but you can buy it for $14.95 through Pipeline Digital Media.

Check out the “One Chance to Win” trailer

One other note to that 500 championship is the fact that Brad Lackey was still over in Europe chasing his dream of becoming the FIM 500cc World Champion. At the end of the ’75 Grand Prix series, at the last round in Luxembourg, Lackey won a moto for the first time. One week later he was back in America and lined up for his first AMA Pro Motocross in two years, the Lake Sugar Tree National in Axton, Virginia. He went 2-3 in the motos to score the overall win from moto winners Steve Stackable and Marty Smith.

As far as the 250 class goes, Pennsylvania’s Tony DiStefano, now on a factory Suzuki after racing a CZ the previous two years, took his first of what would be three straight 250 National Championships. Tony D. beat a very competitive Kent Howerton by 30 points to add this crown to the one he’d won in the last-ever Inter-Am tour. If 30 points doesn’t sound close, remember that in 1975 first overall paid 150 points and second place was 120 points, so that 30-point difference was basically a single position!

Tomorrow, we will look at 1976 in our MAVTV+ 50-Day Countdown and be warned: A Hurricane is coming out of seemingly thin air!

Also, special thanks to the Cycle News Archives for giving us excellent reports and resources on the races from back in the day. If you’re a moto history fan, $4.99 for each decade of newspapers on your laptop is a bargain!