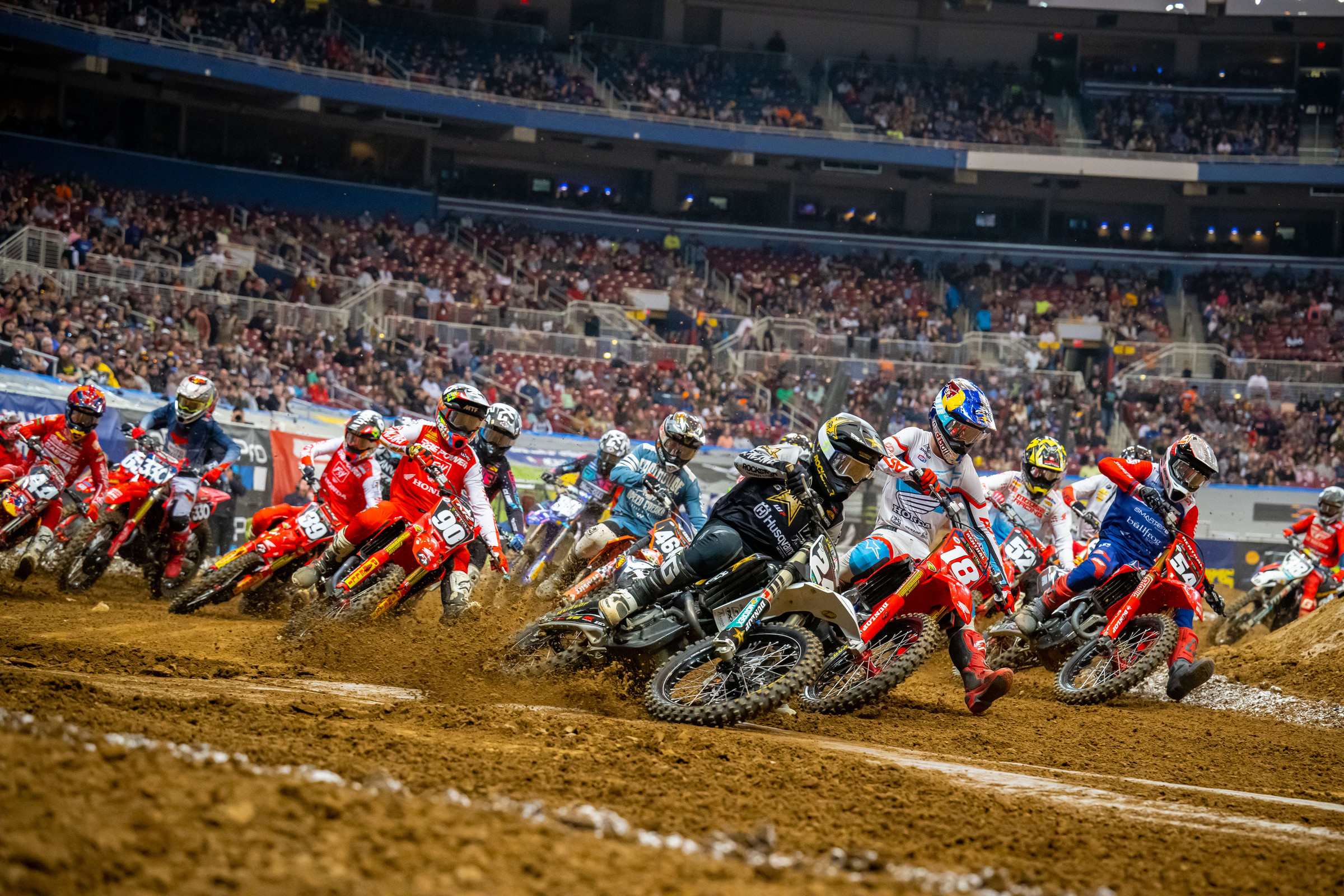 When the Triple Crown format first launched in Monster Energy AMA Supercross we prepared for chaos and unpredictability, expecting short, intense races and wild swings in results. Instead it plays out the opposite, as averaging out three scores over a night helps the best rider win, and one crash or bad start doesn’t ruin it all. That’s why Eli Tomac, not known as a starter or a sprinter but definitely a rider that can win traditional 20+ 1 supercross main events, is also the most successful rider in the short history of the Triple Crown. The best rider will win out on average, most of the time. It happened again in the 450 class in St. Louis—but this time the best rider was a surprise.

It was Red Bull KTM’s Marvin Musquin who grabbed it on this night, and he earned it even more than his 2-1-2 scores would indicate. The veteran loved the track and rode well in every race. Marvin loved the dirt and the tight technical sections, and with it he’s the fifth winner of the season but the first new winner since Tomac took round four. This victory also snapped Tomac’s five-race win streak. Tomac didn’t get the starts he needed in the first two races and wasn’t able to come through as effectively as usual. Musquin found the battle for the overall between himself and Honda HRC’s Chase Sexton. Sexton dominated race one after getting a holeshot, but his start was off in race two and Musquin won. In the third race Musquin started ahead of Sexton in second, and by the time Sexton got to third he was 2.5 seconds down. Sexton actually lost ground from there and Musquin held strong to the end to take the second place and the overall win.

“To be on the podium a few times was my goal, to get a win, to be honest, it was not expected,” said Musquin. “Maybe the people around me will be mad and me, and I need to believe in myself more, but these guys are fast and they’re fit and everyone works hard.”

Musquin praised the dirt and the technical nature of the track, with a rutted, tight off-camber corner that was easy to get wrong. He wasn’t perfect every time but he was better than most, and that paid off. After the race Musquin cited how he now knows that revamping his program—leaving long-time trainer Aldon Baker and joining former SX race winner David Vuillemin—was a good one.

“Changing my program this year was a big test to see if it helps,” said Musquin, who does not have a deal for 2023 yet but continues to indicate he would love to come back and race supercross next year. “At the same time it [the win] helps to prove myself.”

Sexton was second overall and happy with it considering all the huge crashes he’s had this year. “It’s been tough, especially after that last one. I was really down after Seattle. It felt like it came out of nowhere,” he said. Sexton said he did some outdoor riding and then went back to supercross testing and learning some things about his bike. “I feel like I’m back to where I was at the beginning of the season, I had to find some comfort. It’s been a good last week, It was definitely challenging but you’ve got to keep pushing.”

In his post-race television interview Tomac said he made a fork change for the final race to help improve front-wheel traction. Later in the post race press conference he said that, looking back, that didn’t make a huge difference. It was the start that really mattered.

“It was the start,” said Tomac. “I think back to that, yeah maybe I felt a little bit better, we made a fork change, but it didn’t matter. It was just the start. I had a tougher time making up time today. This one was a nasty one again, the whoops were pretty much gone at the end of the night.”

Justin Barcia rode well but a tick off the leaders and ended up fourth overall. Honestly, the St. Louis racing was fairly procedural, without a lot of passing. Barcia was in the mix all night but just off of the podium spots. Justin Brayton was super consistent with 7-7-7 scores, battling his teammate Vince Friese most of the way. Friese was eighth overall. Brandon Hartranft continues his late-season surge with eighth and he even grabbed a great start in one of the races. Ninth overall went to Malcolm Stewart, who had a scary crash in the second race that looked like it buckled his knee. Somehow he was okay and returned to finish sixth in the final race. Justin Bogle had a bad start in the first race and improved in the second two to grab top 10.

RJ Hampshire has made no secret of his struggles with the new-generation frame raced on factory Husqvarnas and KTMs. Well, he got it figured out and rode like a completely different rider at this event. With it, he scored the first 250SX win of his career. Hampshire being Hampshire, though, he had to endure one incident, and he landed on tuff blox while checked out leading the first race. He recovered for second there, then was second behind Jett Lawrence in the second race. Lawrence crashed in race three and that’s all Hampshire needed for the win.

“It was huge,” said Hampshire. “The first five rounds were so mentally draining. There wasn’t much positive, there really wasn’t. Not even one practice. The team worked so hard. I shoot straight, I say what I feel, and these guys went to work for me. I felt good from the beginning. I was P1 in First Practice which I’ve never been I just trusted the bike. My starts were unreal, I think I holeshot every single race. That mistake in the first one, it felt weird, I didn’t even cross rut it just shot me too the side. Yeah we got a little lucky with Jett there in that last one, but we’ll take it.”

“This is unreal. This has haunted me for so long, I can’t even get words out,” Hampshire said. “I had good times in practice and felt a lot more comfortable on the bike. My starts tonight were unreal and you could tell we made a lot of progress because I holeshot every time I was on the track and led a lot of laps. I’m just so dang stoked for the team to finally get one of these. Big thanks to the guys that have been putting in the work behind the scenes. We put it together tonight, it was our night.”

The win streak for the Lawrence brothers is over, as Jett captured the first two race wins but suffered a bad start in race three. He then ran into the back of Jace Owen, who bobbled in the whoops, and went down. From the back of the pack he came back to fifth, and the 1-1-5 scores left him second. Jett still has a big points lead and was still the fastest rider in most of the racing, but starts and one mistake cost him dearly.

“Everyone was taking up the whole track and I was trying to be patient,” said Lawrence. “This layout was pretty simple, everyone was so close it times, it was a thing to see how much time you could make up, just with corner speed. I got pretty lucky in that first race with some guys going down.”

Cameron McAdoo was battling Lawrence for the points lead but crashed out of the weekend on press day. Pierce Brown looked fast all day but got caught in the crashes of others in the first two races, breaking his bike each time. He was super fast in race three, also, taking the lead away from Hampshire, only to crash two more times! All this crashing opened the door for a new podium rider, and the battle came down to Kyle Chisholm and Mitchell Oldenburg. Oldenburg’s starts were on point and he used that to outpace Chisholm early in the night. Phil Nicoletti was also in the hunt, but a crash in the second race cost him a shot at the podium. When Brown crashed late in the final race, it vaulted Oldenburg forward and into the final podium spot.

“The last few years have been tough, and I didn’t even know if this is what I was supposed to do in life,” said Oldenburg. “Thanks to Mike Genova and Tony Alessi for believing in me, because it’s easy to question yourself. This one felt the best, my other podiums I felt like they were expected for me.”