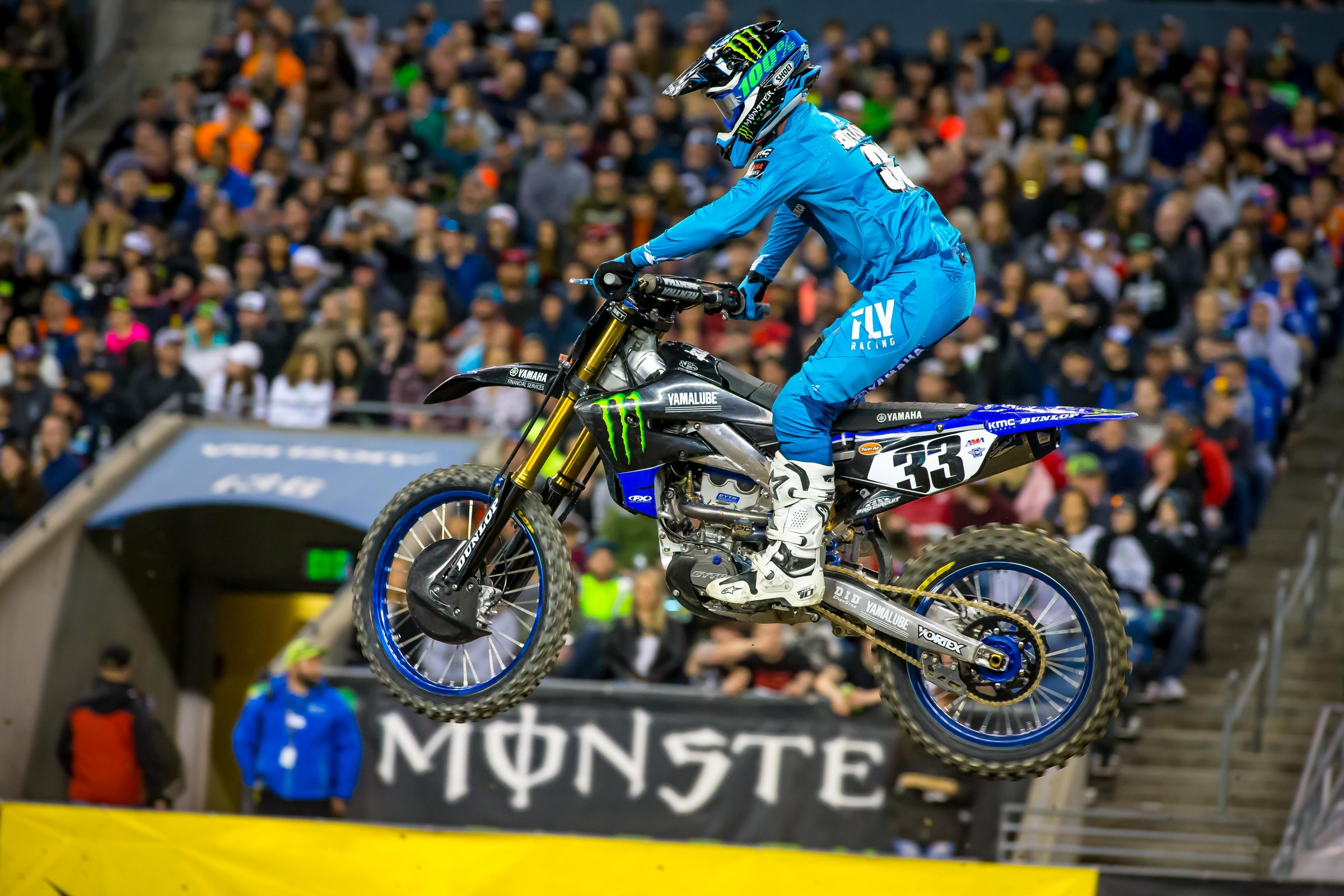 Keep Portland weird is what they say. Seattle’s neighbor to the south has its own culture, for sure, but Seattle itself beats to its own drum when it comes to Monster Energy AMA Supercross. The soil and the weather in the open-air Lumen Field plays a big factor, as does the fact that the race usually takes place closer to the end of the championship, when points are more critical than ever and tension and drama ramp up accordingly. We’ve seen Seattle serve as the championship-decider in 250SX West many times, including a showdown in the mud between Andrew Short and Grant Langston one year (advantage Langston) and a block pass duel between Eli Tomac and Dean Wilson that arguably set the course of their careers to follow (Wilson ran into Tomac, Tomac got him back and put Wilson on the ground, resulting in a shoulder injury. Wilson has dealt with injury after injury since then).

Chad Reed has seen multiple 450SX title bids evaporate in first turn crashes and bad nights in Seattle. Ryan Villopoto got his first 450SX win at this building and began an assault on the class from there. Big things go down in this stadium.

The dirt bikes last took to Seattle in 2019, and as we looked through the archives, we noted plenty of weird things. So much has changed that it feels like a decade since this race, but it was merely three years ago.

Here’s a rundown of the 2019 Seattle weirdness:

Chad Reed was building something with his JGRMX Suzuki ride, collecting an overall podium at a Triple Crown race in Detroit and looking for more. He got a good start in Seattle but uncharacteristically for Chad, he made a mistake just after the start, broke traction and ignited a massive crash. Chad was super beat up after this crash, so bad that he had to rent a motorhome and drive all the way back home to North Carolina due to lung/rib injuries. Justin Brayton and Kyle Chisholm also went flying. These are three of the more steady hands in the series, all claimed in this crash. Although, as mentioned above, the first lap of Seattle has often been unkind to Reed. One could argue, by the way, that this was Reed’s last great shot in supercross. By 2020 he was back to building his own privateer program and fighting through injuries at the start of the year.

Marvin Musquin won the 450SX main, but it was not that simple. He jumped through a red cross flag (from the massive pileup) and took on a penalty after the race, losing the points-equivalent of two spots. At the time of the race, though, not everyone knew how the rulebook worked, and the live NBCSN TV broadcast ended without knowing if Marvin’s win would stand, or if Ken Roczen, in second, would vault into the top spot. Musquin is still considered the winner of the 2019 Seattle Supercross, but that didn’t seem clear at the time.

Dylan Ferrandis won the 250SX class, his first career supercross win. That was a nice story, but no one knew what this would lead to: Ferrandis caught fire, won some more and rolled into the Las Vegas 2019 finale with a slim shot at the 250SX West Championship. Then Adam Cianciarulo crashed it away at the final round, and Ferrandis scored an improbable title.

The factory Monster Energy Yamaha squad hired Josh Grant as a fill-in rider for the rest of the season for injured Aaron Plessinger, beginning in Washington. Seriously, few of us on staff ever remembered this until we saw the pics. Grant crashed in the whoops and didn’t qualify for the main, but he did return to go 20-21-9-8 over the final rounds to end his professional supercross career.

Would-be 2019 450SX Champion Cooper Webb had a six-week run of podiums in '19 that ended because he finished fourth in Seattle.

There was much more to talk about, including the fact that the whoops were shockingly long for a track that usually breaks down so much. Enjoy the highlights from Seattle 2019 below. Feels like forever ago!