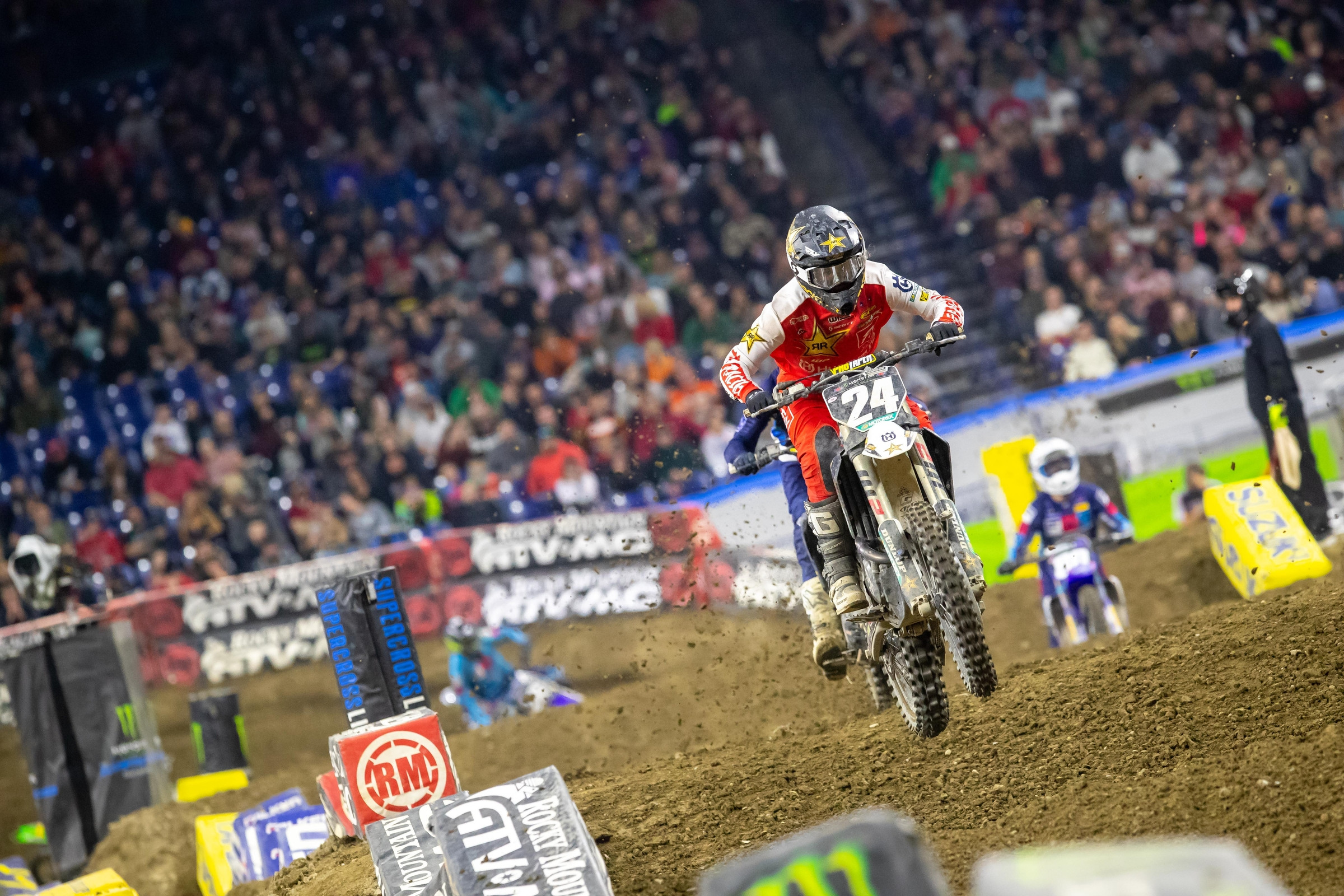 Following 5-16-7-4 finishes in the first four rounds of the 2022 250SX East Region of Monster Energy AMA Supercross, RJ Hampshire finally landed on the podium with a third-place finish at the Indianapolis Supercross. Hampshire barely held off Pierce Brown at the finish line for the final spot on the podium and although later admitted this is not where he wants to be, he said this is a step in the right direction. The Rockstar Energy Husqvarna team is dealing with an all-new FC 250 Rockstar Edition motorcycle—completely different from the previous generation—and in the post-race press conference Hampshire admitted to struggling finding consistent comfortability and trust in the new machine through the early rounds of the championship. Here is what Hampshire said to the media after the race.

RJ, after the season we’ve had so far, does this result feel good? Does this feel like something you should have had a long time ago? Is it kind of bittersweet? Where are you at with this one?
RJ Hampshire: Honestly, it was another night of survival. Honestly, we were just trying to get out of here with a podium. I had another weekend showing up not really trusting the bike or really knowing what it was going to do. We’ve been changing a lot trying to find something just to give me some comfort back. You can tell I’m not all there yet, not trusting it. With these two guys [Jett Lawrence and Cameron McAdoo] through the whoops, that’s all trust and confidence and kind of knowing what your bike is going to do. Right now I’m not there. It’s good that we have this little break now. We made some progress last week with it. I just haven’t had enough time on it. Today was the first day on it. So, get a couple good weeks and hopefully we show up at St. Louis and we’re better.

With the motorcycle, you’re saying not so much about trusting it. Is it a chassis thing? Is it a suspension thing? Is it just you didn’t have that much time on the bike before racing started? What are the main factors that you are struggling with with the bike?
It’s a whole package. We got it in December. I wasn’t comfortable from the beginning. We tried to figure some things out before we went racing, which is why I raced the East Coast. Thought we had it a little bit figured out, and then once we showed up at round one we knew we weren't there. Then we were just kind of chasing ourselves from there. We actually were focusing more on a chassis issue, or just trying to change the chassis to make it more comfortable and we actually found out that something else was kind of causing a bit more of a problem than what we thought. So, that’s what we figured out this week. When the whoops were good, I actually felt like I had pretty good traction and drive through them, but I kind of set my bike up for the whoops that we have been having and that was not the case tonight. We were kind of back to square one and just get through the night. For how it’s been the first four rounds, just to get out of here with a podium and for how hard the team is working to figure this thing out, it was much needed.

We’ve been riding on the media side, the new stock Husky this week. It has a very different engine character than the outgoing bike. I’m not necessarily saying better or worse, it’s just very different. I know you talked about trying to trust the bike and some of it not being chassis. At your guys’ level, trust in how the bike responds is pretty important. Has any of it been engine character for you guys, or at the factory level, and are you guys just pretty much dialed in there?
No. It’s a new bike, so I feel like a lot of guys go through this, a lot of teams go through this. It’s nothing new. It’s just learning the characteristics. Like you said, it’s a lot different than our old bike. It’s much different where the weight is at, how it rides. It’s tough to give you an exact answer, just because I was kind of our test guy for this bike. We don’t necessarily have someone that’s dedicated just to this 250. So, we were trying a lot of things and that’s kind of what we have to do right now. We don’t really know what the exact answer is. It’s not just the bike. It’s my riding, too. Once I trust the bike, I should be able to at least battle with these guys. But for tonight, I had to just stick with what I could do. That literally was it. I would never three. I never went three-four after the whoops in the main, and I was doing that all day. But, I just knew I could do that every lap, so that’s what I did. I didn’t even attempt to blitz the whoops because that probably wouldn’t have ended good. Just learning, getting some time on it. We made progress. These guys are working hard on it. I’m pretty confident we’ll be better whenever we come back here in St. Louis.