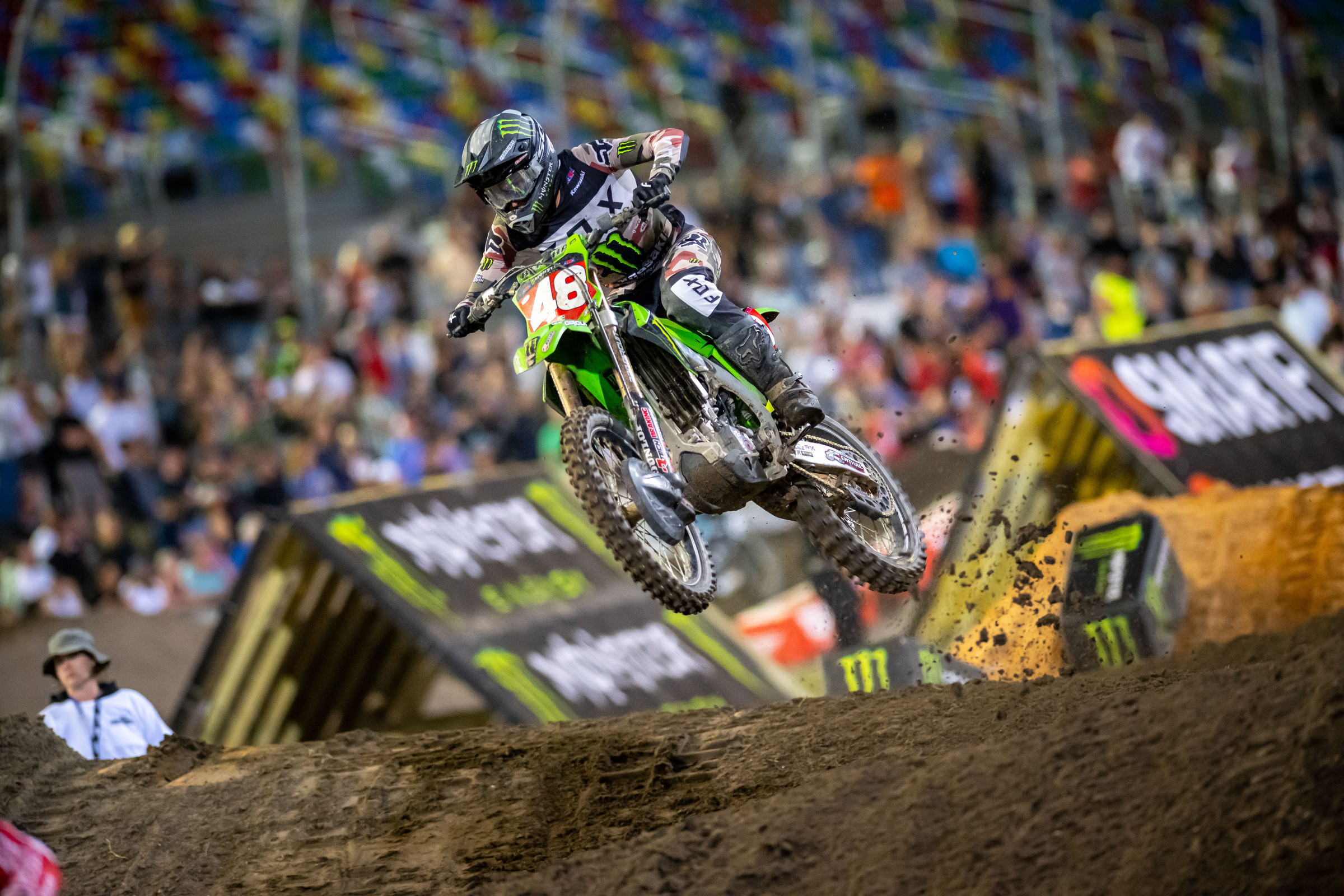 Monster Energy/Pro Circuit Kawasaki’s Cameron McAdoo came to Daytona, the place of his first career victory a year ago, with a share of the championship lead in this early 250SX East Region campaign. Despite a great charge in the main event, McAdoo watched as Jett Lawrence won the race and snatched the points lead away from him as well. But McAdoo’s third was solid given that he actually did some damage to his knee in his heat race and explained that he was having some trouble with it all the way up to the main event. He gritted it out and fought up to third place on the night to remain just five points down of Lawrence. After the race, he spoke with the media in the post-race press conference about his evening.

Cameron, when I saw you on the podium you were struggling. Where did this injury come from? Do you even know what the situation is? How did you get third with that?
Cameron McAdoo: It actually came from the heat race. I had a slight little mishap coming underneath the tunnel. I was going inside, double, double. My knee kind of bent super wrong, and then I lost my pegs. After it already had tweaked backwards, my foot peg came up underneath my knee brace cup and dug into the bottom of my knee. So, at first, I was super concerned after the heat race. I was super unsure. I just had a knee injury last summer. So, it was kind of feeling a little unstable. I was pretty nervous. I had Dr. G [Dr. H. Rey Gubernick] come over and help me out with it. He taped it up a whole bunch. It obviously swelled up a ton immediately. I think it’s pretty much just from getting smashed. Once I got it moving around on a spin bike a little bit. Honestly, I was super unsure what it was going to be like. So that’s why on the sight lap I went out and actually rode the sight lap and hit the jumps. It's strong. I don't think it’s anything that’s going to affect me long-term. I think it’s a lot of swelling that we’re going to have to get out of it this week, but I think everything is intact still. So, that’s a big relief.

You and RJ [Hampshire] had some hellacious battles, heat race and main event. I don't think any of us in the media can say this year that the Daytona track disappointed or was difficult to pass on. Just talk about the track conditions, the racing. Obviously, you wanted to win, but insane battle tonight. Great racing.
Yeah. RJ and I were right by each other both the heat race and the main. I had a really bad start, but once I got up to those guys, the track was so back and forth. It came back across itself almost. It was gnarly. You kind of jump into each other a little bit. We were battling really hard. I would cut back under, and I would get up next to him, and then he was up the inside of that next turn. It was a lot of right, left, right, left. So, it made for great battles. As a rider it was a little stressful and it was sketchy, kind of, to battle that hard at that high of speed. But it was great racing. We diced it up pretty hard for probably six laps, at least. It was a big fight.

You sort of alluded on the podium that the whole day was a bit off for you. Were you just not feeling it today? Were things not really working with the bike setting? That seemed to happen before the injury. Was it just an off day?
Yeah. I don’t even know if I would want to say it was the bike. Last year I came here with pretty much the same bike as I’ve been riding all season, and that’s what we did this year again, for the most part. I was really struggling with comfort. There was a lot of different lines going on that was like each practice, an inside would be fast. We’d watch the film, and then I would go for that line, but then that time the outside was faster. So, I wasn’t really trusting my instincts, is what I would say. I was going off of what the last practice was faster, and then the track was changing. There was a couple rhythms that I wasn’t super comfortable with in practice. Honestly, the rhythm after the finish line, I never jumped that triple over that big one in practice once. I watched film in the last practice, and I was like, yup, in this heat race I’m going to need to jump that the first time. I have to jump it to have success tonight. So, just little stuff that I was kind of struggling with. It was getting pretty frustrating, and then I had a fairly frustrating heat race. So, it was really important to be able to lock in and fight hard to be here talking to you guys.

What did you think about the split lane? Obviously when you are battling with Pierce Brown and RJ, you guys were all going in all different lines. What did you think about the split lane and what was your mentality? Did it change lap to lap?
Honestly, I was pretty surprised at how equal it was. I think going inside outside might have been… I don’t even think it would have been one tenth faster. It was maybe a tad bit, but it was all about just how you hit it. I was just trying to go opposite of whatever they were doing. I was like, I can’t follow these guys. I knew I was faster in the whoops, but if I got up next to them in the whoops on the right side of them, they were going to guard me on going inside, outside. So, I knew I had to get all the way next to someone on the right to make it happen. I was going everywhere. I think I probably did the opposite side of each of those every other lap, it seemed like. Then you come over the tunnel and you’re right next to each other. It was a good split lane. When you make one, usually it’s pretty hard for the track crew to make the split lanes super equal, and I felt like it was as equal as it could have been.

You obviously have a lot of pressure on yourself to perform, but with Monster Energy/Pro Circuit Kawasaki, you potentially being the last rider on the team, is there some sort of more team effort on you as well to go out there and perform? Is it something you notice a little bit more being the only guy under the tent, or is it just a normal day?
It’s obviously a lot different. When our coast started, it was supposed to be three guys – three riders in the locker, three mechanics, three bikes. It’s a lot different. But at the same time, we have the same goal in mind. My goal has been to go fight for wins and fight up front and do my best. The team doesn’t put any sort of a different pressure on me. I think if anything I put the pressure on myself of winning and having some success. Whether we have a full team or not, I’m going to go do my best to show out for our team and to get the results that the whole team has worked for. It’s definitely a different vibe, but I’m just out here to do my best and to give everyone what they’ve worked for.