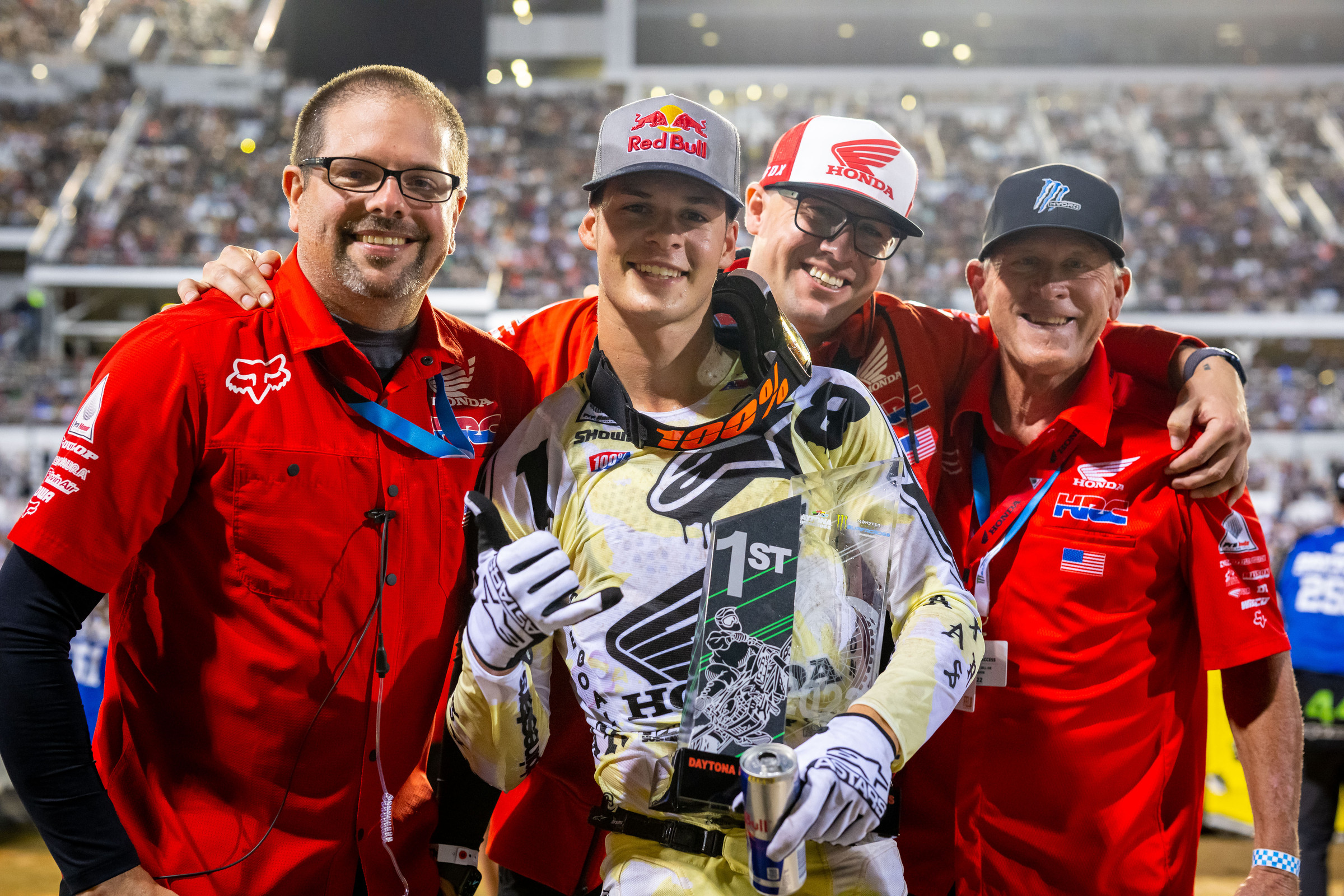 Saturday night was Jett Lawrence’s first go round at the Daytona Supercross. The extremely unique supercross race that halves the Monster Energy AMA Supercross calendar each year is often one that takes a bit of getting used to. Not so for Lawrence though as aside from mistakenly thinking he took the checkered flag a lap early in his heat race, it was a near perfect night for the Australian. His second victory of the young 250SX East campaign broke a tie between him and Cameron McAdoo for the points lead as the series heads into its mid-point swing next. After his win, Lawrence spoke with the media via Zoom about his Daytona experience.

Jett, Daytona is a big one. A lot of attention. You can kind of feel it all week long. For you, there’s races you want to win. You’d love to win them all, but how special is it for you to win this one, with all the hype around it and the attention that it gets and the history that it has? What’s it feel like?
Jett Lawrence: It’s a cool experience. I think even without winning it the first time here, I think it’s a great experience to have just with the fans being there. It feels as close as we can get to feeling like a NASCAR race, almost. It’s in the same area. We might not be going as fast, but it’s definitely damn close. It was a really cool experience. Always a kid, I’ve been dreaming of at least riding this Daytona track. I think today just really topped it off with a win, so I’m pretty pumped.

If you were to put a rating one through ten on your burnout attempt after, what number would you give it?
I’d give it a three. It was terrible. [Laughs] I almost snapped some guy’s femur through the gate. I thought it was a lot more solid. I went into it and the thing moved back a couple feet.

Quite a few attempts, too, right?
Yeah. I need to work on those if I ever do another one.

Pretty quiet main event for you. You had a decent lead. Tell us a little bit about navigating yourself through some lap traffic, as well as being able to select your favorite line all the way around.
It definitely made my life a lot easier, for an easier night. Stilez [Robertson] was there for a very long time. It felt like it was for more than ten minutes. I could see him out of the corner of my eyes at each U-turn. I knew he was there, and it was good because it was keeping me focused. Those lappers, it was tight, especially on that far other side, the more tighter sections. It was a lot harder to get around them, because we’re using all the track just because it’s so tight. Like what Cameron said, you would cut out early and then they would be in the main line but then you were on the outside the next time. So, I kind of got a little bit screwed a couple times. Got stuck behind some lappers, but most of the time they were pretty okay and got out of the way. Otherwise, I would start yelling at them. But it was definitely a nice, calm weekend. A lot better than last weekend. At least I can go to sleep easier tonight.

You had a crazy weekend last weekend. Are you feeling the effects of any of that crash this week?
No. I got very lucky with that crash and landed in some soft stuff. I hit my chest pretty hard, at that point. It was more like it hurt two laps after the crash. I felt it a little bit later that night. Next day I was a little sore, but all this week I’ve been perfectly fine. Breathing-wise I’ve been okay. Didn’t really get too affected, to be honest. My riding, it didn’t really put in a dent in that. Riding has been feeling really good. The bike has been feeling very forgiving and wanting to go fast, which is always nice. Felt safe on the bike. So, I don't think it really affected me much last weekend from this weekend.

Talk about that white flag incident where you obviously thought it was the checkered. Then coming back to it, when you finished, was that the flagger that you went back to and hugged afterwards that was waving you on?
Yes. That was definitely not one of my brightest ones, you could say. I thought I was finished. I looked at the flagger and I’m like, he’s looking a little agro right now, yelling at me. He’s waving his arms, waving the flag like, “Go, go, go!” I look back and I see Stilez landing on the finish line and just dump the clutch. I’m like, oh no! Get going! So, it wasn’t my brightest moment, you could say. After the race I went up to the two guys like, “Who was the one who was telling me to go? Because that saved my life tonight.” So, I kind of screwed some of the guys in the qualifying because we were a slower time, so that’s my bad, I could say. I did give one of the flaggers who was waving and telling me to get my ass going, I gave him a hug and said thanks to him.

Direct Motocross, our colleagues up north in Canada, happened to catch Lawrence hugging the flaggers.