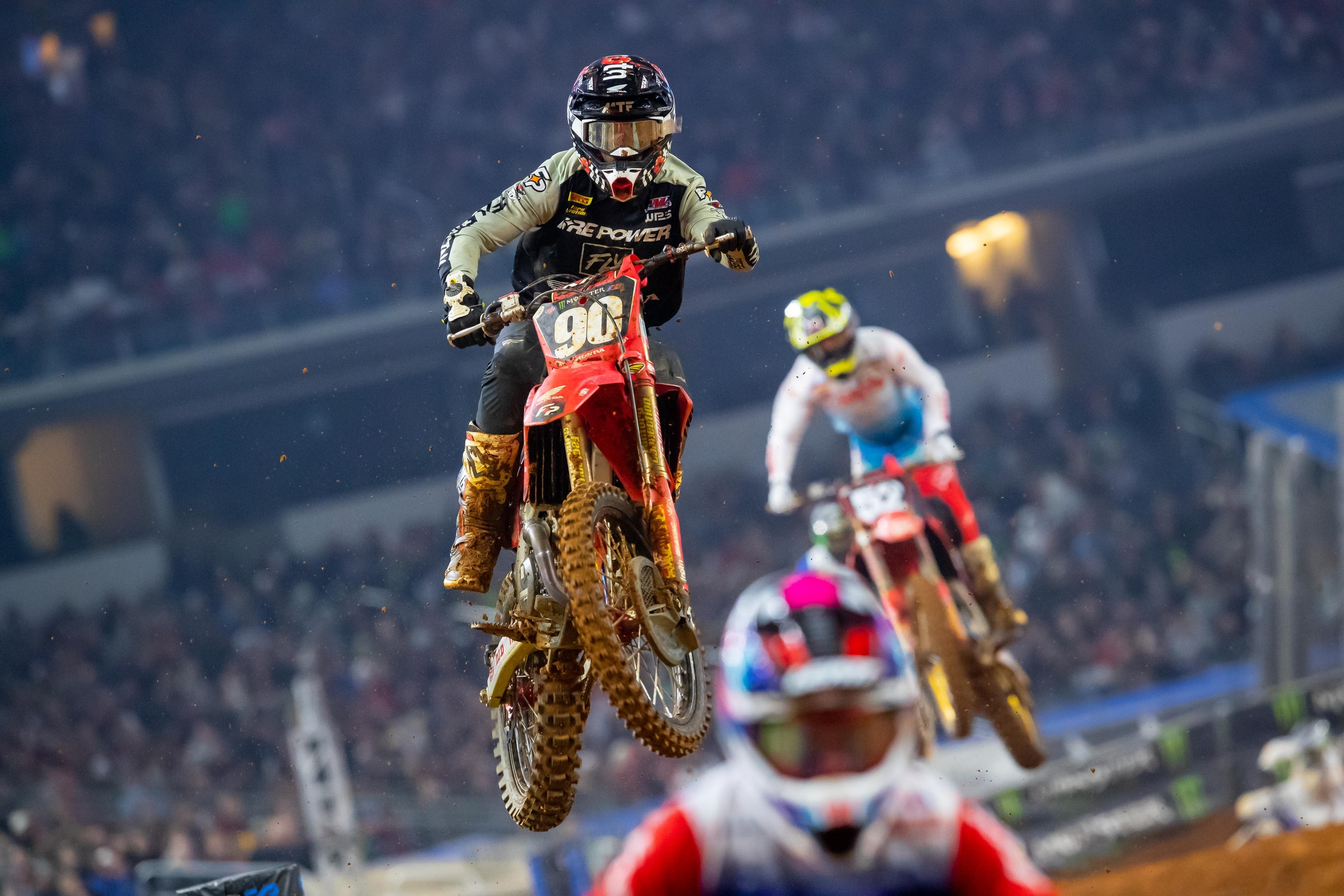 Jordon Smith had a nice rebound ride in Arlington, Texas, to finish fifth overall after crashing in the main event in Minneapolis and ending up 13th the week prior. It was a great ride, especially considering Smith hasn’t raced since getting hurt halfway through supercross last year. We gave Smith a ring to get more details on his night in Texas, as well as his general approach to racing in 2022.

Racer X: Jordon, what’s up, nice ride over the weekend, fifth place in Arlington. Take us through the night.
Jordon Smith: It was a pretty good night; I was happy with the overall finish. I definitely didn’t ride to my full potential throughout the night. I was struggling with the track a little bit and didn’t ride with the same amount of comfort I’ve been riding with in practice. I think it’s going to take being at the races a little bit more to get that comfort back. Once you get to the racetrack it’s different. I was really happy to have a Triple Crown so early in the season. It was almost like running three main events in one night, so it was good to get those three gate drops, and that feeling of battling.

That’s a really good point, I never even thought of it that way. It’s almost like you’re four races deep now.
It is. I’m not usually a fan of the Triple Crowns, but heading into it I realized it was a really good opportunity to get three full gate drops. With the heat races, it’s not that they’re easy, but they’re mellower because the talent is split. It was really good for me to get that Triple Crown out of the way, and I’m feeling a lot more comfortable coming into Daytona.

So, are we going to start seeing you going to LCQs on purpose just to get more track time?
[Laughs] I hope not!

It had to feel good to rebound into the top five after the previous week.
Yeah, that was really good. I think I actually rode a little bit better in Minneapolis, I just had those mistakes in the main event, which held me back. But it was great to get a top five this early in the season, and to be able to build off that now. It’s been a long time since I’ve even been in the top five, so it felt good and I was happy to walk away healthy. It wasn’t that gnarly of a track, but it was easy to let it jump up and bite you.

You mentioned those mistakes the previous week, which is something I wanted to ask you about. Everyone knows Jordon Smith is super-fast, but then again, you do have that reputation for having things happen out there, which I don’t mean disrespectfully at all. It’s racing, some of it’s your fault and some of it’s not, but is it something you consider?
Yeah, I definitely do. I know that’s what everyone thinks. There are times when it’s not my fault and there are times that it is. Going through the off-season this year I was really focusing on being hard on myself whenever I would make small mistakes at the practice track, and coming into Minneapolis I felt really solid. I rode really well throughout the whole day, and got in that battle and tried to pass [Phil] Nicoletti. I thought we were going to get into each other and I hit those Tuff Blox. It’s really frustrating because I’d been riding well all day, then to have two crashes in the main event, is really frustrating. But at the same time I had that crash with [Mitchell] Harrison last year and I got hit from the right and jumped left into Harrison and I hurt my shoulder. The year before, I got together with [Shane] McElrath in the sand. But in 2017, 2018, those two years, I barely ever fell, ever, in the mains. I know I can do it; it’s just getting that race feel back underneath you and getting that confidence.

So, with all that in mind, what kinds of goals do you have for the season?
To just keep clicking off races. No matter where it is I finish I’ll be a lot happier when I ride to my potential on the night. When I feel good, like I feel in practice, I’ll be where I want to be. Whether it’s on the podium that night, a fifth place, or a win, whatever it is, I know I can finish up front and battle with those guys. I just have to get a good start and do it. As far as the goals go, it’s just to click off one race at a time. We’re going into Daytona, if I get a good start and am running up front I’ll try to get that third, or whatever. If I’m mid-pack, it’s to try to make it back up to that top five again. I just need to click off races that way.

What’s it like having Martin Davalos as a team manager?
[Laughs] Martin and I have been friends for a while, and we trained together the last few years. It’s a pretty good fit. It’s something different he’s never had to do before, and he was extremely stressed out going into the first round, it was kind of funny. He’s been great. I’ve learned from him a lot the last few years, and even more this year. He even helps with testing sometimes, he’s been great. He really knows what he’s feeling, and he’s really good about watching the bike and seeing what it’s doing while I’m riding it. It’s been great having him around, he does an awesome job.

Do you guys ever give him a hard time that he ended up being the manager of a 250 only team?
[Laughs] No, not yet, but if I would have won that heat race in Minneapolis I was going to get on the podium and say I learned from the best, my team manager, the best heat race racer in all of the 250 ranks.

You gotta make sure to keep that one in the chamber. Not to keep talking about Martin, but it’s got to be a big difference when coming from someone like, say, Mitch Payton.
Yeah, it is for sure. Martin is still figuring it out as well. He’s got a lot to learn in his new position. You’re not going to be able to go in and do everything flawlessly in your first year. It’s been a lot of work for the whole team, and they’ve been putting in some serious hours. It’s even different coming from someone like TK [Tyler Keefe of Troy Lee Designs/Red Bull/GasGas] or someone like that. Martin, he was just racing supercross last year at the highest level, so being able to have him at the races is a big asset.

Thanks for your time, Jordon and good luck this weekend in Daytona.
Thank you.