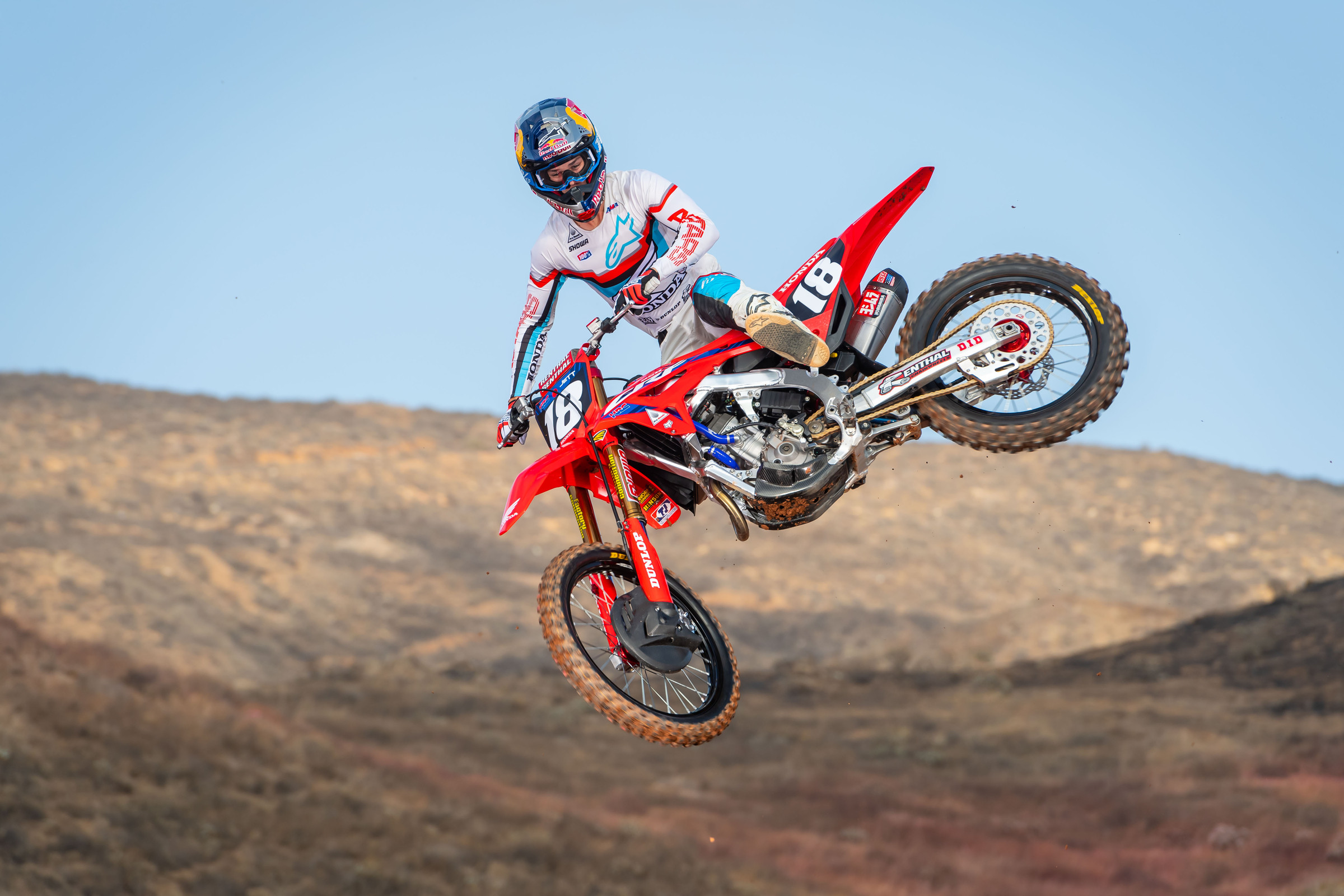 Stacked! That’s definitely the initial feel for 250SX East in Monster Energy AMA Supercross this year. We spoke with ten different riders in last night’s press conference, and we’ll run through the thoughts of three of them in this week’s 3 on 3. Also check out thoughts from Jeremy Martin and Austin Forkner in 250 words.

You usually start in the initial coast of 250SX, this year you got delayed by injury. Where’s your fitness and how’s the new bike?
Jett Lawrence: The biggest thing is I just peaked way too early, even too early before west coast started. I think that little hiccup (rib injury) there was actually good, it kind of whipped me back into line a little bit. I was feeling like superman a bit and it was a reminder, hey, slow down, just put your laps in and don’t do anything crazy. I’m really excited to race, feels like forever since outdoors. I’m excited to get out there with some fast boys.

Seeing your brother Hunter win on the West Coast help pump you up?
Whenever Hunter wins it just pumps me up and makes me want to go back it up. For how much stuff he’s gone through, the low points that not many people know, it’s amazing what he’s achieved since then. I want to get as many wins as I can, but it’s not going to be easy with how many fast guys there are on this coast. Going to be some fun racing.

Last time we saw you at a race you were wrapping up an outdoor championship. Is there pressure to back that up, and how do you use that pressure as a positive?
It’s kind of good to have that pressure, it’s a bit of a dangling carrot, I would say. At least I’ve been in a championship situation in the past until I axed myself again! [Laughs] Then outdoors I was in a battle all year with [Justin] Cooper. I know what it’s like now and hopefully I can use it to my benefit and not make those stupid mistakes and try not to axe myself again! It should be good. I like to have some pressure, it puts you on that edge. I know Jeremy [Martin] is going to be really good this year, I’m excited to battle with him. We had a good battle going at our last race at Ironman and that was awesome. I’m excited to get this season going. You can’t really tell how you’re going to do until you get to the races.

What’s your overall feeling on the bike?
Really good. This new bike has made things pretty easy on me. I can say that testing didn’t take too long, once we found that window the bike has been brilliant. I just feel like a little kid right now, just excited to get the racing started. It’s surprising how much I missed it. By the end of outdoors, you’re like, “Oh man when is this thing going to be done?” But now I’m like, “When are we going to go racing again?” like I’m a little kid. So I’m excited. It was good to watch the west coast races and see how the tracks have been building up. They’ve looked really gnarly. I can’t wait to go racing, bang bars with some fast dudes and have a good time.

What’s it like riding the new bike, and new teammates like Malcolm Stewart and Aaron Plessinger?
RJ Hampshire: It’s been awesome. To be honest we got the bike mid December, and I struggled at first. I wasn’t comfortable at all and we could not figure it out. Wasn’t honestly until we went out to California a few weeks ago, and I feel like we’ve got something pretty solid now. It’s a new bike. I’ve been testing so much, we’re trying everything we can do. I was ready to go race west coast but that wasn’t a good call. Clearly we’re still trying things and trying to figure it out. Did some more testing this week and I feel like the new bike has come around pretty good for me.

You’re now one of the more experienced riders at this. Now that you’re at this stage of your career, how do you avoid getting too caught up in things?
Kind of just like you said, I’ve been around for so long now. I’m in a really got spot where I’m training, the group of guys around me, and where to go with this bike. It’s cool to see. We have two younger teammates, and same thing, kind of bouncing off of them a little bit. Then the whole off-season to spend it with Malc and AP was huge, every day we were kind of close. It’s just getting that race feel. Being able to push but still kind of keep it in control. You’ve got to keep it positive. I tend to be pretty hard on myself. So I’m just trying to keep it more chill and laid back then go and do it at the races. We’ve been really focusing on the starts with this new bike. It’s kind of a good thing we had a lot of rounds on the west coast to learn the bike. All in all, I’ll just try to take the years that I’ve had and try not to throw it away at the beginning.

Coming off of a season where you had podiums, and win and you were a championship contender, how do you use that to make a drive to a championship?
Cameron McAdoo: Yeah last year was the first time I was in that position, being a race winner and a championship contender for the first time. That was my first time dealing with that kind of pressure, and clearly it got to me a little bit towards the end. This year I’m doing my best to eliminate the bad nights. Kind of not let happen what happened at the end of last year. With last year’s experience I think I’ll be a lot more composed with it.

Is the expectation or pressure different knowing this time around your one of the guys from the outset?
I wouldn’t call it an expectation or pressure. I feel like whenever I put an expectation on myself it doesn’t always go right. I think that’s kind of where I went wrong last year. We all work so hard, the goal and the plan is to fight for wins and podiums and be there in the end. I was in it last year pretty well, so that’s definitely the goal, but there’s a big process that comes before meeting that goal. Stay grounded and stay in the moment for each round this year. Three practices and heat race and a main event in nine rounds this year. Just want to stay present and bring the best version of myself to the races this year.