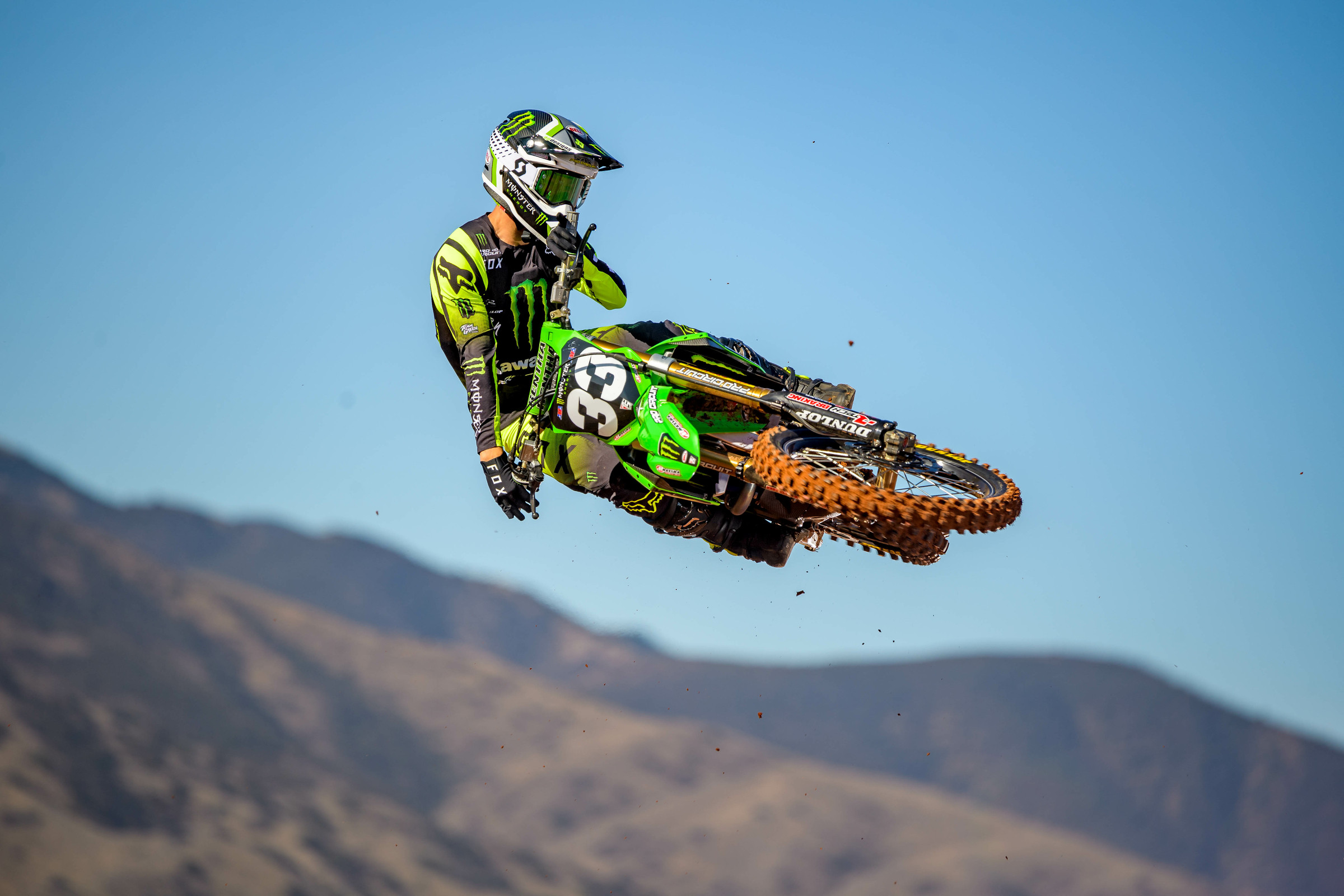 Jeremy Martin and Austin Forkner have been title contenders for years, but it hasn’t worked out for them in Monster Energy AMA Supercross. Both riders know they should be in the 450 class by now. A year ago Martin switched back to his old Monster Energy/Star Yamaha Racing team with a goal of winning 250 titles and finally getting a 450 deal. That didn’t work out. Forkner confirmed that his Kawasaki contract was set for a 450 deal already, but they had to make changes due to all of his injuries and missed time. Yup, it didn’t work out.

So in last night’s press conference to kick off the 2022 season in 250SX East, it was tempting to run the same old answers about finally winning one and finally graduating. It turns out, though, these two have been through so much they can’t say it’s title or bust. They just have to take the races as they come, one step at a time, and actually worry about getting through the series, first.

“Actually this year, it’s my last year in the 250 class so I feel like I should have a lot of pressure on me this year, but I don’t feel a lot of pressure,” Forkner says. “I just don’t. I don’t know if that’s because I’ve gotten hurt really bad, I’ve blown multiple championships…. Then outdoors [in 2021] was just a horrible 12 rounds. I feel like I’ve gone through some stuff and I’m coming into this year not feeling a lot of pressure. Usually coming into the first race by now I’m already starting to feel nervous and stuff. But right now I’m just excited.”

Forkner crashed out of supercross last year by round three with a broken collarbone. He raced the Lucas Oil AMA Pro Motocross Championship but never showed his old speed, taking seventh in points.

“Whatever I did outdoors didn’t work, at all!” he says. “I don’t know exactly what happened. It probably wasn’t just one thing but many things. After the season I took three weeks off, kinda a vacation, didn’t talk about dirt bikes, and when I finally came back I hit a corner track. Robbie [Reynard, coach] said, ‘You look….good! You have intensity. You have drive. You look like your normal self!’ Yeah, I’m amped to ride again. I feel like I can really push, and all those things you can do when you feel good, they were lacking last season. I don’t know. I was saying one thing, that I mainly needed a good off-season to regroup and get motivated. I feel back to normal now.”

Forkner was asked if he changed anything significantly to his program to make a change. He says that’s not really the case. It’s just the overall feeling that’s better.

“I feel comfortable and we made some bike changes that we needed to make,” Forkner explains. “We had a new bike last year and we didn’t have a lot of time at the beginning of last year. I don’t think it’s one specific thing or I feel way better than any other year I’ve come in, but I feel solid, and I fixed the things that I was struggling with outdoors.”

Martin rejoined his old Star Yamaha team last season in the chase for that elusive 250 supercross title. The hype was high, but it ended when he got landed on in the first turn of the first main event.

“I guess my perspective is a little bit different now,” he says. “I think my best finish in a supercross series is third. So, you’ve got to climb the mountain, right? That’s nine rounds. So I’m not going to get ahead of myself. There’re a lot of fast guys in the class and they’re all going to be ready on Saturday. The biggest thing for me is to not be my worst enemy.”

Martin returned for Lucas Oil Pro Motocross last summer despite dealing with a broken scaphoid in his wrist. He kept fighting but the injuries kept piling up, culminating in a broken arm.

“I had to take an Aleve every time I rode, and as the day would go on my hand would fatigue, and sometimes my hand would blow off the bars,” he explained. “It was tough—they had to fix the scaphoid and I also had to fix the radius. Three surgeries actually in one, so I was in quite a bit of pain. Getting back on the bike was nice, but I was obviously a little gun shy. I got back on supercross and I’m not going to lie, I was casing some jumps, it was pretty rough in the beginning. Then I started getting more and more comfortable. It’s been fun. I really enjoyed riding again, it was honestly pretty miserable last year just because I was constantly nagging. No more pain in the wrist and it gets better every day. I’ve been practicing with Levi Kitchen. He’s a rookie and I’m a veteran. It’s kind of cool to see that he’s willing to put in the laps, and he sends it. It’s made going to the track quite a bit more enjoyable.”

The 450 question remains, but this time Martin didn’t even mention it. Whatever happens, happens. Forkner is hoping to finally learn some lessons on a 250 before he moves up.

“I believe I was actually supposed to move up sooner,” Forkner explains. “Just due to injuries and stuff that’s happened I’m still in the 250 class. And that’s fine, if I still need to mature a little bit and I still need to work on things, I’d rather do that in the 250 class and be better once I get to the 450 class. It’s probably the best thing to do—if I’m not doing everything right on a 250 I’m probably not going to do it right on a 450. I feel like I’ll be ready next year if it all lines up. As of now that’s the plan and I think it will work out.”

Forkner has never lacked speed or confidence, but the world has waited for signs of maturity. The downs of the last few years might have allowed that process to take place.

“I was actually just thinking about this the other night, how much your perspective on things changes as you get a few more years in the class, and how different it is when you first come in,” says Forkner.

Instead of coming in overconfident, Forkner has to remind himself that he should be confident.

“Yeah, I feel like I’m definitely still a threat,” Forkner says. “I didn’t have a good outdoor series last year, but supercross last year I got second at the first race after having to come through the pack. Second race RJ [Hampshire] and I came together, but I was running third and trying to get him for second. So, yeah, I still consider myself a threat and a championship guy, running for podiums and things like that. We’ll see whenever we start racing.”

“I think for me it’s exciting, there’re a lot of good guys,” he says. “We’ve done the west coast races and my teammate Christian [Craig] is obviously on fire. This will be good for the fans and for all of us. We’ve all been training and working our butts off. We have a good mix of rookies and veterans like myself. We’re all fired up and ready to go racing.”