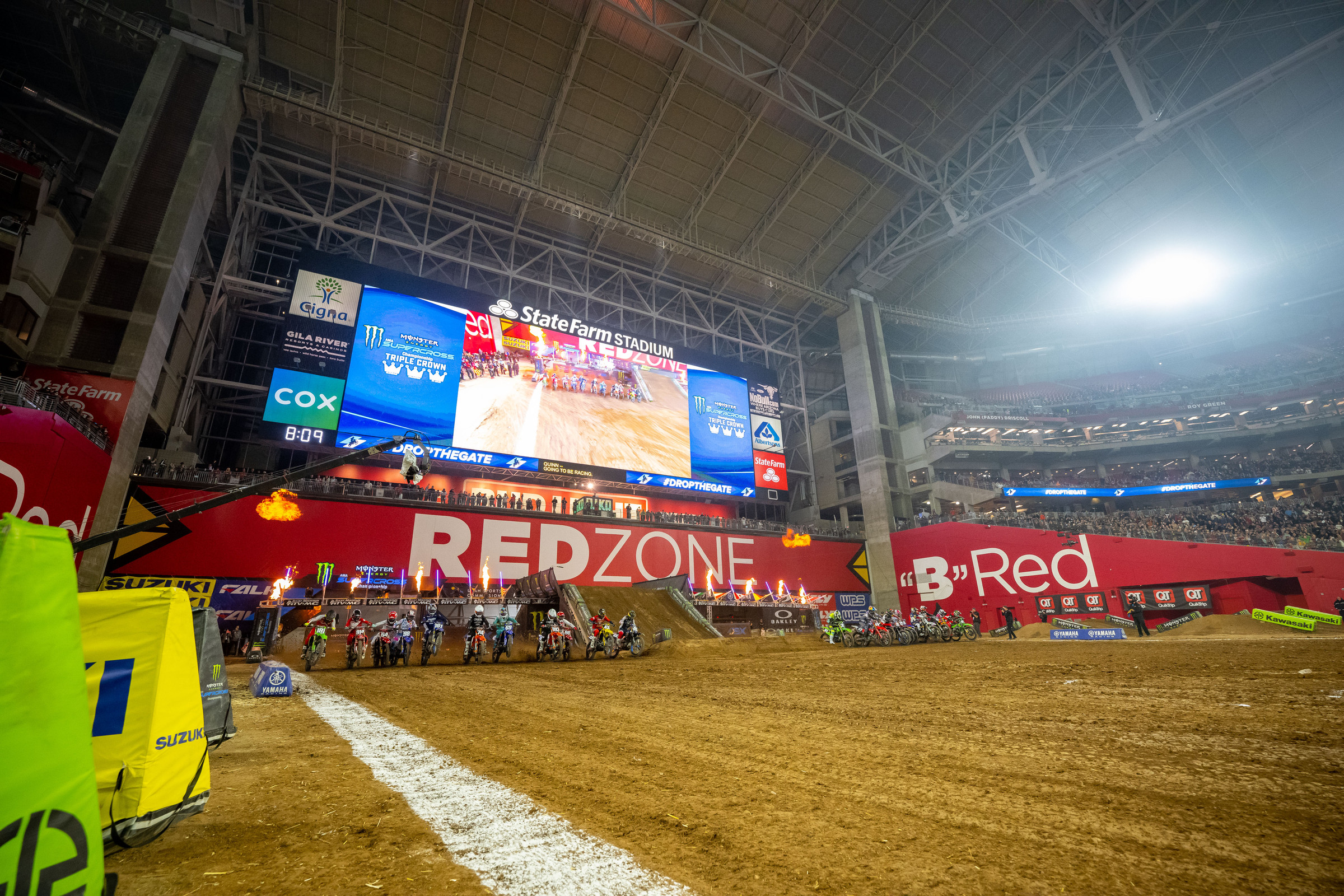 The fifth round of the 2022 Monster Energy AMA Supercross season has come and gone. Both classes provided several talking points from passes, crashes, winners to losers. As such, we fired off some questions to 16-year professional racer Jason Thomas to get his take on all things Glendale.

Let’s rip the band aid right off: what were your thoughts on the Vince Friese/Christian Craig collision on the start of the second 250SX race?

Vince Friese has a long history of controversial moves. I’m not even talking about his pro career going back to 2008-2009. Even his amateur career was marred by moves that left others angry. This incident with Christian Craig was another reminder that he’s the same guy doing the same things, albeit further up the leader board. Simply put, he makes bad decisions on a consistent basis. He has zero regard for others while racing, zero regard for safety, and zero respect for anyone but himself. He made a deliberate decision to commit to a no-win situation going into the sand and we all saw the outcome. I wish I could tell you that this was a one-time mistake in judgment but that would be a lie. He’s the same guy he’s always been, making the same moves he’s always made.

Michael Mosiman had a rough start to the night but was riding well in the second race and then the third race as well before his crash. But this was a tough night for Mosiman in the points. Has this become a two-rider title battle with Mosiman as the first wild card behind Craig and Hunter Lawrence?

I am not ready to declare anything yet. There is too much chaos right now to exclude Mosiman. We were very close to losing the points leader to injury on Saturday night. The front two certainly have a big edge but I’m just watching and waiting until we get back from the long break.

Eli Tomac holeshot and checked out in the first 450SX race. Then he did it again!? He got pinched off in the third race, but he was third off the start! Where did these starts come from?! How much did the gate picks come into play for tonight? Does Eli feel extra motivated know he’s coming to the line in a format he excels in?

There was a lot of chatter about his gate choice and if there was any distinct advantage there. Either way, the starts were significantly better than normal. Is it a result of his increased confidence? Is it a Yamaha power advantage on the long Glendale start? Was that gate simply giving him an edge? I think we will learn more next weekend on this development. If he is top three in next week’s starts, I will lean towards this being the new norm. Remember, his first lap positioning before Glendale was 11-8-3-5 so there was a little bit of everything. It’s trending the right way so maybe they ironed out a few kinks early and we are now seeing what we should come to expect.

With Tomac’s great start to this season, would you be worried if you were his competitors?

I would be extremely concerned. Tomac has been a slow starter that builds momentum and comes on strong late in the season. That’s who he has always been. That has usually created suspense for late in the series as he chases down whoever happens to be leading the points. This year, he has taken the points lead early and even more worrisome, looks ready to extend it. He seems to have every single aspect of his game in check. Extremely. Worried.

Jason Anderson made a costly mistake in the second race, but he was on another level in the third race charging from about tenth to second. Where was he making up this speed?

He just looks like he is a bit quicker in the turns and able to attack the track where others were forced to be more tentative. I also attribute a bit of this to the hard-packed dirt that Glendale presented. Jason grew up in New Mexico and this soil would be typical for what he rode day in and day out. His comfort level would correspondingly be higher than most of the field. You could see that in his willingness to trust the deteriorating traction in that final race. He was turning under most of his competitors and rolling on the throttle earlier than they could or were willing to.

At Glendale in 2020 for the Triple Crown, Cooper Webb finishes 8-5-4. Tonight, Webb went 8-8-5. Where are you at with Webb? He is 23 points down. We have heard the KTM trio is not the happiest with their setup, but where have Webb’s starts gone? How can he turn this around next week before he gets in too much of a hole (if he already hasn’t)?

It’s a critical time for Webb right now. In the first three rounds, the volatility inside the top ten was his friend. He was only one point out of the lead because riders like Tomac, Anderson, and Chase Sexton were having their share of issues as well. The last two rounds have been much more kind to those three while Webb has lagged. That divergence has put a big wedge into the points gap, forcing pressure onto the Austrian contingent (most notably Webb). He needs to show some sort of resiliency at A3 before we head east. If he can swing the momentum pendulum before we leave the West Coast, I think that will be the catalyst for an even bigger swing when we get to dirt he seems to excel on. Giving Tomac a full race worth of points to play with is not something to take lightly. I doubt the mood under the orange tent is anything less than all business this week.

Speaking of holes, how worried are you if you are Ken Roczen? Leaving round five, Roczen is 31 points down from Tomac. Is his “bad sickness” from December starting to catch up to him? How can he turn around his season?

He should be very worried. He doesn’t look right, in my opinion. He is missing something. He isn’t able to hold his legendary early-lap intensity for more than five minutes or so. He isn’t topping the board in timed qualifying. I am not ready to claim what the missing ingredient is, but I am willing to diagnose that “it” is missing.

Malcolm Stewart had a career-best night. You mentioned last week Mookie and Shane McElrath were two riders to watch coming into tonight. Mookie was solid all around all night (great starts & great pace). Can he remain in the top 3-5 spots throughout the remainder of the year? Or is this more something we will see again at the remaining Triple Crown events.

I will be watching closely to see if he can keep this momentum. Rumor has it that the entire group (Red Bull KTM, Rockstar Energy Husqvarna, Troy Lee Designs/Red Bull/GasGas) had a suspension re-think last week. Was that the confidence boost that Mookie needed? Time will tell.

We know you are usually a fan of the longer starting straights, and it appeared the tunnel jump separated the two sets of riders some, too. What were your overall thoughts on this track?

I thought it was great! I thought the dirt could have used more moisture in the final races, but the layout was creative, challenging, and fun to watch. That 3-4-3 that Sexton put together was a real doozy.

And how excited were you with the return of the Triple Crown? The format delivered great racing yet again!

Who benefitted from the Triple Crown format the most? (One rider each class)

I will say Hunter Lawrence in the 250 as his consistency brought him his first win of the season. In the 450, I will go with Jason Anderson as his crashes and results variance were smoothed out by three different opportunities for a race finish.

Who suffered from the Triple Crown format the most? (One ridereach class)

I don’t have any real reasons as to why, but Mosiman seemed to struggle. He crashed in two out of the three races and erased the consistency trend he had been working on.

In the 450, Ken Roczen just didn’t look like he was ready for three races. His first one started well and then it was just a slow degradation from there. I’m not sure what’s up with the #94 but he’s off his best form right now.